Autumn Colours in the Mist

Another blog post from the foggy morning at Yorkshire Sculpture Park.  This time I have pulled together some photographs highlighting the colours of Autumn but still containing the element of mist.

The first few photographs are on the way to the sculpture park.  This first on is on the way through a managed woods which is actively used for timber production so has lots of trees with very straight trunks.  There's no main subject in this image but I just like the colours and textures in the foreground and the way it all fades as you move into the background. 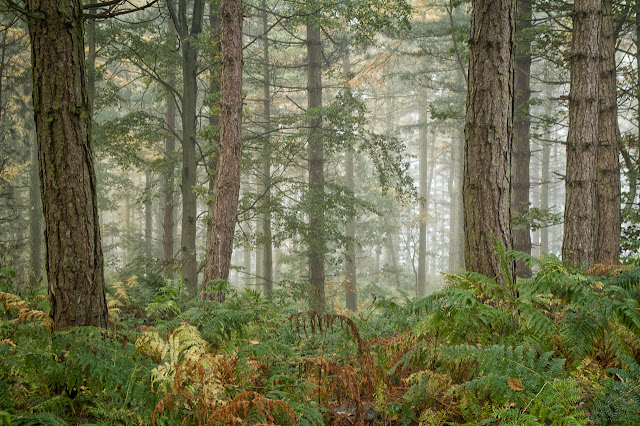 After the woods there are some fields with lots of very photogenic trees which make it one of my most popular shooting locations.  In the background of this photo there is a line of trees which I also photographed this day but it contained less colour than this photograph so I didn't include it.  The tree in the foreground was full of autumnal colour but the one behind was still mainly in the green of summer. 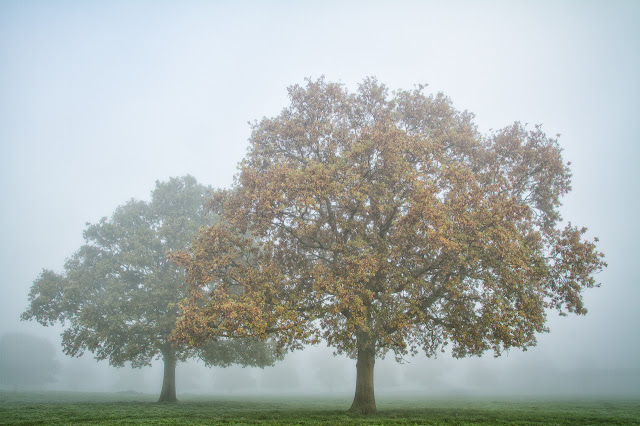 This little tree was also full of colour whereas the large one above and behind has totally lost its foliage. 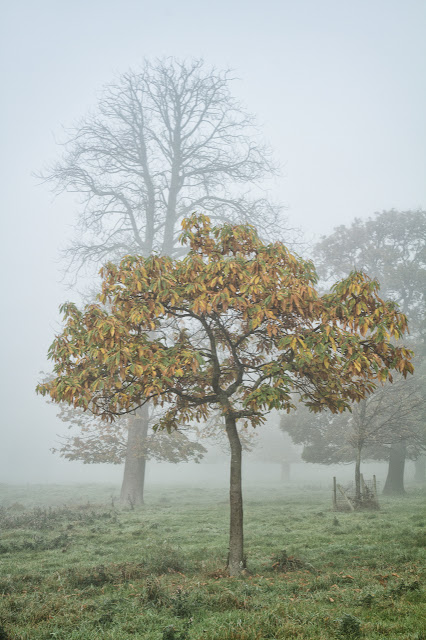 As I walked around the upper lake I arrived at the the sight of the exhibit, Red Path by Richard Long. It was barely visible because of the coating of fallen leaves but you might just make it out in the middle foreground if you look at the expanded version. I took this photograph using my 10mm fisheye lens so I could include the whole of the reddish looking tree near the centre.  The sun was somewhere behind the tree so the colours appear quite subdued and the sky is very bright. 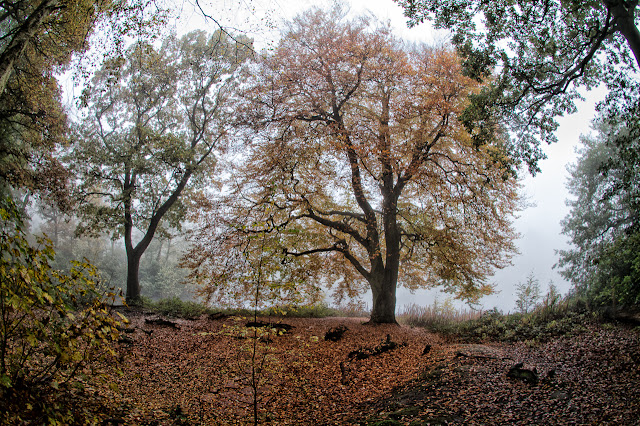 Here's more of a close up of the same tree in the previous photograph.  The phogrph was taken from the other side of the tree and the colours are looking more vibrant because the light was coming from behind me. 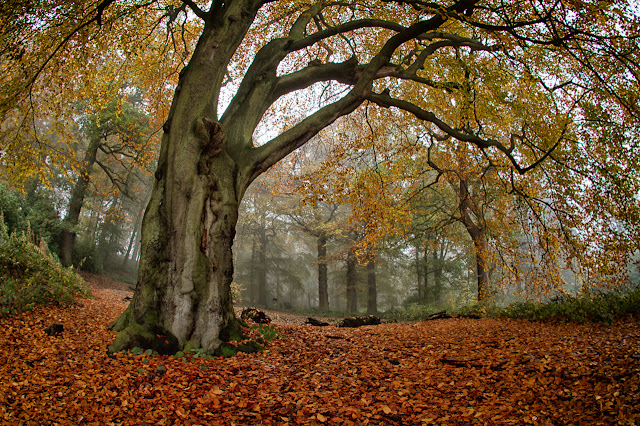 Further around the upper lake a small stream enters the lake through two pipes running under the path.  The fog had turned to more of a slight mist by this time so the colours in the scene had become much clearer. 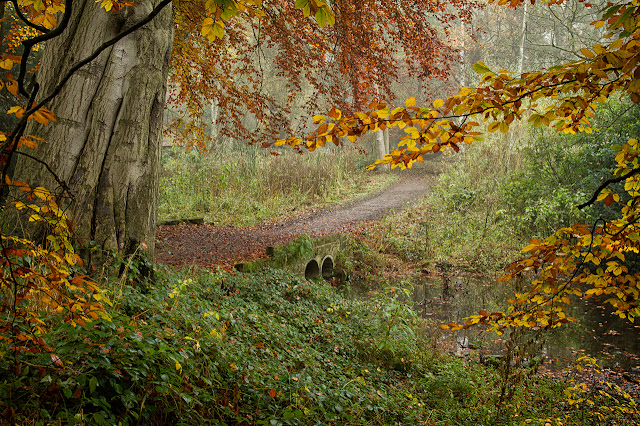 Even further around the lake is this wide straight path which leads back to the bridge.  I would normally take a different path which goes up the hill into the woods but the path had been closed due to work taking place.  I used the piece of log on the path as some foreground interest but love the way the path leads off into the distance before it disappears into the fog. 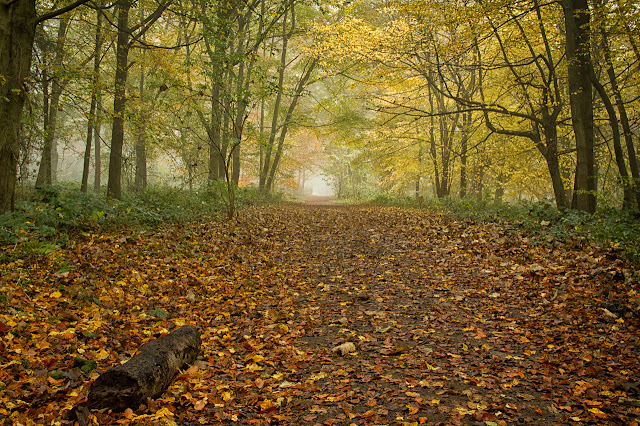 While I was taking the previous photograph this couple walked by me and I thought their inclusion adds some extra interest to this image.  I don't normally feature people in my landscape photographs and go to great lengths to avoid them or remove them in post processing.  Just occasionally though I see a scene which really benefits from the human touch and this is one I really like.  Sometimes I think I should do it more often and maybe I will in the future. 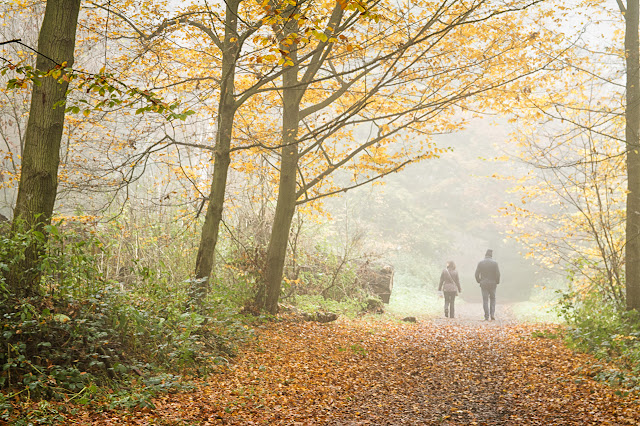 I turned to look back in the direction from which I had come and thought that this made a reasonable composition. 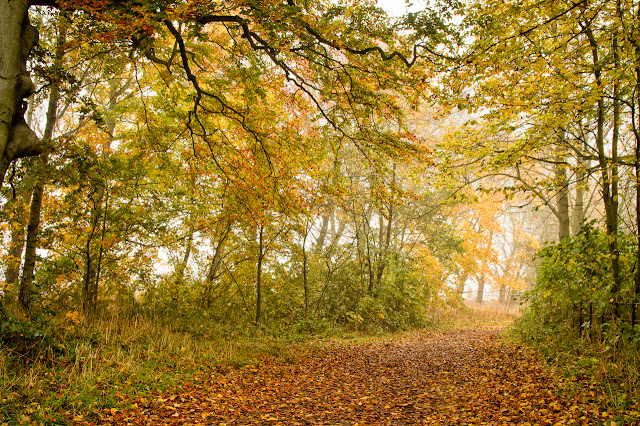 After reaching the bridge I set off up the bridleway that runs alongside the sculpture park and back in the direction where I had left my car.  Again the colours are fantastic and the mist in the distance add a bit of atmosphere to the picture. 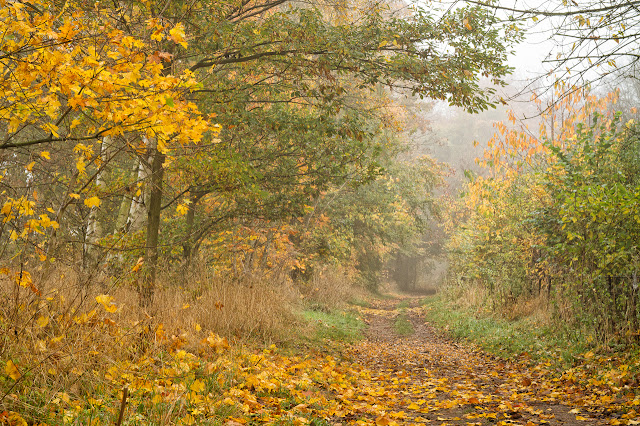 As the path goes up the hill the trees lining the path give way to open fields.  In this photograph there looks like there is a light at the end of the tunnel trough the trees. 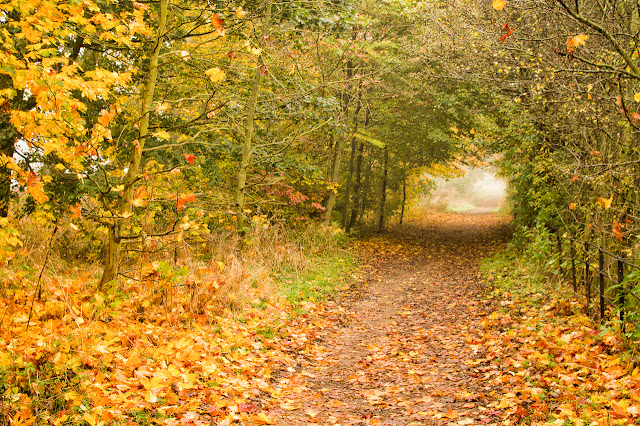 Next time I'll take a rest from trees and fog but I am sure I will get back to one or both before too long.
at December 03, 2015