In my blog recently (July 2011) I mentioned that early on in my new found interest in photography that I had taken a number of photographs of the churches, mainly in the Holme Valley.  I decided to look them up and make them into a gallery page and maybe get myself inspired to get out and make some more fresh images of the local churches.  I was a little amazed at how long ago I had made most of the photos which were back in 2008 and I also found that I needed to reprocess most of them as they'd originally been processed in an earlier version of software.  The other thing that struck me was that many of them were taken in, shall we say, less than perfect weather conditions and I felt an urgency to retake the photos in better weather.

Anyhow here's my current top twenty which I will replace as I get around to revisiting the churches.  These first couple are of a little church in the village of Upper Cumberworth just about 3 miles from home.  The first one I converted to monochrome because the sky was pretty dead and it allowed me to push the contrast a bit more than if I'd left it in colour. 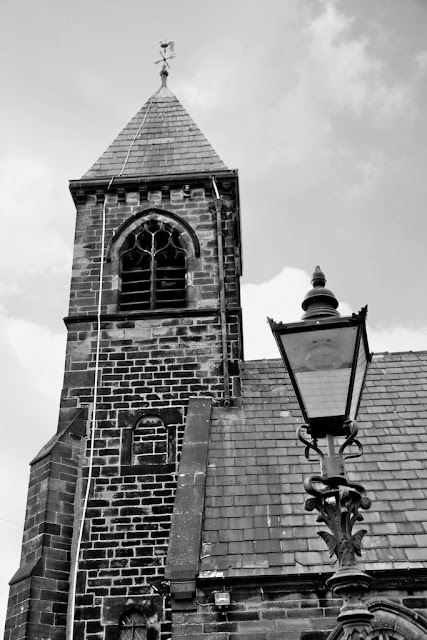 The second image of the church has this amazing stone tree stump in the foreground.  As you can see in this photo the sky was almost completely white which doesn't make a good image and also there is a bit of twig sticking up out of the stump which I really ought to edit out. 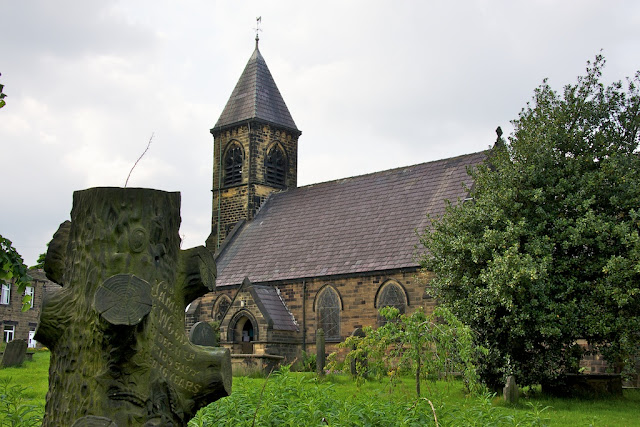 This is the chapel at Clumber Park near Worksop in Nottinghamshire.  It's a beautiful building but this photo was taken with a long telephoto lens from across the lake and so lacks some detail.  When I went back a couple of years later there was scaffolding on the building so I couldn't get a better shot then. 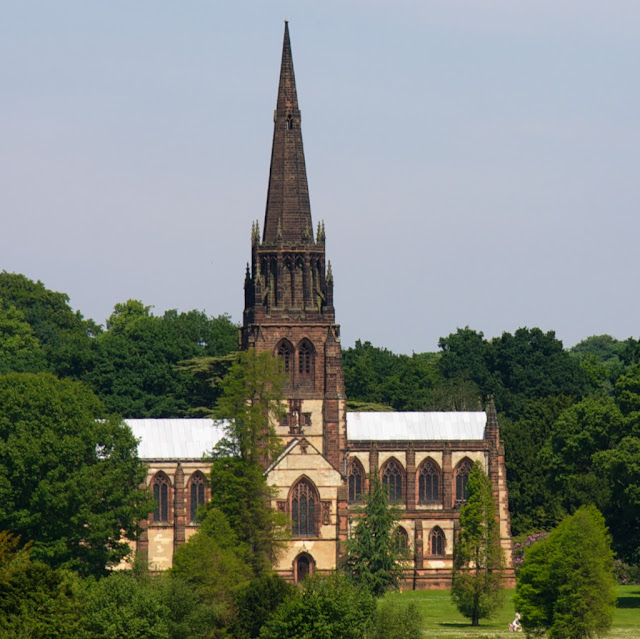 This is Farnley Tyas church which is also a bout 3 miles from home.  This is probably one of my favourite church photos and I have taken quite a few nice photos of this church.  In my study I have a monochrome sepia coloured print in a frame which I took from a few step back from where this was taken. 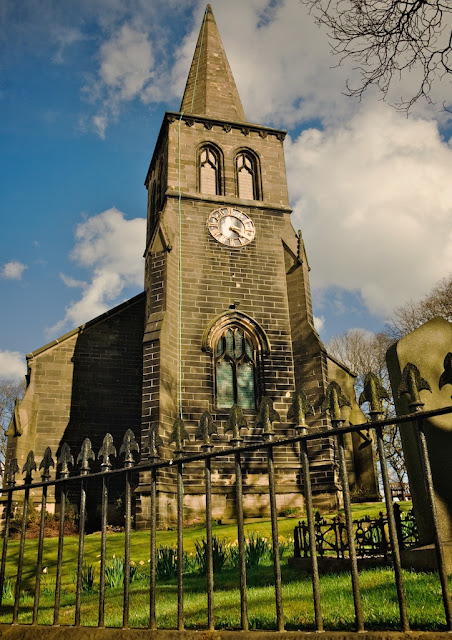 This is my local church at New Mill which I have photographed many times at various times of day and different times of the year.  I need to search through to find some later photographs that were taken when there was lots of snow about.   This photo was taken mid afternoon in spring 2008 before the leaves had returned to the trees with the sun casting shadows and a deep blue sky. 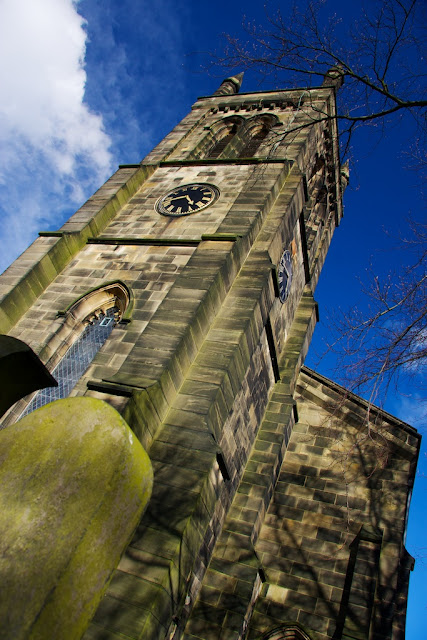 Upperthong church is where Bill Owen (Compo from Last of the Summer Wine) is buried and remembered.  He wasn't born in Yorkshire (I believe he was born n London) but he adopted Holmfirth as his home during the 27 years he spent starring in the television series.   It was another day when the sky was doing me no favours and I need to return when the weather is better. 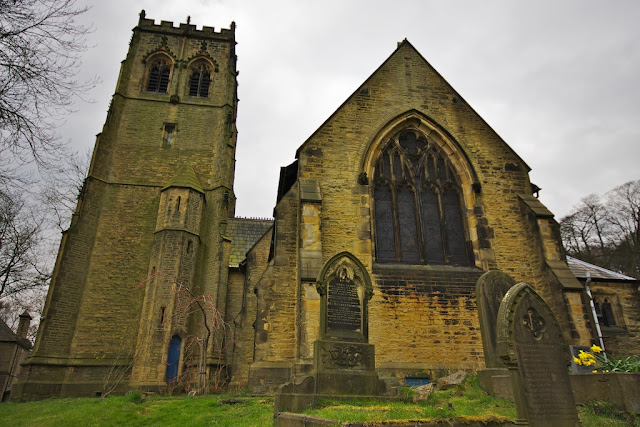 Thongsbridge church is in a quite small plot opposite an big old mill.  It's fairly plain but appears to be well looked after.  The word thong appears in a few villages in the Holmfirth area and apparently is a Viking word meaning a strip of land. 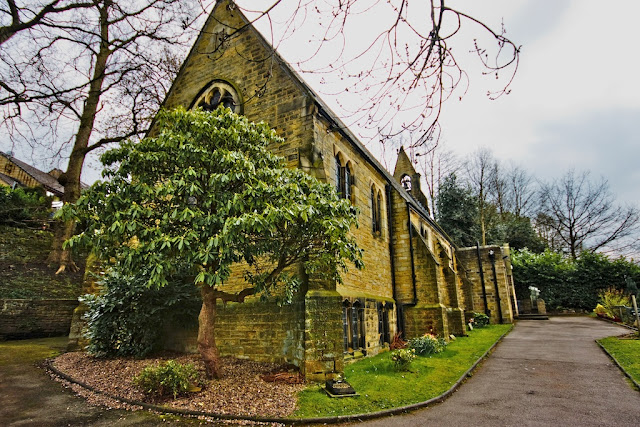 Another thong, this time Netherthong where we lived prior to moving to New Mill.  This church always seems dark and spooky too me as its closely surrounded by big trees.  This photo was taken when the trees were bare of leaves so a bit of sunlight can get through to the building. 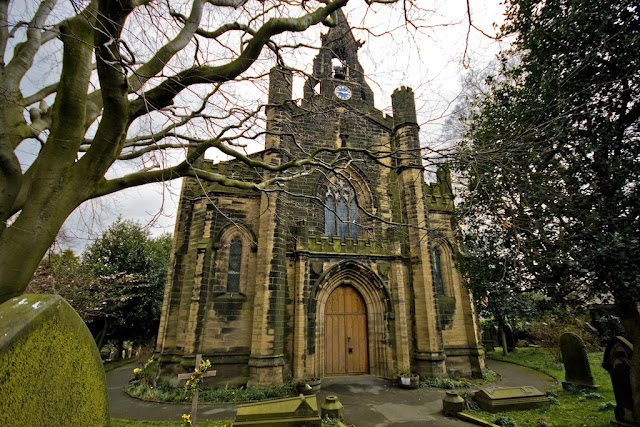 Next is a couple of photographs of Willshaw church which is a tiny village between Holmfirth and Meltham.  It always seems to me to be a big church for such a small village and it's also quite an odd design with having the central tower.  I think it looks more like a schoolhouse or part of a mill building. 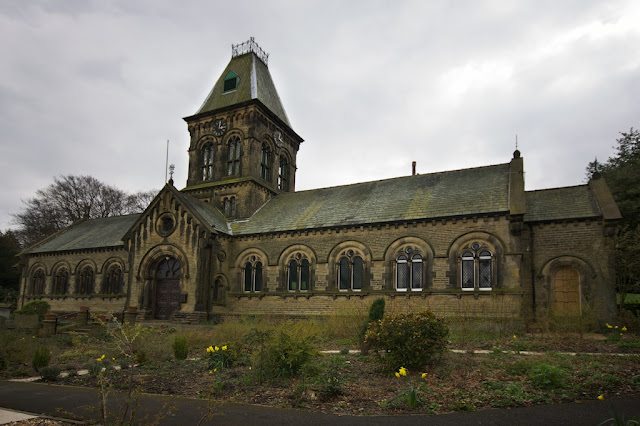 The second photo is looking up from the gate to the main entrance with the clock tower above.  Again the sky doesn't help the photo much. 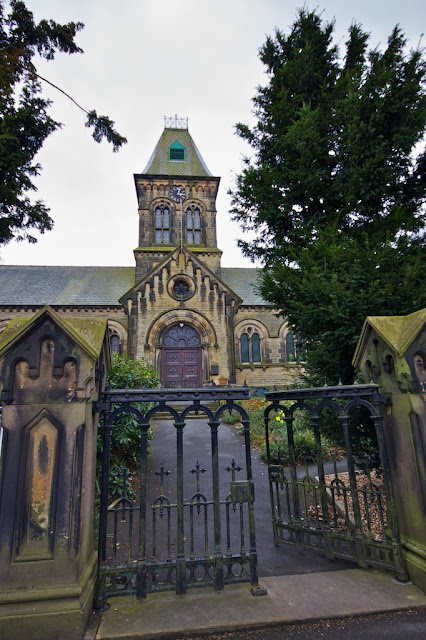 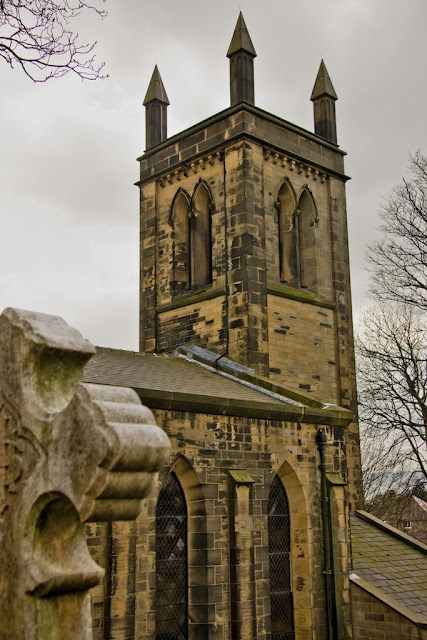 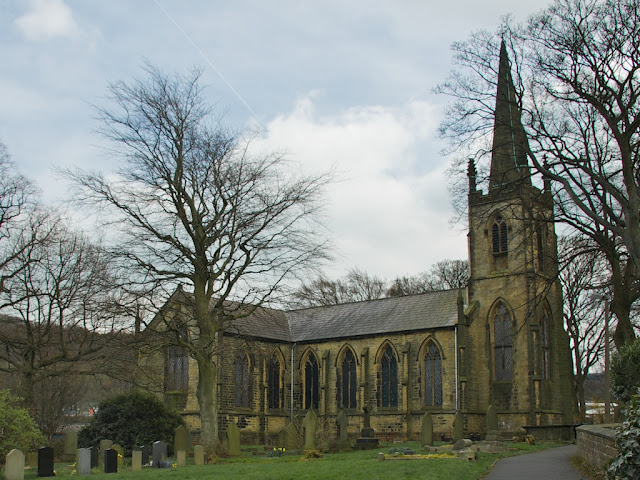 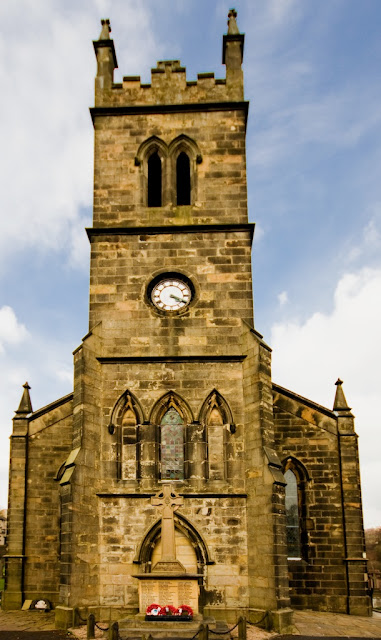 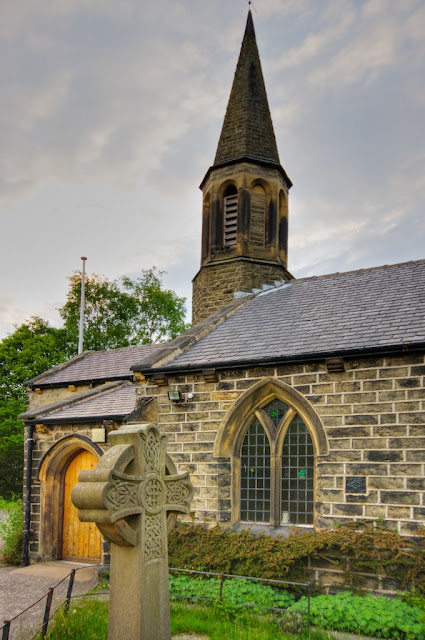 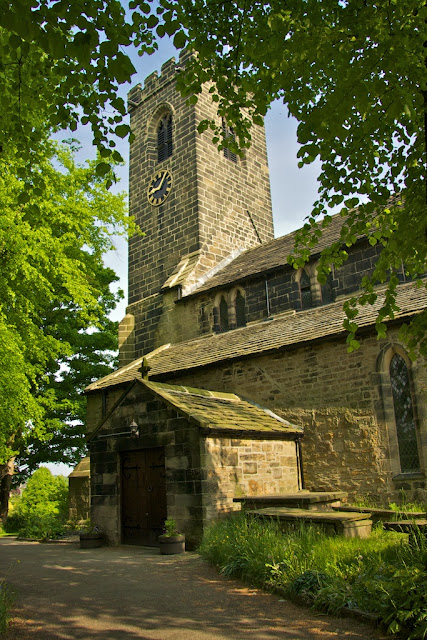 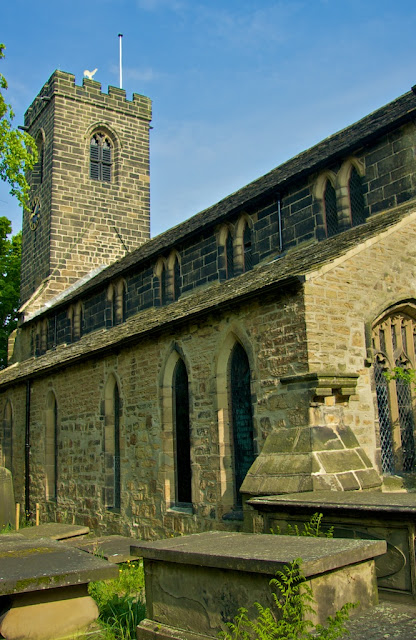 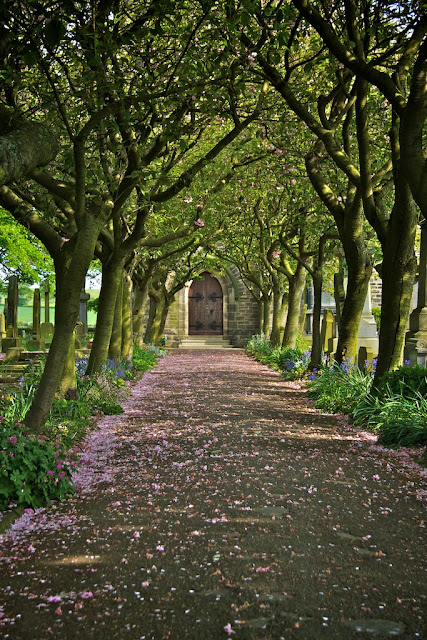 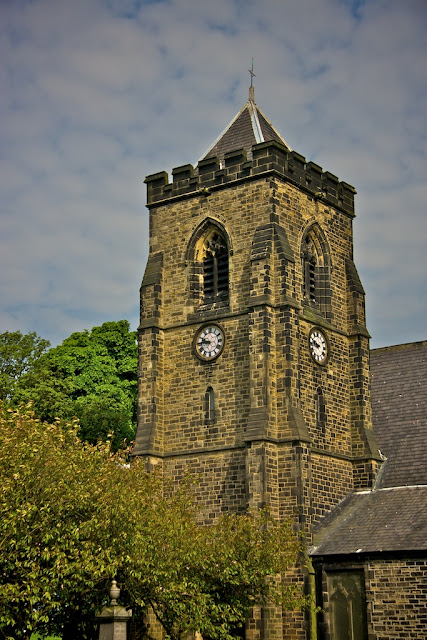 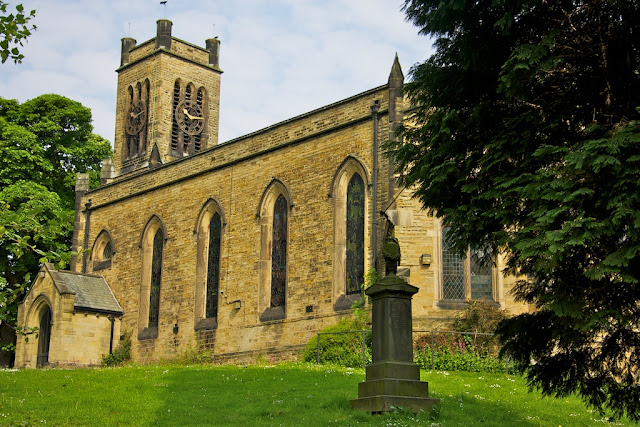 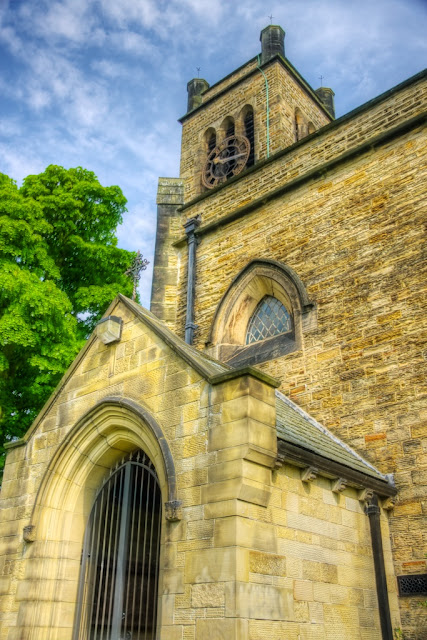