Playing with the Lensbaby

I've spent a lot of time playing with my Lensbaby Composer to try and get to a point where I'm getting the results I am wanting. My main problem is getting used to manual focusing, especially with the lens being intentionally making most of the image well out of sharp focus. I'm getting better results by not wearing my glasses but I have to make sure that I adjust the diopter on the camera eyepiece to compensate for my poor eyesight.

I'm not putting any of my testing into my gallery site at the moment so here's a few from this weekend to have a look at. This first one is at a little fishing pond at the bottom of the road where I live. The focus point isn't quite right because it was supposed to be on the fallen down tree but has ended up being best on it's reflection in the water. 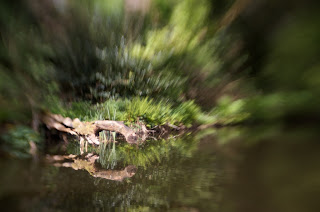 I'm much happier with the focus point on this image of the dandelion clock which I think is just about spot on. My problem with this image is is that maybe the background is a bit too busy and I'm feeling the nettle leaves are pulling my attention away from the dandelion a little. 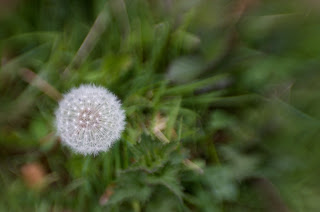 I love the daisies. Again it's a bit busy in the background but I think it works a bit better on this image because there are multiple main subjects. Maybe I should crop the dandelions off from the left of the image so it's just daisies. I was taking pictures of some blossom on a tree when this hover fly started buzzing me. I managed to get a few shots of it before it flew off and this was the best. The background is the white blossom and the leaves of the tree I was trying to shoot and I think it creates a good contrast to the fly. 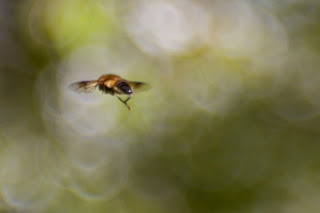 I went for a it of a walk while my daughter was having a horse riding lesson and caught this image of a couple of horses running down the field. In the background is Emley Moor television mast. This morning I took quite a lot of shots in my back garden because it was dull, wet and overcast and I didn't feel like going anywhere else. This first one is a plant that I have no idea what it is but it comes up every year and has a few small tulip shaped flowers. This year it looks to be producing a lot more flowers than normal and they're just about to bloom. I'll probably take some more photos of them later. 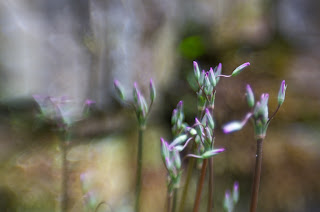 A few weeks back I sent for a free wide angle/macro conversion lens for my Lensbaby so I thought I'd put the macro bit through it's paces. This first shot is one of the buds from the unidentified plant in the previous image. With the macro attachment the depth of field is extremely small, probably less than a millimetre so getting anything in focus is a bit of a bonus. 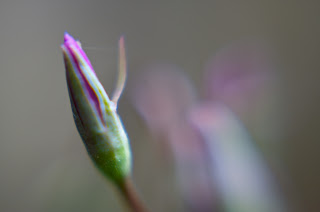 These next two images were both from the same burst of multiple shots where I was moving the camera to get different parts of this rhododendron flower somewhere near focus. I think in this image that the nearest thing to being in focus is the little droplet of rain on the stamen. 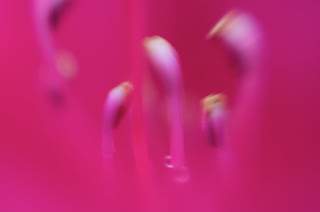 There were quite a few in between shots but I like this one because I can see details of the little hairs near the base of the stamen and if I look very closely there are some more rain droplets almost visible. I love the colour of this image and how the subtle changes in shade and brightness reveal the subject. Almost artistic. 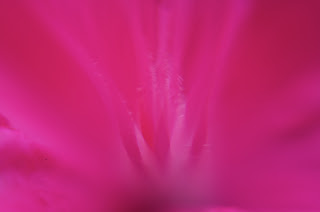 Last one. I've taken the macro converter back off to take this image of the little azalea flowers although I did take some macro shots of this flower as well but they didn't grab me as much as the rhododendron ones. In thi image I like the background on the left because it's very dreamy. Unfortunately the old flower heads to the right of the flowers are too much in focus and are quite distracting. 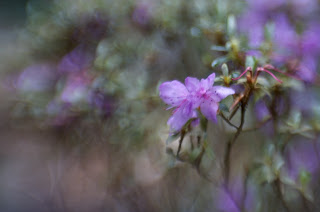 I'll keep on testing the lens and post more images later. I've also been doing a lot more HDR images and I'll post some later in the week when I've sorted out some of the more interesting ones.
at May 04, 2009

Love the pink picture! But I don't recognise the lilac flowers - not the ones I was thinking of at all! You'll have to publish a pic when they flower so we can get a better look!