It's been over two months since my last post and I think it's about time I got back into it.  I've had an early bout of winter blues and there's little sign of getting past it yet even though we're only in mid autumn.  I feel my photography has seriously got stuck in a rut and although I've taken lots of pictures I'm not getting the urge to share them at the moment.  So this is taking a lot of effort, but I'm determined to push through before I lose the will to make pictures any more.

It's been quite mix of weather the last couple of weeks but last Saturday we had a bit of early sunshine.  So while my wife was having her hair done I wandered into Victoria Park in Holmfirth with my camera to look for inspiration.  The sun was quite low and sky was blue and I thought I might find some trees with their leaves a nice autumn yellow to make a great contrast to the sky.  It's a great combination of colours, yellow, green and blue.  But I just couldn't find a shot.

As I walked about I spotted some mushrooms growing at the bottom of an old tree stump so I went to have a closer look.  The tree stump was very dark with it being in its own shadow and the mushrooms were out in the sunshine and very bright.  I decided to make three exposures of each shot at different shutter speeds so I could merge them to makes tone mapped HDRs with details in the shadows.  I took quite a few shots at different angles and heights to make different compositions of the mushrooms and in the end I chose this ones as the best.  In the end I didn't merge the exposures because I decided I didn't want the detail in the shadow to detract from the detail in the mushrooms.  When I look at the picture now I feel I need to get rid of the grass in the background on the right because it's drawing my eye away from the main subject. Its too light so maybe I can darken and desaturate it, or perhaps clone in some more tree stump. 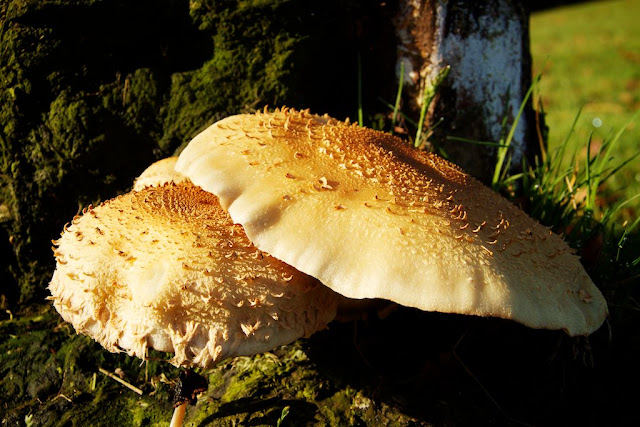 After the mushroom I started heading out of the park and there is a small public garden with a bench and some shrubs in the borders.  I spotted some very late blooming honeysuckle and went to have a look.  Although the weather has been mixed it has been quite mild for the time of year so there are a few late blooms around.  I quite like this picture but again I wonder if I should darken the background a bit more to emphasise the flower.  Maybe add a bit more of a vignette to darken the corners might work. 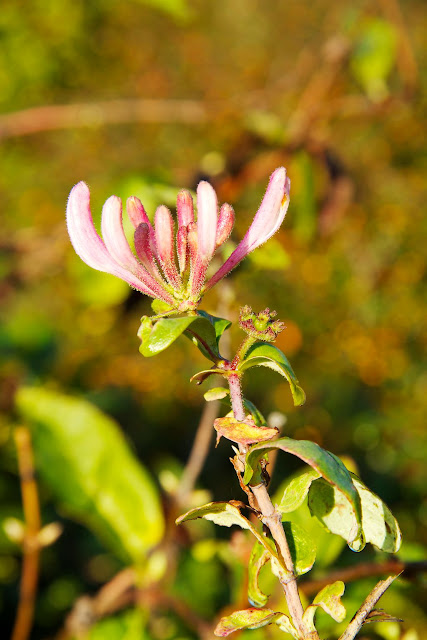 Next to the honeysuckle was an unknown (to me) bush with some furry leaves which had lots of water droplets from the overnight rain.  Some of the leaves were in the sunshine and I spent the rest of my time trying to get some interesting pictures of them.  This was my first attempt but it doesn't work too well with the angle of the shot and the busy background.  I need to seriously get rid of the contrast in the background by darkening and desaturating it all because the foreground subject is completely lost. 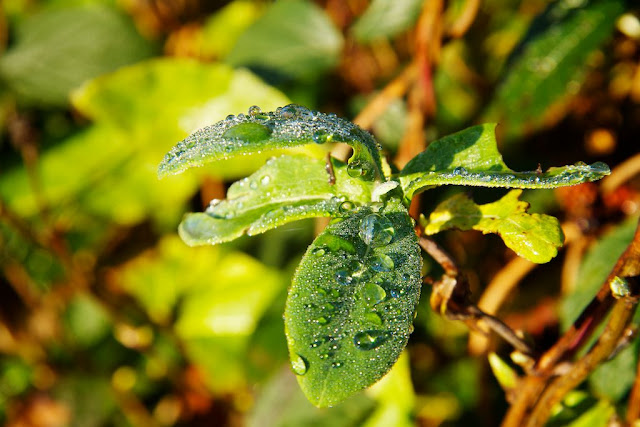 This next ones a bit better with having the wall in the background, but the bits of honeysuckle stem are a bit distracting.  I lowered the angle of the shot to try and look through the big water droplet and this works a bit I think. 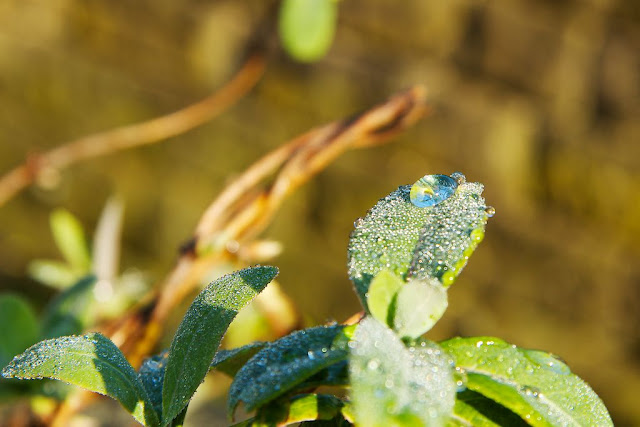 Same leaf but from the side of the leaf this time and lower again.  Now I'm getting the shot right through the big water droplet and I quite like the effect of the light bending through it.  Maybe again I just need to get rid of the light circle near the top left because it's distracting but overall I pleased with this picture. Same leaf again and back to the same direction as the first one but lower and closer. There is very little depth of field and I've used the exposure two stops below the metered exposure which is why it is so dark.  I chose this exposure because the background has almost completely gone and the only part of the picture in sharp focus is the big droplet.  I noticed a variety of colours in the little droplets so I boosted the overall saturation sky high and then desaturated the green so that the leaves look a fairly normal colour.  I love this picture, even the very light blurred spot in the foreground because it is on a bit of a diagonal line through the composition.  It looks even better full size on my computer screen with the weird shapes in the big water droplet and all the little coloured circles of bokeh from the little ones. 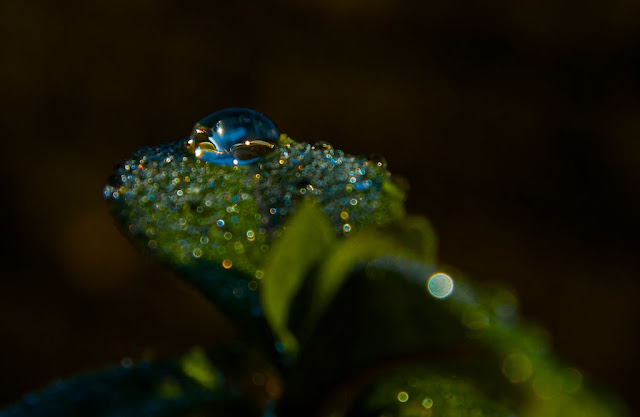 Thanks for looking at this post.  I really hope you like something here.  Writing this has been a bit of therapy for me and maybe I can get back into the swing again.  No promises but I'll try to get back to posting weekly.  Please give me some feedback in the comments if you have a bit more time to spare me.
at November 15, 2011

Hellooooooo - glad to see you are back in the saddle - my blog is also suffering from lack of input! Trying to sort that out as we speak!

My fave leaf is the sideways-on view through the water droplet. Very nice indeed!