Last Saturday was a beautiful day when we went for our "Marsden Moorland Ramble", which was another card from our "AA 30 Walks in West Yorkshire" series.  My wife wanted to go on a slightly longer walk than the usual 5 or 6 miles but didn't want to go too far from home.  Our starting point in Marsden is about 8 or 9 miles away going through Holmfirth and Meltham.  We arrived at the station car park at about half past nine and headed up the canal tow path towards Tunnel End.

At Tunnel End both the canal and the railway line disappear under the Pennines and reappear at Diggle in Lancashire.  The canal has been closed for a long time but the railway line is still the main connection between the Cities on Leeds and Manchester.  This first photo is looking at the entrance to the canal tunnel and the cottages next to it. 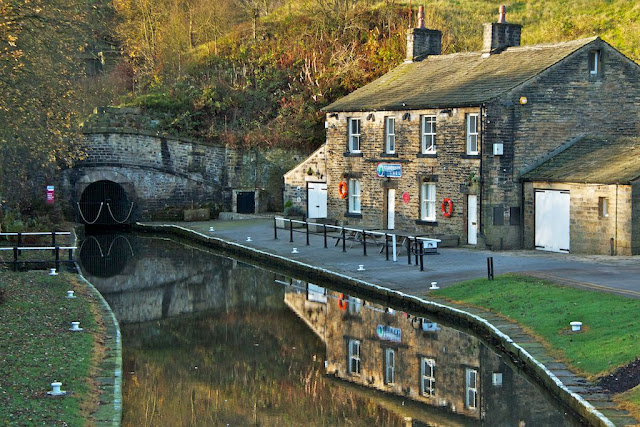 From here we walked past the Tunnel End Visitors Centre, then up past the Tunnel End Inn (which apparently is closed) and then along a path at the edge of the old reservoir which supplies water to the canal.  The trees have nearly lost of of their leaves but this old tree still had a few beautifully coloured leaves which were lit up in the morning sun. 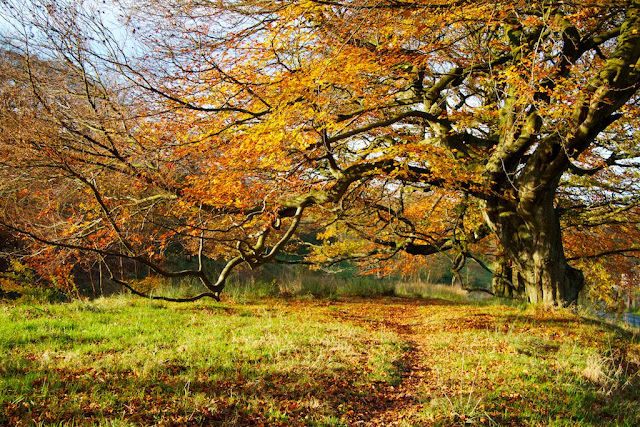 At the end of the path we joined back onto Waters Road and and past the Hey Green Hotel.  From here we went down another path beside the river to the Eastergate Bridge where I took some photos but we were in the shade of the valley and I didn't think they were worth posting.  There's also a strange sculpture here and some information about the pack horse trail that we were about to follow.  Along the trail are a series of stone marker posts and this photo shows one next to the path we were walking along.  In the background is a round topped hill which the details on the card said we would be walking to the left side of later. 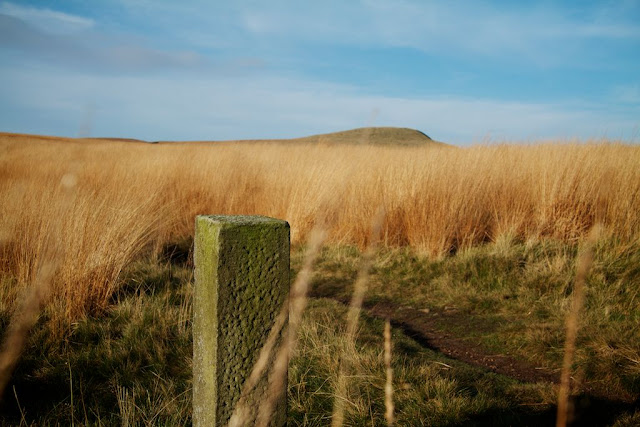 The path was quite flat here and then we dropped into a little valley with a stream before climbing up towards the round topped hill.  In this next photo is Lynne crossing the stream with Evey the dog watching me take the photo.  Up the path is another marker post for the pack horse trail. 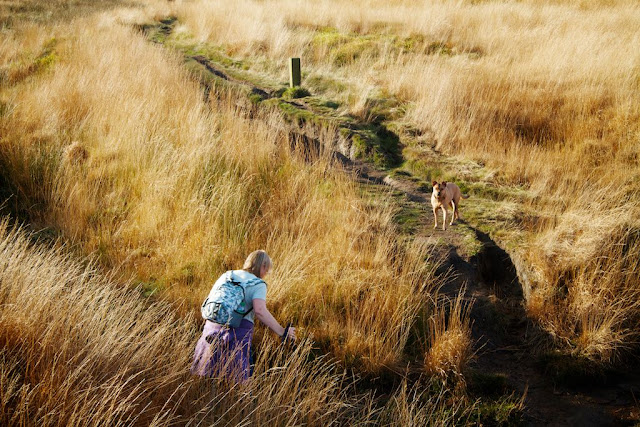 This next photo is from part way up the round topped hill looking back down the path and yet another marker post.  At the other side of the hill we head down towards the Buckstones Road and just before the car park we join the Pennine Way and then started heading South towards Standedge 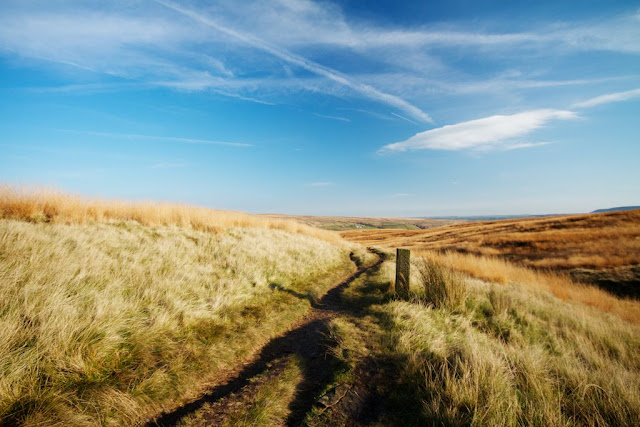 As with the Stanage near Sheffield that I blogged about back in April 2010 the name Standedge is derived from stone edge and the next photo has some of the stones on the edge.  In the background we're looking towards the little village of Denshaw on the far left with the Castleshaw Upper and Lower reservoirs nearer the centre.  The stones here are nowhere as impressive as Stanage but there were some people climbing them with ropes further along. 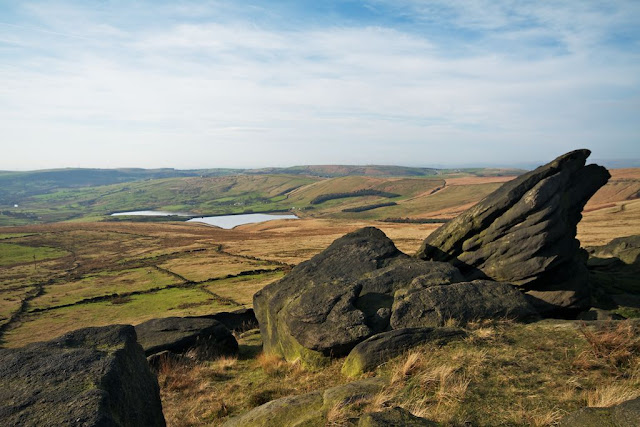 As we approached the Huddersfield to Manchester road near to Brun Clough Reservoir there was this wooden signpost for the Pennine way.  The sign point back in the direction from where we had come was missing.  On the right was Evey watching me again and wondering why it was taking me so long to get along the path. 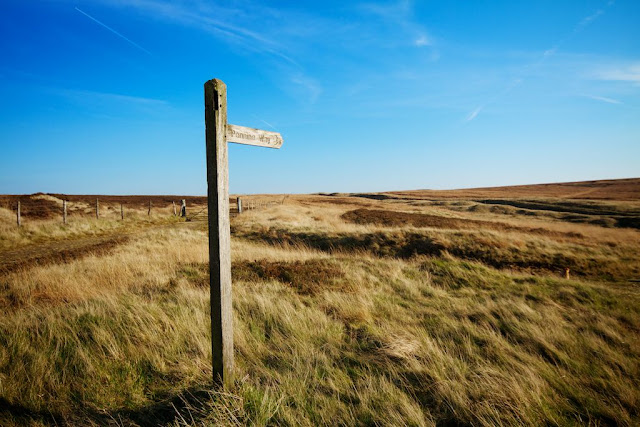 We crossed the road and headed down the path going past Redbrook Reservoir and then on to Old Mount Road towards Hades Farm.  This next photo is looking across the golf course towards another part of the Marsden Moor Estate and Butterley Resevoir.  Further up that valley is Wessenden where I have blogged about several times and walked around even more times.

Further along Old Mount Road I took this photo of the West end of Marsden with the big old woollen mills and the little millworkers houses.

After this we dropped back down onto Mount Road into Marsden town centre and then back to the car park.  The walk was about eight miles and we took a little over four hours to complete it, including stops for refreshments and taking photos.  Which wasn't back considering that some of the pathways were pretty hard going underfoot.  It was a very good ramble and just what we needed to get away from the stresses of everyday life.
at November 24, 2011