My friend Jack and I went to see Nick Harper at the Picturedrome, Holmfirth on the Saturday afternoon of the Holmfirth Folk Festival.  Had a few pints at the afternoon concert, and a few more in the Elephant and Castle afterwards.  So when Jack's wife came to pick us up and take me home I was pretty merry.

Anyhow, when I got home I got changed and took Evey dog for a walk in the woods near our house.  I've been noticing as I've travelled around that there doesn't seem to be may bluebells this year.  I'm wondering if that's anything to do with it being a very dry spring this year, although it has been a bit wet recently.  I had my camera with me so I decided I'd try to get some images of the few bluebells that were in the woods.

So here they are. 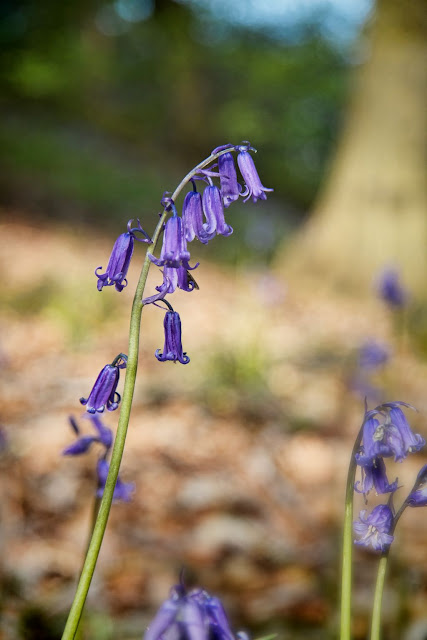 As you can see there weren't many bluebells about.  Usually there's big areas with the bluebells jammed in tight. 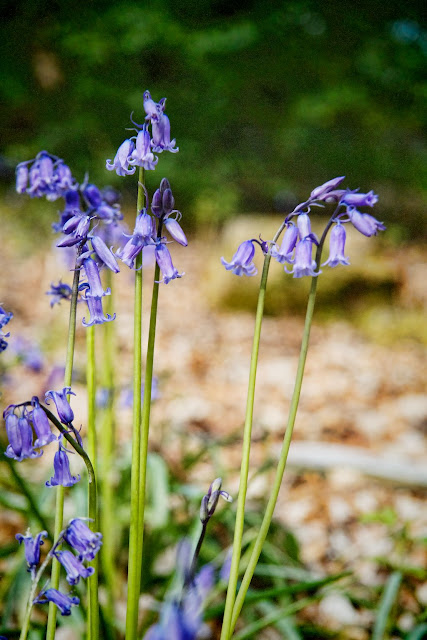 However, I guess it does give the opportunity to get in close and isolate small groups of flowers. 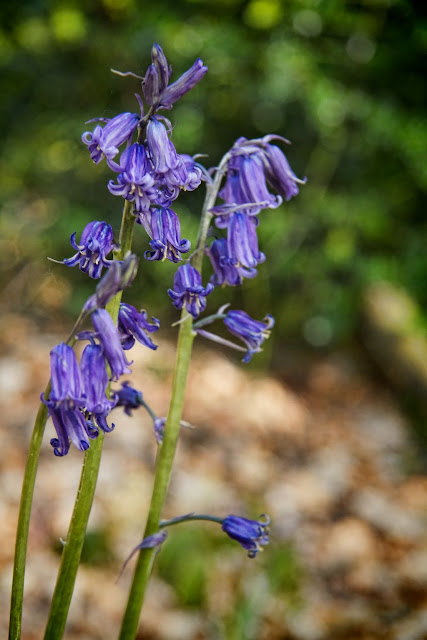 I think with being a little bit less than sober I was more inclined to get down and lay on the ground to take some of the.shots 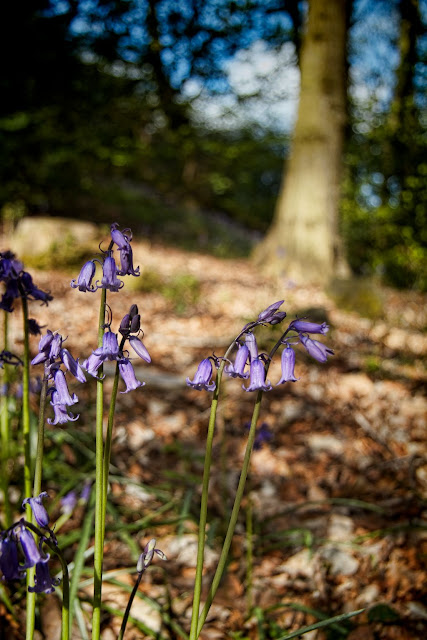 Also I did fall over once when I slipped in the mud.  It doesn't show too well in the photos but the ground is quite steep in places. 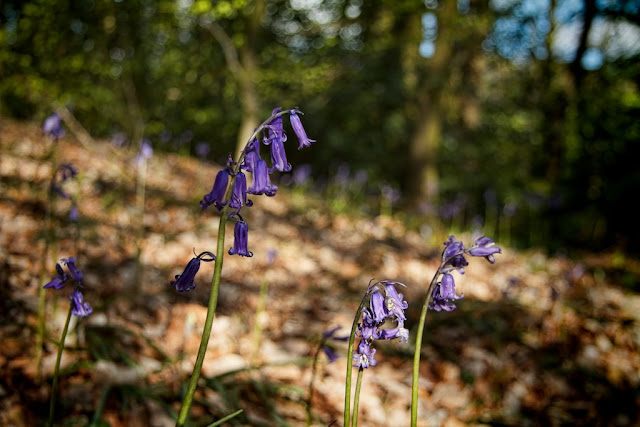 I used Evey in the background in this shot to provide more contrast to pick out the bluebell flowers. 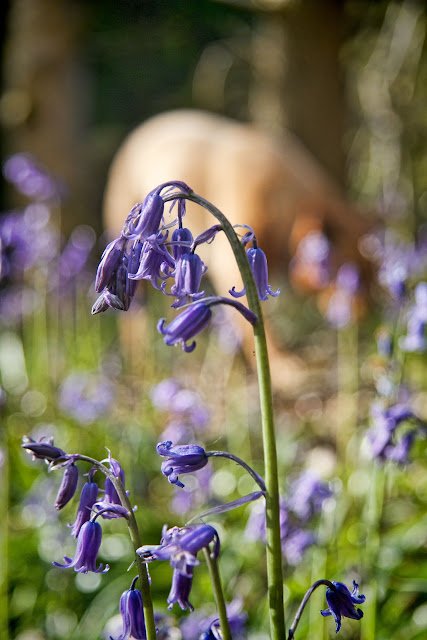 It was fairly warm and sunny and by late afternoon the sun was streaming in through the trees. 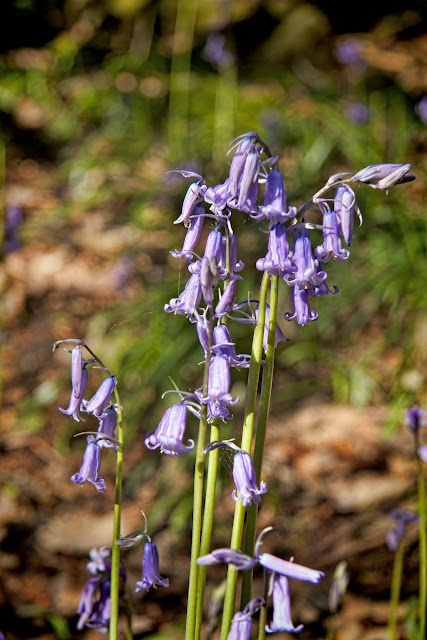 It was good to get some of the flowers lit up in the patches of sunlight. 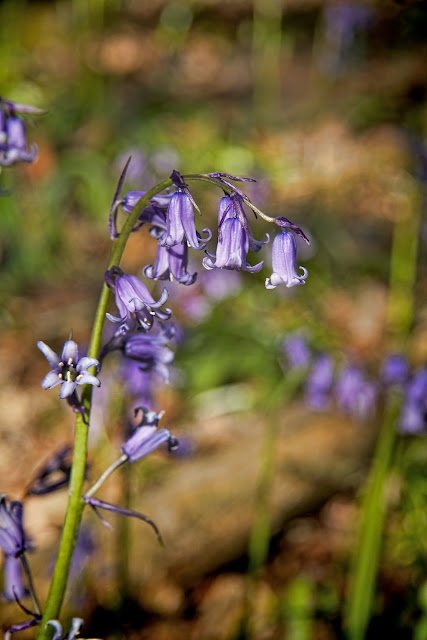 In this shot I used the dark shaded tree stump to bring the flowers into the picture.  I wasn't too sure about the twigs behind the flowers being a bit too much of a distraction.  Parts of the twig had crept into focus so I blurred them out so they were less distracting.  Maybe I should have removed the twigs and re-taken the shot. 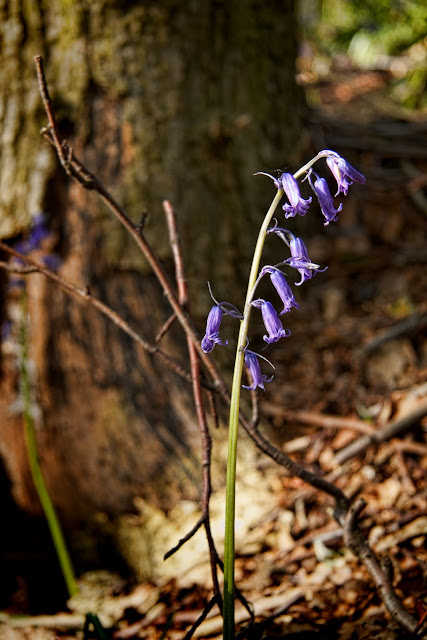 For a bit of a change some wild garlic flowers with a couple of bluebells in the background. 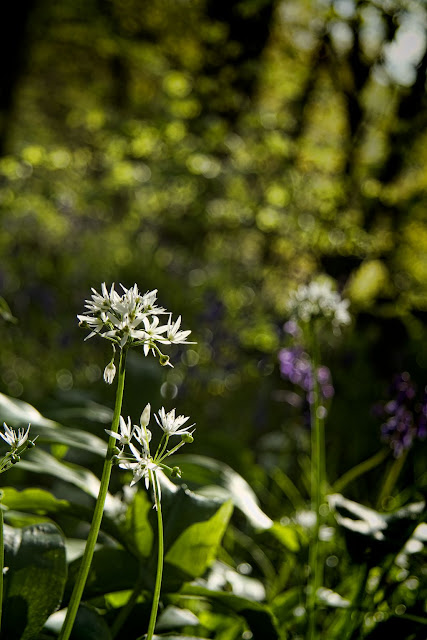 Finally another wild garlic flower with lots of bluebells, but not as many as there usually would have been. 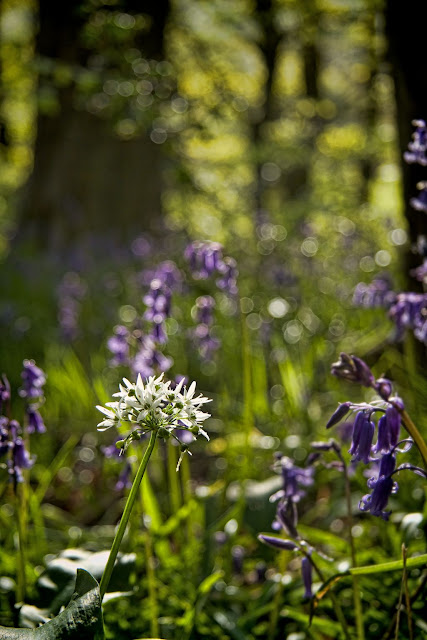 I don't usually talk much about post-processing my images but I've been using Topaz Adjust 5 plug-in for a couple of weeks so this and the previous Joan Miro post are my first experimentations, and I'm quite impressed.  The program has loads of options to use to enhance details, do things with the exposure, adjust saturation, add sharpening, make local changes etc.  It comes with hundreds of presets which demonstrate the versatility of the adjustments that can be made and you can take a preset, make your own adjustments to it and then save your bespoke adjustments to use later.  Some of the presets are weird and wonderful and theres also an "I feel lucky" button which will randomly apply a preset to you image.  Keep clicking the button until the result gives you inspiration.

In the last two posts I've been fairly conservative with the adjustments but I might make a post soon showing some of the more wacky things Adjust 5 can do.
at May 17, 2012