It was a wet Saturday afternoon and Lynne's sister and husband had come for lunch after visiting the father in law.  We had arranged to go to the sculpture park and even though it was a bit wet, it wasn't too bad so we kept to our plans.  We'd gone in separate cars as they were heading back to Ripon after the visit and the sculpture park is pretty close to the M1 to take them Northwards.  We hadn't arranged on which car park to meet at so as expected we went to completely different ends of the park.

When we met up we wandered around for a while in the rain and then headed to the visitors centre which is next to the underground gallery.  The temporary exhibitions are mostly in and around the gallery as with the Jaume Plensa exhibition last year.  There was also a selection of prints for sale in the gallery above the visitors centre.  It had started raining hard so we headed for the underground gallery to keep dry for a while.

On the way down the stairs to the gallery we looked over to one of the outdoor sculptures in the area below.  Lynne's sister, Stella, knew mainly of Miro's paintings and prints so she was pleased to sculptures for the first time. 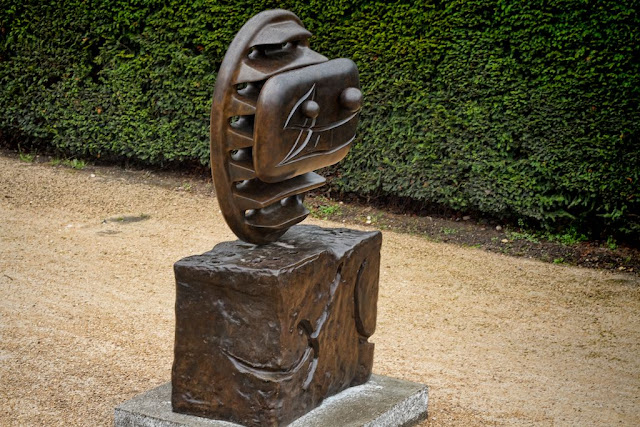 It was quite busy inside the gallery because of the rain but I managed to take a few photos of this first piece which was near the gallery window.  Even next to the window it was quite dark so it took me a few attempts to to get the exposure acceptable.  I then found out that we weren't allowed to take photos inside the gallery so I put my camera away until we got back outside. 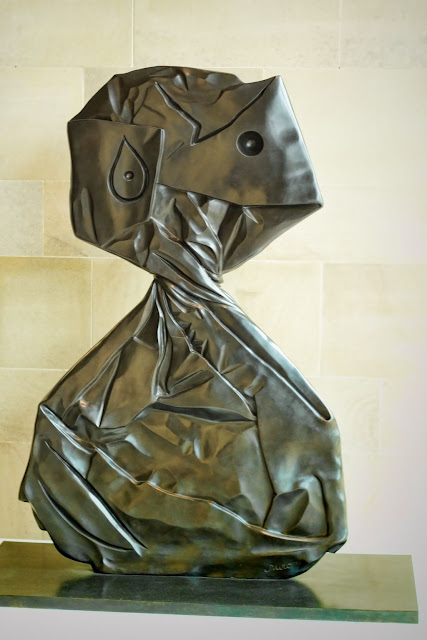 I must admit I didn't know anything much of Miro before I came to the exhibition and I was struck by how much similarity in style there was between most of the prints, paintings and sculptures.  The sculptures inside looked to me smaller versions of some of those outside and the paintings looked to be of the sculptures.  It could have been the other way round of course that the sculptures where representations of the paintings.  Anyhow, I liked most of the work, although not all of it appealed to me, such as the buffets and chairs with odd things attached to them.

When the rain eased of a little we went outside to look at the outdoor sculptures.  These first few photos were taken on the grassed area opposite the underground gallery.   I think this first one should be called "Does my bum look big in this?". 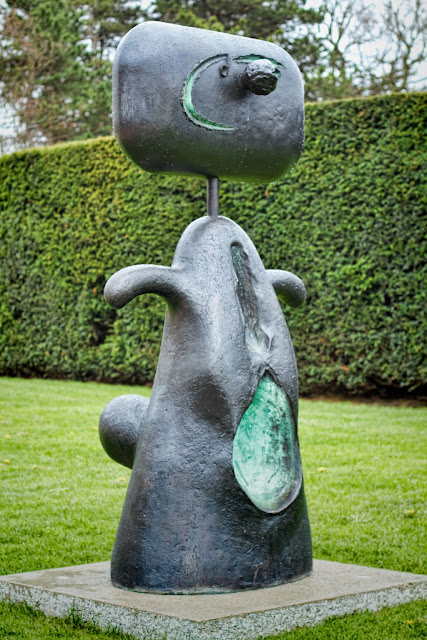 I guess this next one is a woman.   No further comment. 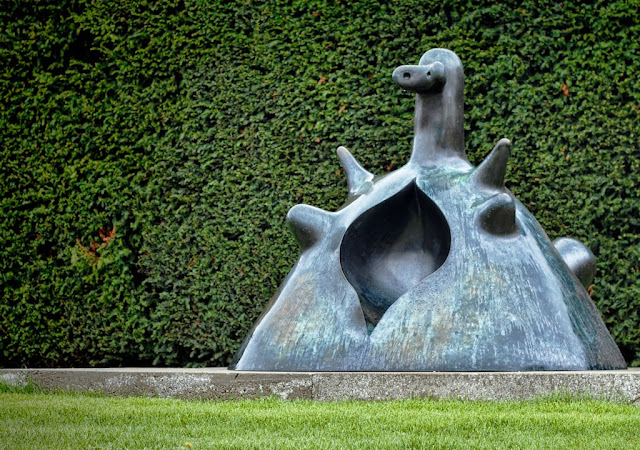 Well this chap looks pleased to see us! 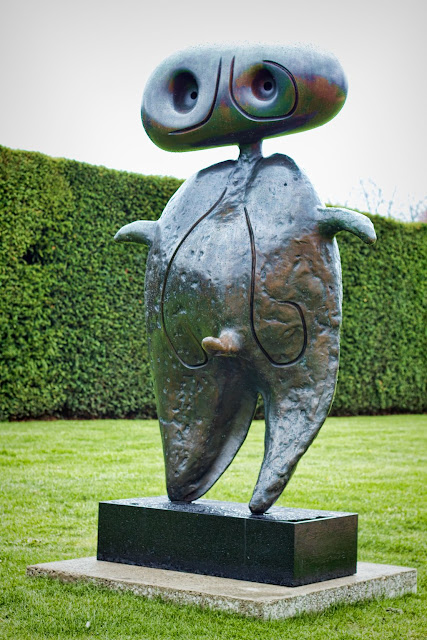 Not too sure about these two.  All I can say is this one's close and the other is far away. 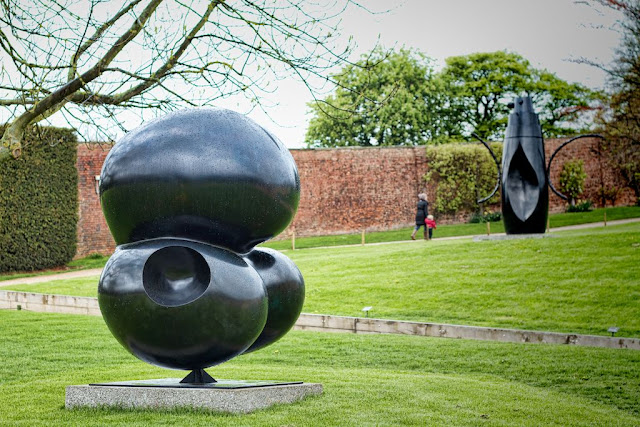 As you can see the sky is pretty grey and there's lots of moisture on the sculptures.  This one has a strange green glow with the reflection on the grass on the underside of the head. 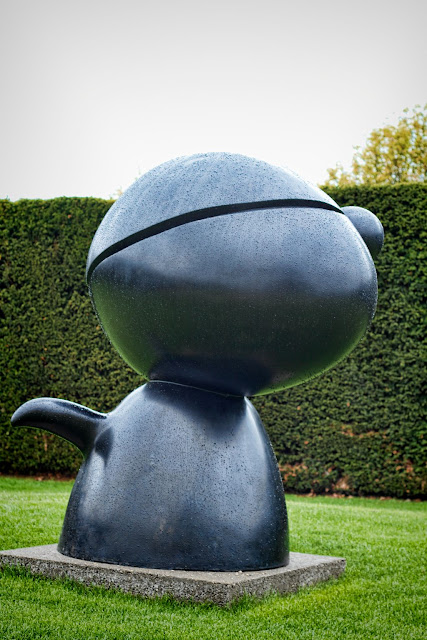 Here's Lynne's sister Stella taking a photo of the far away sculpture, from a bit closer. 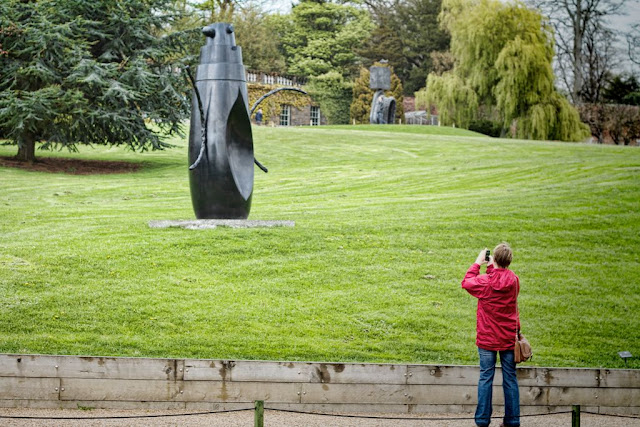 Here's the far away sculpture close up with a different one far away. 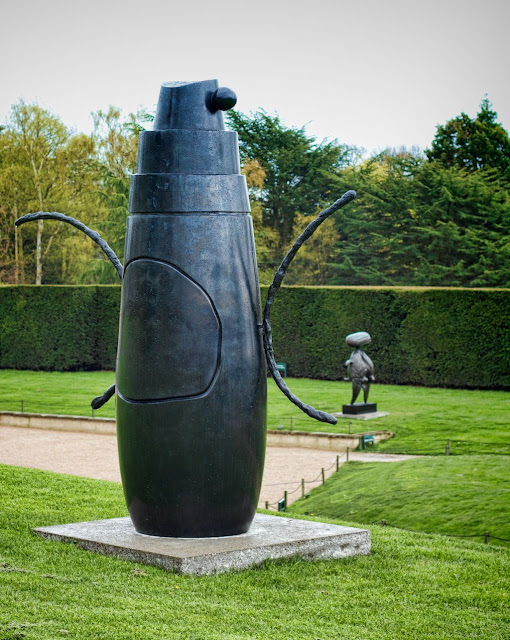 The next one looks to me like a soldier with a shield coming out of the trees. 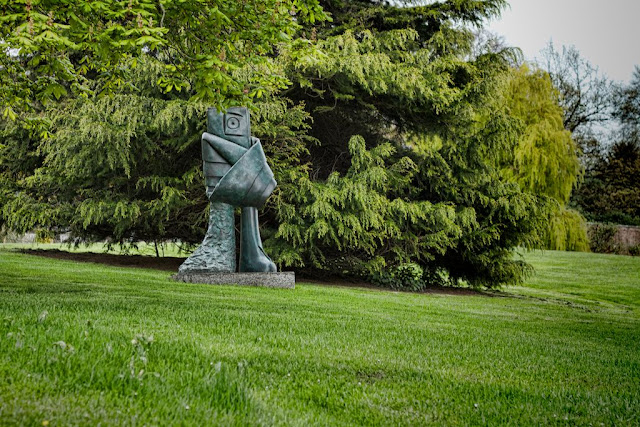 Here's the soldier again from a bit closer. 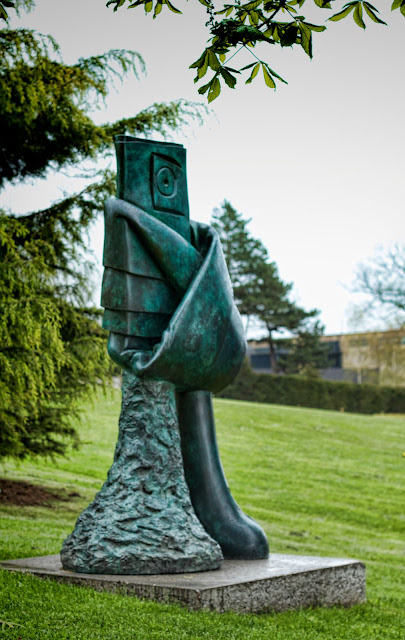 This was the biggest sculpture which was located at the top end of this enclosed garden.  It's quite hard to get an idea of the scale but it was massive. I tried to get a shot with someone stood there but for a change everyone moved out of the way when I started to shoot. 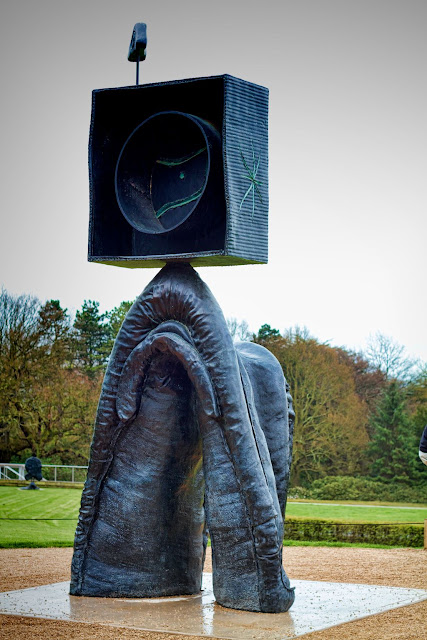 Finally the last shot taken in the garden, I hope I haven't offended anyone who is a Miro aficionado with my comments on the work. 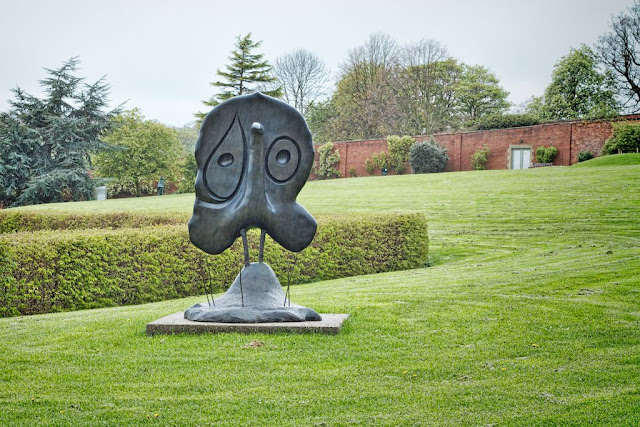 It was a pit about the weather, but to be honest I think the sculptures look quite good with the rain on them.  This setting at the Yorkshire Sculpture Park is wonderful and in other parts of the park are several works of Henry Moore and many other world renowned sculptors.  As I said in the James Plensa posting I have no association with the park but I urge everyone in the area to visit because it is an amazing setting and has had many improvements made in recent years.  The visitors centre has a wonderful range of goods to purchase from the current and previously featured artists.
at May 05, 2012