On the day after my previous post I took Evey dog for a walk around Digley Reservoir.  It had been very cold overnight and the sky was very blue with some cloud to the South East and there was barely and breeze at all.  The water was almost a mirror so I thought it would be great to make some reflection images across the water.  This first shot is looking up the reservoir towards the smaller Bilberry Reservoir in the distance. 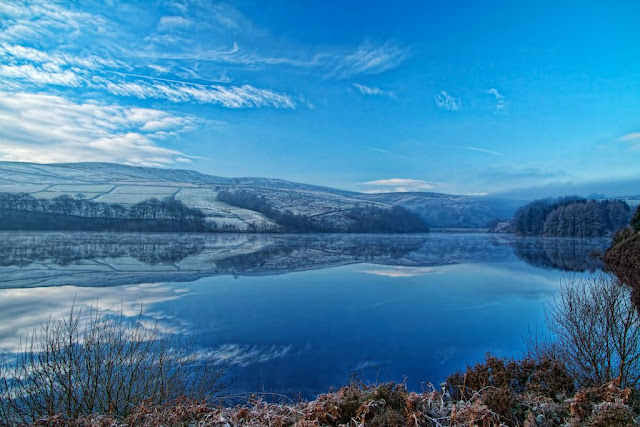 This next image is looking across the reservoir more towards the South where the cloud is being lit up by the sun.  On the horizon is Holme Moss television transmission tower.  The fields are very frosty and white. 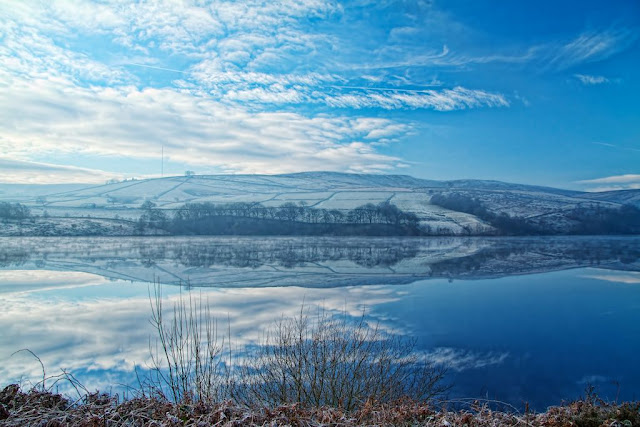 Turning even more towards the South there is still more cloud and in the distance there is signs of some mist coming up the valley.  Maybe I should have  taken a bit more care to line these shots up and then stitch them together into a panorama.  Better still I should have had my tripod and used that to swing the camera around for the shots. 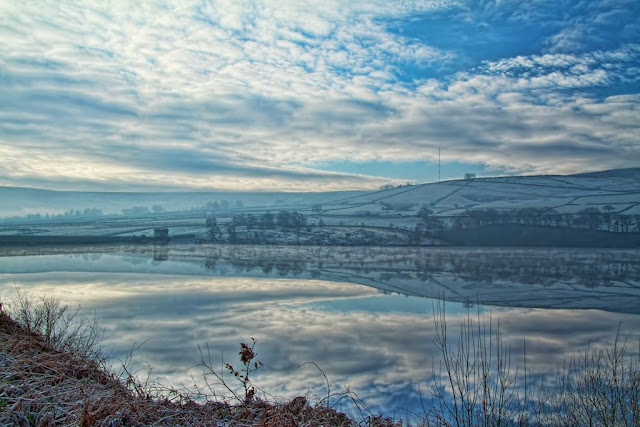 For the next  image I put a very wide angle lens on the camera and took another shot towards Bilberry but now it's hard to make out the dam wall in the distance.  The colours in this shot are very different to the first three because in those I was using a polariser filter to bring out the detail in the sky.  Unfortunately the polariser filter isn't big enough to go on my wide angle lens. 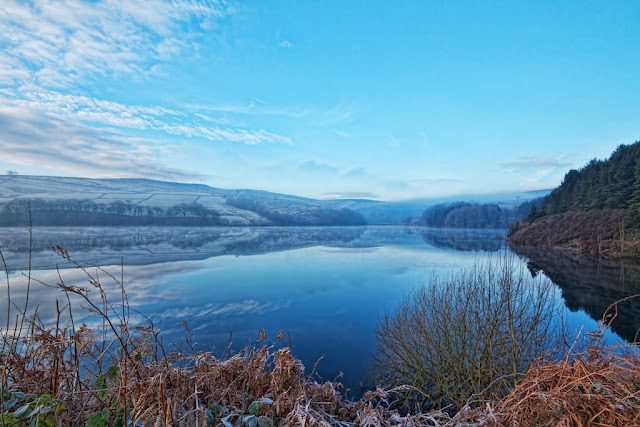 In the next shot I've moved along a little and turned the camera more towards the South where there are more clouds. 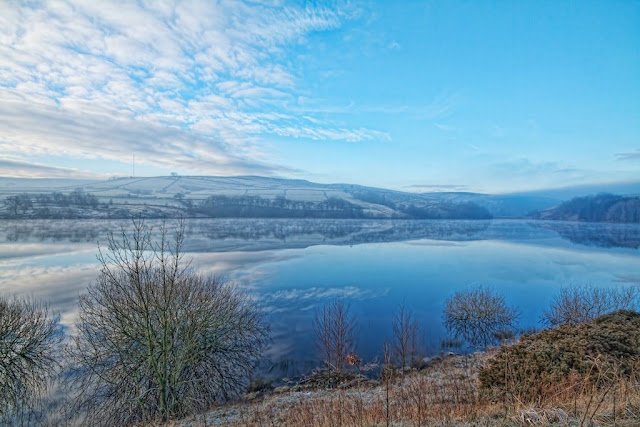 Here I've moved next to the overflow where the water level is not quite high enough to be running down the big hole.  After the rain we've had here in the last couple of weeks I suspect there's a real torrent of water going down there now. 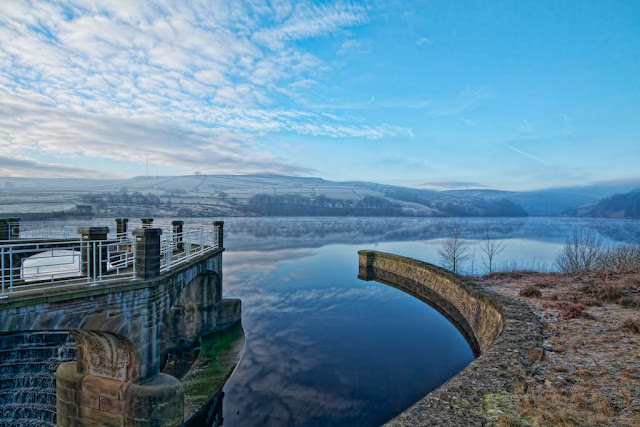 Now I've walked around to the dam wall to get a different view of the overflow. 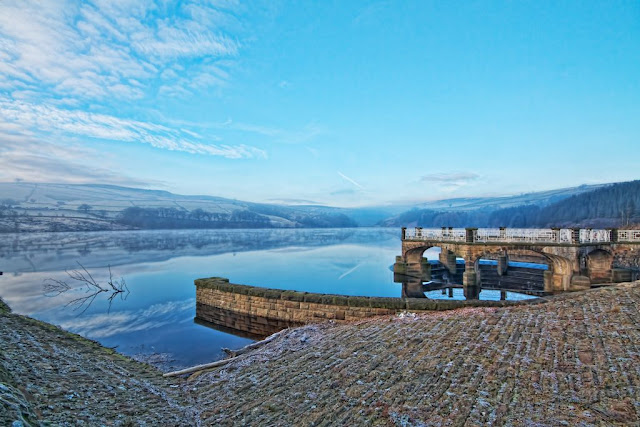 Then to the other end of the dam wall looking back to where I had taken the earlier photos.  I've gone back to my standard zoom to get a closer shot of the overflow and fill the frame with the hillside and its reflection.  I don't remember if the water was a bit frozen or if the surface had a few ripples here but there definitely something breaking up the reflection in the foreground. 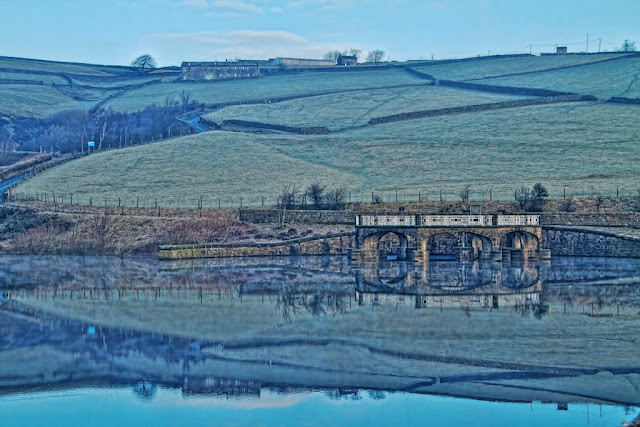 I walked on the path around the reservoir until I reached this point to look back down to the reservoir.  The cloud has increased quite a bit  in the East and it seems a bit mistier than before in the distance. 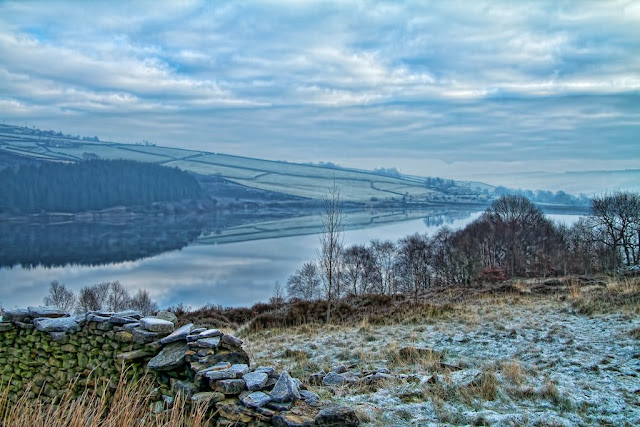 When I reached Bilberry Reservoir it was completely frozen over.  It's much smaller than Digley and does tend to freeze more readily during the winter.   This photo was taken looking towards the North West which was almost completely blue when I set off walking but now has lots of thin cloud. 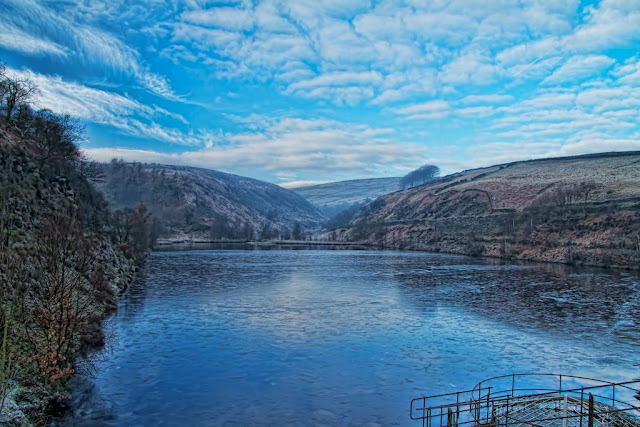 This next shot is taken from the Bilberry dam wall looking across Digley Reservoir.  The water is so still here at the top end of the reservoir making the reflections almost perfect. 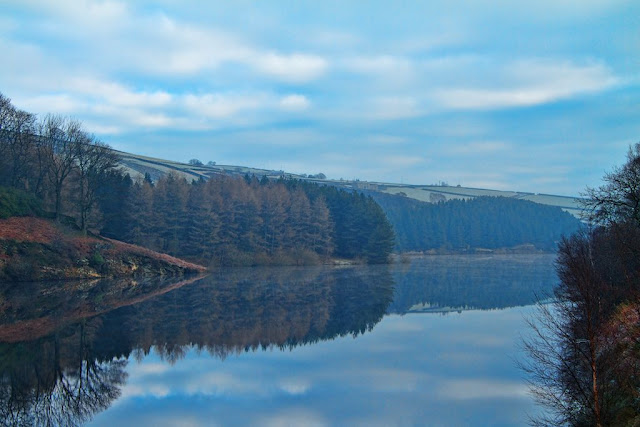 This next image is frozen Bilberry again with the frost on the wall in the foreground. 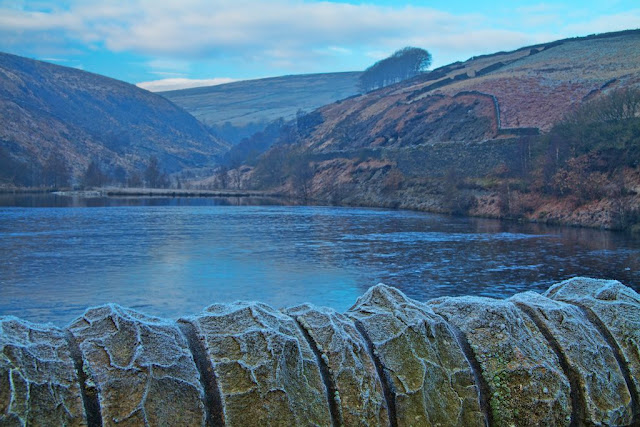 After leaving Bilberry I walked up some of the old roads above the reservoirs where I took this portrait shot of the tree with the frozen puddles in front. 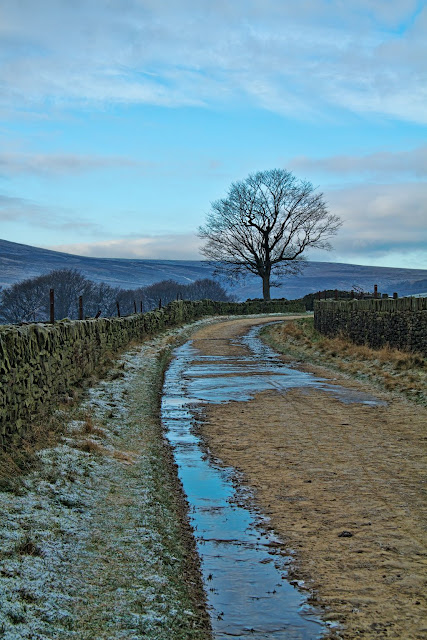 For this landscape shot of the same tree I think I must have put the polariser filter back onto the lens because it has made the sky more dramatic again.  With the cloud there is definitely more mist coming up the valley. 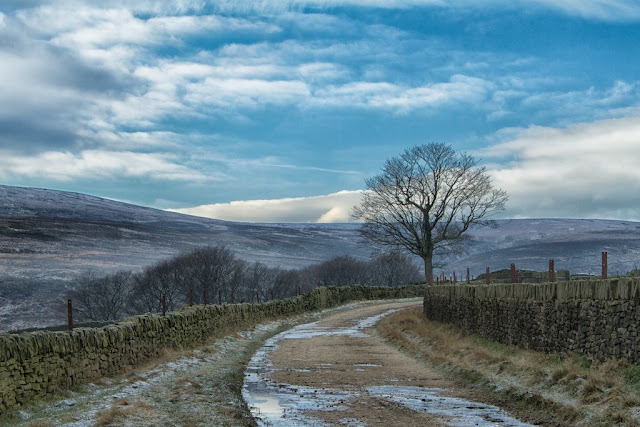 This next shot didn't look much when I first downloaded it to my computer but I just felt there was something there so I spent some time in post processing to make this image.  It felt quite dark and atmospheric with the dramatic clouds and the mist in the valleys.  Maybe too dark. 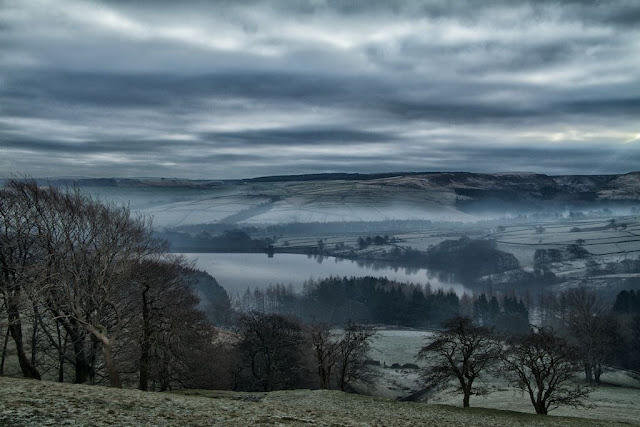 So I lightened it up a bit more and converted it to a sepia monochrome picture which I really love. I spent some more time adding a border, title and copyright notice in PhotoShop Elements. Then I have printed it out on A3 paper, put it into an old picture frame and it's hanging in our dining room. I've put it into the blog at half size so if you click on the picture you can see much bigger version which will easily print up to A4 or bigger. 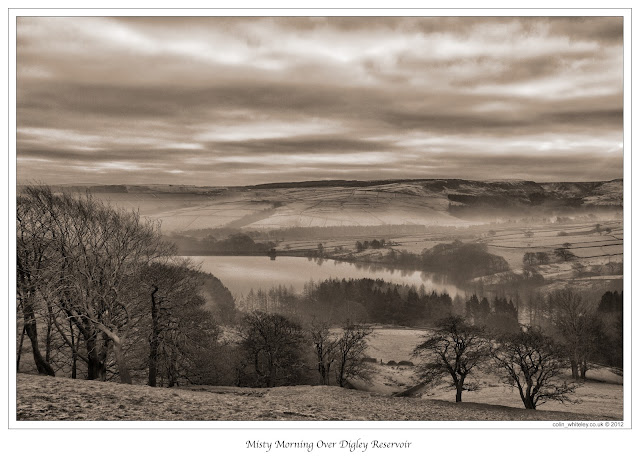 Finally as I was heading back to the car park I couldn't resist this shot of a little old quarry with the dry stone wall in the front.  There's just a lot of textures an colours that I like. 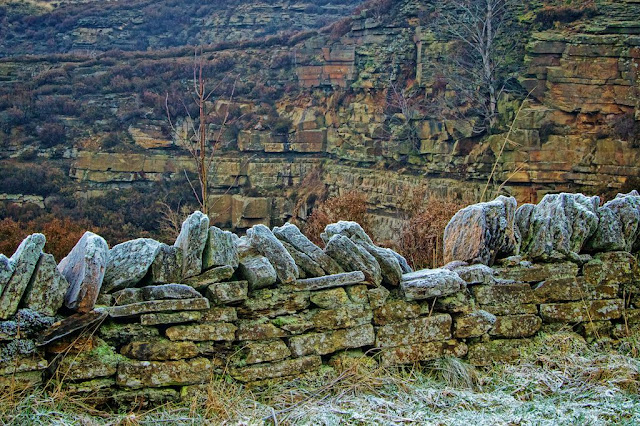 Next time, not sure, maybe some snow pictures.  We didn't have a lot of snow this winter but I managed a couple of walks out in the snow earlier this year which I haven't posted.  Or, although it's not looking likely, the weather might pick up and I might take some new photographs.
at July 10, 2012