Following on from my previous post, the weather hasn't improved much and we're in the second half of July.  There was one day of sunshine last week and I did manage to get out for a walk so I will post those images shortly, but in the meantime we go back to late January when we had a bit of snow up in the top of the Pennines.  At home there was no snow, so Evey and I set off to the hills one Saturday afternoon to get some exercise and make some images. I am posting a lot of photos so the text in going to be quite brief.

We set off from the car park above Wessenden Head Reservoir and this first photo was taken right behind the car park looking over an small old quarry.  There's our old favourite Holme Moss Television mast over to the right and there's lots of texture in the snow and the sky. 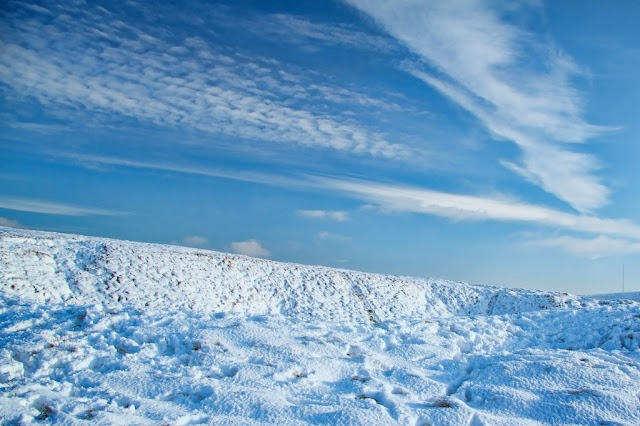 Evey was pretty excited because she's not seen much snow this winter so as soon as we set off she was racing around in the snow.  In this shot I was trying to pan my camera with her so that she was sharp and the rest of the photo has motion blur.  This was the best of the photos I took but still not quite as good as it could have been. 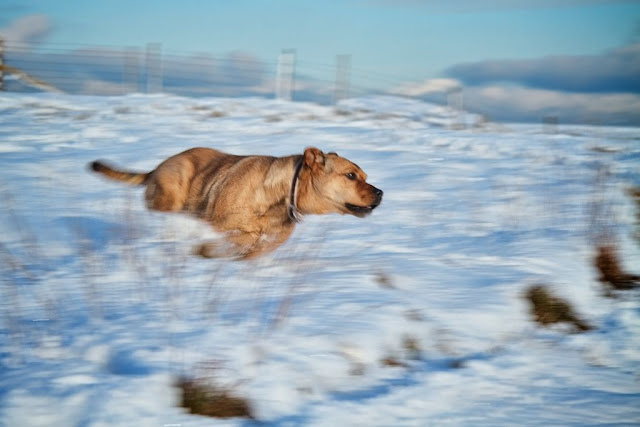 This is the road from Wessenden down to Meltham which provides nice contrast in the foreground and acts as a leading line towards the horizon. 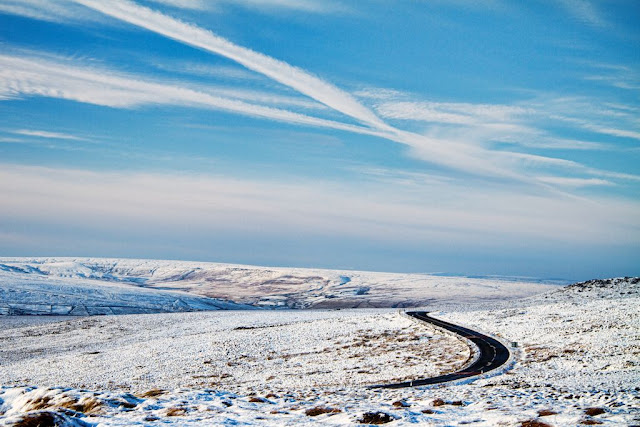 Another leading line photo with the fence heading off towards the TV mast.  We are looking back from the direction we came and so our footprints echo the line of the fence. 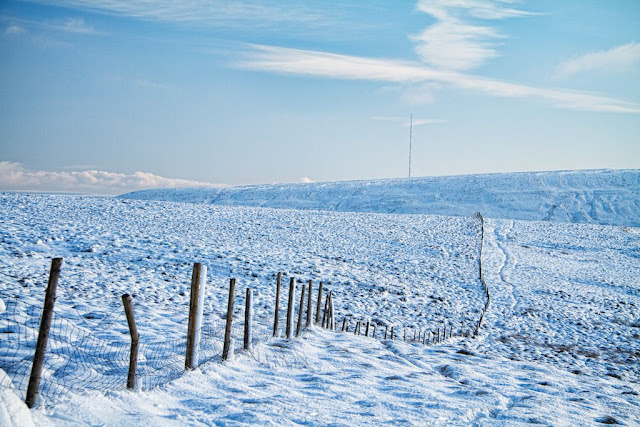 Here we're looking in the opposite direction towards our target location on the horizon. 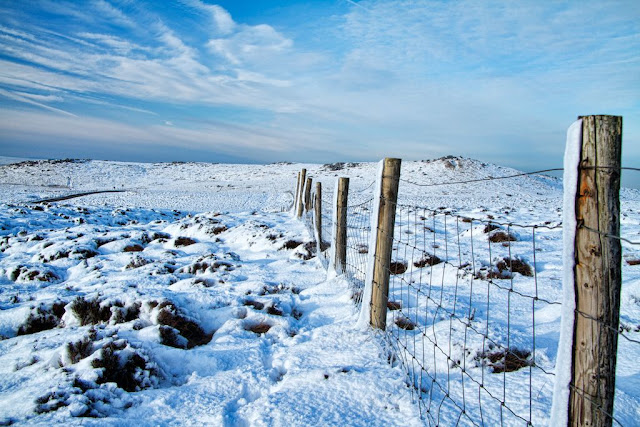 Again my footprints creating a leading line towards that strange cloud formation on the horizon.  Two photographs ago that cloud was over the top of the TV mast. 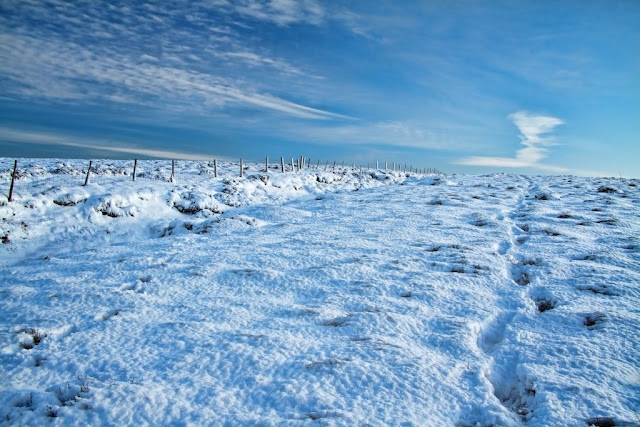 Here we have walked down into the valley between our start point and our target hill and the sky is becoming more dramatic as the cloud increases. 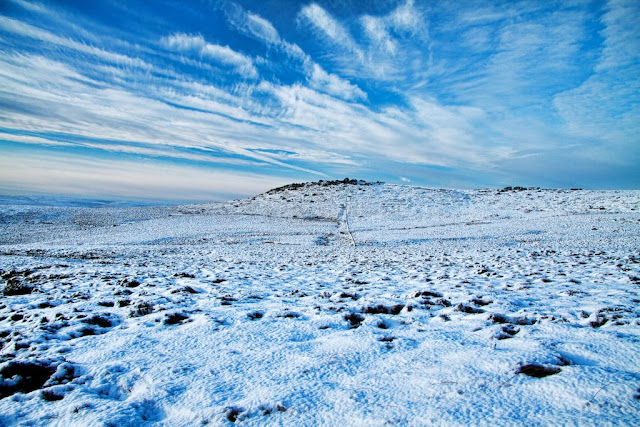 I had to lift Evey over this style because the step is a very narrow plank and then the wire at the top of the fence is quite high.  I like the way the line of snow on the front of the step has fallen slightly away from the wood and is leaving a gap. 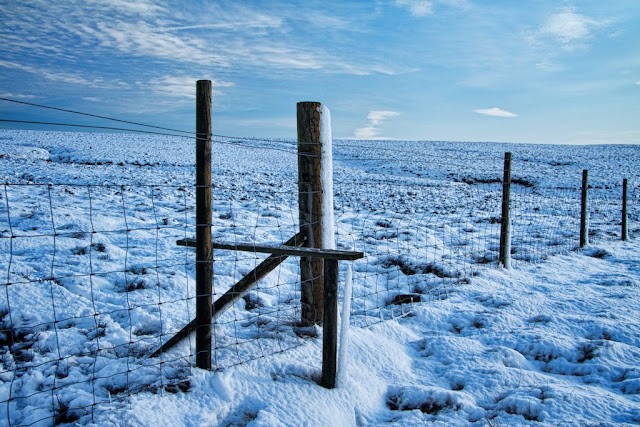 Here we are climbing up the hill at the side of the fence and we're about half way up.  I was really stopping for a rest but took a photo as an excuse to catch my breath. 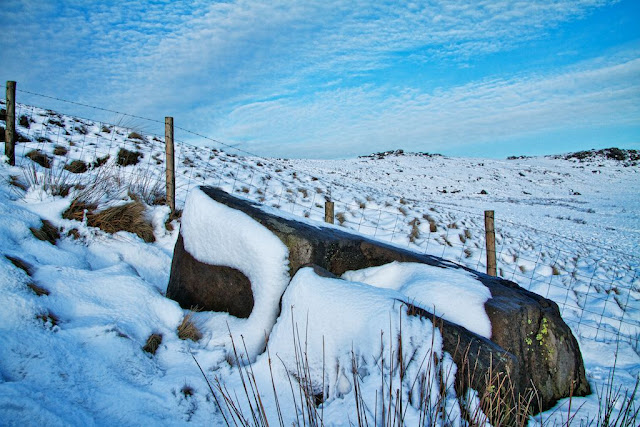 So we've reached the top of the hill and there's a lot of oddments of rock strewn about the place. 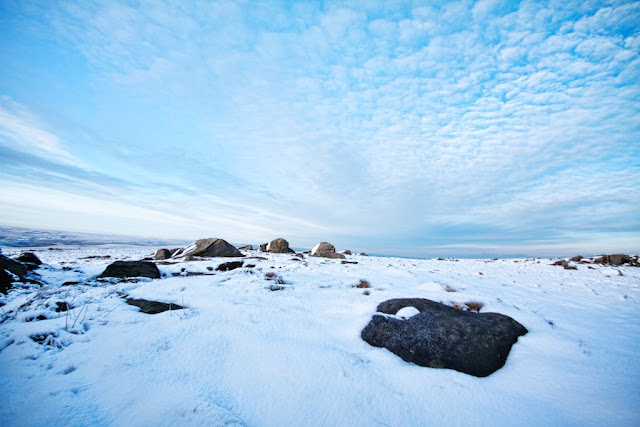 Here's Evey leading the way between the rocks. 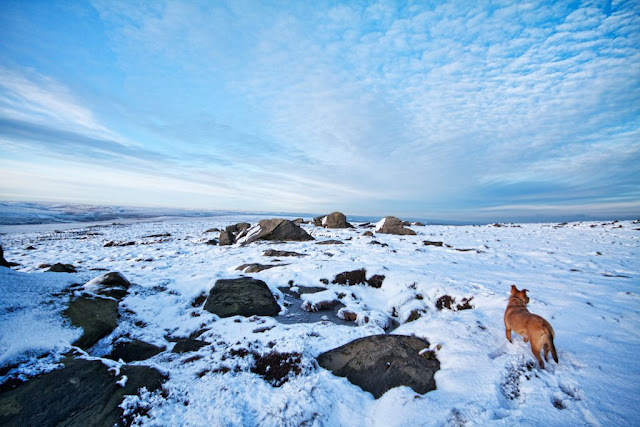 The next few photos are of some more rocks in the snow on the top of the hill. 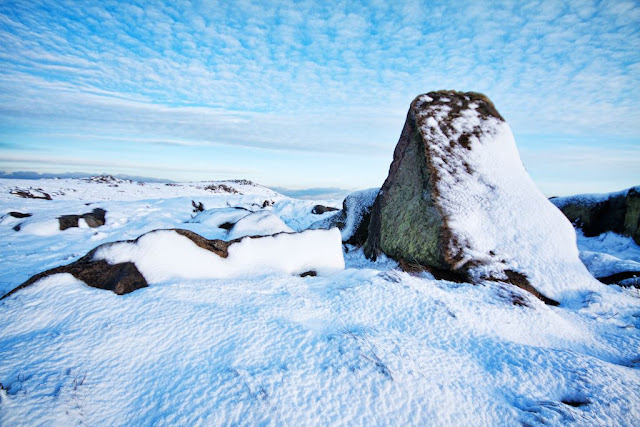 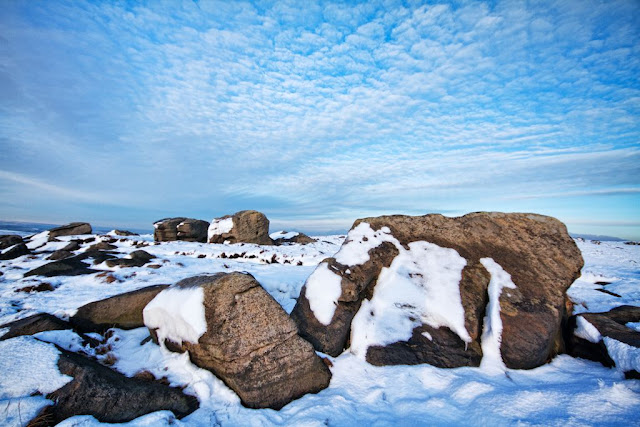 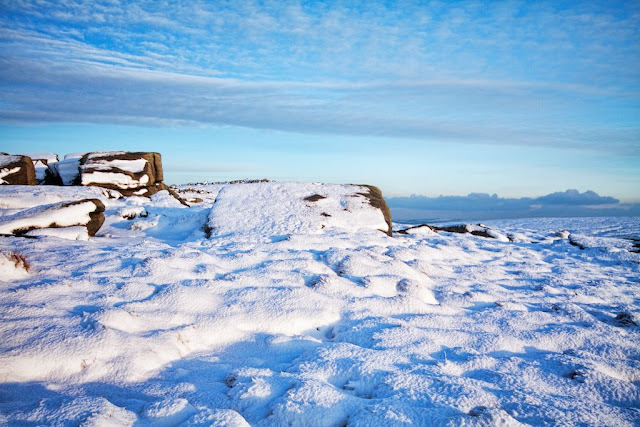 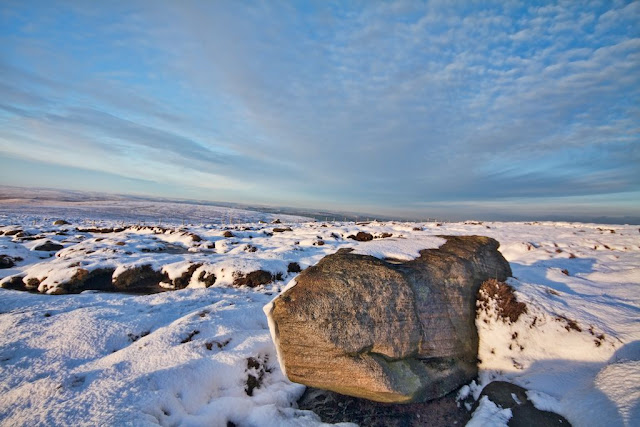 Here's Evey on the path towards the trig point.  Someone must have been here earlier because there are tracks in the snow.  As you can see by her shadow the sun is getting quite low and there's a pinkish tinge to the snow. 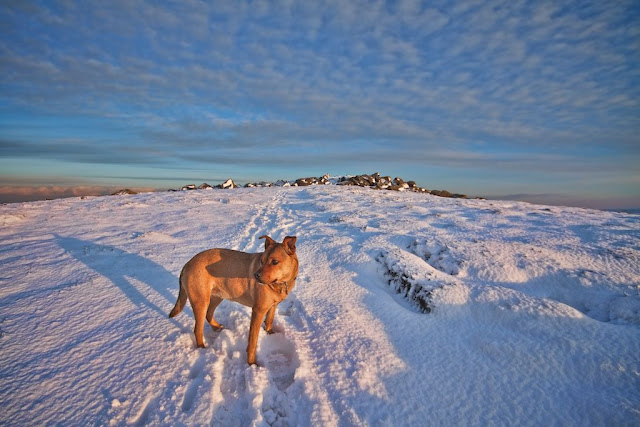 Here's the Wessenden Road again looking across towards Black Hill.  My car is parked just around the last bend that you can see in the road.    I thought the road looked like the number 3. 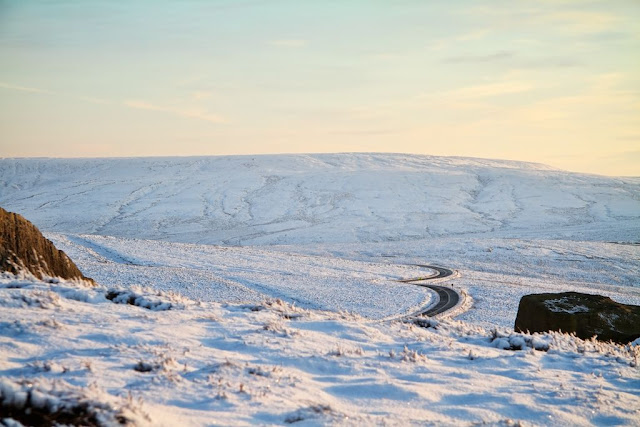 We've reached the trig point and the cairn next to it.  As we look down towards Meltham you can see there is no snow in the valley or anywhere towards the horizon. 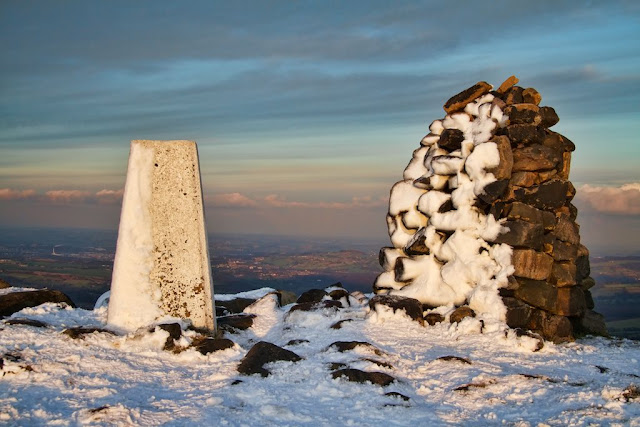 On the way back to the car it was definitely getting quite dark so once we hit the road we stuck to it as far as the car park.  Here the sun is just on the horizon and in the valley is Wesseden Head Reservoir with a bit of the sun reflecting on it. 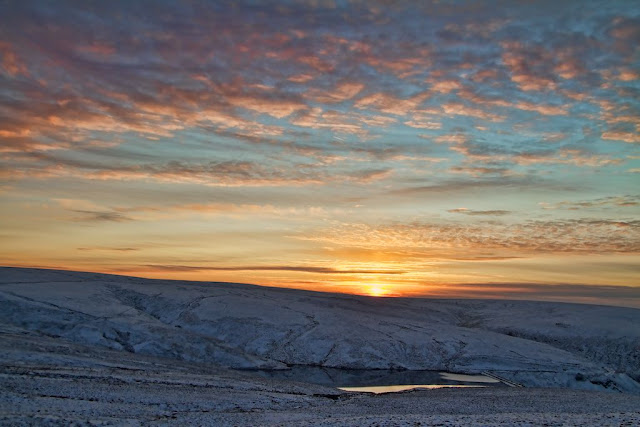 As we get closer to the car it is almost dark but the sun is still glowing orange and lighting up the clouds. 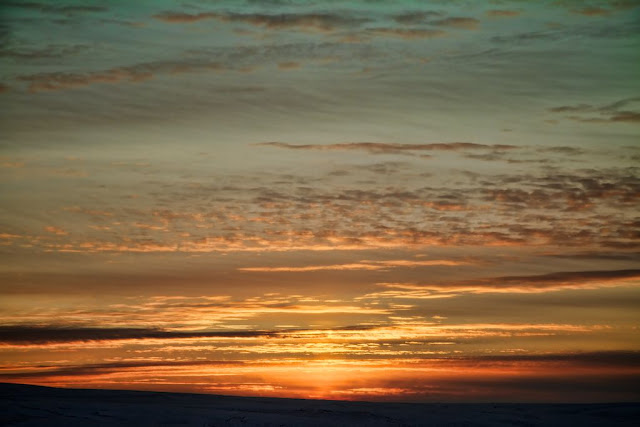 There's probably too many photos in this post but I found it hard to edit them down any more.  I actually took just over three hundred photos while we were walking so I think I've done quite well to get that down to twenty.
at July 20, 2012