My youngest daughter, Ginny, has been wanting a horse since she was very young.  We have many photos, spanning more than twenty years of her on or with horses of all kinds.  Before and since she went to university she has had riding lessons and even took an NVQ in horse husbandry at a local stables.  When she passed her first degree she wanted us to buy her a horse as a present,but it wasn't the right time and we ended up helping her get her first car instead because it was much more practical.

So now she's been working for a while and has the resources to buy her own horse.  And after a few false starts she has finally reached her goal of owning an ex racing mare called Moonlight Rose, or just Rose at the stables. Here's Rose when we first met her just after Ginny had finished a riding lesson on her.  She's almost black and looks very sleek with a bit of a shine on her coat. 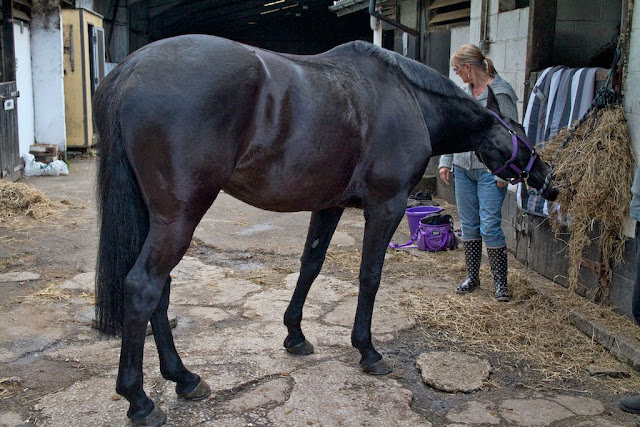 Lynne, although she says that horses are too big and have too many feet, was very keen to help groom Rose before she went back into the stable. Rose just seemed to want to eat continuously so seemed very unconcerned about the attention she was getting. 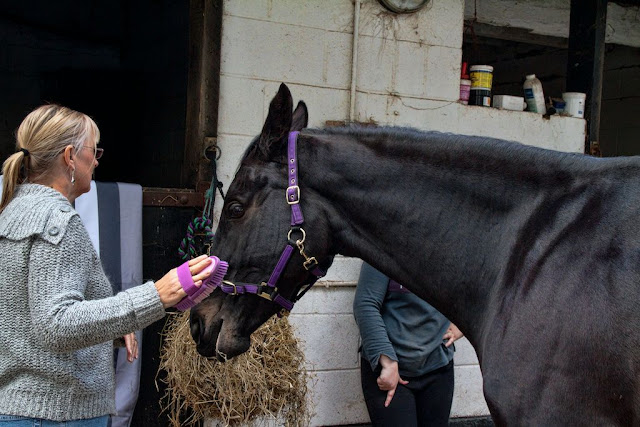 I was taking a not of photos of her and she was not bothered at all about the sound of the shutter even when I was very close up to her.  In this photo she managed to stop for a few minutes from eating the hay and seemed to be looking to see what I was doing. 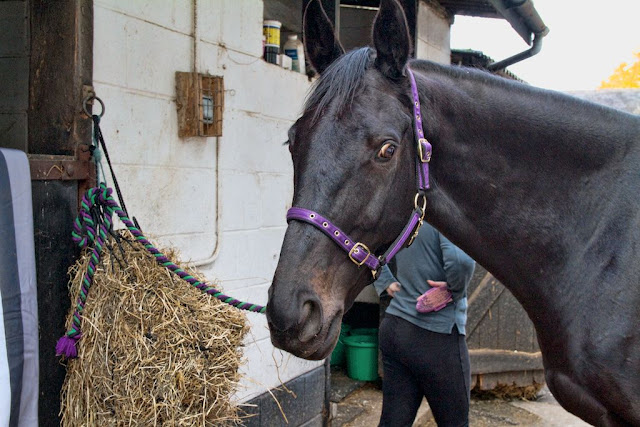 When Rose had cooled down sufficiently after her ride, Ginny put her back into her stable and Rose was looking out into the yard taking in all that happening around her.  When I processed this photo I started by cropping it square and then converting to monochrome with a reddish brown tint.   I pushed the contrast as far as I dare then cloned out a couple of silvery screw heads from the stable door because I found them very distracting.  I love the finished image, although I'm not sure whether to darken the stable wall a touch more because it's a bit bright, but then I think it gives a could contrast to Rose's head. 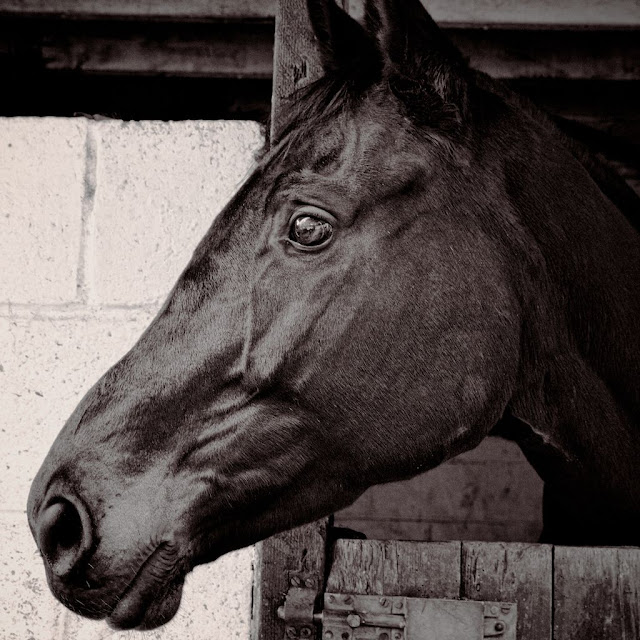 I was a bit intrigues by the catchlight in Rose's eye, so I went back to the original image and zoomed right in to get a close look.  At 100% zoom you can clearly see the stable at the other side of the yard, the trees and sky above, then right in the centre there is me taking the photo.  I was impressed with two things.  The first was that Rose must have extremely clear, healthy eyes and secondly the new camera lens is amazing.  I've not mentioned the demise of my old lens in the blog yet.  If I ever get back up to speed I'll talk about it some time. 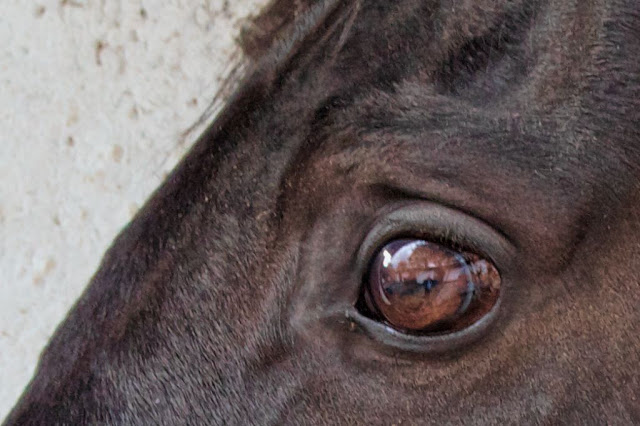 The weekend just gone we went to help Ginny move Rose to a stable across the yard, which was very hard work.  We had to remove some old rubber matting from the floor and give the floor a bit of a wash down.Then we put down the new rubber mats that Ginny had bought and cut up some bits of the old mats to fill in the gaps around the edges.  After that we covered the floor with wood shavings instead of having straw like she had in the original stable.  It looked quite smart and I took a few photos when we'd finished but nothing exciting to see really.

As a bit of a rest we took Rose into one of the fields at the stable for a bit run around with the other mares.  The first thing she did, after Ginny managed to make her leave the area next to the gate, was to have a good roll in the mud. 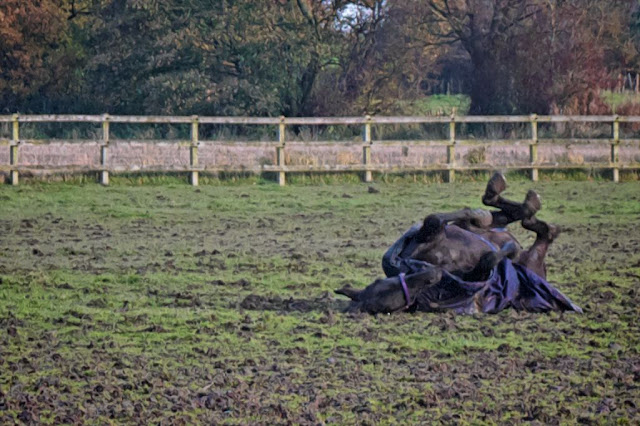 After she got up she was filthy and so was her blanket.  Here you can see how wet it is in the field. The weather has been the wettest Autumn on record and all the fields I've been in as I've been wandering around recently have been pretty much waterlogged. 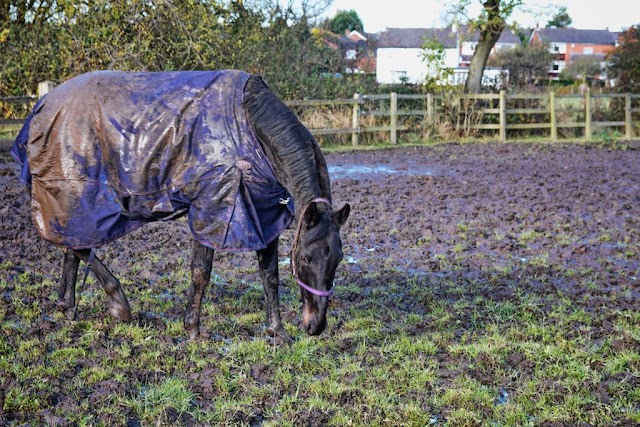 Rose had a bit of a trot around and then we left her while we went to start clearing out her original stable.  We must have cleared out about twenty big wheelbarrows of old straw and horse droppings out of the stable.  And it all had to be wheeled about 800 yards around the stable yards to the muck heap.  After we'd done maybe half of the clearing out we went to fetch Rose back rom the field and she looked as though she'd done some more rolling because her blanket was caked in mud. 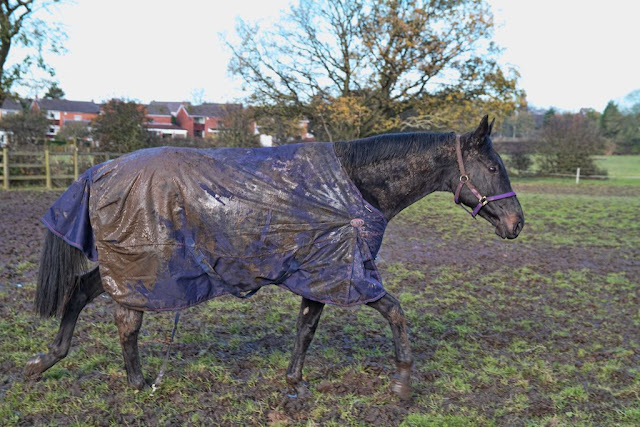 We put her into her new stable and she seemed quite content, then we completed clearing out the old stable.  When we finished, Lynne and I took the blanket to a wet area with a hosepipe and gave it a good brush and spray.  It was very hard days work, but our reward was a good meal at a local curry house so we had a good time.  Ached all over the following couple of days but we're fine now.

I hope to get some good action shots of Ginny riding Rose some time so look out for some more posts with the horse in the future.