It was our first full day in France when we went to Monet's Garden.  We had stopped at a hotel just outside Chaufour-les-Bonnieres overnight and set off in time to arrive at Giverny just as the gardens were opening.  We parked in a big car park next to a roundabout and when we set off towards the gardens we saw some signposts to Monet's bust so we followed them.  It was avery strange little path next to a stream and then in a small clearing was the bust.

Lynne was reading a sign on the side of the plinth and getting ready to take some photos with the little Kodak Playsport.  It was a nice sunny day and just starting to get warm, probably low 20s centigrade. 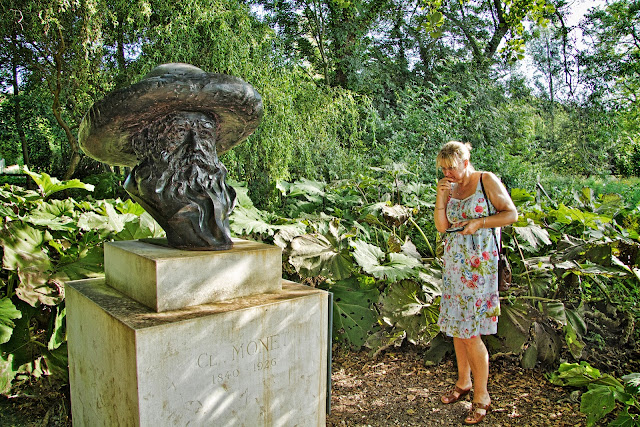 Perhaps because we'd taken the detour to Monet's bust there was a bit of queue at the entrance to the gardens but we eventually made it to the inside.  The gardens were row after row of beautiful and colourful flowers of all different kinds.  There were some structures with old looking creeping plants growing over them. 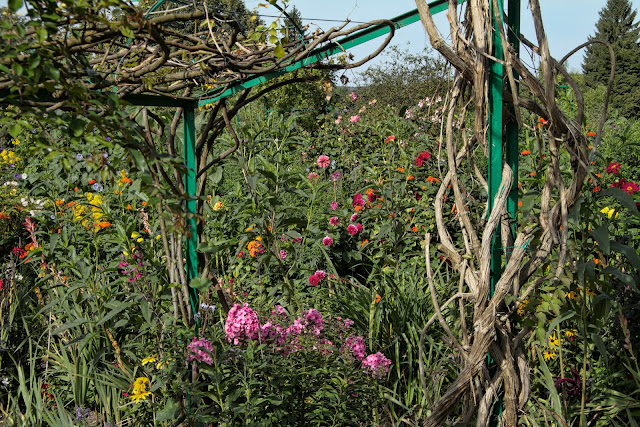 The sunflowers looked wonderful and I focused my camera on them to leave the orange flowers blurry in the foreground. 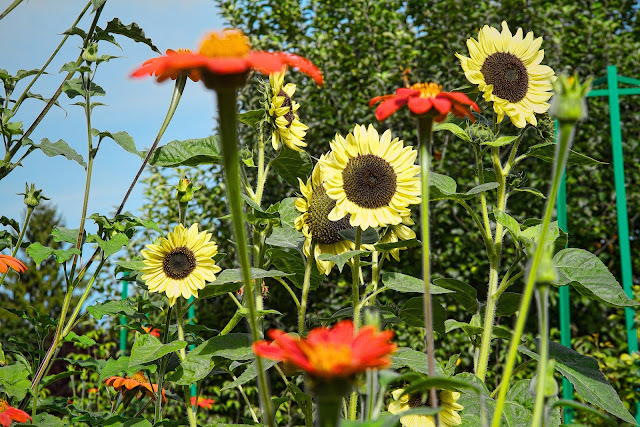 There were some lovely white lilies in one of the beds and I took this image of one that seemed to be looking straight up into the sky. 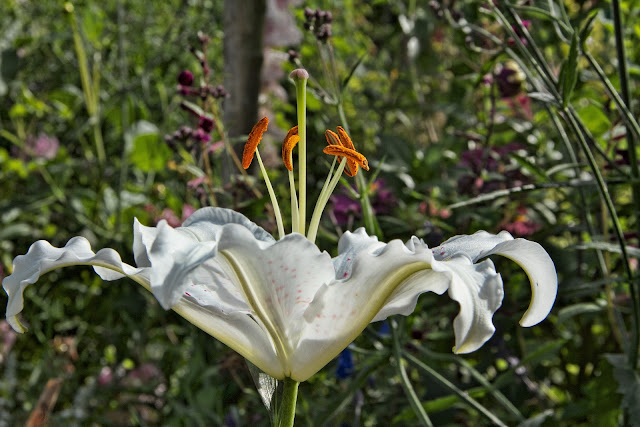 I made a black and white conversion which I think looks quite stunning. 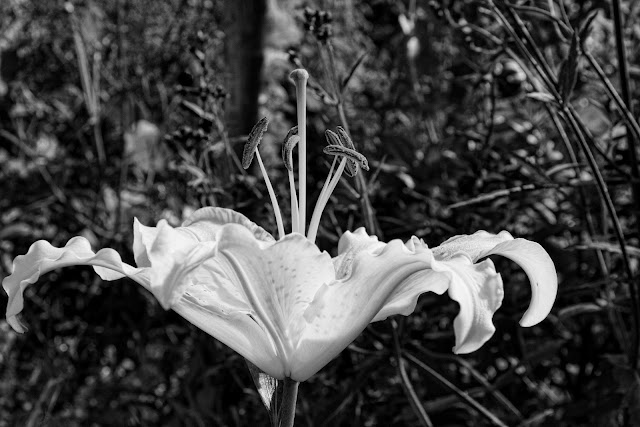 I don't know what sort of flower this next photo has but the big petals were just like red velvet curtains.  The contrast with the yellow centre and the pink and white smaller petals is amazing. 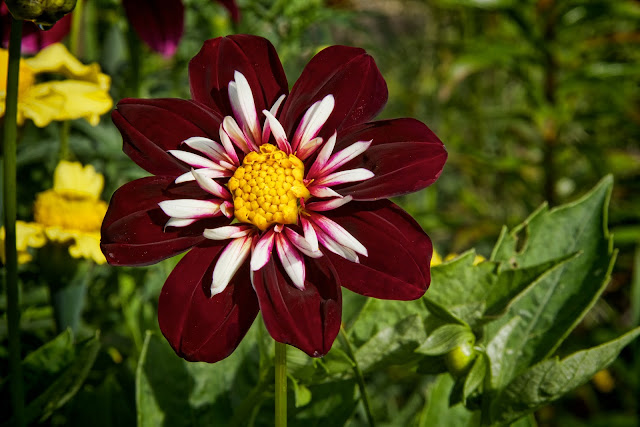 This next photo is the kitchen end of Monet's house.  We were able to go inside but weren't allowed to take photos while we were in there.  The house was full of Monet's work and also of Chinese prints, which were his passion and inspiration for some of his work.  At the far end was his studio which was down some stairs from the rest of the ground floor to make the ceiling very high.  In the studio was a wide angle photo of Monet in his studio and it was amazing to see that some of the same paintings were still on the wall, in the same places. 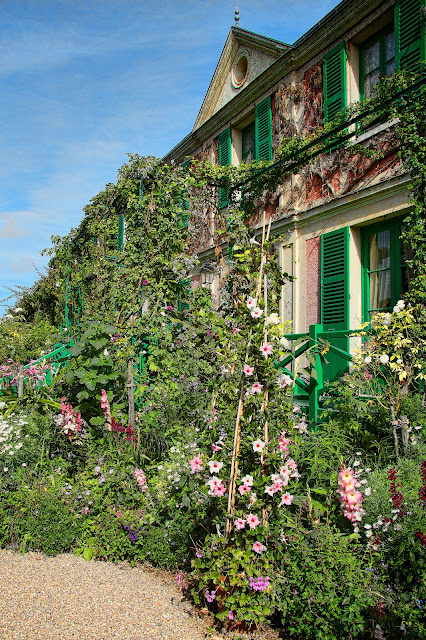 Upstairs in the house there were lots of Monet's prints for sale and they were pretty expensive, especially the ones in frames.  One of the bedrooms had the windows wide open as it was quite warm in the house.  Everyone was taking the opportunity to take photos down onto the gardens so this was one of my shots.  In post processing I've added a filter to try and give it an impressionist type of feel.  I don't think it was totally successful but I felt I had to give it a go. I might have another try with one of the other photos and see if I can get it looking a bit better. 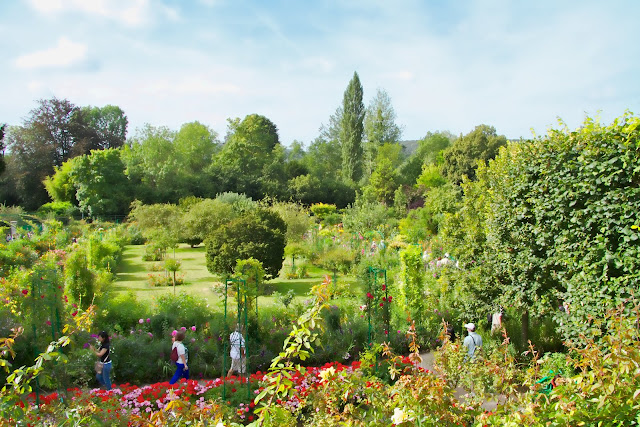 We made our way to the Japanese garden which was at the other side of the main road and was reached by going through a subway.  This garden was far less formal than the garden by the house and contains the lake with the waterlilies that feature in some of Monet's paintings.  There were some of the same structures in this garden so I used one to frame this photo across the lake. In the distance you might just see the roof of Monet's house behind the trees. 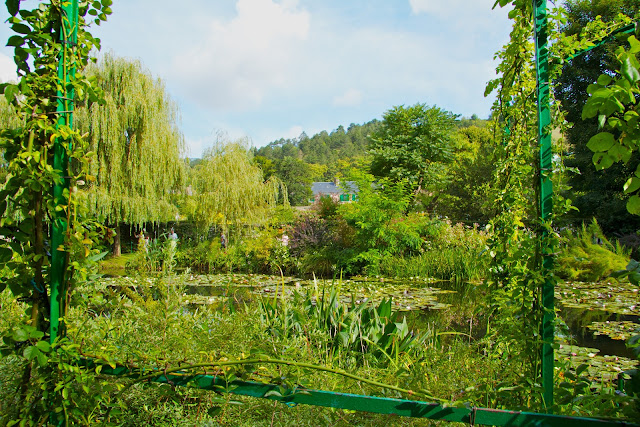 I managed to take a photo of Lynne on the famous bridge from Monet's paintings.  It's a pity I couldn't get one of her there on her own but it was getting quite busy and the bridge was a popular place to stand and look over the lake.

In the shop at the exit of the gardens we bought ourselves a print of one of Monet's paintings which feature the bridge with waterlilies below.  I need to put it in a picture frame and put it on one of our walls. 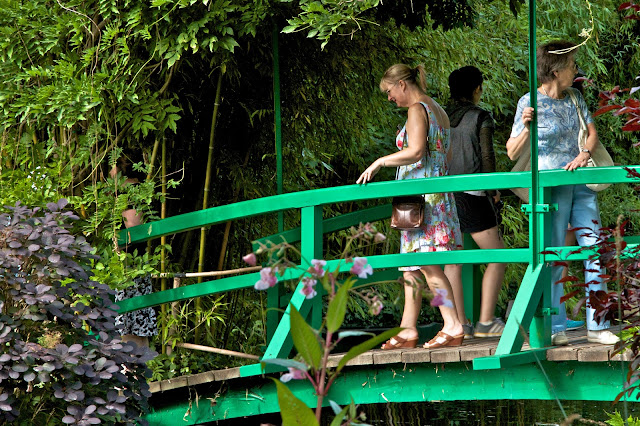 At the other side of the bridge was a little bit of the lake with a couple of row boats next to the tree.  I like the way thee reflections in the water mirror the boats and the bamboo behind. 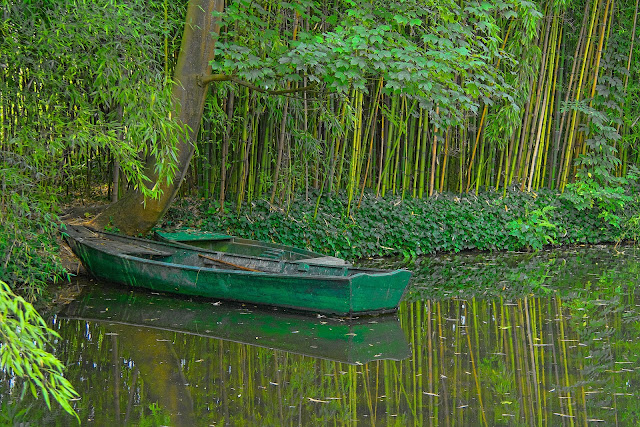 We walked to the end of the lake and I took a few more photos of the boats from different angles.  In post processing I added some grain to this photo to try and give it an old look and I was quite happy with the result.  It may be one I'll print out quite big and frame it to hang on the wall. 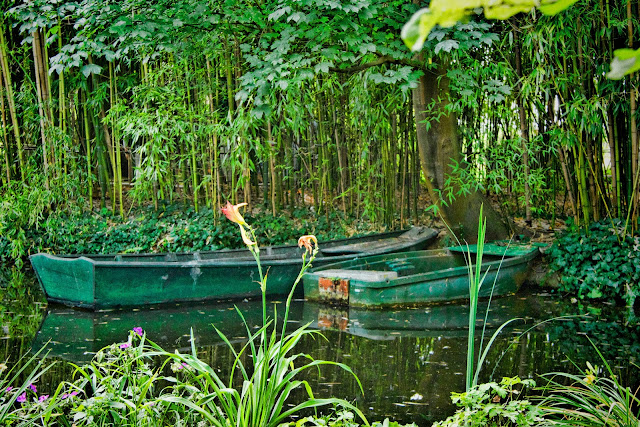 After visiting the garden we continued our journey South towards the gite we were going to stay in for a week just outside Riom, near Cleremont-Ferrand.  Our next stop was to stay in a Chateau on the edge of a big lake on the South edge of the city of Bourges.  Next time.
at October 06, 2012