Stream in the Holme Valley

The weather picked up a bit on Saturday afternoon but it was still quite dull. I decided to pop out and take a few pictures before it got dark. I had promised myself to come back to the bridge I crossed a while back and make some image s of the stream, so this seemed the ideal opportunity. There is a bit of a walk from the road to get here so I didn't stop to take many photos on the way.

The overcast sky allowed me to slow the shutter speed down on a lot of the shots so that the moving water would take on more of a silky texture. I didn't get too far down the valley before I reached a waterfall where the valley sides were very steep and dangerous. As it was getting dark I headed back up the valley and took a few extra shots. This first shot is of the bridge and was taken hand held but most of the later shots were taken on a tripod because of the long shutter speeds. 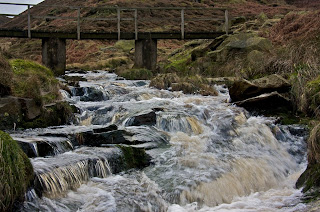 This second photo it a little way down the stream at the bottom of a small stretch of rapids. The water hits the pool and creates some swirling foam in the water. There are quite a few other pictures from the day in the Streams album on my gallery site. 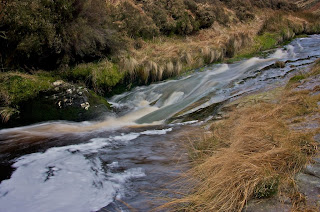