So we've had the most snow for 18 years and I thought a walk around the paths and roads at Digley would give the opportunity for some good photographs. From the Northside Car Park I decided to walk across the dam wall towards the South Car Park and then along the Southside path to Bilberry. This first photo is looking up Digley reservoir with Bilberry dam wall in the distance. 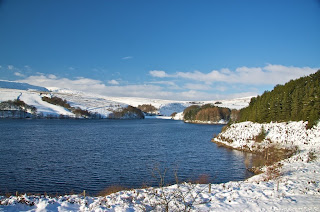 Along the path the fields were covered with snow and at this particular field the snow was very bumpy. I like the way that this photograph has the texture of the shadows in the snow in the foreground and the fir tree at the top. From here we walked down to Bilberry Reservoir which was completely frozen over. Unfortunately while I was swapping lenses I dropped my lens into the deep snow and it got completely wet through. I tried to dry it out but I found when I downloaded the next 50 photos that they were all blurred because of condensation inside the lens. Later I had another try at drying the lens out and then after that the photographs were better again. 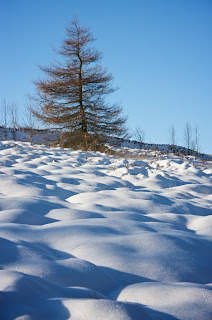 Here's Evey climbing out of the deep snow on the path and into the field where the snow was much less deep. Soon after I joined her when the snow drift in the path was up to my thigh and making wallking very difficult. 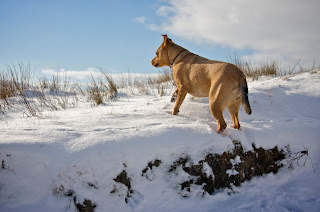 There are a few old quarries around Digley where I guess they took the stone for all the drystone walls, buildings and maybe the reservoirs too. We walked into one of the quarries and found these massive icicles inside. It wasn't possible to get down near them but I would think they were about 6 to 8 feet high and very impressive. 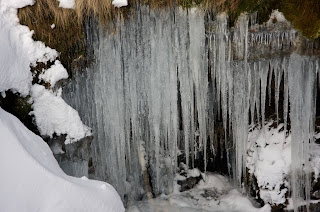 The old roads were very deep with snow and the farmers had left tyre tracks where they had driven their vehicles around the fields. There are more photos from this walk in the album on my gallery website and I may add some more photos later as I took quite a few (about 300). Have a look around and let me know what you think. 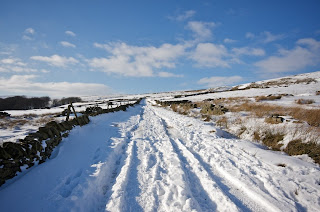