I've been very remiss with blogging the last few weeks so here's a quick catch up. Since the snow the weather has been pretty overcast most of the time so it's not been the best for taking photos. On the brighter side though I have bought a new lens for my camera which is a big(gish) telephoto zoom to replace the old one that I bought on Ebay for £50. It's a Sigma 120-400mm which on my camera gives it a long range of around 13 X normal (640mm).

I was having a few days holiday so in the afternoon I bought it I went to find somewhere to try it out. I went to one of the local reservoirs first but it was really cold and windy so I drove around looking for somewhere else to go. Ended up driving for a while but ended up at Worsborough Country Park near Barnsley. To call it a country park was a bit grand but for Barnsley I guess it was close enough. Took a few pictures of seagulls on the reservoir and on the way back to my car a couple of photos of a squirrel up in a tree. 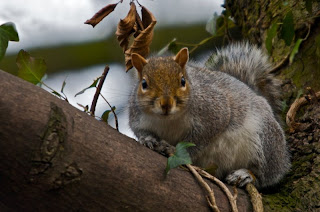 The following day I decided to look on the internet to find a better place for taking photos and found a Yorkshire Wildlife Trust place called Potteric Carr which looked promising. Again it was a bit dull but the sun came out for a bit every now and then. When I first arrived I was a bit self conscious about having this big lens on my camera but by the time I left after seeing what the other photographers were toting around I was feeling totally inadequate. There was't a great number of birds there and they all seemed very far away so I didn't get many decent shots. The saving grace was this young swan that was in a small pool next to one of the hides. 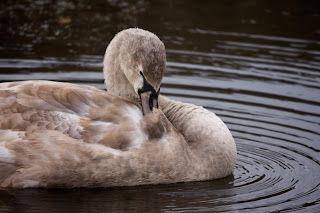 The next day I had some jobs to do but the following day I had planned to go back to the waterfalls near Holme village that I visitted last year near the end of a long walk from Crowden. I thought that with the last of the snow melting there would b plenty of water coming down the waterfall and I was right. It was a dull day again but it didn't matter because there waterfalls are generally in the shade anyway. There was still a patch of snow near the waterfall that hadn't yet melted even though it was nearly two weeks since the snow fell. I didn't use my new lens for the waterfall shots but on the way there I used it to catch a few fairly poor shots of the grouse in the distance. 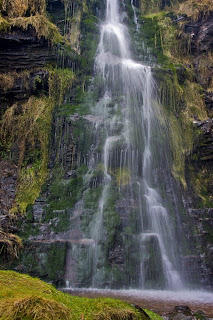 A couple of days later the sun did come out for a while but it was still quite cool so I headed to a reservoir that I've not visitted before near Bradfield. Dale Dyke has a path around it which was quite muddy and at the top end there is a path through the woods up to Strines reservoir. There is no path around Strines but it was very cold and windy when I reached it so I wasn't too bothered. After walking around the reservoir I headed up a path that went up one of the adjacent hills so I could take some shots looking down at the reservoir. 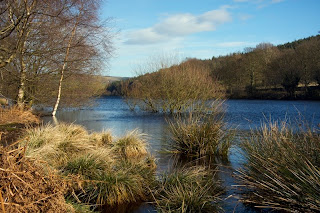 So that brings me up to date as I haven't taken anything useful since. Not really had a good opportunity to exploit my new lens but I'm considering visitting a couple of RSPB places at Fairburn Ings and Dearne Valley so hopefully they'll better suited.
at March 04, 2009

The swan is GORGEOUS!