As what seems to be the norm at the moment the weather was a bit dull and cloudy when I have the opportunity to get my camera out, but I decided to make the most of it and set off for Fairburn Ings early. It wasn't open when I arrived but there is a second car park further along the road so I went there for a while. there is a bit of a path here but I didn't see much until I got back to the car park and got this close up shot of the swan. 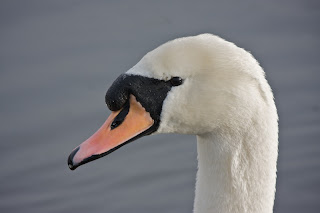 So then I went back to themain car park which still wasn't open but another car arrived and a chap got out to talk to me. I aske him when it opened and he said it was unusual for thegate to be locked but it should open very soon. He was teling me as we were waiting that he comes here three times a week and he loves the place. He told me all about everything that was in there and which way to go (not that there is a lot of choice). I met him again later and we had another chat. He was telling me he still uses a film camera and he was very interested in mine as he was considering going digital.

Once inside I went to the kingfisher wall and saw a quick flash of something that may have been a kingfisher but I couldn't be sure. A chap with a camera, big lens and tripod turned up and told me he had taken a good photograph of the kingfisher yesterday (so I guess he was back to take a better one today). I didn't see anything else so I left him to it. On the way back I managed to get a poor photograph of a woodpecker here but still didn't see a kingfisher. 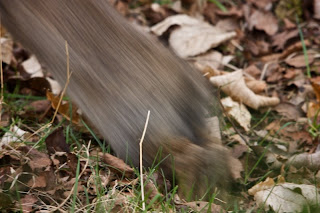 A bit later I went into a hide a there were a few birds which I managed to get some half decent shots of including this shell duck exercising its wings. 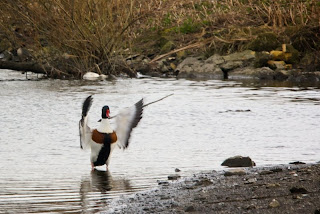 I was just about to leave the hide when a couple turned up and I didn't want ot make it seem as though I was leaving because they had come in so I stayed a little longer. Then a little egret suddenly appeared, playing in a pile of twigs off to the left and then it hopped into full view directly in front of the hide. Managed a few shots before my memory card got full but it flew off while I was changing to an empty memory card. 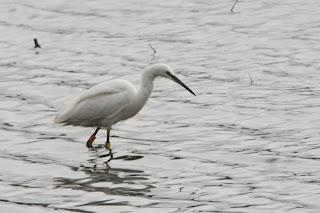 As I was heading back along the woodland walk I heard a noise in the undergrowth and spotted a little brown animal with something in its mouth running along. I spotted it agaiin running along the path in front of me and fired off a number of shots . Unfortunately in my excitement I didn't have the camera set up properly so the shots were very dark but managed to boost them enough to get a few poor shots of this little stoat with a frog in its mouth. 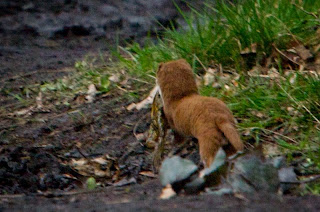 Back near the wildlife shop there was this red squirrel up in the tree. I wonder if its one that Liza was being warned about? 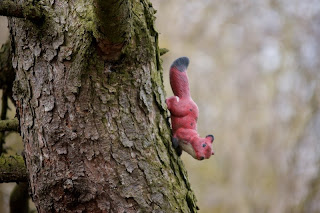 It wasn't the most successful visit but there were definitely some highlights and I will come again when the weather is better and maybe I'll get some better shots. I have posted a few more shots from the day in my galleries.
at March 08, 2009