So I thought I'd make another attempt at walking part of the Pennine Way starting from the Snake Pass, but when I arrived there at 7am on Sunday it was shrouded in low cloud, again. I thought it might clear so I set off walking but it was very cold, windy at pretty miserable so I went back to the car. On the way there there had been quite a bit of sun on the lower ground so I headed back down to Derwent Reservoir where it was much clearer, brighter and warmer.

I've taken photos around here before and thought that this time I'd do more walking but take the opportunity to take some images suitable for processing to HDRs. Basically taking multiple shots with different exposures that can be merged into images with a High Dynamic Range. There is a setting on my camera which will automatically take a set of three images with different exposures which can be used for this purpose. A few weeks back I downloaded a trial version of Photomatix but I hadn't anything suitable to try it out with so this seemed an ideal opportunity.

The wall of this reservoir has some really dramatic towers at each end and the wall in between acts as the overflow and when the water is high it creates an amazing waterfall. Unfortunately today the water level was a little low but it didn't adversely affect the aim of the exercise.

This is the first image of the set of three that is at the correct exposure and has had basic processing to boost the contrast and colour saturation. To be honest I very much like this photograph and would be quite happy to put it into my online gallery and make a print to put up in my study. The subject is great, the composition is good with the nearest tower having wonderful detail and texture. The far tower almost mirrors the near tower and the wall between forms a fairly strong leading line. After that there are lots of little details to discover, the house in the trees on the right, the small building on the far bank on the left of the near tower and the path leading up from the bottom right. 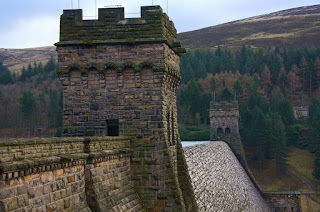 This next image is the HDR produced from the Photomatix tone mapping and after experimenting with the settings for quite a while I think has produced quite a pleasing result. The stonework and the background have a lot more contrast which brightens the whole image considerably. I've tried not to push it too far as sometimes I find HDRs take on a very artificial appearance, which isn't necessarily bad, but not what I was trying to achieve. When I compare this to the first image I am seeing that the first image is actually quite dull. 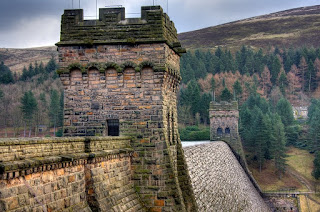 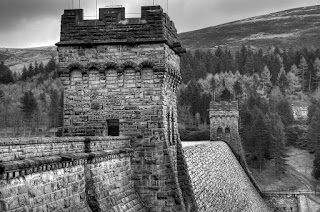 This is my first experiment with HDR and I think I can see why many people are so enthusiastic about it. Apparently the human eye can see around 8 levels of exposure value (EV) whereas a digital camera can only capture about 5. By adding an extra EV above and another below and combining them we are reaching around 7 EV in the HDR. I guess using more starting images or spreading the range of the three exposures could push this a little further.

Overall I'm liking the black and white version the best and I'm definitely going to make an A3 print to put on my study wall. I took quite a few other sets of images on the walk so I'm going to do some more experimenting of the next few days and maybe I'll post again later in the week and add some other pictures into my gallery.
at March 17, 2009