Now I hadn't set off with the intention of making more bird images but the opportunities just arrived as we walked. I'd set my target on walking from Wessenden to White Moss via Black Hill to give me and Evey dog some much needed exercise. It was a bit overcast and cool when we set off but within a short while the temperature began to rise and I was getting pretty warm from the exertion so I ended up carrying my jacket for about 90% of the journey.

Heading towards the foot of the climb to Black Hill I spotted a red grouse in the distance and took a quick snap. They're nothing out of the ordinary here but I thought I'd get the camera warmed up. It wasn't until I got back and looked at the image on my computer that I spotted the babies, at least two and maybe another couple hidden in the grass. Behind the grouse there was a group of 8 or 9 walkers on a different path who were also heading towards Black Hill 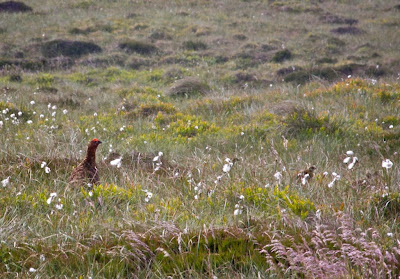 The climb up to Black Hill is quite steep but I was rewarded by this Golden Plover sat up on top of a little bank not too far from the path. I made a few initial shots from the path with the bird up on the horizon and then slowly headed towards the bird for some closer shots. I had to get Evey to stay behind me because the bird was looking quite nervous as we approached. Evey was very interested as the bird was continually squawking. 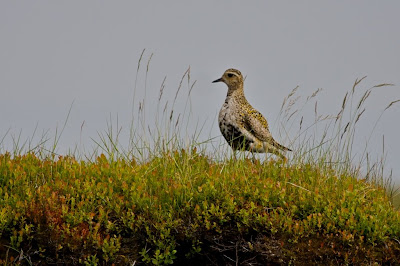 Another few steps closer and the Golden Plover was starting to walk away from us still squawking but quite unhurried and showing us the beautiful feathers on its back. I moved a few steps closer but I guess we'd entered its personal space and it flew off a few meters. I didn't think it would have let me get any closer if we'd have pursued it so I went back to the path. 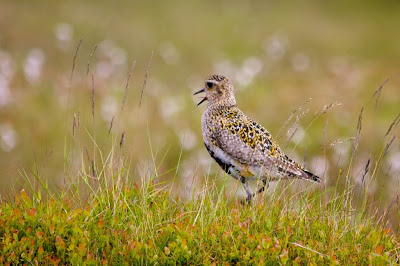 At the Black Hill trig point the walkers I'd seen earlier had stopped for a break so I had a chat with them. They were heading for Edale which is about a 25 mile walk from where they had started at Wessenden. I told them that I wasn't going too much further, just to White Moss and then I would ead back to my car because I was going to Honley Show with the family in the afternoon. One of the guys said he thought that this part of the Pennine Way had been spoilt by flagging it and that he had to practically swim to the trig point on previous visits. I have to disagree because it makes the area more accessible and also protects the peat land from being damaged by people walking all over it instead of keeping to the paths.

I headed South East to try and pick up the path to White Moss as it is a bit undefined around here. There are a lot of small pools in the peat bogs and I was trying to make some images of the sky reflecting in the pools but with very limitted success. As I was knelt down trying to get some low shots across the water another Golden Plover landed behind me and started with it's squalking again. I don't know if it was the same one but it was just as noisy. This time the bird was heading toward me across the dried peat and showing its dark coloured chest. 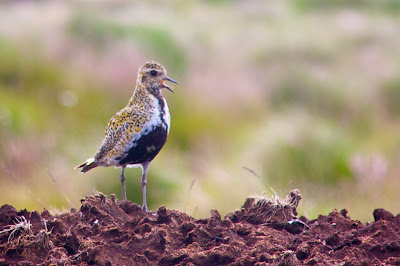 We found the path and started heading down from Black Hill towards White Moss and the sun was starting to get quite strong. I took a few more images as we walked of the views including some images ready to tone map in HDR. When it got to a little after 10:00 we headed back as I thought it would take us about 2 hours to get back to the car.

As we headed back up towards Black Hill there were lots of little birds flitting around and I managed to get close enough to catch this one perched on the top of a juniper bush with an insect in its mouth. I thought maybe it was a Sky Lark because there were some little birds flying high and singing away. The thing is that little brown birds are quite common and they all look the same to me. I had a look on the RSPB bird identifier site and its more like a Bunting or a Pipit of some kind. The Larks seem to have a bit of a tuft at the back of the head so I think it rules them out. 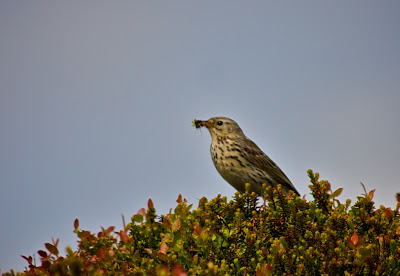 On the way back down Black Hill I spotted another little brown bird sat on the top of a white post withe something in its mouth. As usual I fired off a few quick shots and then moved in closer for some better shots. I think it's the same sort as previous bird but at this angle it looks shorter and fatter. As I got cloer I could see it had several things inits mouth and it didn't seem to bothered about me getting closer. Unfortunately there was a man with his son following me down the hill and talking very loudly (apparently he thought he was going to lose his job because the company was making cuts and the bloke that worked for him could do his job but was paid a lot less) so I had to get the shots quickly before it flew off. In fact it didn't fly off but I think I got close enough. 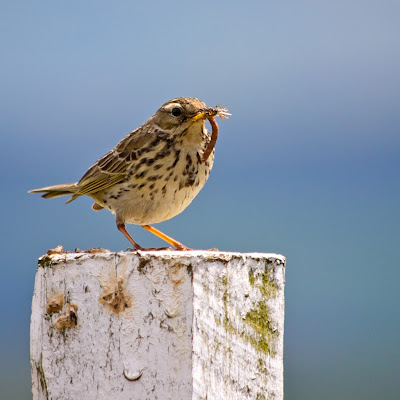 I suppose this all goes against one of my previous posts where I gave reasons why I couldn't be a nature photographer. I still don't think it would be something that I would limit myself to doing and I can't afford the expensive glass but I get a buzz from making images of wild animals and birds. I must get back to one of the local nature reserves and see what's happening now and I'm looking forward to going to France on my holidays because our first stop is at a bird park .
at June 15, 2009