We had a late Fathers Day because 1. my presents hadn't arrived from Amazon and 2. nothing got organised. Anyhow on the Wednesday we went out for a meal and I got some nice cards, a photography book (The Moment it Clicks - Joe McNally) and the Creative Aperture Kit for my Lensbaby.

With any lens there is an effect where within the out of focus areas any points of high contrast take on the shape of the aperture. This is called the "Bokeh" and usually nice bokeh in high quality lenses is as circular as possible. This is achieved by having a big number of aperture blades and making them slightly curved. Cheaper lenses tend have as few as 5 straight aperture blades which gives the bokeh points a pentagonal shape.

In the Lensbaby the aperture is changed by using little rings that are droped into the front of the lens and held by 3 small magnets. All of the standard aperture rings have perfectly round holes in them which is why the Lensbaby bokeh looks so good. However the Lensbaby is a creative peice of equipment and using aperture rings with different shaped holes can give the images a quite novel look.

The kit comes with a star shaped aperture, a heart shaped aperture and 5 blanks that may be made into any shape by the use of a sharp knife. In these first images I have just used the supplied apertures and I am considering ideas of shapes for the others. I guess I will wait until I have some more ideas for images I want to take and then cut apertures to suit the subjects.

In this first set of images I have used light coming through trees to provide the points of high contrast. Other ideas I have had so far are light reflecting from the surface of water, street lights in the distance in a dusk or dawn shoot or brightly coloured flowers in a field. I wonder if dark points on a light background would also work? In which case dark flowers in a light coloured field or dark spots in snow or a flock of birds in the sky might work.

So to my first image which was taken through the open window of my study. The plant in the foreground is a Cordlyne which we planted when we landscaped the garden about 7 years ago. When it was planted it just looked like some long leaves growing out of the ground but each year more leaves sprout from the top and the ones at the bottom die back to reveal a long thin trunk. The plant is now well over ten foot high and for the first time has sent out this rather strange looking flower. The trees on the banking behind the garden supply the light for the star shaped aperture. 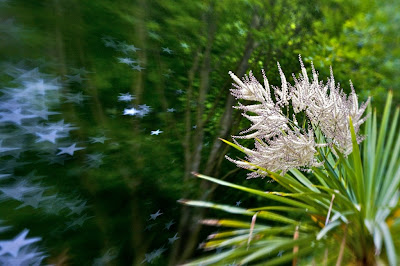 Behind the Cordyline we built a decking with an open timber roof which we have been training a honeysuckle plant to grow over the top. This next image is showing the honeysuckle flowers starting to open with the same tree background as the first image. 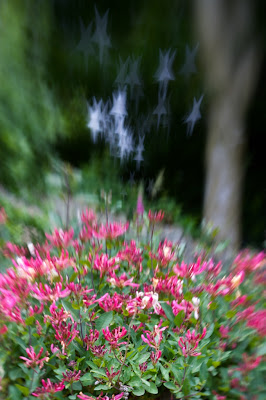 Further along the banking there is a nice clump of fern with the wall and the trees behind. This time I've used the heart shaped aperture. 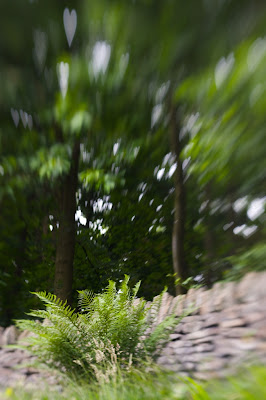 While I had the heart shaped aperture in the lens I went back and made another image with the honeysuckle in the foreground. 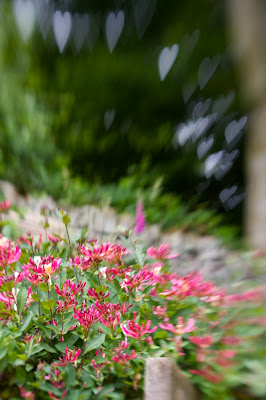 At the weekend I went for a walk in one of the nearby woods with one of my aims to make some more Lensbaby creative aperture images. To be honest I was struggling to find some good subjects which had the requisite light through the branches for my background. This first one would probably have been the best shot but the stairs are well out of focus, even for a Lensbaby image. 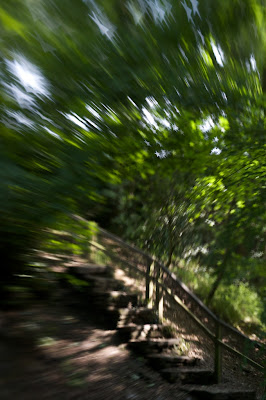 In this next shot I was actually trying to get the flying insects to be my main subject but again my focus was not where I wanted. Intrestingly however, because of the fairly slow shutter speed the insects show as dotty lines where their wings are opening and closing as the fly along. It's hard to tell with the image size on the web but looking close up at the ones towards the edges of the image they are taking on the star shape where the wings are open. 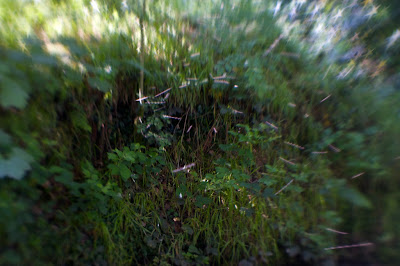 Final image from this set and again the focus suspect (it was quite dark in the woods and my eyes are getting old). However I quite like the way that the lighter coloured leaves in the background are also taking on the star shape from the aperture. 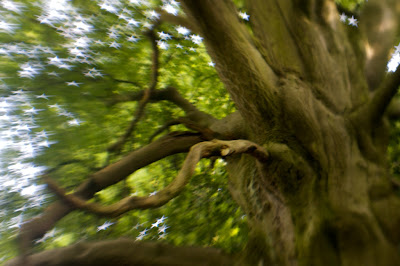 I'm quite looking forward to more experimenting with the creative apertures and I will post more as I progress. My problem is that being relatively new to photography I'm jumping around using different techniques and equipment and trying to get to grips with a wide range of things at the same time. The thing is that I don't want to concentrate on one area for too long and I'm looking to combine bits together to make different types of images. I guess eventually I may come up with a style of my own but until then I'll try a bit of everything. Tomorrow I hope to post some more attempts at capturing Lapwings and Curlews (still not satisfied with the results but I'll keep trying).
at June 30, 2009