Back on the 15th August we set of at 4am to drive from Holmfirth down to Dover to catch the 9:30 ferry to Calais. It really does seem such a long time ago now, after all I'm a year older than when we set off. We had booked a gite in the Loire valley starting on Thursday and we were stopping in hotels on the way down at various places in France that we'd never visited before. The first stop was near Le Crotoy on the Somme estuary a little way down the North coast from Calais.

We stopped at a little town called Rue for lunch (magnifique) and then went down to Le Crotoy for a look around. Didn't like it, too busy, nowhere to park and a bit tacky. Decided to got to the hotel which was near St. Firmin and on the way have a look at some small lakes that we'd seen on the map. The are around the lakes called itself Petite Carmargue which I think was a bit of wishful thinking but it was very pleasant. There were quite a few birds on the lakes and these are a few shots I took.

This duck (don't know what sort) was very keen to have its photo taken. Unfortunately the sun was mostly in front of us so it wasn't ideal to get good quality images but I quite liked this one. 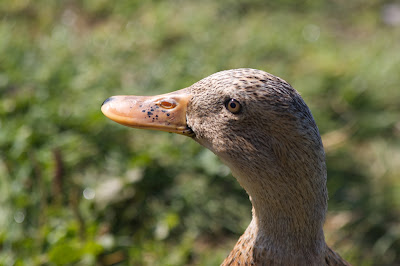 There were loads of swans and I've always found them a bit vain when it comes to taking their photos. I did take some photos of a black swan too but I wasn't too happy with how they came out. As before the sun wasn't really in the right place for quality images. 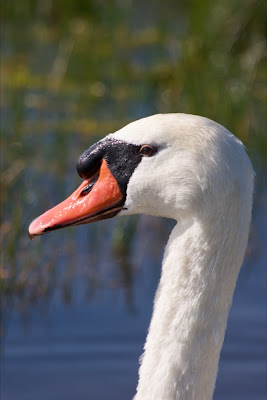 A group of swans decided to fly off and I think this was best of the photos I got of them as they rose into the sky and circled around. You might just be able to make out a Little Egret stood on the far bank of the lake. 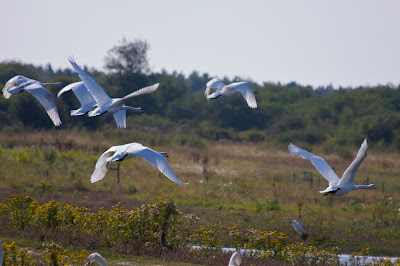 This was one of the swans coming back into land. I took a few images of the bird skimming along the water and finally coming to rest but I didn't have my camera set to the correct focusing mode so as it moved away from me as it landed it also moved out of focus. It's a bit of a shame really because they would have been quite good, I might still put one in my gallery and hope no-one noticed how bad it is. (Note to self, put the camera into AI Focus mode when shooting moving subjects.) 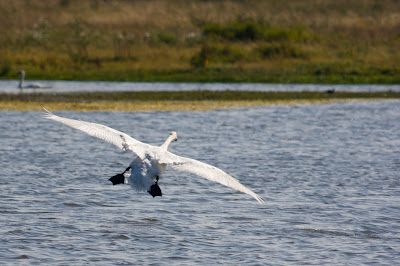 After we booked into the hotel we went to St. Firmin and had a little walk around. It had a beautiful little church with a lovely memorial in front. 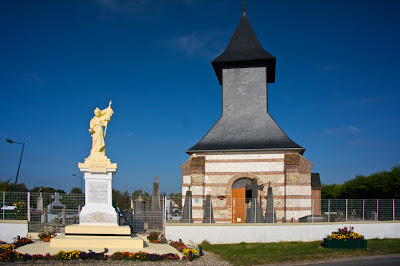 Around the village there was lots of farm land and many of the big houses had their own stables. I think it must be mainly quite a rich area as everything was very clean and tidy and there were lots of flower displays around the village. 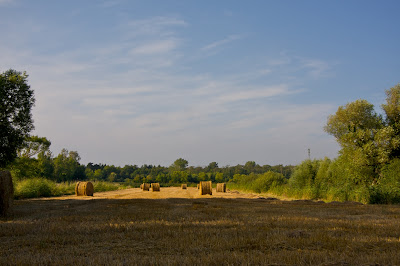 There was one exception which was this old corrugated iron garage/shed and the accompanying lamp post which was totally overgrown with something. While we were wandering about we had seen some signposts which were going on about a walk to the beach so we got back into the car and followed the signs. We arrived at a spot where there were a few cars and bikes parked so we thought we'd follow the path. 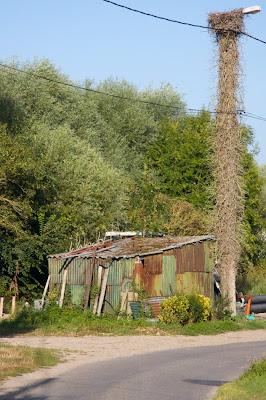 Because we'd had a big lunch we weren't too bothered about having much (or anything) for dinner. It was getting a bit late by now but we thought a bit of time on the beach would be nice. After a short time we reached a bench and I said it was probably to have a quick rest at the halfway point in the walk. Then I joked that it was the first of ten benches along the path. It wasn't a good joke and turned out to be very close to the truth. The path was very heavy going as it was very soft, fine sand that you sank into as you walked and sapped your energy. I got to a point where I said that if we didn't see the sea over the next hill I was going back. A number of people passed us coming from the direction of the sea and gave us some funny looks. We just assumed that they knew we were English and probably a bit crazy.

At the top of the next hill I still couldn't see the sea but there was a sign proclaiming it was another 100 meters (300ft) and that the distance back to the car park was 3600 meters (2.5 miles). Well after walking so far there was no way I was going back without seeing the sea. One more big hill and it's got to be there. 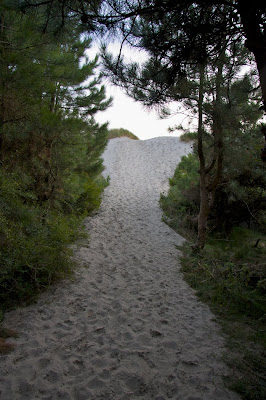 And "voila", here it is, although still a few big dunes to cross before we could paddle. 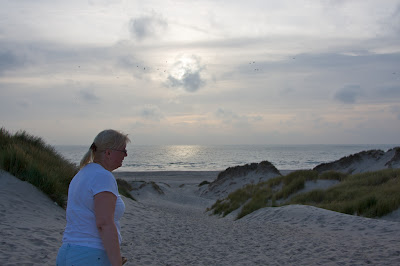 And paddle we did, although it was starting to get a bit dim and we were now the only people on the beach for miles. 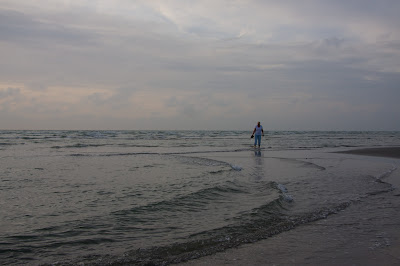 I even took my shoes off and rolled up my trousers to get the benefit of the cool water. 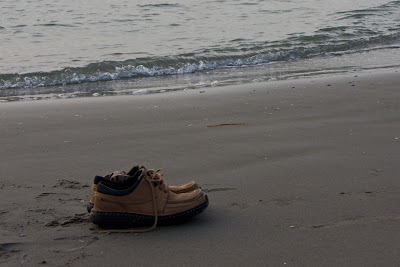 The seagulls were fishing. The one to the right of centre was hovvering and then suddenly plunged into the waves. 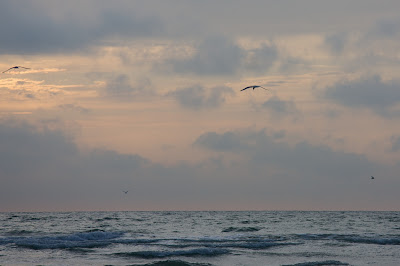 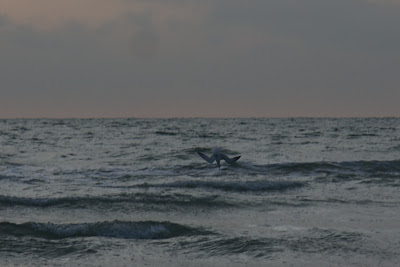 We watched the seagulls for a while because we'd never seen them fish before. We'd only seen them steal chips at Whitby and Blackpool or scavenge through the waste sites near the towns.

The beach was massive and stretched for miles to the South ... 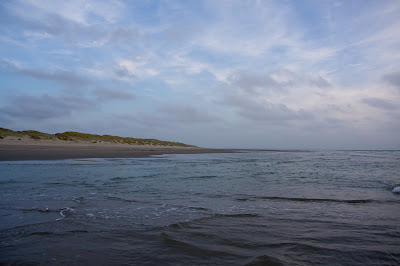 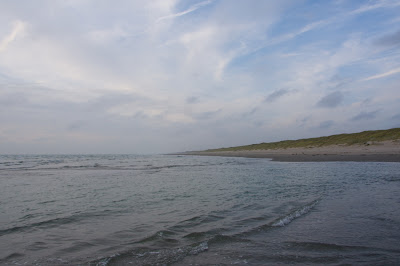 As we left the beach the last of the sun was disappearing behind the clouds. 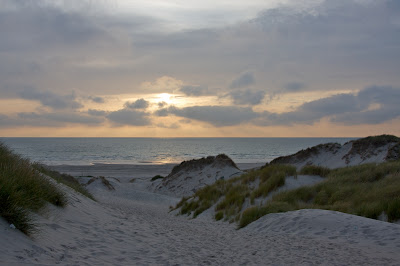 On the way back I took this photo of a lovely flower that lines the path in certain places. 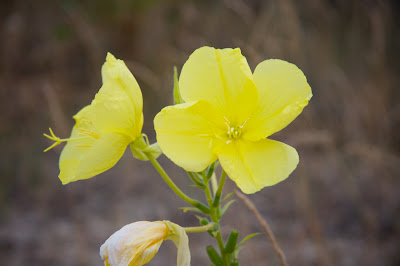 This next image was taken about half way along the path looking back towards the beach. The sun had broken through the cloud a bit and was putting a bit of a pink tinge on the blackening clouds. I was getting a little concerned at this point because we'd left the roof down on the car and it did look as if it could start to rain. 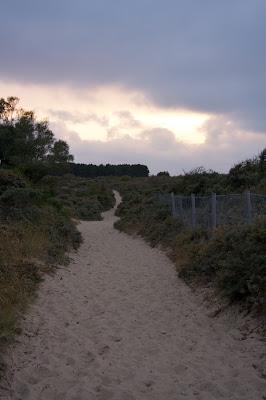 A bit further along and path disappears into the bushes. It didn't rain and when we reached the last bench (there was actually 10 altogether) we could see the car (so it hadn't been very far along the path at all). We went back to the hotel, had a big drink and then collapsed into bed. We'd been awake almost 20 hours, driven hundreds of miles and walked quite a few more, but we were on holiday and it was great. 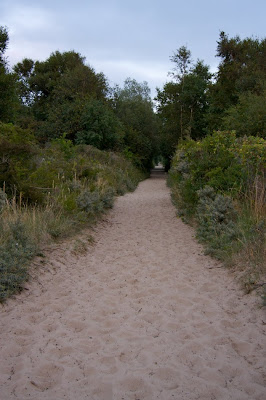 Fab pics Colin. Sounds like an eventful 1st day. Looking forward to seeing/reading about the rest of the holiday!