Now that the leaves have just about gone from the trees and we are in the depths of Autumn it's time to start feeding the birds in the garden again.  I have a feeder which sits empty in the tree most of the year so I brought it in and gave it a thorough clean before filling it and taking it back outside.  This week I've also bought a big tub of "Fruity Energy Balls" to hang about the place as well.  There are two trees in my front garden where I can take shots of the birds from the bay window inside my lounge.  Most of the photos are taken through the double glazing which plays havoc with the contrast and means that I have to spend time post processing to get the contrast back.  Also, apart from the first image, the weather has been pretty overcast so I've had to use a high ISO setting to get the shutter speed low enough for reasonably sharp images.  The smaller birds especially tend to move around pretty fast so I have a high percentage of rejected shots because of motion blur of the subject.

The first shot was taken over a week ago when there was still a few leaves on the trees and the weather was quite sunny for a change.  I had only filled the bird feeder about 5 minutes before this Great Tit was straight in to get its fill.  For some reason they seem to throw most of the seed on the floor and then just pick out the bits they want.  This bird had sorted itself out one of the dark coloured long seeds and was just about to fly off with it. 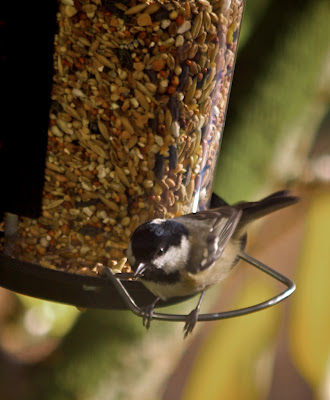 This next shot was a little brown bird (LBB) which was sat in the hawthorn tree away from the feeder and it's taken me a while to figure out what it is.  Using the RSPB bird identifier I narrowed down to one of a few female birds or possibly a Twite.  Although on this shot it's difficult to see but the beak was too long for it to be a Twite and anyway they are quite rare so unlikely to be in my garden.  Finally I think I've found a positive match and I'm almost sure that it's a juvenile Robin. 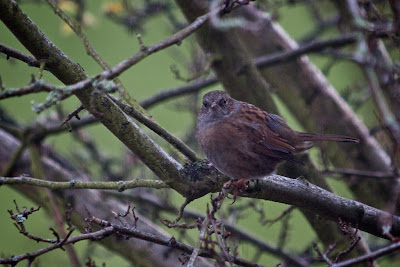 My next visitor was a Jay.  It was quite a big bird in comparison to the Great Tit and the juvenile Robin.  I think the Jay are too big to use the bird feeder because the perch it too small.  However, it seemed quite interested in the fruity ball in the yellow net but it didn't seem that sure what to do with it. 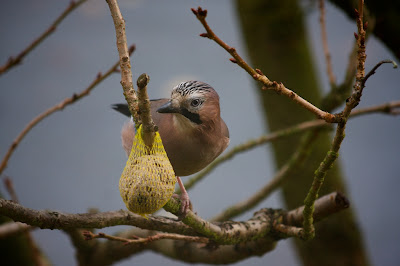 The Blackbird also came to sit in the Hawthorn tree where the young Robin had been.  I think they are also too big for the bird feeder and usually they drop down to pick up the seeds that the Tits throw onto the ground. 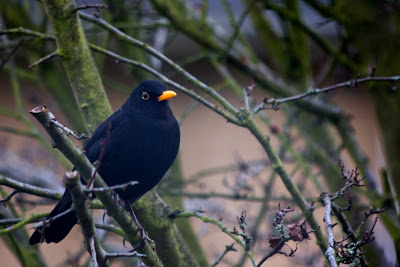 The next visitor was a tiny Blue Tit which was gingerly making its way down the branch to the re fruity ball.  When it reached the ball it just pecked away at the top of the ball as it stood on the branch. 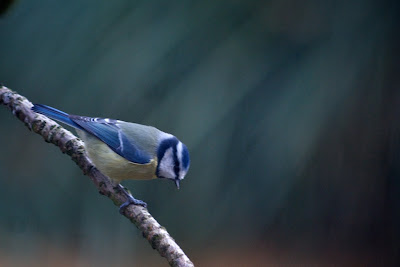 The Great Tit came back (probably wasn't the same one) and went to the red fruity ball where it swung around underneath for a while before it climbed up for this shot.  Unfortunately the shots where it was swiging aroud underneath came out too blurred to post. 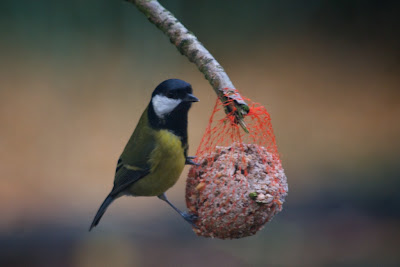 The Jay came back and this time he seemed to know what the fruity balls were all about.  Maybe it was a different Jay or maybe he'd been watching the Tits pecking away at the balls for food. 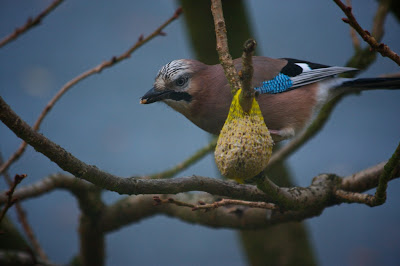 My final visitor was an adult Robin, maybe it was a parent of the juvenile one from the first shot.  Knowing that Robins are quite fearless I opened the window so I could get some shots without the double glazing in the way and it makes a big difference to the quality of the images.  After the Robin had gone I tried to get some of the other birds again with the window open but they all flew off before I got a shot.  Oh well, maybe next time, but here's three shots of the Robin, the first neer the yellow ball and the other two in different parts of the tree. 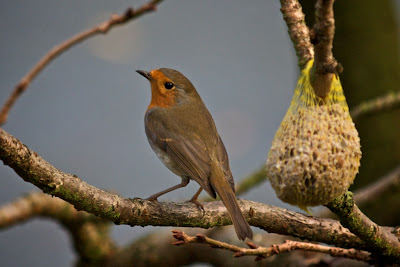 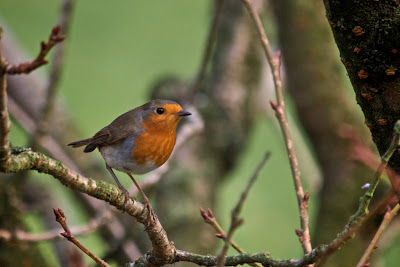 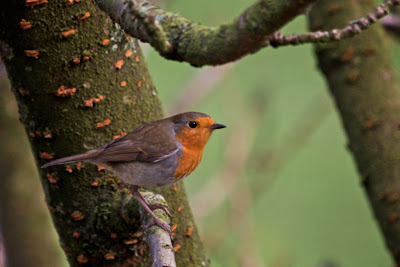 Hopefully over the next few weeks the sun will come out during the weekend so I might be able to get some better shots and maybe some different birds.
at November 26, 2009

Oh, the 2nd robin shot is your Xmas card this year! It's gorgeous!