The First Snow of Winter

To be honest there wasn't that much snow by the house but for a little while it was coming down quite hard and the sky looked quite full of it.  I had arranged to drive over to my daughters' house in Mossley this morning (Saturday) to go Christmas shopping in Manchester which is at the other side of the Pennines.  I was a bit concerned that the road over the top might be blocked as there had been reports that Woodhead Pass, which crosses the Pennines a few miles further South, had been impassable earlier in the morning.  Anyway I thought I'd fire a few shots off of the snow before I set off.

Firstly a couple of the back garden.  The first one out of the study window. 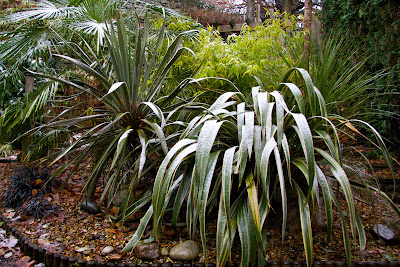 And the second one from the kitchen door which was a little later and the white streaks of snow falling is visible. 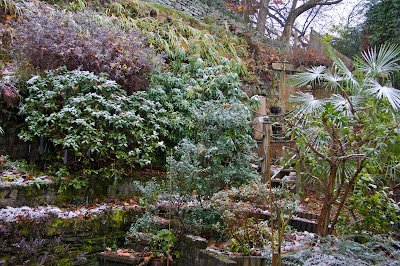 My car on the drive with a thin layer of snow that I'll need to brush off before I set off. 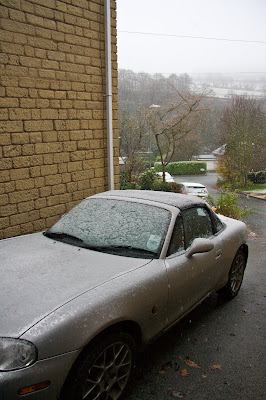 Down the road there's no sign of the snow settling on the road but the sky looks full of snow.  In the photo it looks as if the horizon is just beyond the trees but in reality there is a hillside hidden behind which would go right to the top of the frame. 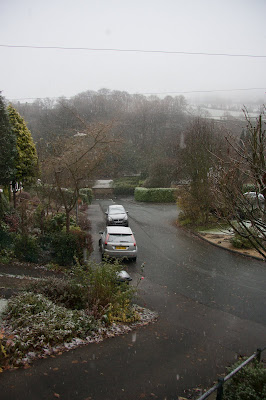 There was another LBB (little brown bird) on the feeder.  I guess it is probably a female or juvenile tit but maybe not. 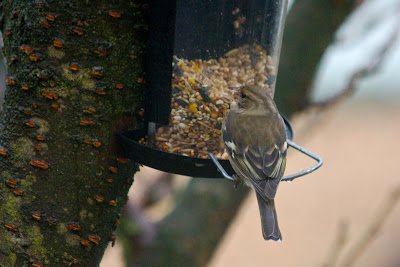 I'm fairly sure this is a great tit (but it could be a coal tit) which was high up on the tree away from the feeder. 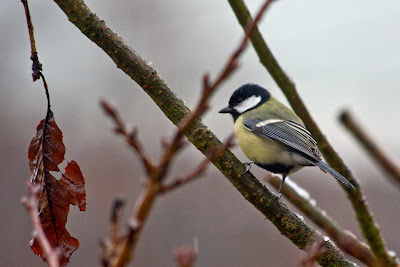 Just caught it as it flew off, the next image on my camera was an empty branch.  They go pretty fast. 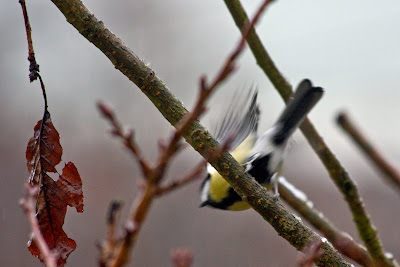 Shortly after taking the photos I set off over the Pennines where the snow and wind were making driving conditions a bit hazzardous.  On the very top it was also a bit foggy (or low cloud really) and there was a coating of snow on the road.  The peat bogs at either side of the road looked to a good layer of snow settled on them which was still there when we drove back in the late afternoon.  At the Manchester side of the Pennines there was no snow at all and while we were on the train from Mossley to Manchester there were even patches of blue sky.  Strange weather.
at December 01, 2009