It's taken nearly a week to get these photos posted, I really don't know where time goes.  Anyhow, last Saturday morning I was determined to try to make some sunrise photos so I got up before dawn and looked out at the weather.  It had been raining quite recently and there looked to be some dark rain clouds in the sky but there looked to be a clear piece of sky where the sun was due to come up.  I got all my stuff together and headed for the door where I found it was raining quite hard all of a sudden.  I decided it would pass and headed toward the sunrise.

As I drove along I could see the sun was rising in the distance but the rain seemed to be following me.  Then I had an idea, I have been thinking for a while that it might be good to put the camera on the car dashboard while driving in the dark and take some shots of the lights as I drove along.  So I stopped the car and got my camera set up on the dashboard.  I set the lens to manual focus and tried to get it close to focusing on infinity as I thought that would give me the best chance to get some nice images.  I set the aperture speed to ten seconds because I felt this would be long enough to get some good movement then I set the aperture to f11 to give a reasonable depth of field.  This first photo is one I took before I set off of a couple of cars going past me and I thought that the exposure was about right for the amount of light around.

I took the next few images as I drove up and down the road using my remote trigger so that I could concentrate on driving.  I tried to time them for when I was going under street light or when other vehicles were coming towards me.  I took maybe 20 shots and selected the following ones as suitable for illustrating the idea.  I quite like the results but I need to find something to lift the camera lens above the window wipers to get rid of them out of the image on my next attempt. 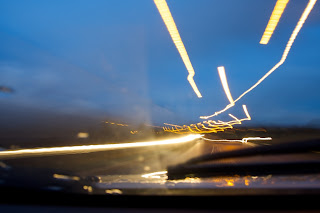 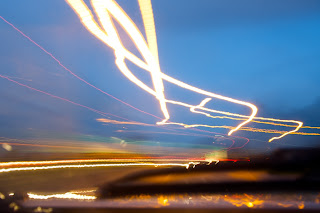 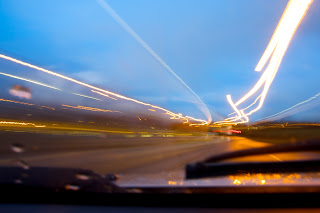 I was on a country road here without much traffic about but I'd like to try taking some on a busy motorway on my way to or from work perhaps.  A bit later the rain stopped and I managed to take some more sunrise shots and I will post them tomorrow sometime I think.