Continuing the review of the holiday photos in HDR Tone mapping, we went to Chateau Brissac to see the European Hot Air Balloon Championships.  When we arrived the sun was on the left hand side as we look at it and the conversion to HDR has really brought out the detail on the side facing us in this image.  There was some scaffolding around the corner which is hidden in this shot. 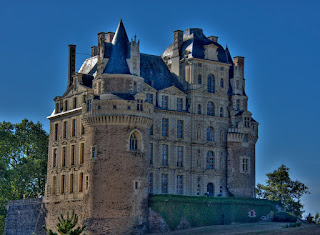 While we at Les Fourneaux we went for a walk and saw this love farmhouse with a bit of a moat around it.  I had included this image in the original blog posting but I love the way that the new version has brought out the colours in a beautiful way. 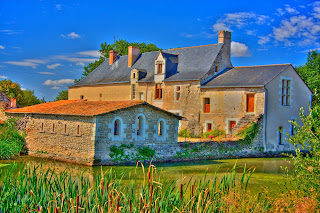 The next image is another one from the Petite Andelys which was lovely ivy covered house next to the river Seine. 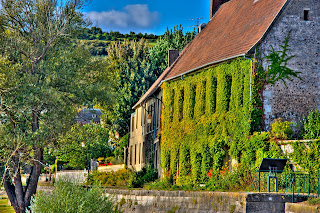 There was an island in the middle of the river with this large house.  This was one of the photos which I knew at the time would need to be a HDR conversion and I took the three bracketed exposures  which I used to make this image. 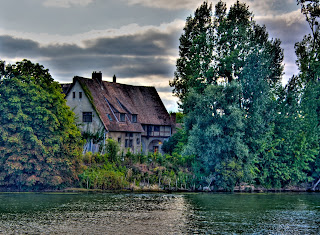 Another image from Petite Andelys of the view down the Seine showing the white store cliffs and the dome of the refuge next to the hospital.

When we went up to the chateau there was a slightly different view of the previous image. 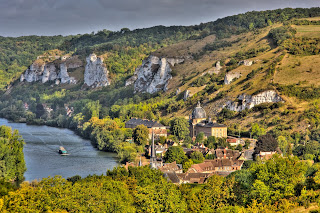 The central part of the chateau at Les Andelys is the only part that you have to pay for entrance.  It's worth the nominal fee to see the information about the history of the chateau.  They have tried very hard to make it interesting and gratefully it has an English version even though none of the staff appeared to understand what I was saying.  Perhaps it's my Yorkshire accent! 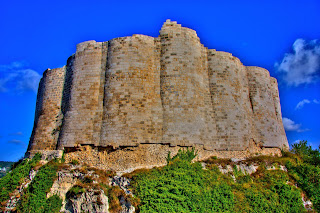 While the market at Arras was underway we sat outside a cafe drinking a bottle of wine when I took the lat two photos.  The conversion to HDR has brought out the colours of stalls and the people visitting the the market. 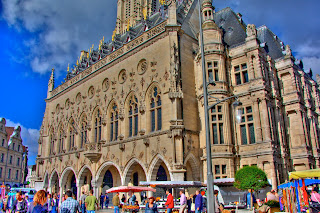 The chairs in the photograph make a great foreground for this last photo. 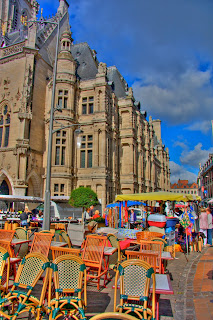 Next time maybe some new photos and perhaps I'll be sober.  Sorry about the text in this post but I've had far too much to drink tonight.  My sister an brother in law are here from Spain are are forcing large quantities of single malt scotch down my throat. Not that I need a lot of encouragement as I'm on holiday from work this week.