It's that fungi time of year and any walk through the woods or any other dark, damp places will find some kind of mushroom.  As with my previous fungi post the challenge is to find enough light to get a decent shot or ramp the ISO on the camera as far as you can without getting a lot of noise.
This first image was taken near Bretton in a pile of big old logs piled up at the side of the path.  The logs have obviously been here a while with the part of the image on the right showing a lot of woodworm holes.  These two little yellow mushrooms were tucked in between the logs and are quite colourful.  There were some other mushrooms of a different kind up on the top of a pile of logs but it was too dangerous to climb up and photograph them.  We also saw some other big mushrooms out in the field and although the light was a lot better the mushrooms were in a very sorry state. 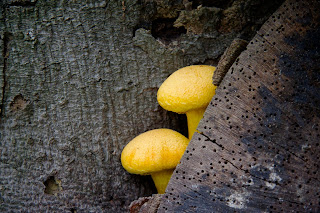 The rest of the shots in this post were taken in Beaumont Park near Huddersfield.  This first one was on its own at the entrance to some caves.  I had to remove a layer of old leaves from around it so I could get a clear shot.  I decided to covert it to black and white (using the blue filter setting) because I felt it brought the contrast up nicely and there wasn't much colour to be seen anyway. 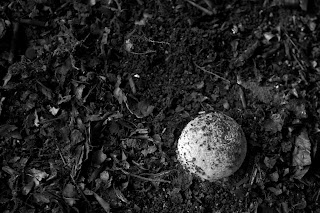 These next mushrooms were growing on an old log floating in a swampy looking pond.  I couldn't get very close to them so this was the best shot I could take.  The green dotty weed on the top of the water was very bright green and I thought it really detracted from the main subject of the mushrooms so I selectively desaturated the green and yellow so that the mushrooms came forward a bit. 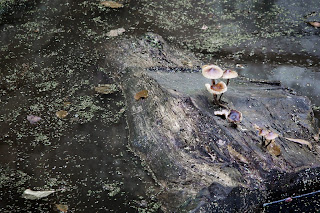 This next mushroom must have been six to eight inches across and I think the weight of the top must have made it fall over.  This one was just in a patch of sunlight and you may be able to make out another
one fallen over in the darkness of the background. 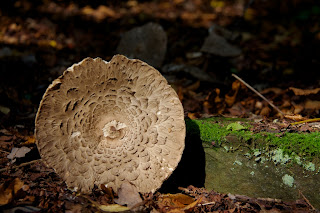 Just under one tree there were several patched of this strange spiky mushroom.  Some of the patches were old and had started to decay but the others were quite fresh and bright. 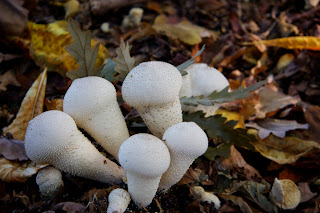 In the last photo I converted to monochrome with a hint of brown as a comparison to the previous photo.   I'm not sure which version I prefer.  I think the colour in the leaves are a bit of a distraction in the first version but maybe the second one is too plain.  Now I'm looking at the second photo again I'm feeling the leaf on the left in the foreground is a big distraction so I might have a go at cloning it out or darkening it drastically towards the corner. 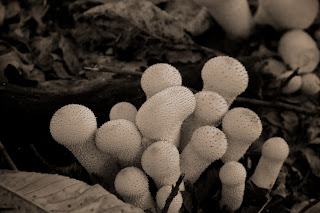 I realise that I still haven't posted any of the other photos from my previous visit to Beaumont Park and I have lots of photos from France still to process.   I think I might need to try and post more regularly to catch up a bit.  The thing is I've been considering starting a new blog about getting started with digital photography, very much a beginners guide.  I've only had a decent camera for about three years so I don't consider myself an expert but I might be able to help some people who are at the same stage that I was three years ago.  I guess I need to think it out a bit more first but I'll post some links if I ever get it up and running.
at October 14, 2010