It's been a great weekend for the weather so I decided to grab some photos of the spring flowers.  On Saturday we went to a local park for a walk and this first photo is a lonely two coloured daffodil with quite an unusual flower.  We were in a wooded part of the park an it was a bit in the shade so the picture has come out a bit dark. 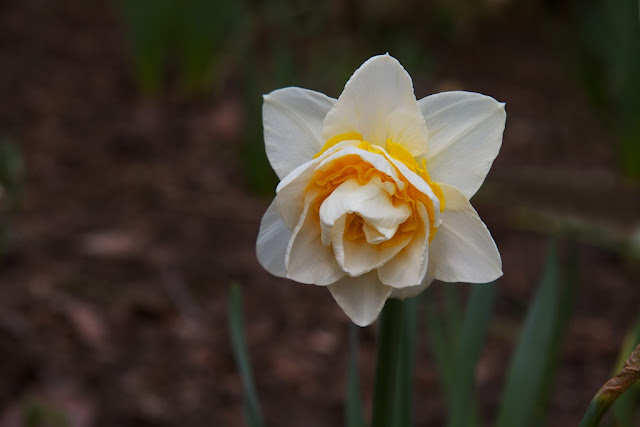 A little further along there was a few more of the same type of daffodil and this time they were basking in the sunshine. 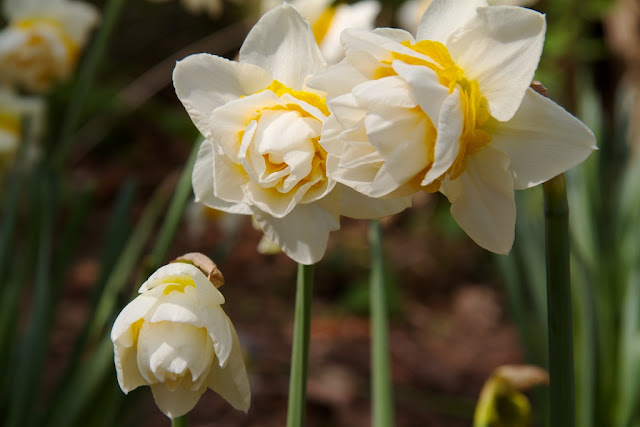 Quite close by were some more unusual daffodils with very spikey flowers.  There were much smaller than the first type and were getting a bit past their best so it was hard to find any decent looking specimens. 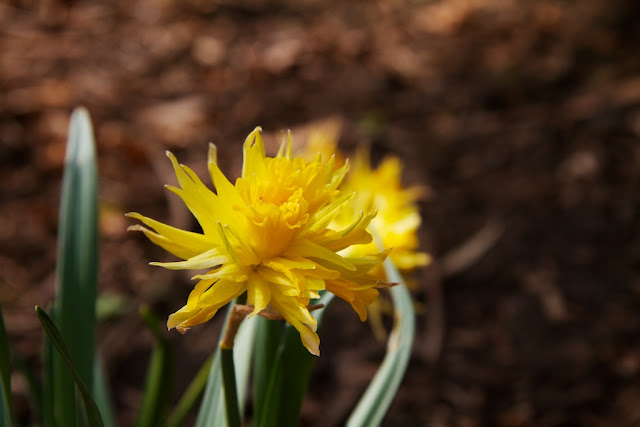 Towards the centre of the park there were some of the more traditional type of daffodils and I contrasted these ones with some white flowers in the background. 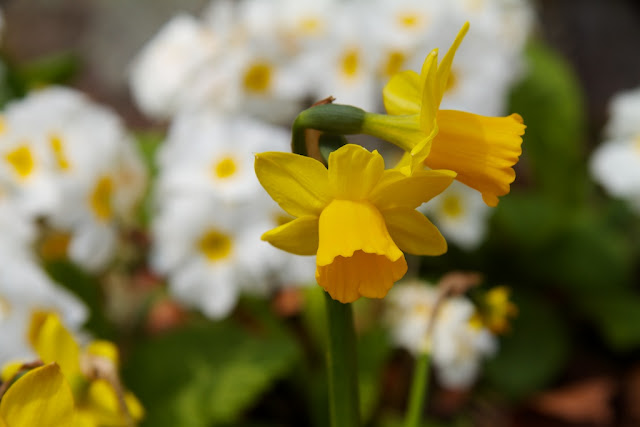 I had actually wanted to find some bluebells to photograph as the news had been going on about how they were all out two weeks early because of the warm weather.  So we headed back into the wooded area but none of the bluebells had started to flower yet.  I guess the news people must have been further South.  However we did se a few small clumps of these blue flowers which look as though they must be related to bluebells but have very tightly paced flower heads. 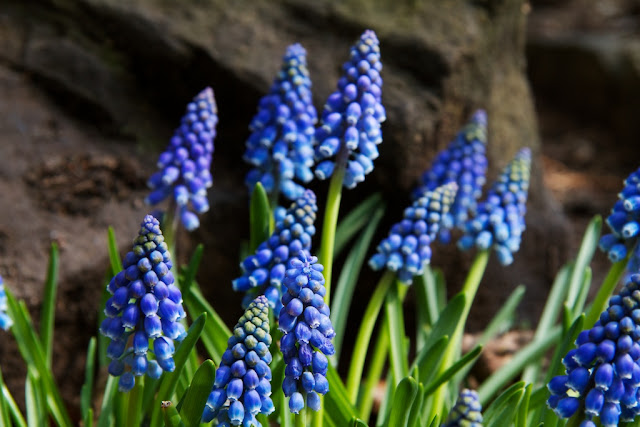 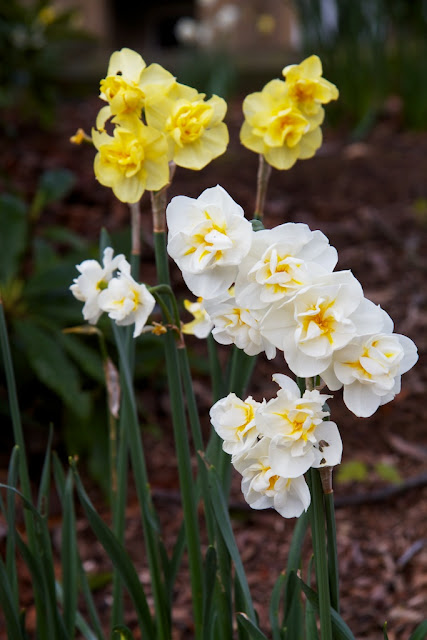 The next type of daffodils were very small and also had multiple heads on each stalk. 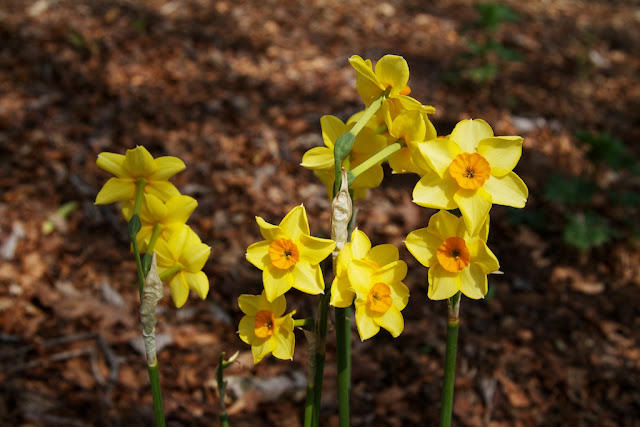 Finally for the daffodils back to the more common yellow ones, although the trumpets on these look a bit more fancy than the ones we'd seen earlier so maybe these were special ones too. 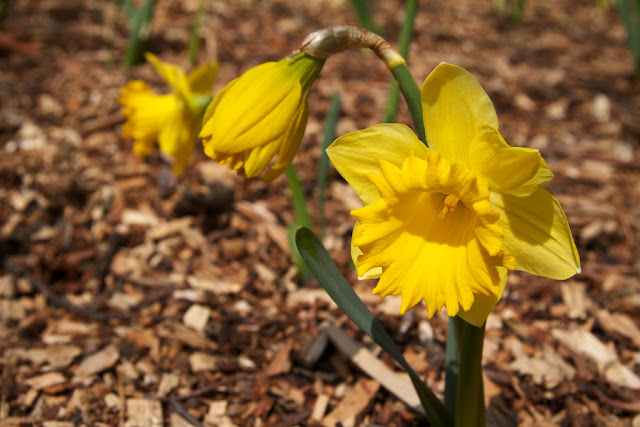 Near the entrance to the park was a couple of beds with a lovely mixture of yellow, white and orange blooms. 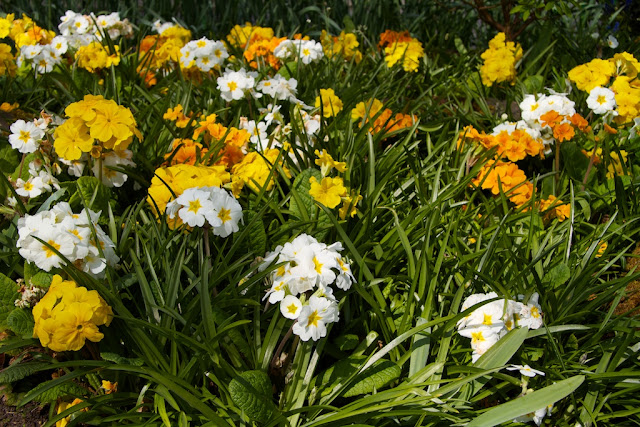 I took quite a few close ups of the flowers in the beds and I think this was the best one. 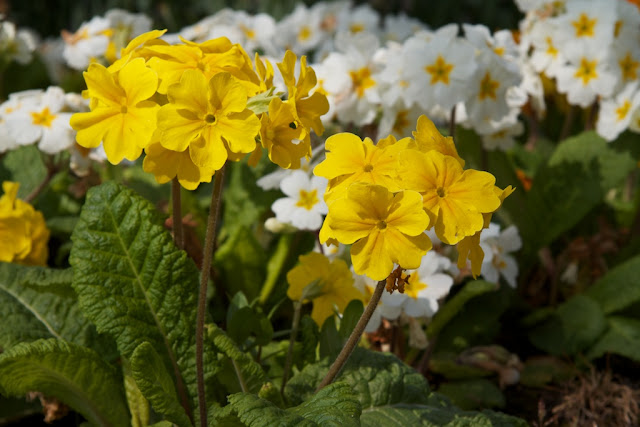 On Sunday morning I got up early to take my daughters dog for a long walk and on the way back I went through the woods close to our house.  Here I found the bluebells that I hadn't found in the woods next to the park.  There was still a load more that hadn't started to flower yet but there were certainly a good number already out.  The first ones I saw were a bit sparse so I got some close ups of these. 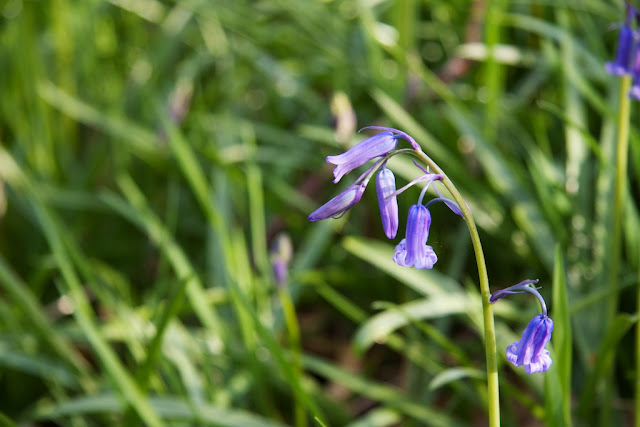 A little further along the path there was more of a carpet of the bluebells in a patch of sunlight between the trees. 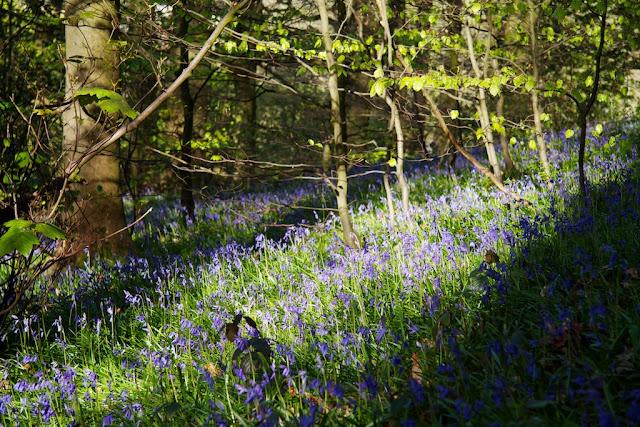 Again I tried for some close up shots and this time there are more bluebell flowers in the background.  I was being very careful not to stand on the bluebells as they had been saying on the news that they are very tender and can be easily damaged. 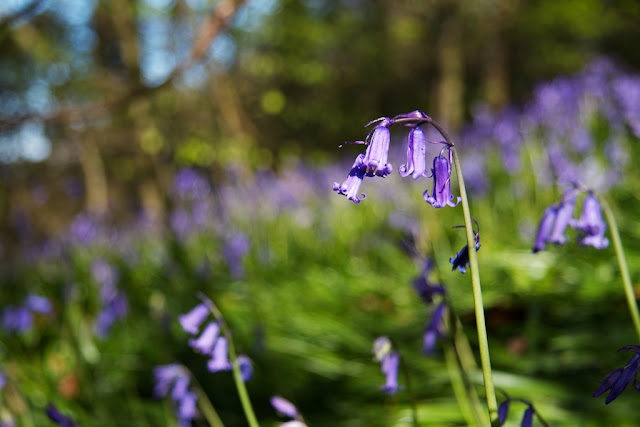 Another patch of bluebells were enjoying the early morning sunshine.  I will check back next week to see how many bluebells are out over the Easter weekend.  The weather forecast is for some sunshine and warm weather this week so there should be a lot more to see. 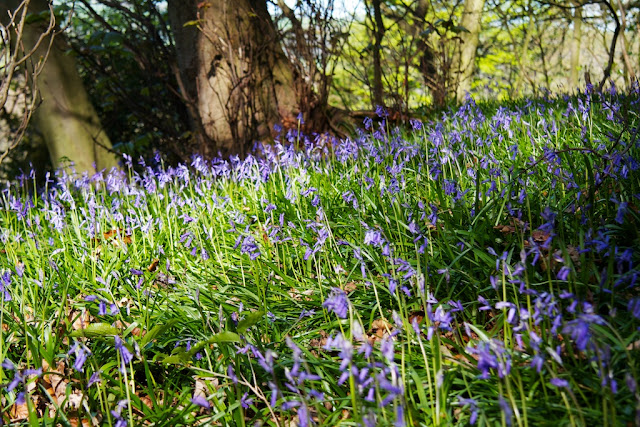 When I got back home I thought I'd take some photos of the few flowers in our garden before I went in for breakfast.  There were some nice pinkish red flowers in the front garden ... 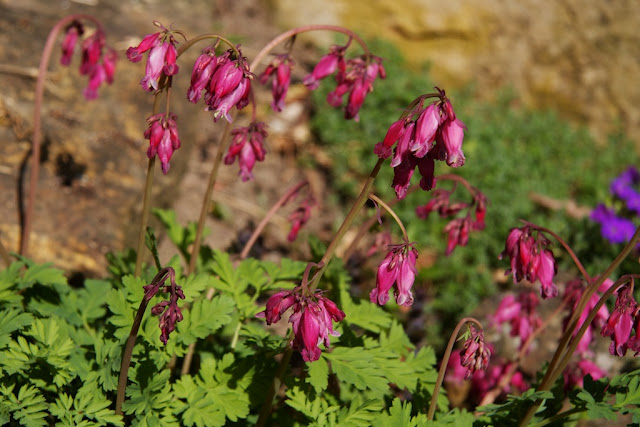 ... and next to them some lovely purple alpines growing over the rocks.  It looked a bit odd because the part of this plant that was in the ground had't started to flower yet.  I wonder if the rocks retain more heat and allow the plants to thrive better? 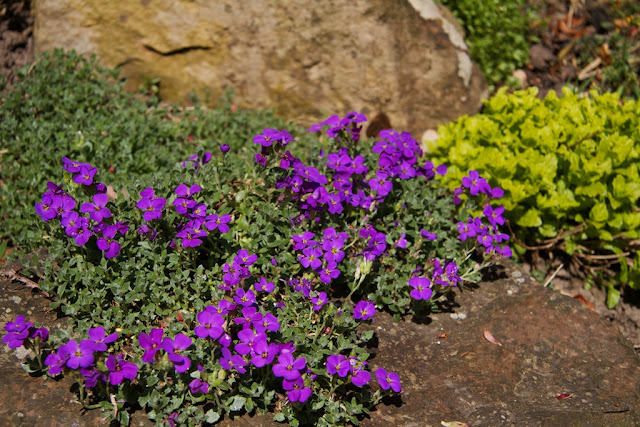 Also in the front garden the cherry tree had finally started to blossom.  The cherry trees in a neighbours garden had flowered weeks ago and all their flowers had gone. 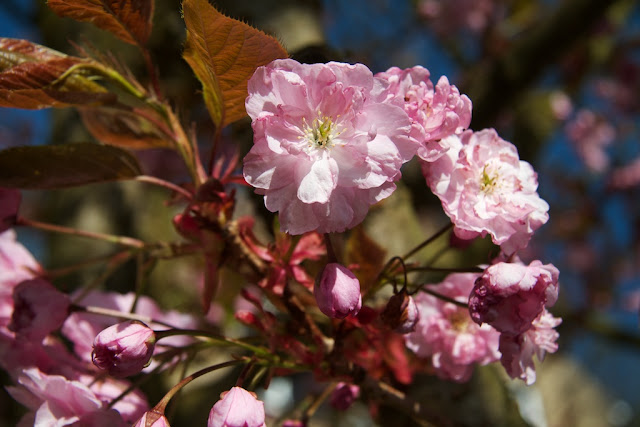 In the back garden we have this bush with lots of little white flowers that smell very sweet as you walk past them. 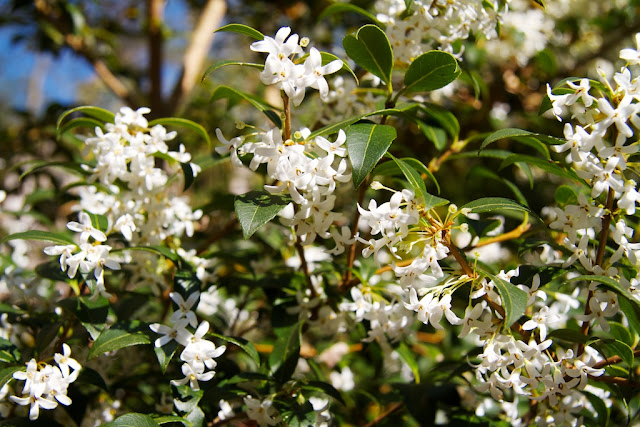 And the last photo is the flaming pieris which isn't a flower but is quite colourful all the same. 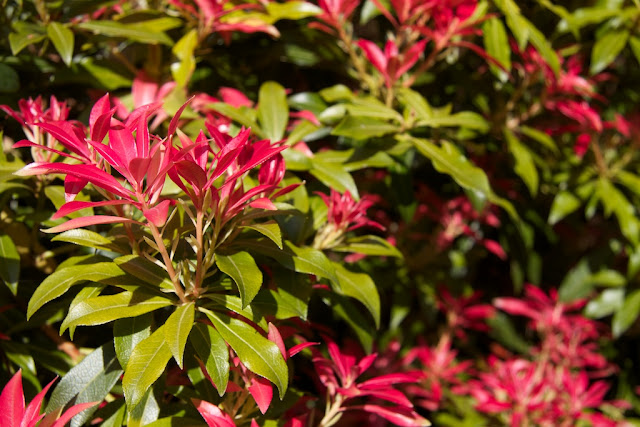 I took a few other photos while out and about so I might put some in a post a bit later in the week.  Looking forward to the Easter holiday, with the Royal wedding and the bank holidays I've just had to use 3 days of annual leave to get 11 days away from work.  I have quite a few jobs around the house and garden to do but hopefully I should get plenty of time to take lots more photos.
at April 18, 2011