It's been a very busy Easter holiday so far.  With the weather being so great we've been doing lots of work in the garden but on Saturday afternoon we decided to have a bit of a break.  Lynne remembered hearing something on Pennine Radio about giant heads at Bretton Park so we thought we'd go and have a look.  Over the last few years they have loads of work at the park to make it more accessible including a massive amount of parking and a new visitors centre.  I've made a few trips here with the dog on early morning photo trips but we've not been together for a while.  Some parts of the park aren't open to dogs so there are areas that I haven't seen recently too.

When we arrived at after 3pm the car parks were full and we had to park on the grass near the entrance.  We walked down the hill from the car towards the lake and on the way saw the incredible tree.  The yellowy green leaves against the blue sky looked amazing. 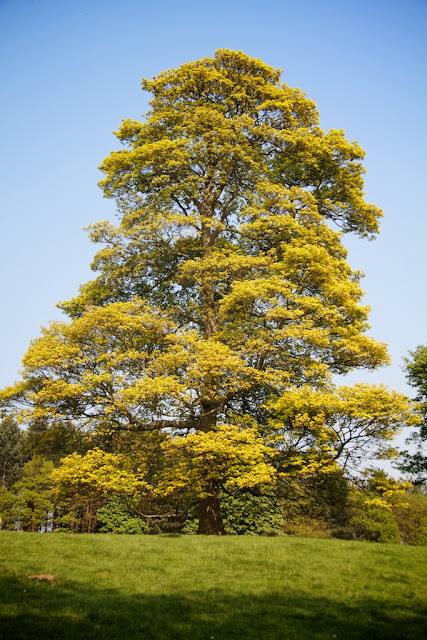 Just a little way further down the hill, tucked away behind the trees was Bretton Chapel.  I've been coming to this park for years and years and I've never stumbled upon this building before.  I did suggest to Lynne that they must have just put it here but the notice board outside the gate to the chapel said it had been here for nearly 300 years so I guess I was wrong. 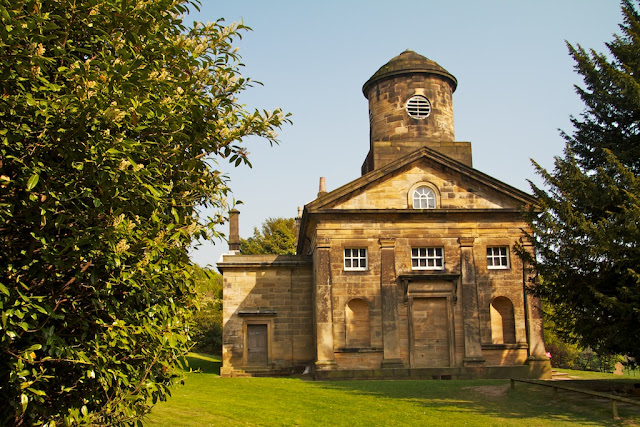 We decided not to go around the lake because it was getting late and we hadn't found the giant heads yet.  We walked along the near side of the lake and noticed they had thinned down the trees considerably so now it's possible to see more of the lake and the islands within the lake.  Next we went to the Orangery where they have a good display of Camellias including these next two photos. 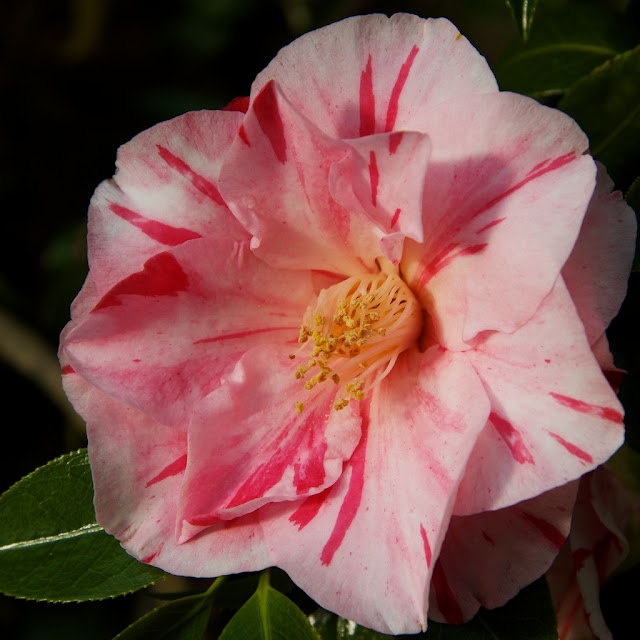 I think I like the red one the best.  There were also some very nice white ones but none of them were in a good place to photograph and most of them had lost a lot of their petals. 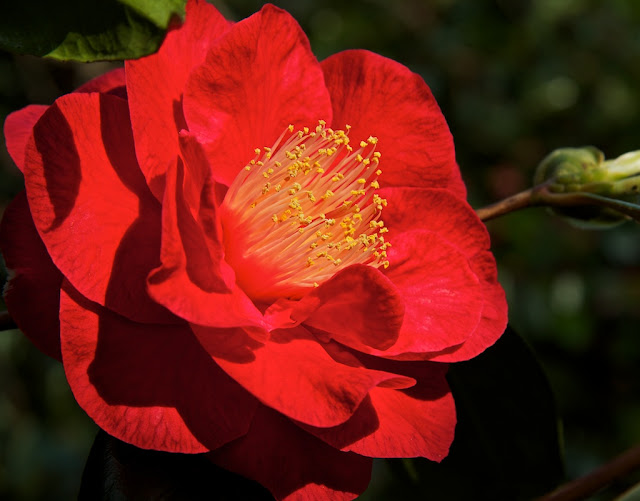 After the Camellia House we had an ice cream from the stand outside the cafe.  The young girl serving there said "You're the last I'm serving today".  Apparently she was supposed to close at 4pm but it was after 4:30pm and she was almost out of of ice cream, only 3 flavours left.

We finally found the entrance to the area around the underground gallery and this is where we found the Jaume Plensa sculptures.  There was a display of three of these metal sculptures made of letters and chinese symbols.  These three were just a little bigger than life size but in the background you can see a very big one. 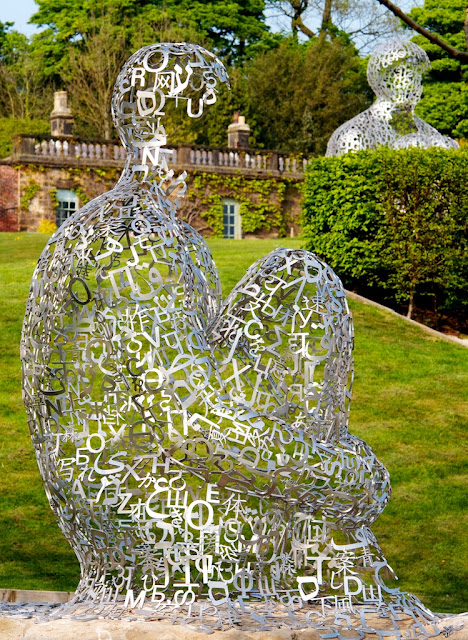 On top of the gallery roof were the big heads that Lynne had heard about on the radio.  They were made of what appeared to be a single piece of wire mesh in a head shape with the featured moulded into them. They must have been 10 to 15 feet high and were very impressive.  They weren't letting anyone into the gallery because it was getting close to to closing time so we couldn't see any of the work inside.  We'll have to come again a bit earlier in the day before the exhibition ends in September. 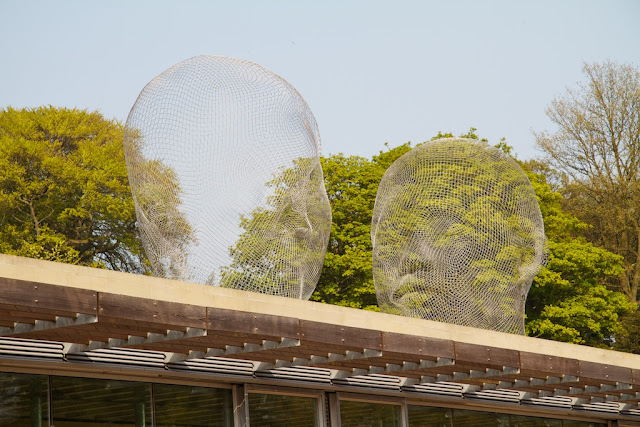 On the lawn in front of the gallery there were more sculptures sat hugging the trees.  There must have been eight of ten of these on the grass with people sat around them.  The letters on these ones were spelling the names of composers. 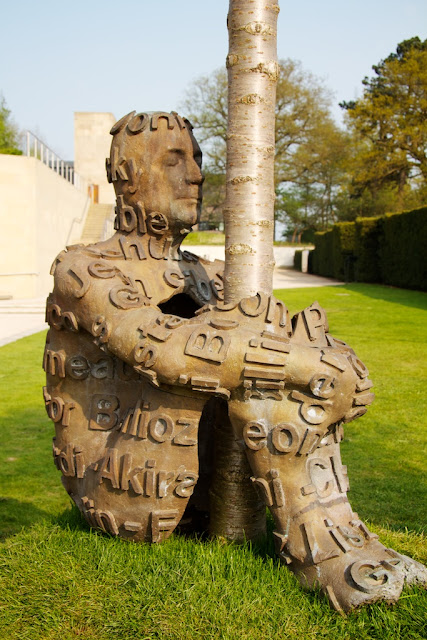 We walked across the front of the gallery and at the other end there is a path around the back of the gallery which takes you up the hill to where the big sculpture was.  As you can see it was possible to go inside and actually sit on ledges at the side. 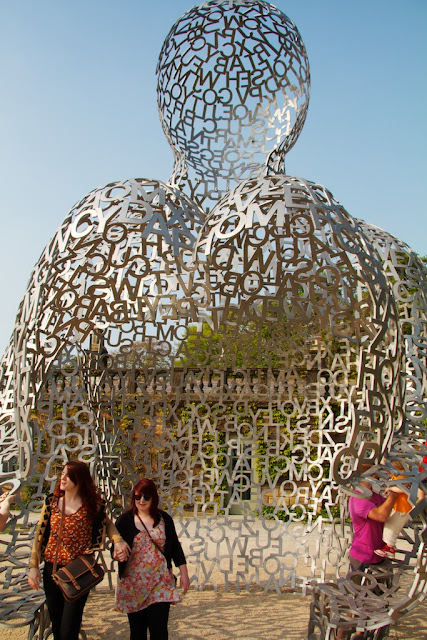 From here you could look down the hill to the gallery roof and the big heads.  They look quite surreal with the trees and the rolling landscape in the background.  It was a bit hazy so the landscape doesn't show to well in this photo. 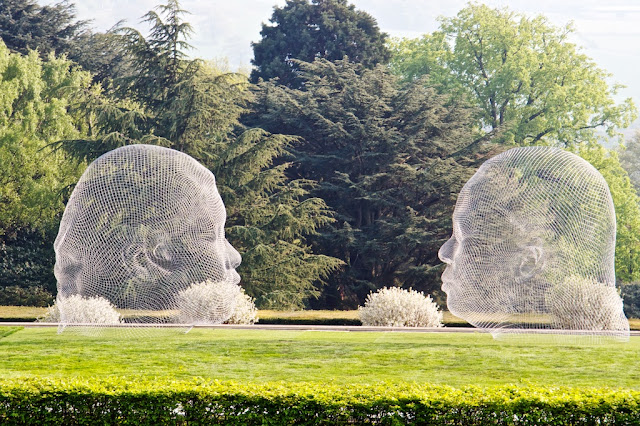 I took a few photos of the big sculpture at different angles and I think this one came out the best. 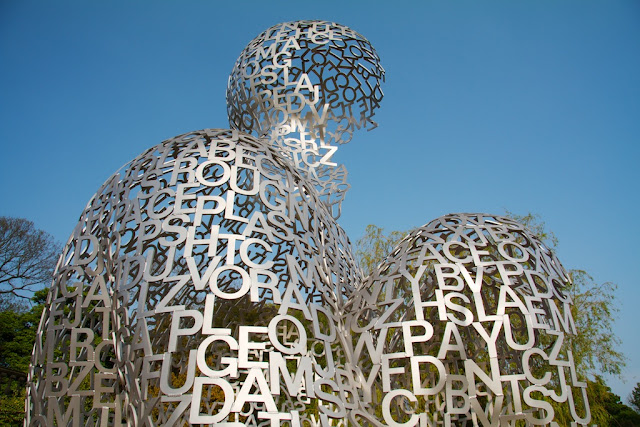 The path continues back down to the other end of the gallery where we first entered the area.  There were a few more of the smaller metal sculpture but these ones were kneeling rather than sitting.  In this photo I got the big sculpture in the background again.  A pity about the guy in the pink shirt, I had considered cloning him out but in the end I decided it would be too much trouble.  Maybe I ought to change the colour of his shirt to something a bit more subdued so it doesn't distract as much from the sculptures and trees. 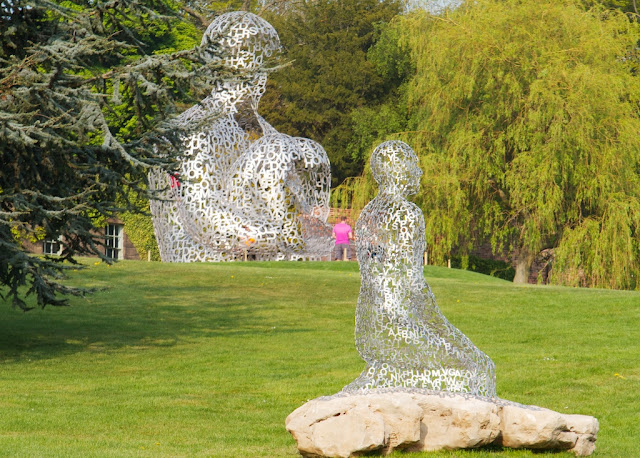 By now it was getting quite late and the park closes at 6pm so we made our way out and went home.  If your in the area it's definitely worth a visit to see the heads.  If you are not in the area it's worth a trip to see the whole park, there's lots of other sculptures by other artists in the park (including Henry Moore) which are in other posts in my blog.  You could easily spend the whole day here, walking around the park and have a picnic in the grounds or have a meal in the cafe or restaurant.  Admission is free and the car park is just £4 for as long as you like.  In case your interested, full disclosure, I have no connection with Yorkshire Sculpture Park or the Bretton Park estate but here's a link to their site.
at April 25, 2011