I don't often talk about equipment on this blog but I started having problems with one of my lenses not focussing properly.  It's the lens that I use the most and which is on my camera probably over 80% of the time.  It has broken before when the zoom stuck and I blogged about it back in July 2009 and because it was only a few weeks before going on my annual holiday I hurriedly bought another copy. I was used to this lens and I couldn't justify getting a higher quality lens.  About a year later that lens also went the same way as the first which I wasn't too happy about but then I found when I searched the internet that this was a common problem with this particular lens.  I also found a website which showed ho to fix it.  Basically the fault was a screw inside the lens which had come loose and it required taking the whole thing apart and putting it back in.  I was feeling very brave at the time so I followed the instructions, fixed both lenses and took the advice to put a bit of super glue on the screw to stop it coming back out.  Since then I've used one of the fixed lenses and kept the other one as a spare which I am having too use now.  If you're interested the lens is the Canon 17-85 IS USM which Amazon are currently selling at £350, so not a cheap lens.  I think it's an awesome lens when it's working but I'm not happy that it doesn't appear to have a particularly good build quality.  I wouldn't buy another one so if this spare one breaks down too I will have to consider my options.

Anyway I guess you have figured out that this was the lens on my camera when we went to Todmorden to do the packhorse pathway walk.  Starting on the Todmorden to Littleborough road near Walsden we started by crossing the canal and then heading up the steep hill.  The stone on the canal bank says Lancashire on one side and Yorkshire on the other so we were doing a cross-county walk today. 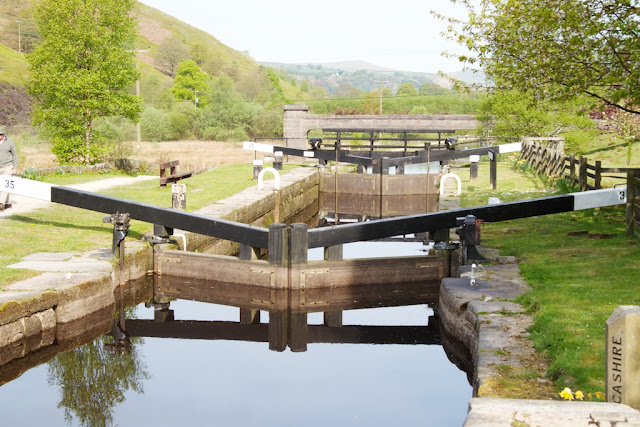 It was a very hot day so the going was quite hard on this stretch of the walk.  As we neared the top there was this little stream running alongside the path. 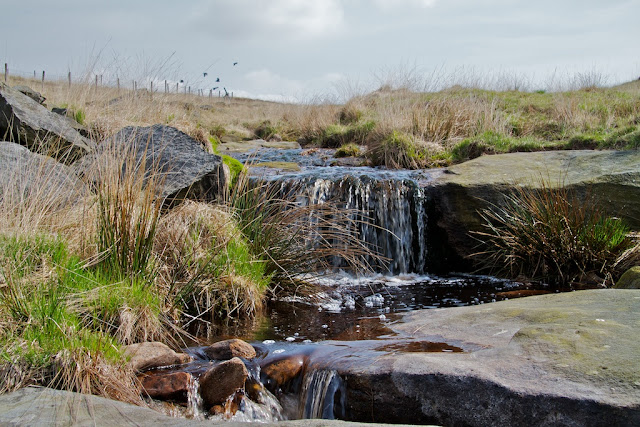 Our destination at the top of the hill was a series of reservoirs and this photo shows what appears to be two long thin reservoirs with a wall across the middle.  In the distance is a long line of electricity pylons stretching along the top of the moors. 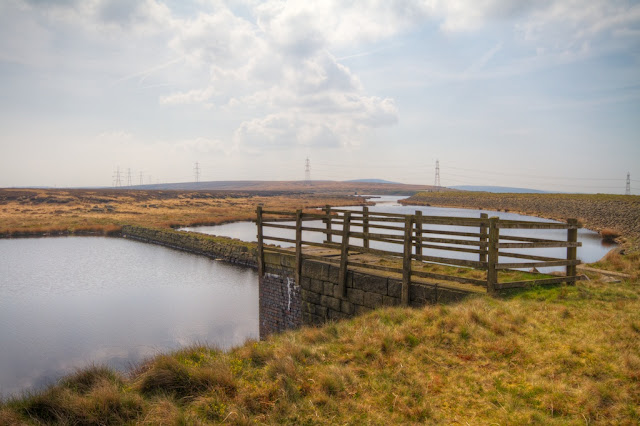 Heading away from the pylons there was another, bigger reservoir (Warlands) which unusually had the control tower towards the middle of the wall.  Normally these towers are in one corner of the reservoir. 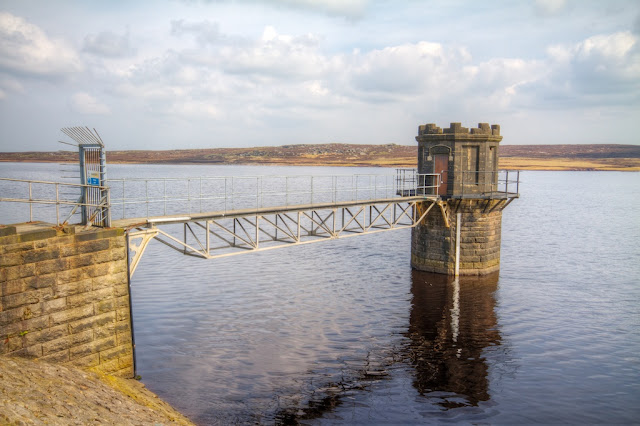 At the far end of the reservoir was what looked like a quarry wall so I wondered if they had used the store from here to build all of the reservoirs in the area.  I made this into a panoramic because the top and bottom of the full image was a bit boring.  At full size you can see that this photo is not very well focussed because my lens was playing up quite badly by now and just got worse as we went along.  Most of the photos after this point were well out of focus when I got them home and the last few I focussed manually so I had something to take home.

Out in the distance there was a big tower on the top of the hill which looked very similar to the one at Pots and Pans near Greenfield.  It was getting quite cloudy now and it was still very warm but there was a bit of a cold breeze at times. 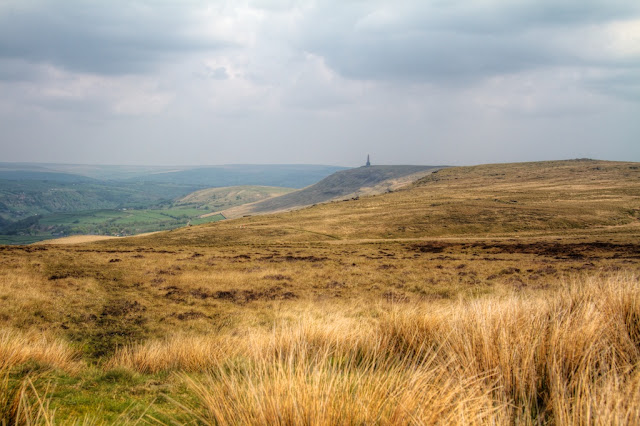 We started walking downhill and reached Gaddings Dam which was quite pretty and at the far end there were some people swimming. 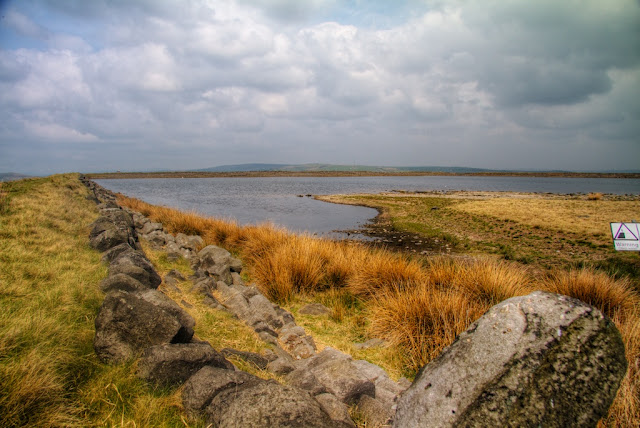 I went down to the waters edge and took this low angle shot across the water.  You might just be able to spot the tower on the horizon that was in the earlier shot. 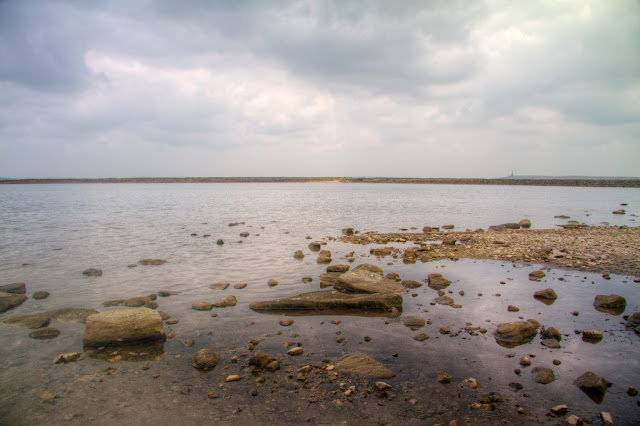 At the far end of Gaddings dam was this wonderful stone staircase which looks to be going up to the sky from this angle. 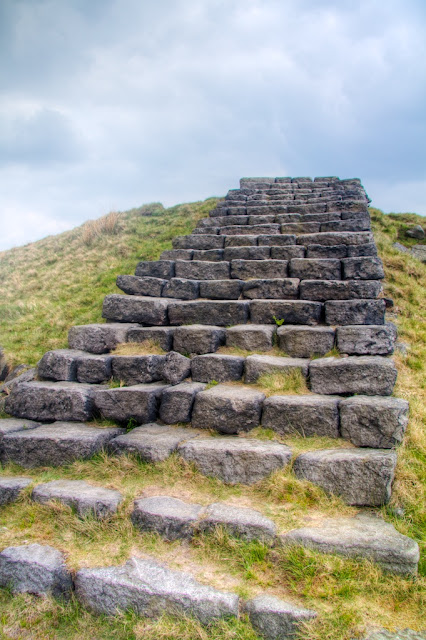 From the dam we started to head back down towards out starting point and on the way we passed this very strange looking rock formation. 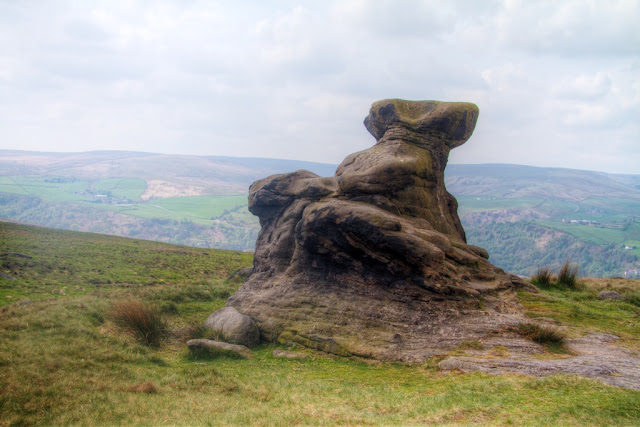 The last stretch of the walk was back along the canal to the lock where we had started.  We had walked around 6 miles and was ready for our lunch and so we headed to a nearby pub. 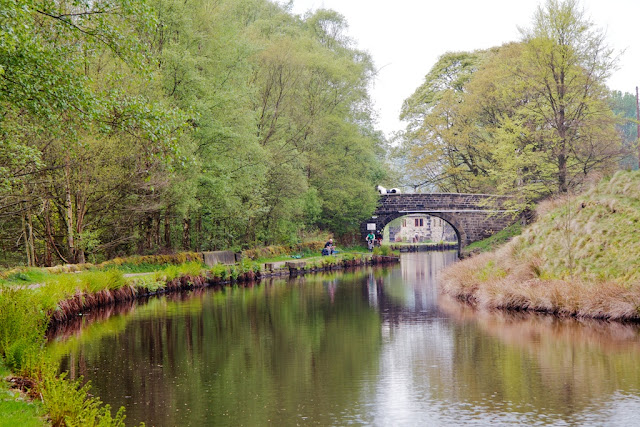 Not much narrative today (apart from the rant about my lens), it's getting late.  Next time another walk about but nearer to home and not as far, and with a lens that focussed properly.
at May 12, 2011

Hi Colin, bit of a sod about your lense. Dan's still enjoying his camera (no lense issues so far!) Here are some he took at the Yorkshire Falconry Centre a couple of weeks ago...

There are a couple of really nice ones in there!