In an attempt to get a bit fitter we've been trying to get out for a few more walks.  Normally I go out on my own or with my daughters dog but my wife has decided to come with me a bit more often.  She bought a pack of cards from the AA called 30 Walks in West Yorkshire from the book club at school and we're going to try to do as many as we can.  The walks are quite varied ranging from 3 to 10 miles and each card has a map on one side and directions on the other, which are quite detailed. The cards also give the distance, minimum time, ratings for gradient and difficulty, a suggested OS map and lots of other useful information.  The cards are made of sturdy card with a plastic coating and a plastic envelope is supplied for carrying the cards on the walks.  The AA have similar cards for many areas of the country and I think they're very good to give some ideas to get out walking.

Most of the walks seem to start and end at or near a pub, which is always a good thing.  The Todmorden walk from the previous post was from one of the cards and so is this one.  Farnley Tyas is about 3 or 4 miles from home and my wife used to live between Almondbury and the village for the first 15 years of her life so it's an area we know reasonably well. The walk is 4.5 miles with a medium gradient and difficulty and expected to take two and a half hours.

We started the walk next to the playing fields and then headed down a track next to the woods, through a field down onto a little road.  After a few yards we left the road on another path into some more woods and this is where we went a bit wrong.  Had we read the instructions we would probably have stayed on the right track but we ended up spending quite a time in the woods instead of taking the correct route through some fields.  Anyhow from the map we were fairly sure where we were so carried on knowing we could pick up the proper route later.

There were lots of bluebells in the woods and the weather was very sunny so there was patches of light coming through the trees.  I took this close up of a bluebell near to the path and got down low so that the bluebells in the light and shade in the background were in the frame. 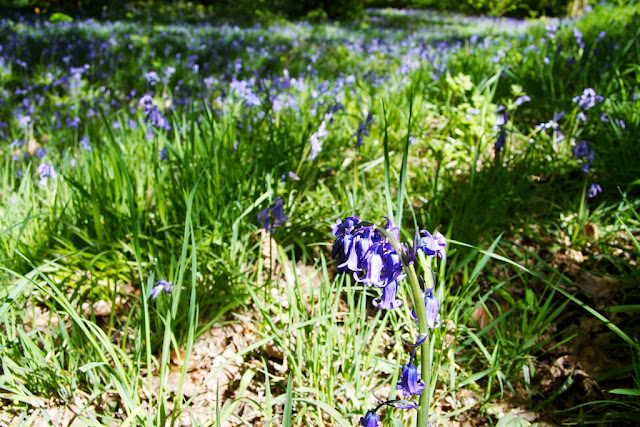 In the middle of the woods we came across this pond that belongs to a local angling club.  It looked like it could have been an old mill pond, I don't know of a mill that was close to here, but there may have been.  Alternatively it could have been an old local reservoir, possibly serving Honley village at the bottom of the hill. The angling club had constructed platforms around the water for the anglers using what appeared to be bits of scaffolding. At one end of the pond was a security camera looking over the water so I wonder if they have problems with poachers.  As we walked around the pond we saw millions of tadpoles and also some very big fish just under the surface of the water. 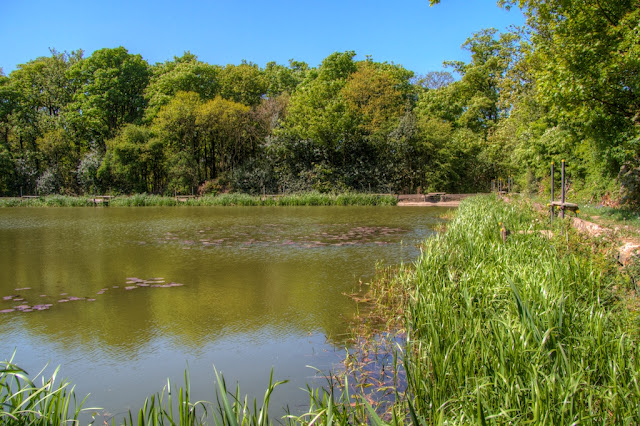 Past the pond the path dropped down to this little stream.  The weather has been dry for ages so there wasn't much water in the stream. 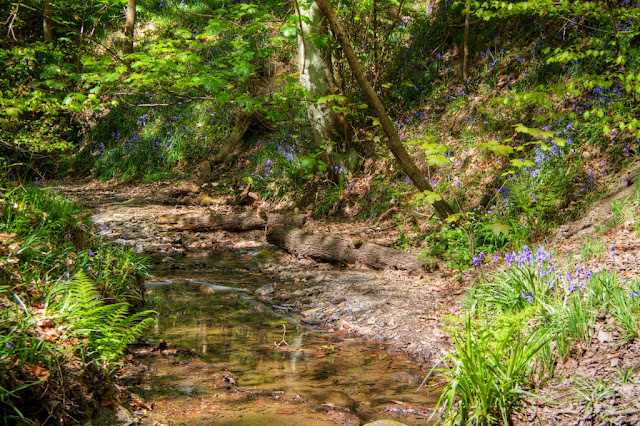 More bluebells all through the woods between these very closely packed trees. 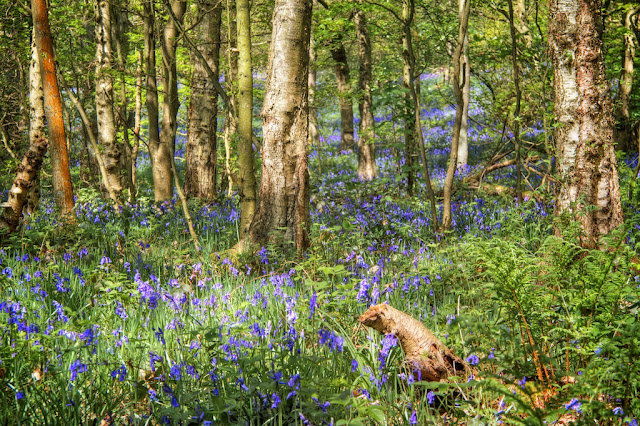 As we climbed up the hill there was a bit of a clearing that looked beautiful with this rich blue carpet. 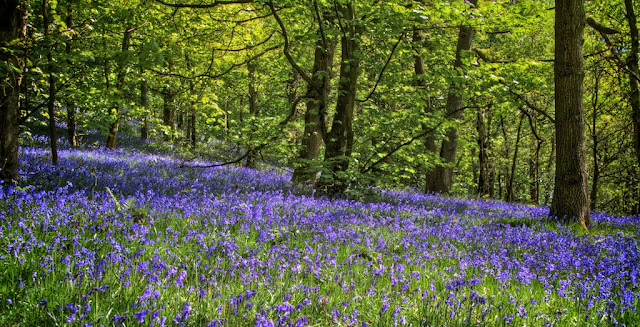 At the top of the hill we came out onto the road between Farnley Tyas and Castle Hill and were a few hundred yards from our intended path.  There was another path which appeared to be going the right direction but we decided to walk along the road and pick up our intended path.  As it happened the other path did join our a little way along but you never can tell sometimes.  From the path we had a nice view of Victoria Tower on Castle Hill looking quite magnificent in the sunshine. 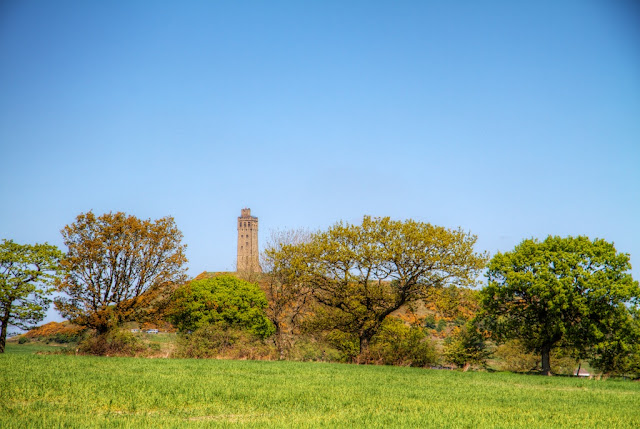 We'd brought a picnic with us and considered making another detour to sit up by the tower to eat our food but we couldn't find a path going in the right direction so we didn't bother.  Further down the path I took this next photo looking across the valley back towards Farnley Tyas.  You might just be able to see the church steeple poking up in from of the trees on the horizon. 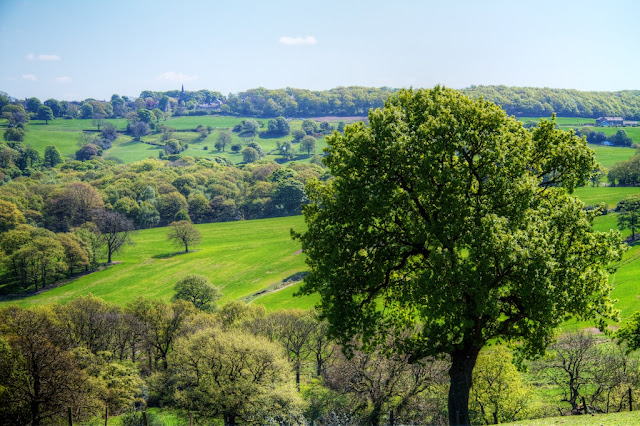 Next to the path was this little bush with white and red flowers which looked very pretty.  I love the way the background is out of focus but you can still make out the trees and the fields going into the distance. Since I exported this photo for the blog I have re-cropped it to square to take out the fence post on the left and the twigs coming in from the right.  I think it's a great improvement because those two bits are quite distracting. 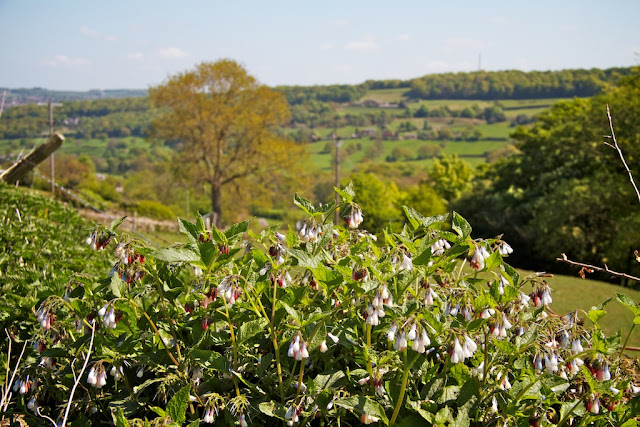 We joined the road for a little while and then started heading downwards through some fields.  At the edge of the field was this amazing looking dead tree.  I took this photo with Victoria Tower in the background because I thought it was a nice contract between the straight lines of the tower and the curly branched of the tree.  I think the photo is too busy though with all the other buildings in the middle ground but I couldn't figure out a way of avoiding them. 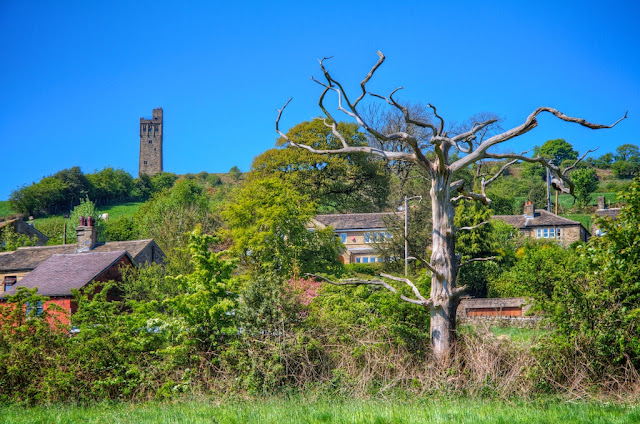 At the bottom of the hill we were back into woods again.  Here we are very close to where my wife spent her childhood.  She always calls these wood Mollica Woods but when we look on the map they are actually called Mollie Carr Woods.  I like this photo because there's a lot of light and shade and again more bluebells going up the hill in the background. 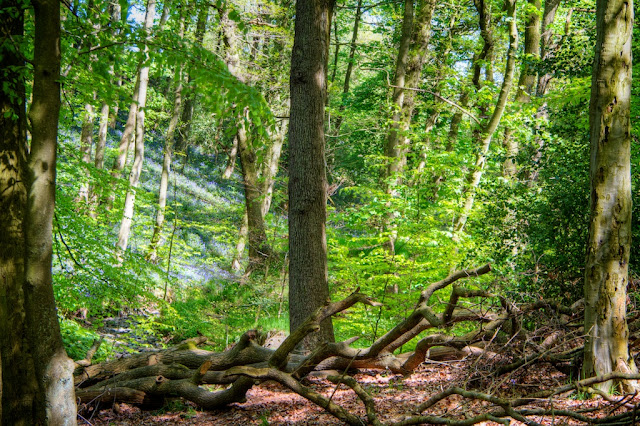 At the edge of the woods we finally had our picnic on a grass bank next to a little stream. I think this all brought back a lot of memories to my wife as she often played here with her brothers and sisters.  She is one of seven children and I think they must have had a lot of happy times here.  Behind where we were sat was a big field with this beautiful tree in the middle. 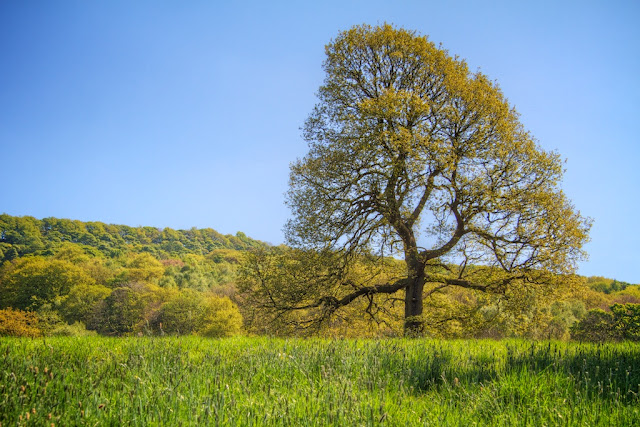 Along the path were these lovely white flowers in the grass. 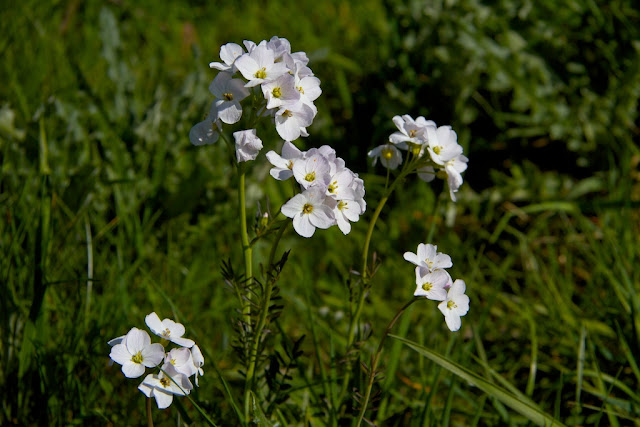 We had few more yards on the road and then started heading up a path back towards Farnley Tyas on the last leg of out walk.  Part way along the path were some houses and a little grassed drive with this green dumper truck.  It just looked interesting to me so I took the photo.  In the background is Castle Hill again and there's a line of smoke rising up from the bank in front of the tower. 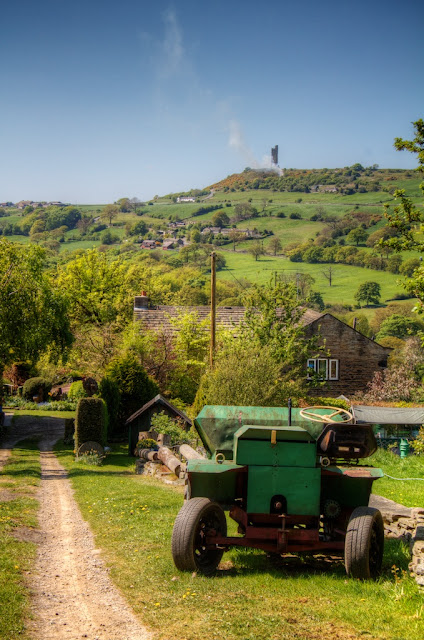 As we walked further up the path the smoke was getting thicker so I popped my long telephoto lens on to take some photos. 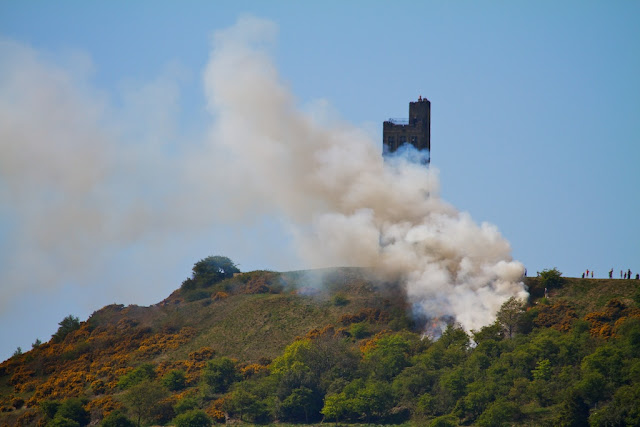 At one point the whole of the tower was hidden by the smoke and we could see the flames engulfing one of the smaller trees on the banking.  It had been one of the driest Aprils on record and the news was full of stories about fires on the moorland areas, particularly in the North West.  A few spectators were stood on the banking and you might just be able to make out the top of a fire engine in the bottom right of the picture. 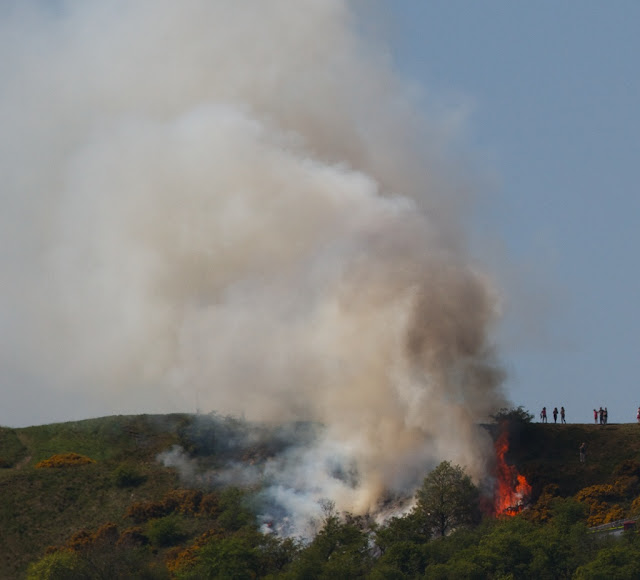 After a little while the firemen got the blaze under control and we continued our walk back to the car at Farnley Tyas.  Had we gone up to Castle Hill for our picnic we might have had a much better view of the action and maybe got a few fireman shots into the bargain. 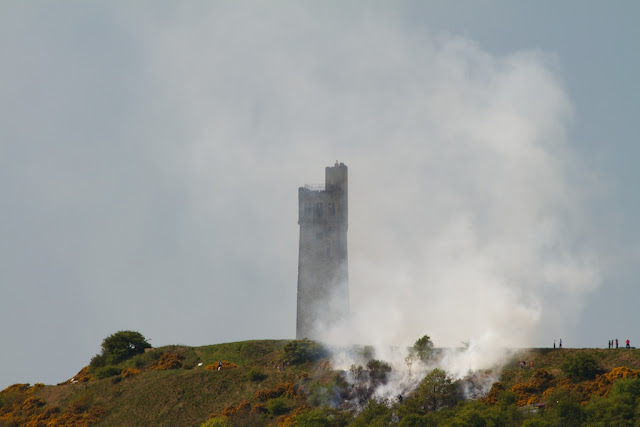