Another walk from the AA cards and another one that's close to home.  The Colne Valley is the next big valley to the Home Valley (where I live) which starts from the heart of the Pennines and leads down into Huddersfield.  As with the Holme Valley there is a great history in the woollen industry but a lot of the old mills have either been converted or demolished over the years.  The Colne Valley boasts a railway and a canal which link the northern industrial and commercial cities of Leeds and Manchester and although the railway is still going strong the canal is now used only for leisure activities.

The walk begins in in the centre of Slaithwaite (local pronunciation Slough'it) although we actually started a little way out of the centre on the road that goes to Meltham.  It was a lovely sunny day with plenty of blue sky and quite warm for early May (yes I'm way behind again). It's quite a steep rise out of Slaithwaite, up the road and then up the path through some fields but then you get the wonderful view back down into the valley. 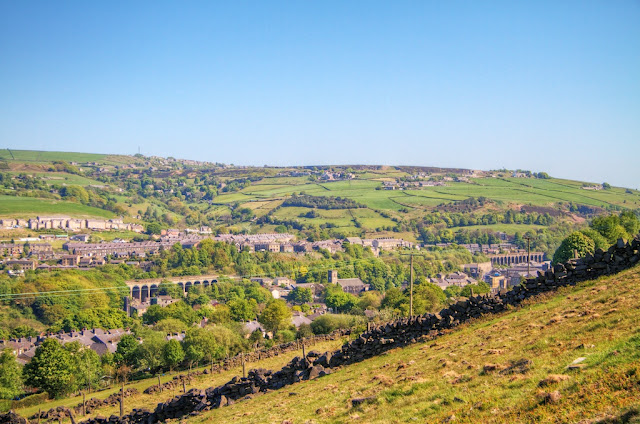 The first half of the walk goes along the top of hillside up towards Marsden with lots of stunning views down into and across to the other side of the valley.  This old tree caught my attention but it doesn't really come out on the shot as the main subject because the background is far too busy. 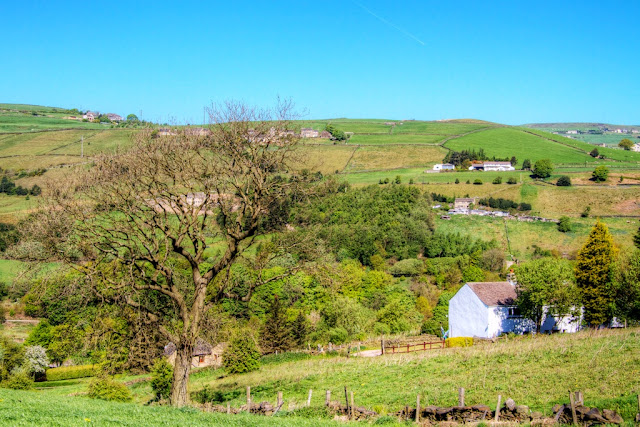 There are quite a lot of old farm buildings along the path including this old barn attached to the end of the farmhouse.  It's quite strange having the wooden flat roof across the gap between the two side bits which has now fallen down.  There's probably a lot of history in this building as it seems very higgledy piggledy in its construction. 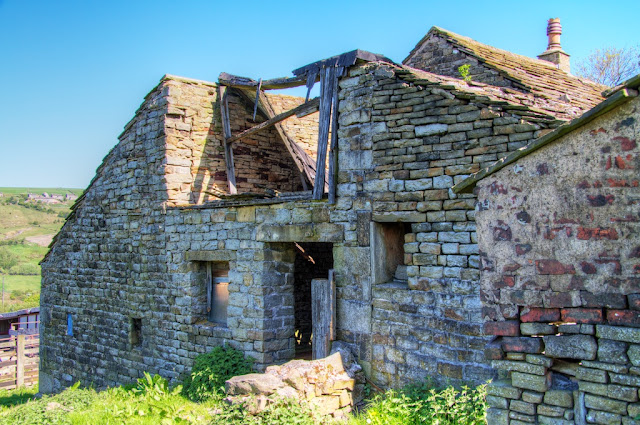 Here's a row of old farm worker or maybe mill worker houses that have long since been abandoned. 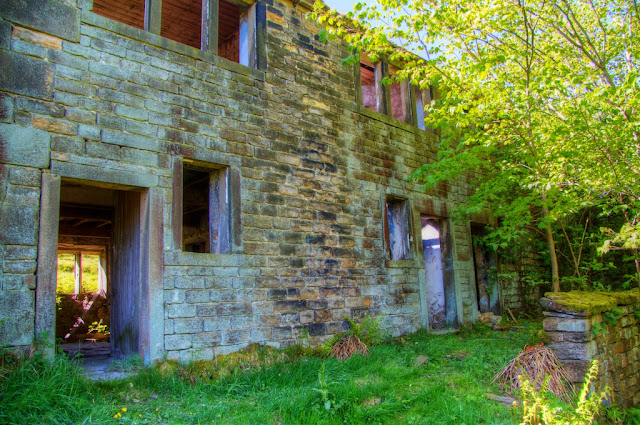 This old fireplace reminds me of the ones that we saw at Beamish in the old miners houses but obviously in very poor condition. 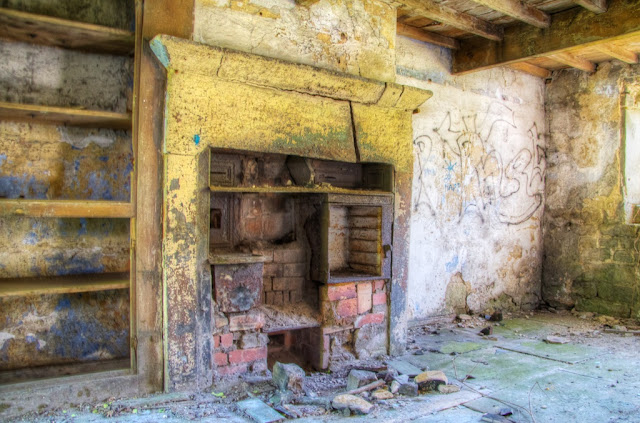 The fireplace in the house next door had this strange addition on it which must have been for some big round vessel to be heated by the fire.  I guess it could have been a laundry or maybe some strange cooking pot. 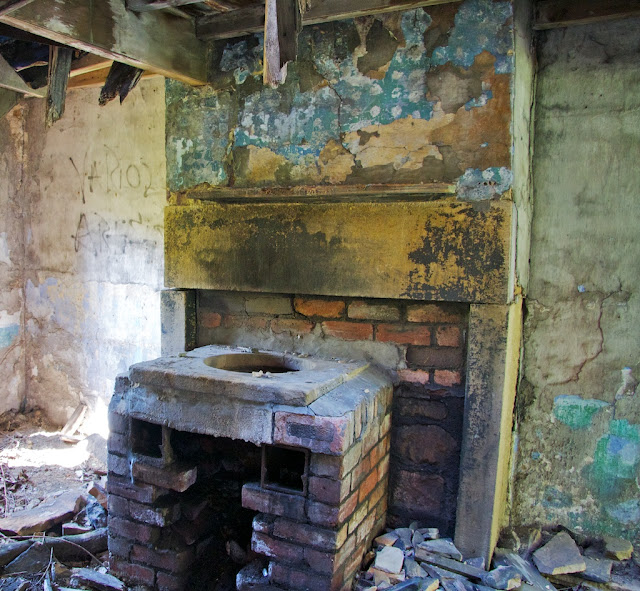 We loved the design of this rusty old gate and there were lots of similar ones in this area.  I wondered if it was some local iron worker that had made a job lot for the farms.  I like this photo because of the colours and the textures in the gate, gate posts, walls, trees and sky. 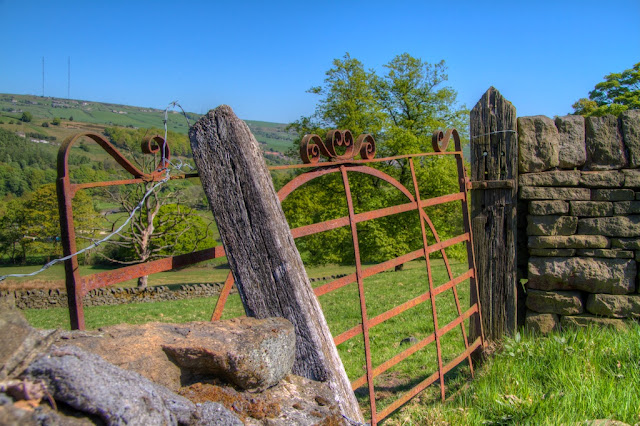 Another abandoned old house which is dated 1754, exactly 200 years before I was born. 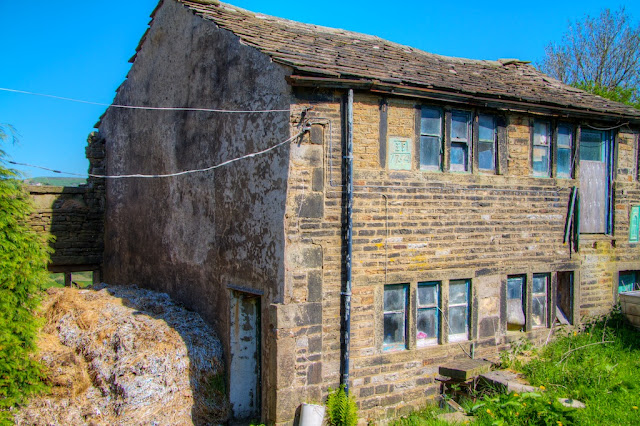 And another old abandoned farmhouse and barn looking a little worse for wear. 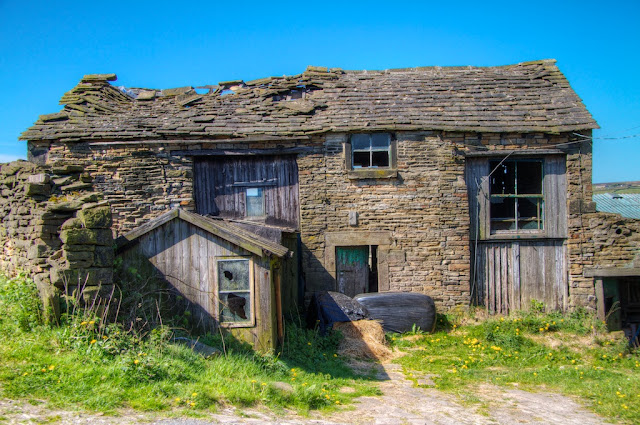 Further along the hillside we get a lovely view down into Marsden with the big mill in the centre and all the rows of houses around.  In the distance is Marsden Moor which is beautiful in summer but very bleak in the winter. 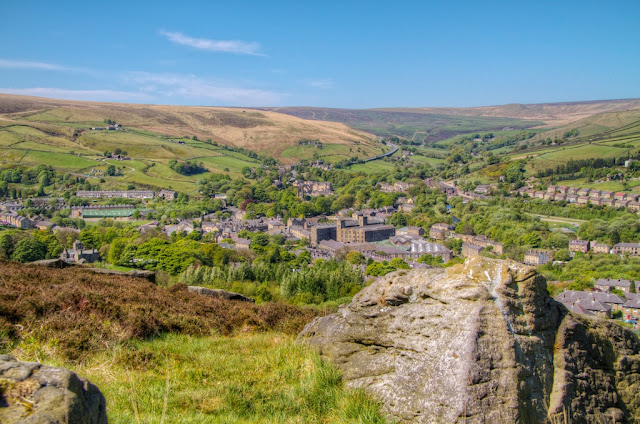 Up on the hillside there are a number of gulleys which feed the local reservoirs and drain some of the moisture from the peat bogs on the top of the moors.  Every so often there are these lovely little bridges that allow the animals and farm vehicles to cross the water. 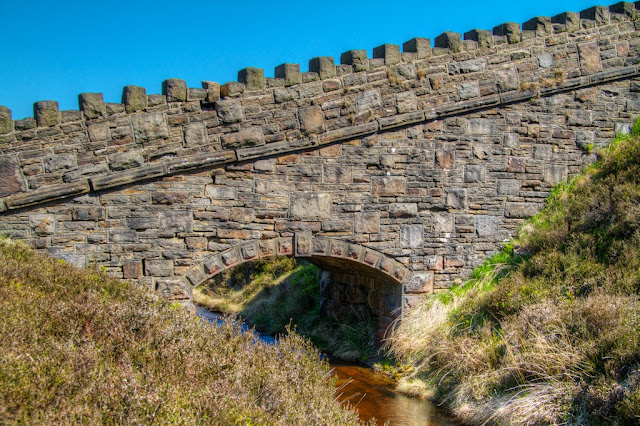 The walk goes a little way past Marsden and around the corner where we have a view of the bottom of Butterly Reservoir and across to the golf course and another part of Marsden Moor. 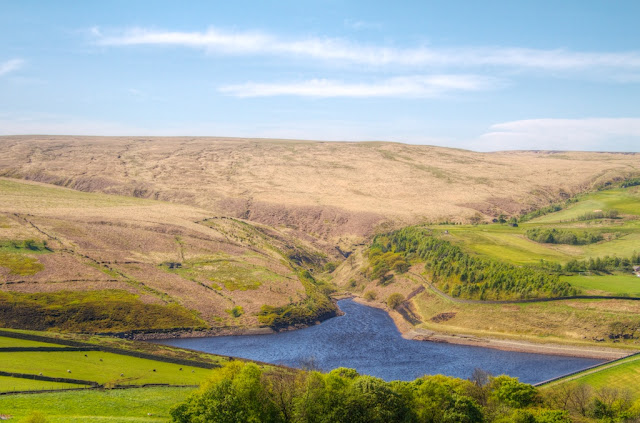 We then drop down into Marsden where there is this lovely little house next to the river called The Old Cobblers. 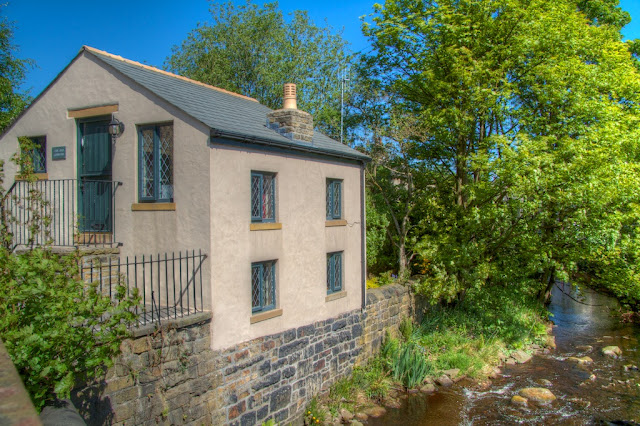 Th second half of the walk is just straight down the canal side and back to Slaithwate.  I've photographed  this walk a couple of times before so we didn't stop for many new ones but I quite liked this lock so here it is. 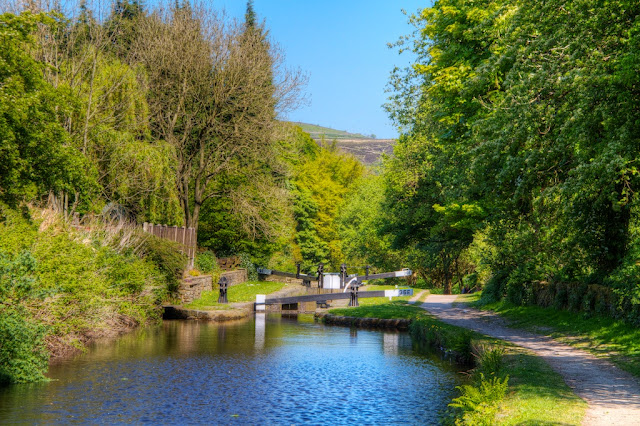 The first half of the walk had been hard going but the second half was just a sprint down back to Slaithwaite. I guess it's designed this way so you get the hard work out of the way at the start of the walk rather than after you've been walking for a couple of hours.  We've done another of the walks over Rishworth Moor which was hard going for most of the way and I will cover it in a later post.
at June 10, 2011