A couple of years ago I spent a bit of time taking photos of churches around the Holme Valley and I felt sure that I'd put them online somewhere but it doesn't appear that I have.  I did have some thoughts of putting them into a book and trying to sell a few to the local people but I never followed through.  I even photographed some people in and around the churches and they asked me if I was going to publish the photos so there could be some interest.

Anyhow, one of the local churches I really love is the one at Hepworth, just a couple of miles from home and usually pretty quiet.  I decided to go back and make some fresh images and compare them with the ones I took back when I first started getting serious with photography.  So this first photo was taken back in April 2008, which surprised me a bit because that's more than three years ago and also explains why there aren't any on line as I didn't start blogging until November 2008.  I have an A3 print of the photo in a folder and I've always thought it looked pretty good with the lychgate  war memorial and the church behind. 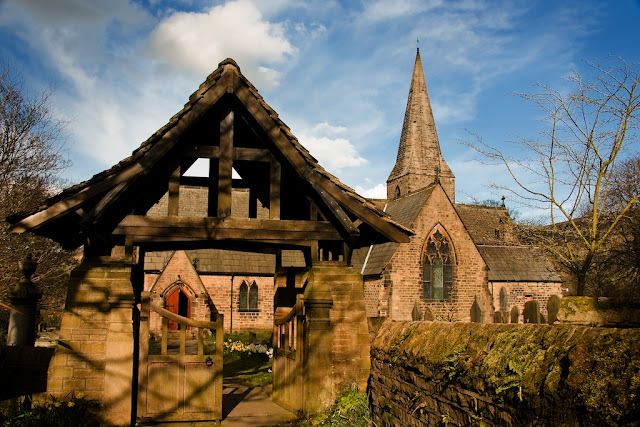 But now when I see it next to the new photo I can see it has a very yellow colour cast, especially on the stonework, which I suspect I may have added in the early days.  It does make the old image look a lot warmer than the new one but now I think it looks a bit odd and not as it should be.  The images are also a bit different as in the original the trees were bare of leaves, they have painted the doors a light green from the original brown and also freshened up the gate and roof trusses on the lychgate. 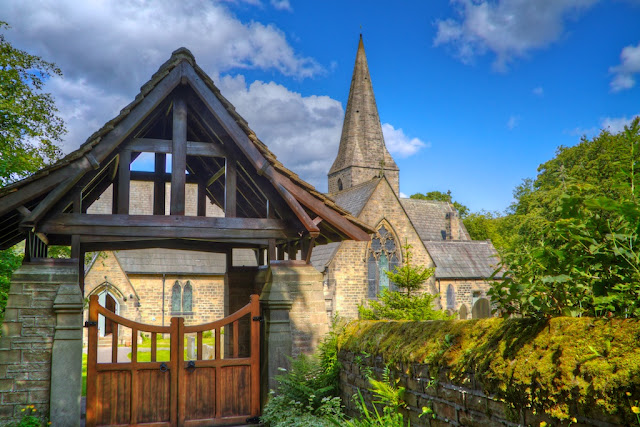 I found some other photos of the church I had taken in June 2008 but the sky was a very bland white and didn't look good at all.  I think I must have gone back to take more photos when I'd bought myself a very wide angle lens which I have also used in these next two new photo to get the whole of the church in the frame.  I had to move the green wheelie bin away from the left end of the church because it was very distracting. 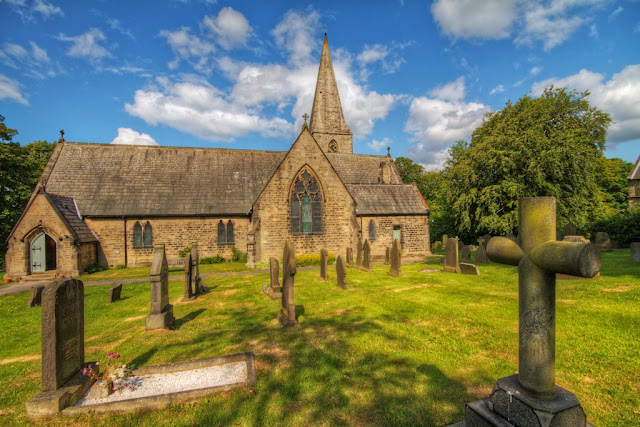 This second wide angle shot is a bit closer and is suffering a bit with distortion which makes the end walls of the church look as though they're falling inwards.  I ought really to correct the distortion but I don't like to spend too much time post processing my images these days. 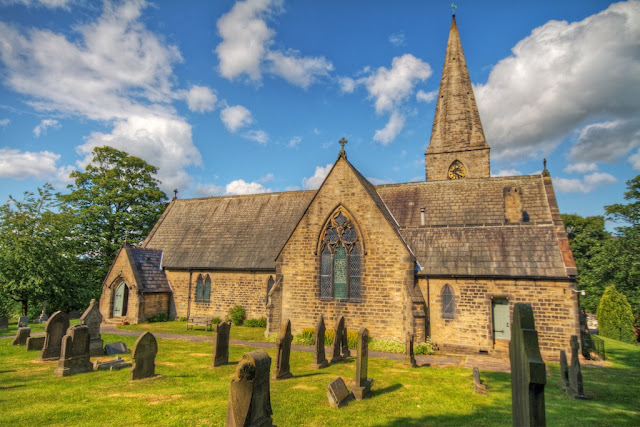 In this next shot I've take the shot from down low and tried to be a bit artistic.  The shapes of two gravestones in the foreground are supposed to being mirrored by the steeple and window behind them.  I'm not sure if it works or not though. 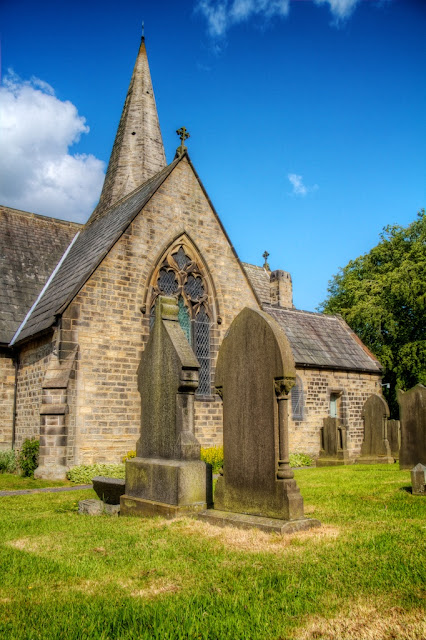 I took a few more shots outside, put the wheelie bin back and went inside.  This first stained glass window is just inside the entrance in a bit of a reception area which is quite dark.  I had to move a few things from the window ledge because it was a bit messy. 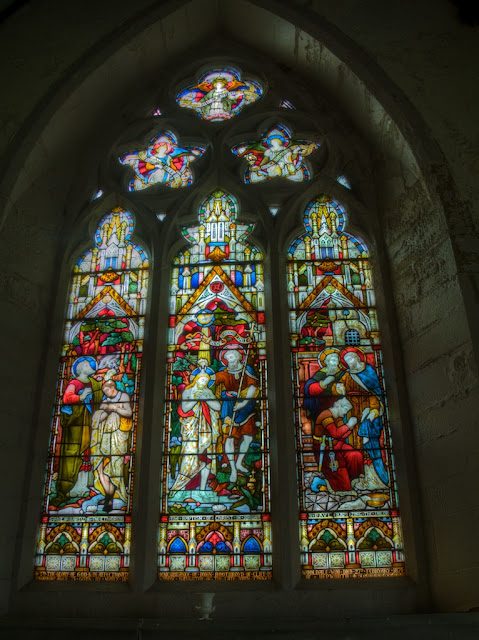 Between the reception area and the main church they have partitioned off a room which looks like it must be used as the Sunday School for the children and other social events.  Then you go through the double doors and find this aisle leading down to the altar.  I love the exposed wooden roof joists in this church, quite plain but simply beautiful. 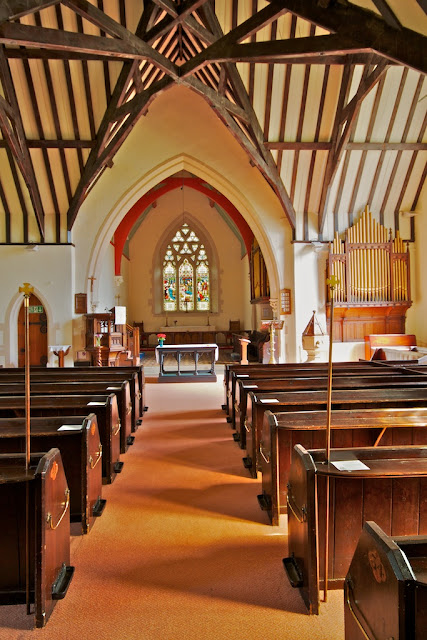 I took quite a few photos of this font with the wooden cloche type cover over it but I was having a problem keeping the images free of wires and plugs which were plugged into an electrical socket behind the fonts stone base.  This ended being my favourite image with the board with the hymn numbers in the background. 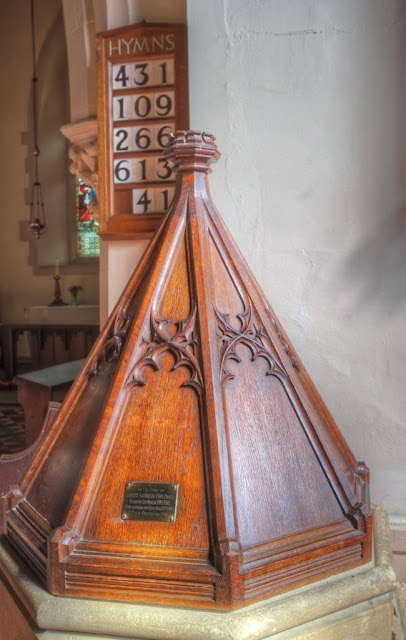 This next image is looking across from the font to the lovely wooden pulpit an choir benches.  Last time I came here the table in the foreground had a wish tree on it where the congregation has written there wishes for people on little cards and hung them on a pretend tree.  When I read some of them I was very touched by their thoughts for others. Today it was a bit bare with just a vase of flowers and the three little candle holders on a mirror. 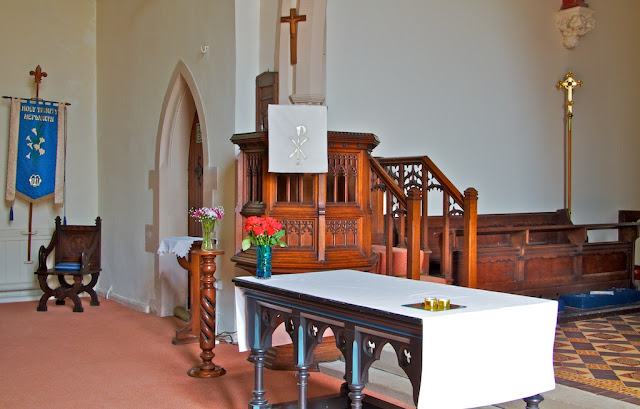 I was quite intrigued by the candle holders on the mirror with the little tea lights inside and took quite a few shots of them.  This was my favourite with the light from the stained glass window reflecting in the mirror. 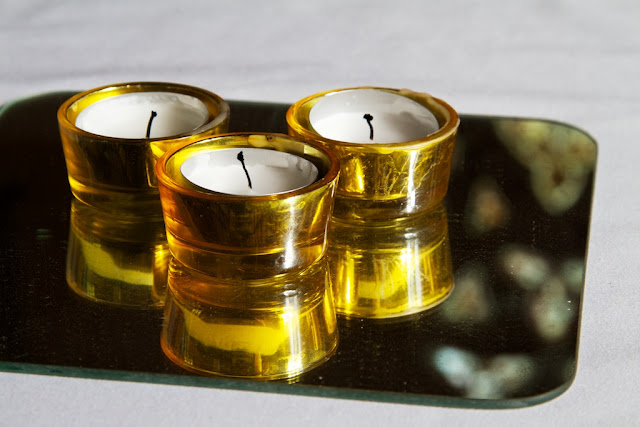 Most of the church was carpeted but this area by the altar has a lovely tiled floor.  Also in this area the wooden roof joists have been painted red and green an look very nice. 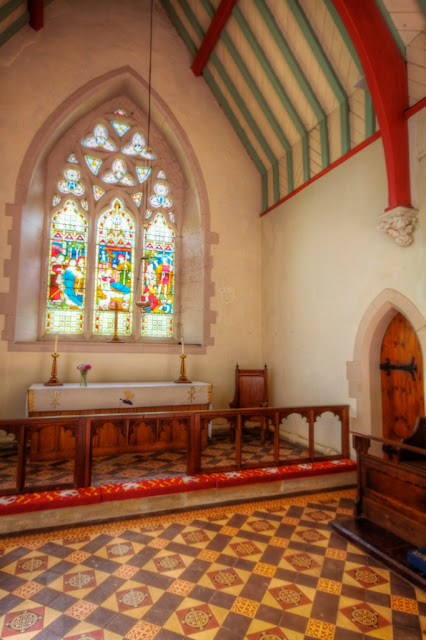 A different angle on the pulpit with the stained glass window behind.  It looks like the paintwork on the arch is suffering from a bit of damp coming in and could do with touching up. 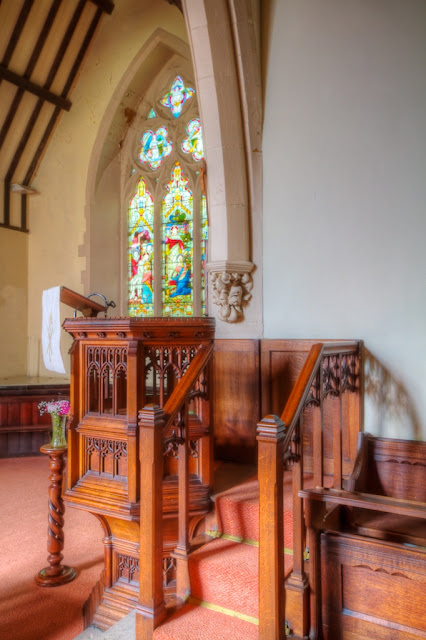 My final shot inside the church is up at the wooden rafters.  It's spoilt a little by the piece of green twine wrapped around the middle which I might try an clone out later. 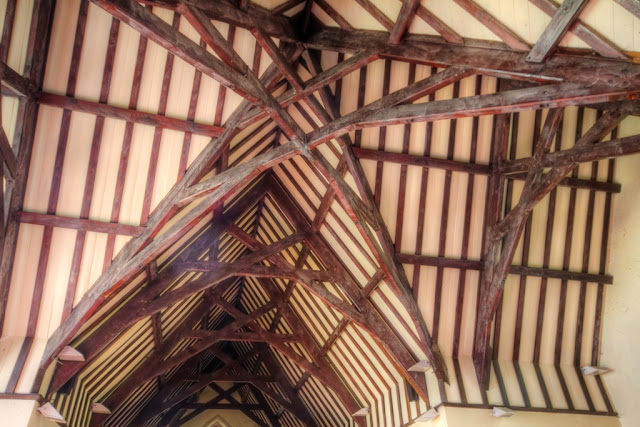 As I took my final shots inside a gentleman came to lock the church up for the night.  I took one last set of shots of the outside and then left to pick my daughter up and bring here back to our house for dinner.  This wasn't my favourite of the last shots but the others had the green wheelie bin on them.  I should have moved it again but it was getting late so I didn't bother, maybe next time. 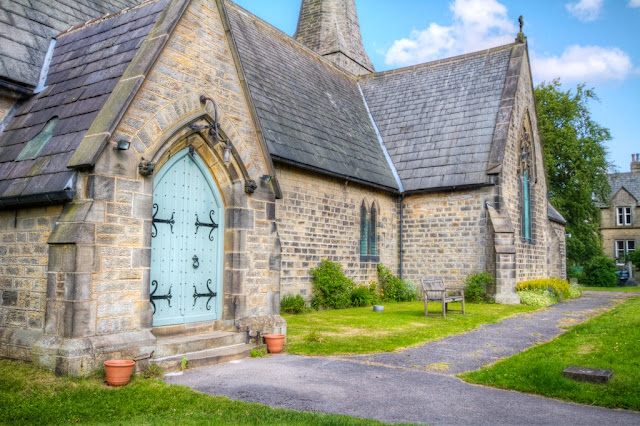