After my visit to the church at Hepworth I've had a renewed interest in updating and expanding my churches portfolio and I've added a churches gallery page to the blog.  I've dropped a set of my old photos onto the page and started adding a bit of text about them (need to do some more yet).  I've also been inspired to try to get back to some of the churches and try to get some new photos in better weather as many of the photos have issues with the sky.  I'd also like to think that maybe my photography has improved in the last few years.

A few weeks back I had a bit of spare time so I went back to the church at Kirkburton, which is about four miles from home, to make some fresh images.  When I went here before it was a Saturday morning and there were quite a few people about getting the church ready for the Sunday services and tidying up the graveyard. It was one of my first forays into approaching people and summoning up the courage to ask if I could photograph them.  I need to do it more often but usually when I'm out and about there's not many people around.

When I set off from home I just took my camera with a 50mm lens and my tripod as a bit of an exercise in using a minimal amount of equipment.  As happens quite often for me the weather starts out bright and sunny but them almost immediately starts to deteriorate.  The church has a piece of land across a little lane which is an addition to main graveyard around the church and it has a little lychgate at the entrance.  In this photograph I am inside the new graveyard looking out towards the exit and with the old graveyard in the background.  I should maybe have moved the green bin out of the frame or perhaps I should have a go at cloning it out. 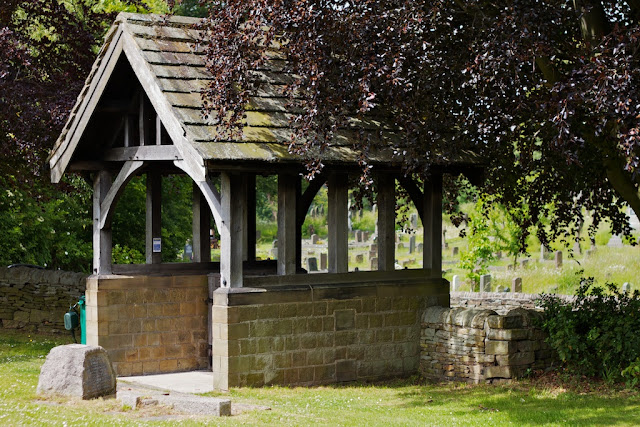 After wandering around a bit I headed towards the church itself and the cloud was beginning to increase very quickly.   There are a lot of big trees in the churchyard and so it's  quite difficult to get a clear shot of the church from this side.  I seem to remember having the same problem last time I was here.  As I was taking this shot of the tower a gentleman came out of the church and said "I'm just going to get something from my car, I'll be back in a minute".  I said "OK" and thought why is he telling me that, I wasn't here to see him.  I carried on taking the shot, and true to his word he was back. 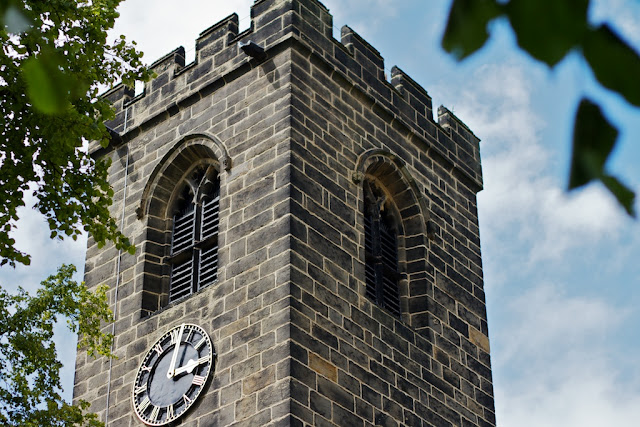 He asked me if I was wanting to look around inside and I said that I would as the weather conditions weren't that good for many more photographs outside.  Last time I came here I didn't get around to going inside so it was all new to me.  The gentleman started to tell me about the history of the church and about some of the notable things inside and out.  It's a very old church site going back to the middle ages some 800 plus years ago.  It turns out that he is a local historian with a long association with the church so he had plenty to say about the church and the notable people from it's past.  He was also a keen photographer and in the past had been a professional working for one of the local papers.  He showed me some pictures that he had created in Photoshop giving an impression of how the building had been changed over the centuries which was quite impressive.

It was quite dark in the church but I mounted my camera on the tripod an made a few images.  The choice of the 50mm lens was perhaps not too suited to the task as I really needed something a bit wider.  I will definitely need to go back and take some more photographs both inside and outside this church.  The altar area seemed to be the oldest part of the church with the bare stone walls and this lovely stained glass window.  In the side of the wall was a little hole (or squint) which went into a hermits dwelling that was built onto the side of the church.  St. Agnes lived here for over twenty years and the hole was to enable her to "squint" at the clergymen as they performed their services. 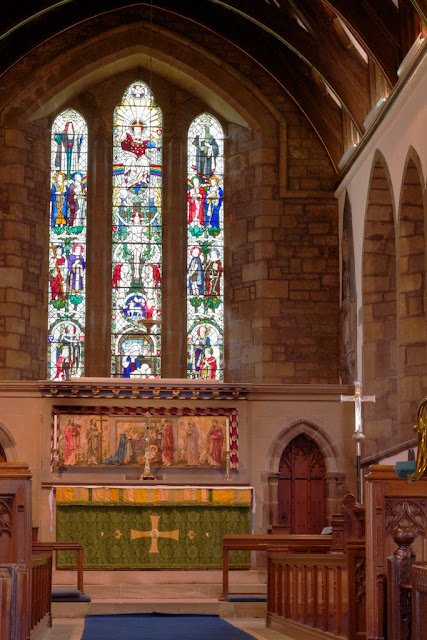 To the side of the pulpit was another, smaller stained glass window which looked much newer than the one behind the altar.  Here the walls had been plastered which also made this area look a lot newer. 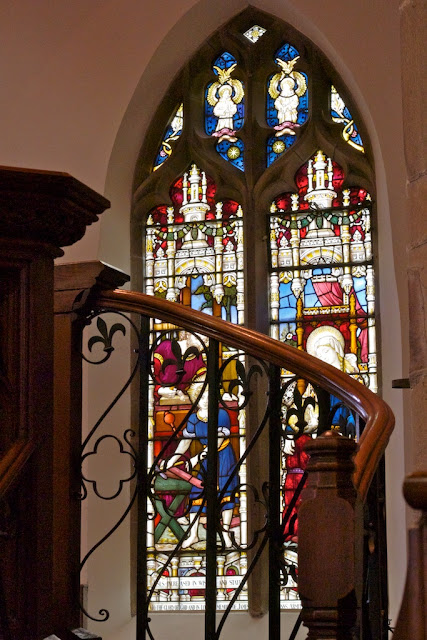 At the back of the church was this medieval font which had been taken away from the church but was later returned.  The font was big enough to cover a baby completely with water at the christening.  The gentleman had told me that in the olden times they only changed the holy water once a year so it was a bit of a health hazzard towards the end of the year.  The cover was a much later addition and was hung from chains attached to the ceiling. 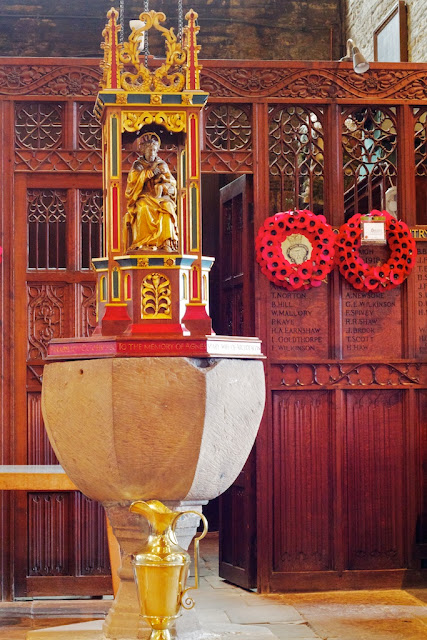 My final photos were of the gentleman who I met outside and had spent time with (and I wish I had got his name, maybe I'll see him again on my next visit).  He was a little reluctant to be in front of the lens as he was more used to being behind it, but I have never had any strangers I have met refuse to have their photo taken.  He was very tolerant of me asking him to move to a spot near the font where I could use the light coming in through one of the windows.  I used a very wide aperture to get a shallow depth of field so only the main features of his face are in focus.  I really love this photo and especially the black and white conversion.  I have made a print an put it into one of the second hand frames that I have been buying from the local charity shops with the intention of giving it to the gentleman if I see him again.  Unfortunately I managed to break the glass so I'll have to try and get a new piece or borrow one from one of the other frames to replace it. 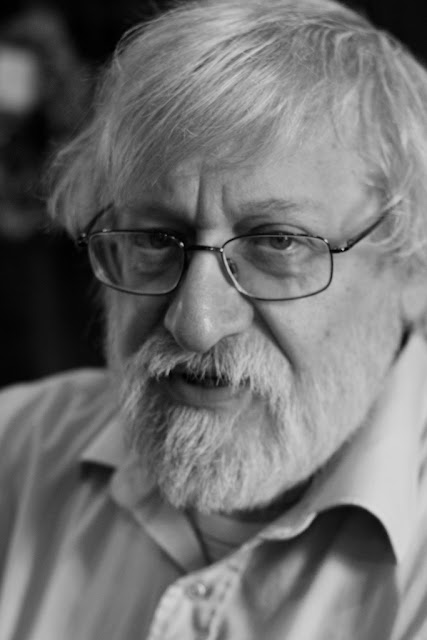 Since this trip I've been to yet another church and also been on a couple of long walks so I really need to concentrate on catching up with my blog posts.
at July 20, 2011

the gentleman's nameis Robert carter a local historian of kirkburton