St Paul Church at Armitage Bridge is one that I've always wanted to photograph.  When I was making church images a few years back they were having some work done and had scaffolding around the church so it got missed.  With my renewed interest in my church photography I thought I'd take the opportunity to fill a gap in my gallery.

It was a lovely day with deep blue sky and a few fluffy white clouds for contrast.  Behind me it was a lot cloudier and I had to wait for breaks in the cloud to get some of the photos.  The church feels to be in an odd place because, until recently, it's not next to any housing where the congregation would be.  A commemorative bridge has been built from the road across to the church but previously it would be necessary to go over a hump back bridge and down a lane to get to the church.  It's hard to explain really.  Opposite the church is a big old mill which has now been split into units and there is a cricket pitch adjacent to the churchyard.

The first couple of images are taken from the lane and through a nice stone arch at the entrance to the churchyard.  The first I've used a portrait orientation to use the whole of the arch to frame the shot. 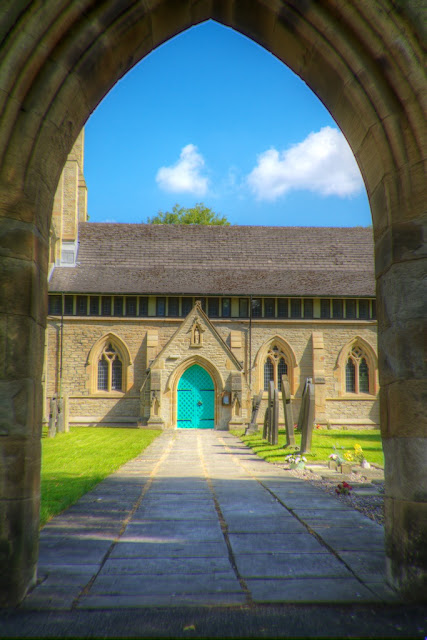 The second shot is taken from the same place but I've changed to landscape and zoomed in so just the sides of the arch are on the edges of the frame.  This also has the effect of removing the sky from the shot at the top ad the big patch of shadow from the foreground.  The closer shot is also showing a lot more detail with the little statue over the door and the odd angles of the gravestones. 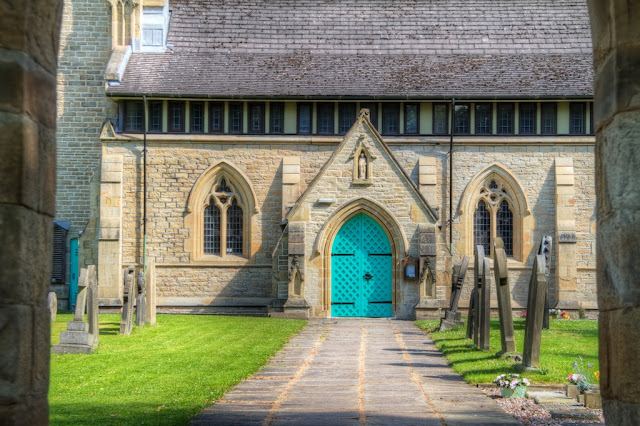 In the next shot I have moved inside the archway and gone a lot wider to capture the whole church and the trees at either side.  Because of the wide angle on the original shot there was quite a lot of perspective distortion which I've tried to correct but I think the tower looks a bit bent over now. 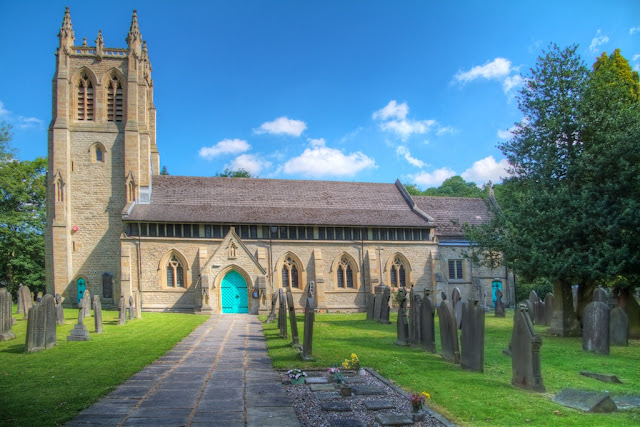 In this next shot I have moved into the churchyard where there is a line of gravestones leading up to the tower. 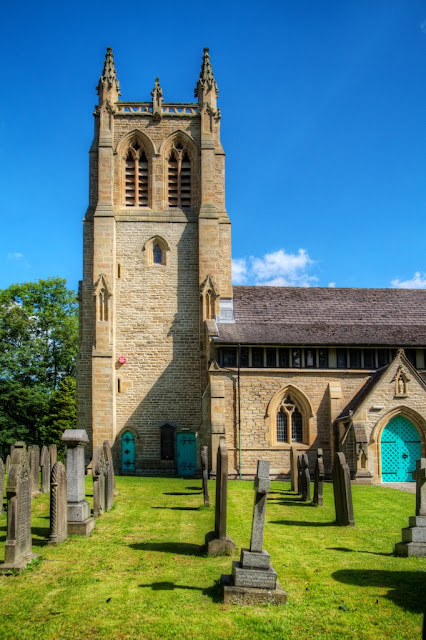 In the next image I have moved to the other side of the churchyard to  get more of a view across to the tower.  I wanted to go a bit further across but the trees on the right started to get in the way. 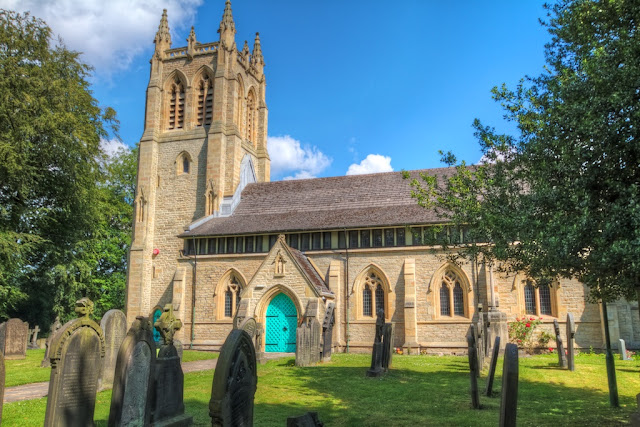 So I moved a bit closer which gave the opportunity to have the gravestones in the foreground but now the tower is a bit out of focus towards the top.  On this photo and the previous one you can see where the roof line used to be a bit higher and at a steeper angle.  I suspect that originally the roof came down straight to the top of the wall whereas now the angle changes to enable the line of small windows on top of the wall.  The addition of the row of windows was probably added to make it lighter inside.  Unfortunately the church wasn't open and there was no-one about so I wasn't able to find out. 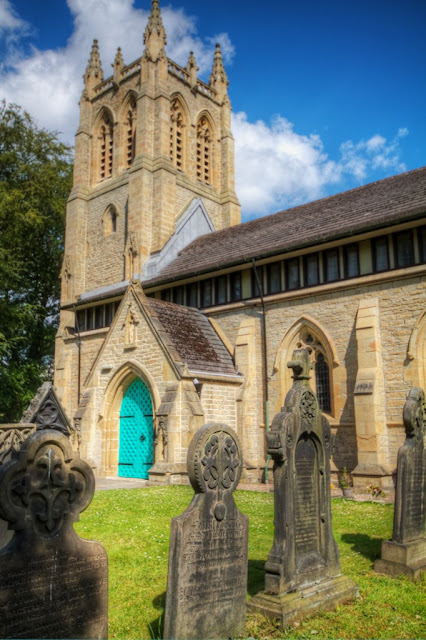 There is a lovely war memorial with this tall cross on the top with the names of local people that had lost their lives in the first world war. 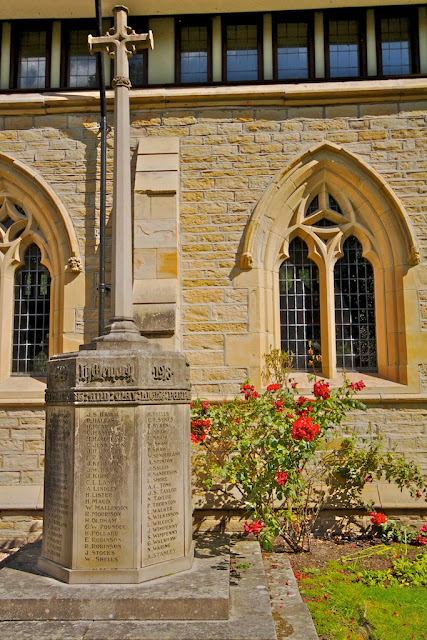 In this last shot of the church I wanted the war memorial in the front with the tower behind so had to use this funky angle to get them both in the frame.  Again the tower is a bit out of focus, I guess I needed a smaller aperture but it's quite difficult to see until it's on the computer screen when I get back home.  I'll maybe need to go back again to get some more shots and maybe if the church is open I can take some photos from inside too. 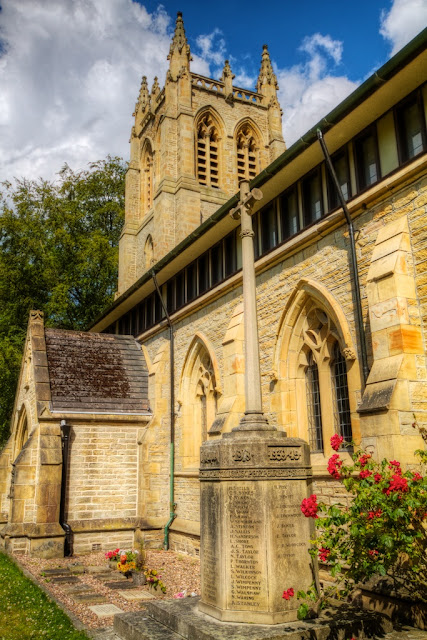 After I had finished at the church I went to the mill across the road where one of the units is the North Light Gallery where there is always some kind of exhibition to visit.  On this day it was the work of the students from the Holmfirth High School from their 'O' Level exams.  My daughters went to this school as it's about a ten minute walk from our house.  There was a lot of interesting stuff and some of the work was excellent.  It's fascinating to see how the 15 to 16 year olds are seeing the world and how much talent they have.  I didn't take any photos inside the gallery as I wasn't sure if that would be allowed and I didn't want to get ejected.

After visiting the gallery I went to Beaumont Park where I've been a few times and had a couple of blog posts in the past.  Last time I was there they were just doing the finishing touches on the new roof to the bandstand which previously was just an open square with the wall around.  I must admit I've looked at this before and thought it would be good to restore it and make use of it. I'm very pleased to see the work completed and I'm very impressed with what they have done.  The whole park has had a lot of work done on it in the last few years but I suspect it's a big job to keep on top of the amount of work required.  Hats off to the Friends of Beaumont Park for all their good work. 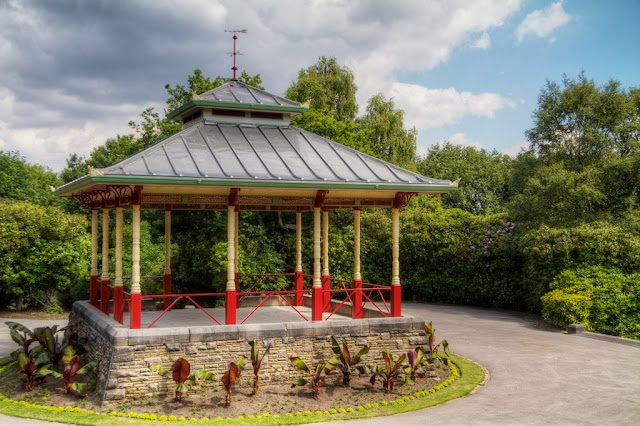 As I walked around the park the sun was disappearing behind the clouds you can see in the bandstand photo.  I was struck by this island in the path with the old bit of tree trunk and the fluffy pink flowers.  I think it makes quite a nice photo and I might print it out on one of my big sheets of photo paper to put up on my wall. 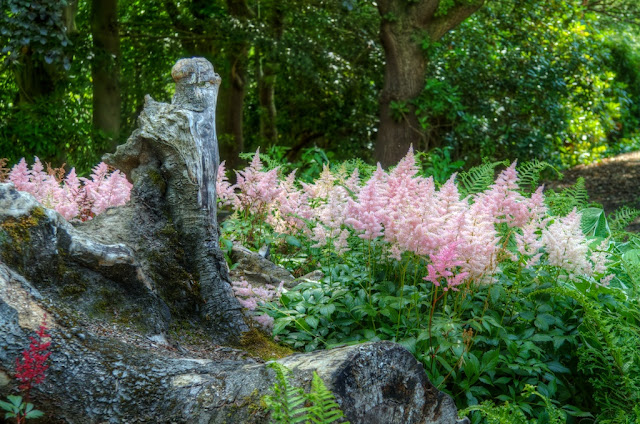