We've not been anywhere this week so I looked back through some of the folders from the last couple of months that I haven't posted.  It was yet another of the AA Walks in West Yorkshire and it was another sunny, almost cloudless day.  We started the walk in the village of Fairburn which is East of Leeds just North of where the A1 crosses the M62.  From the village we went down a path into the Royal Society for the Protection of Birds (RSPB) sanctuary called Fairburn Ings.  I think I may have posted about this place before a couple of years ago.  Its on the site of an old coal mine and is made up of regenerated slag heaps and water filled areas.

As we walked into the sanctuary I took this photo of the main lake through some trees on the banking.  It was supposed to be a bit arty with the silhouetted trees making a frame for the water and trees behind. 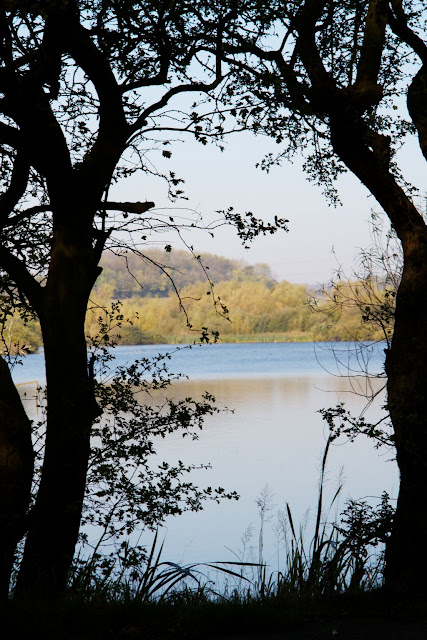 There are a number of hides around the lake where you can sit and watch the bird out on the water.  Unfortunately the first hide looking out onto the smaller lake had been closed because someone had tried to burn it down.  This next photo is of the swans, cormorants, ducks and seagulls out on the islands in the middle of the lake.  There is quite a selection of different kinds of ducks out on the lake including shelducks, pochards and tufted ducks. 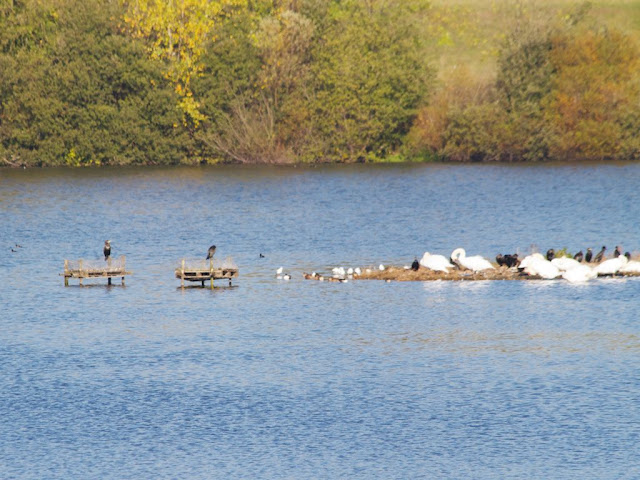 A bit further around the path was some bushes with what at first looked like pink berries.  On closer inspection they were more like flowers with orange berries inside.  I took a few photos of the whole bush but prefer this close up of one of the twigs. 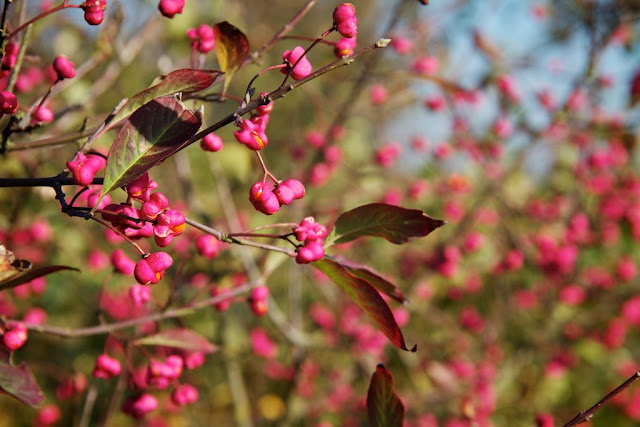 Continuing along the path you end up at the RSPB office and shop where there's toilets and a cafe.  Opposite the building is a small area with lots of bird feeders full of all sorts of different food.  This particular one appeared to be the favourite for the Gold Finches as they kept swooping in and out from the surrounding trees. 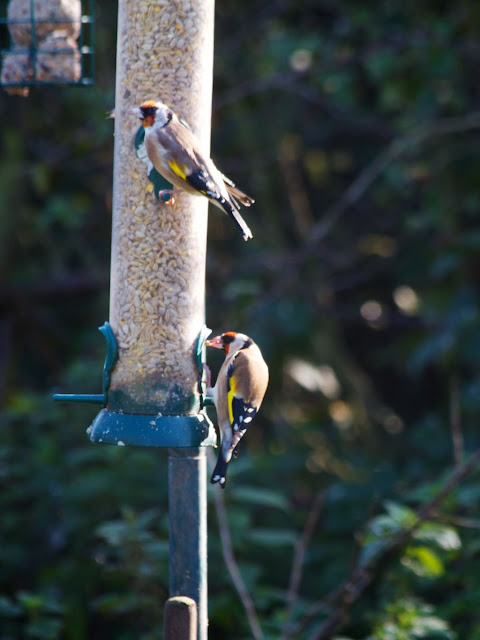 We walked through the car park onto a walkway to the big lake and there was a seagull perched on the fence.  I managed to get fairly close before it flew off.  In the picture there are some more gulls sat on a wooden perch out in the water. 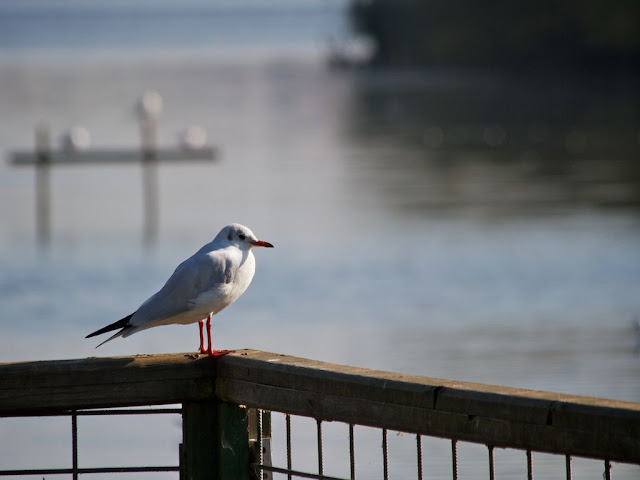 We left the bird sanctuary and headed North on a path towards Ledsham.  This next picture is looking back towards the lake with the cooling towers of Ferrybridge power station in the background.  I guess in the past the power station would have taken all of the coal from the mines in this area. 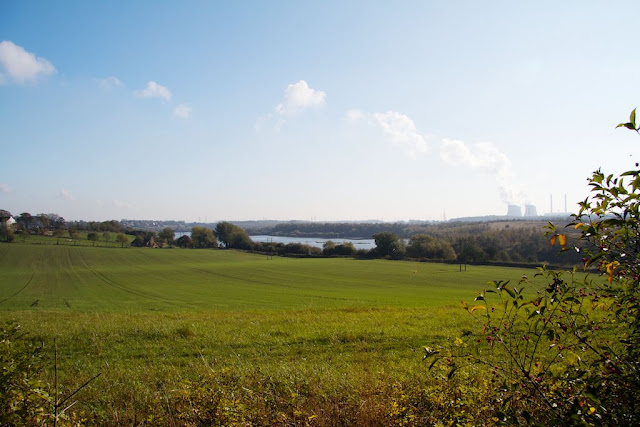 When we reached Ledsham we went to a pub called the Chequers Inn where we had a lovely lunch and a bottle of wine in their beer garden.  I'm glad we came for the walk on Saturday because the pub is closed on a Sunday and we'd have been very disappointed.  The story of why it's closed on Sundays is on thier website, linked above.

There were lots of lovely buildings in the village including this ancient church which has a history going back into the 6th century (yes 6th), making it one of the oldest churches in England. 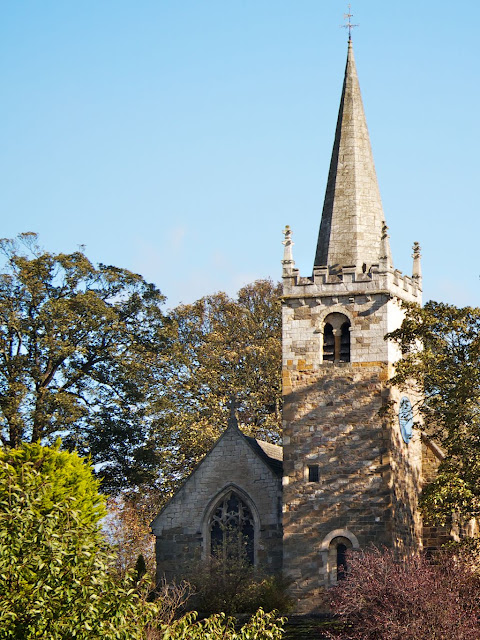 Behind the church was a row of lovely old cottages with this beautiful lawned area at the front. 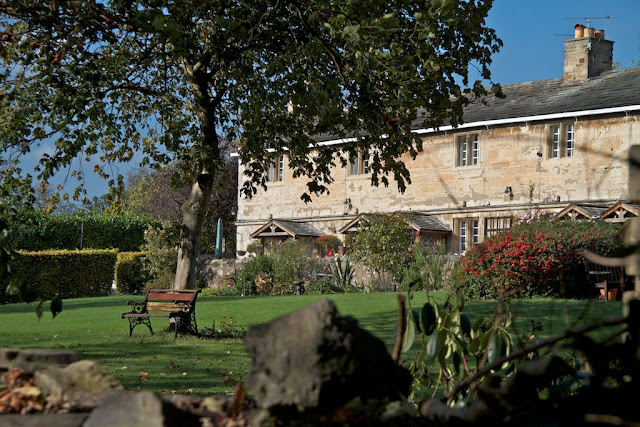 It was very dark inside the church so it was quite difficult to get these next two pictures.  The first is of the main aisle in the oldest part of the church. 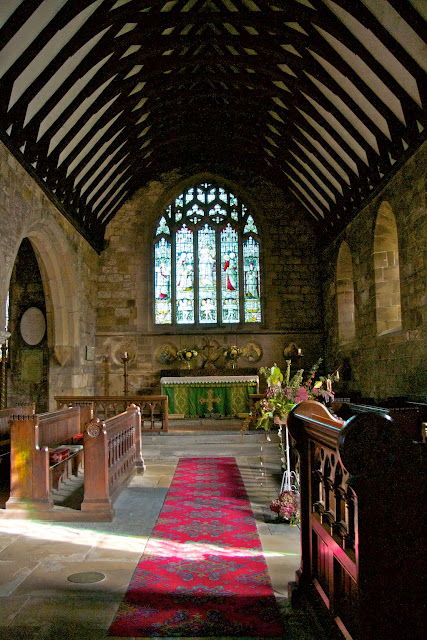 The next picture is looking through into what was a second aisle which was built much later and used to double the size of the church.  The church has had many changes over the centuries including several different tower designs.  In the first picture of the church you can see where they have used a completely different type of stone when they added a steeple to the existing tower.  In the picture below they have removed the back wall of the church and put in these big arches to open up the two aisles to each other. 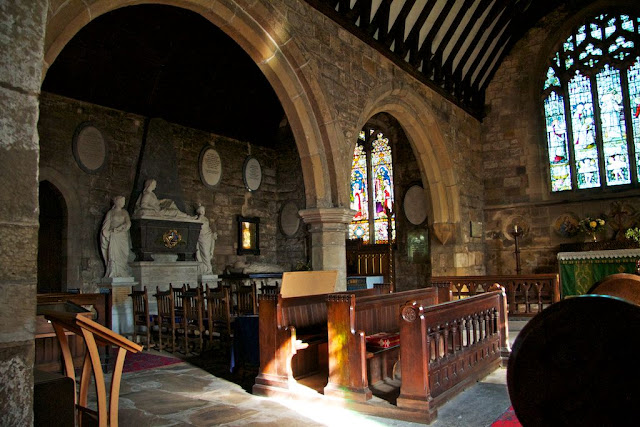 After leaving Ledsham I took this photo looking to the rolling hills to the North.  I particularly like the shadow of the trees behind me stretching across the newly mown field. 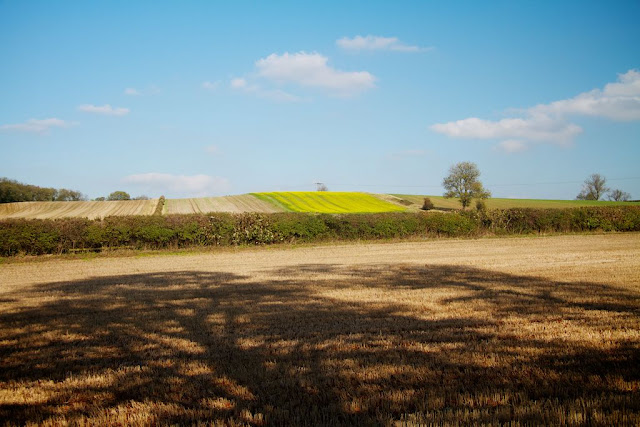 I quite like this photo of the trees but it is slightly spoilt by the electricity pylon in the background.  I guess being so close to a big power station it's quite hard not to get the pylons or electric lines somewhere in your view. 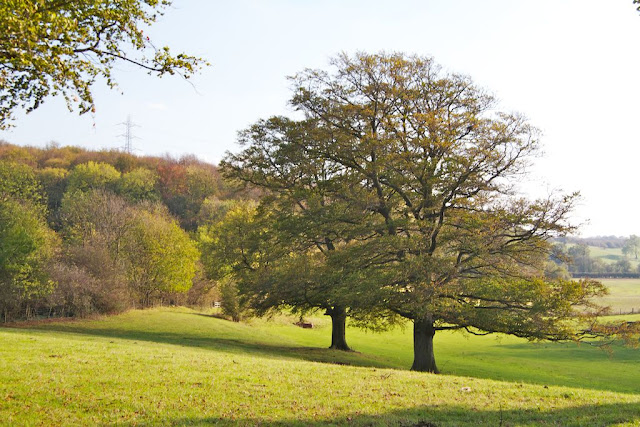 This photo is looking back towards Ledsham with the church and some of the big houses visible within the trees.

A little further along was this field with the haystacks.  It's hard to see in the picture but this field had quite a slope in two directions.  Th front haystack looked as though it was ready to fall over. 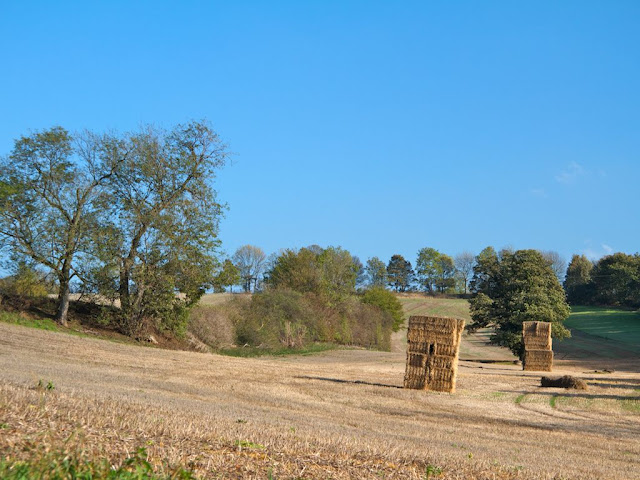 We were almost back in Fairburn now and this picture is another grand looking tree in a field.  Again unfortunately spoilt by the power lines going across the sky in the background.  I did consider removing them and I might yet. 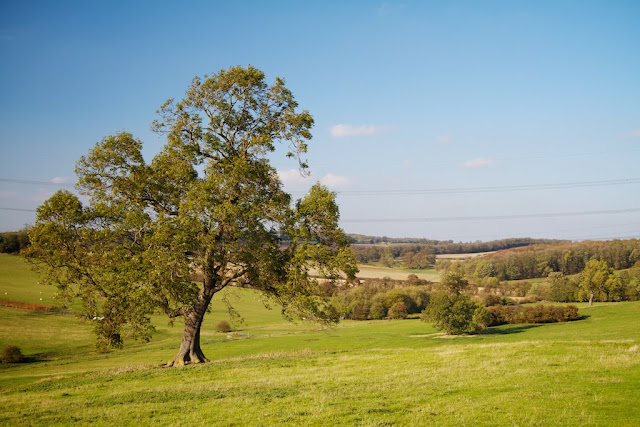 Well it had been a beautiful day for the middle of October, but as we've had even more beautiful days since it doesn't feel that special now.  We're in December now and it has been the warmest Autumn for a few years.  Of course now there are suggestions that we might be heading for a drought but I'm sure we're going to get plenty of wet weather in the next few months so I don't take that too seriously.  It's raining quite hard now as I type this so it doesn't look as if I'll get out much tomorrow for a walk.
at December 02, 2011