I have been experimenting with creating time lapse video from stills and have popped a couple of them on YouTube.  The first one was back in late October where I was trying to get a nice sunrise but where I initially wanted to shoot from was covered by low cloud so I had to find somewhere else.  By the time I got to this place I had missed quite a bit of the sunrise but managed to capture about 500 shots to make this first video.


It was a bit of a learning experience and this is what I figured out.
1. Take the photos in jpeg instead of raw because they take about a quarter the size and don't fill my memory cards as quickly.  They also are less power hungry on the computer when processing them.
2. This clip took about 45 minutes to take so have something else to do while your waiting.  I'll take my other camera next time and maybe my iPod so I can listen to some music or a podcast.
3. Reduce the time between shots so there are more stills available to create the video.
4. Keep warm, it can get pretty chilly if you are standing about in the early morning or evening.

Since the first experiment I've not had the opportunity and suitable weather conditions at the same time to do more time lapsing until last weekend.  So Saturday morning I planned to get up early but unfortunately my bed was warm and comfortable so it wasn't that early when I set off.  As before I was a bit late getting into position and then the sky was too clear with a band of low cloud just on the horizon where the sun was coming up.  So my first set of shots where of a piece of clear orange sky with the smallest bit of cloud drifting across.

I was at Scout Dyke reservoir again and the water level was lower than I've ever seen it.  For the first shots I was well down towards the water to try and get some reflections from the water but that didn't seem to help.  I tried a different angle and position as the wind was picking up and bringing some more clouds over into the scene.  But they weren't coming over fast enough and they were just grey blobs when they arrived so not very interesting.  It was all very muddy in the reservoir bottom and where the mud dried up a bit it had cracked and made some patterns on the ground which may add interest to the shots.

In the meantime I was wandering around with my other camera looking for a few still photos to take and I noticed the start of some pinkness in the clouds in the other side of the sky to where the sun was rising. I spun the camera around 180 degrees for my next attempt and captured the clouds clip below.  It was very windy and even on my tripod the camera was getting blown about which is why it was so shaky.  Also I was wandering about taking other shots and I had the radio trigger in my pocket and I think I must have gone out of range a bit because there seems to be some missing frames occasionally.

As the above clip was being captured I noticed that the clouds in the sky in the other direction were starting to come over more and getting some colours in them.  I swung the camera around again on the tripod to continue filming towards the sun.  I took a couple of steps away and then the tragedy happened. Over went tripod with the wind and the camera landed lens front down in the thick mud.  Here's the shot just before it went over ... 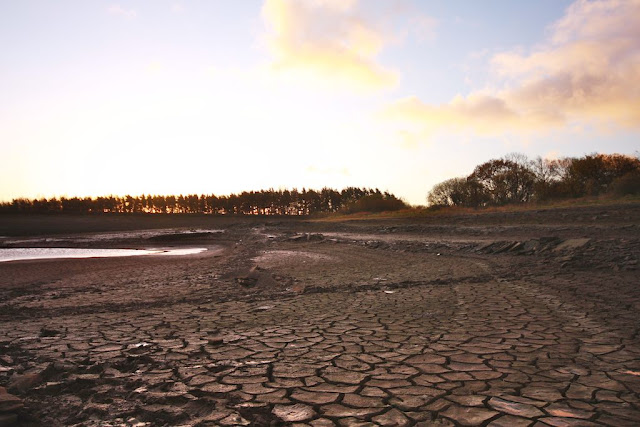 ... and this was the first shot after I picked it up again.  The remote trigger was still firing away even when it was face down in the mud but those picture were a bit dark. 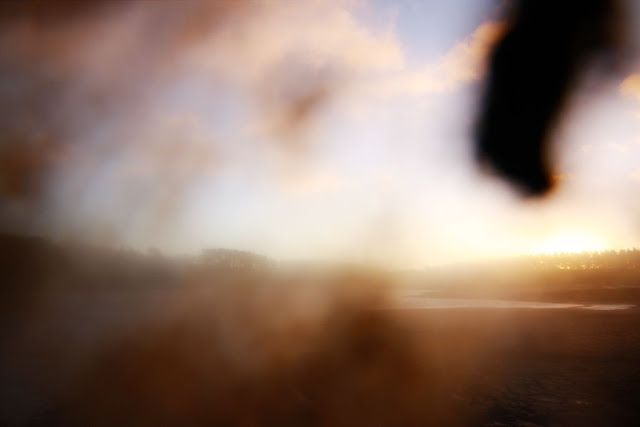 I decided it was time to go home so I dragged my stuff up onto the bank and here's a shot of the camera still on the tripod ,with a dirty, dirty lens. 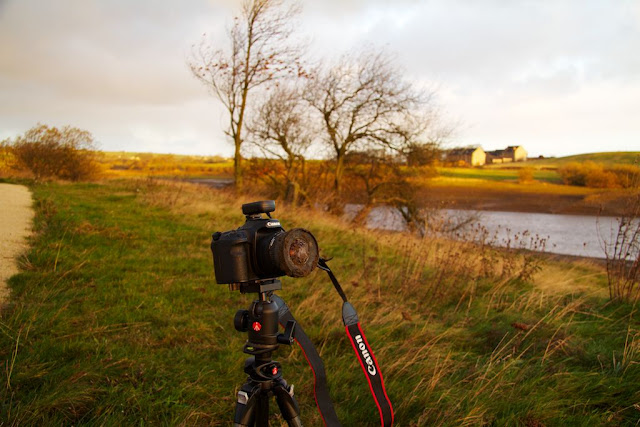 When I got home I took the lens off the camera for one last shot before I got to work getting it clean (it took quite a while). 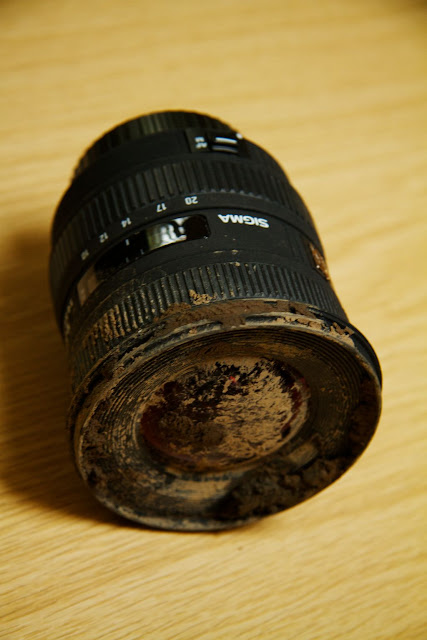 So it was only a minor tragedy and the clip is OK, not good.  What did I learn this time.
1. If it's too windy the time lapse is going to be shaky unless you can really tie the camera down.  I have a reasonable tripod, and it was very low but I still had issues.  I wonder maybe I should have removed the neck strap because that was getting blown about quite a lot and was probably contributing to the movement.
2. Especially if it is windy, make sure the tripod is secure.  Maybe I should have tied a rock to it or opened the legs wider so it had a more sturdy base.
3. Don't keep changing position because if I had left it in the original position the clouds would have come over eventually and my lens wouldn't have been covered in mud.  Also I noticed as I was leaving that ground which was in the frame on the clouds movie started to get lit up by the orange light of the sun, so continuing that clip may have had some added interest later.
4. If wandering around taking other pictures while the time lapse is running it is probably a good idea to leave the remote trigger near the camera to prevent missing frames.

I'm looking forward to my next attempt, hopefully I will have more success.
at December 07, 2011