After we had been to Domfront town in the morning we were going to visit the Apple and Pear Museum near Barenton but the owners of the hotel told us that it was a bank holiday and it might be closed.  So instead they suggested that we go to Saint-Frambault because there was a country show for the Assomption (Assumption of Mary into Heaven) Bank Holiday (15th August) and there would probably be cider there anyway.  Another plus is that it was only about 10 minutes from Domfront and also we saw a leaflet about the fair in the tourist information office in Domfront which looked very interesting.  I've just processed the photos from the afternoon and I have more than two dozen photos and a couple of video clips so I'm going to make it into three posts.

As we drove to Saint-Frambault we arrived at a road block about 2 kilometres from the town where we had to pay our 5 euro entry fee and directed to continue down the road to the car park.  It seems that the whole town and surrounding area was blocked off for the fair, the French know how to do these things well.  The car park (rough old field at the side of the road) was almost full but there was a gate through to the next field for the overflow.  This first photo was from the exit of the car park and is a big advert for another fair at Barenton on the 1st September. 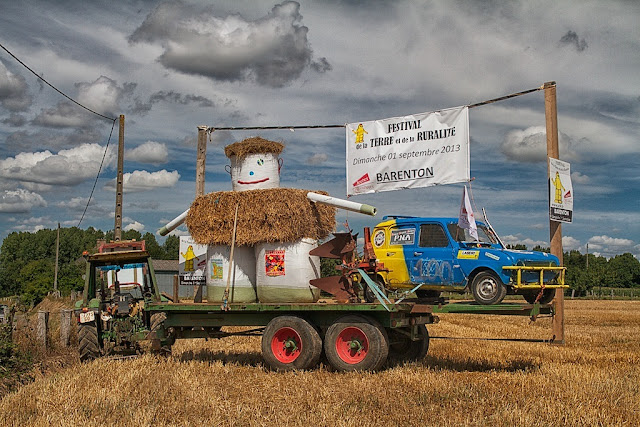 There was a short walk into the town and all of the gardens had lovely flowers and hanging baskets outside.  As we reached the edge of the town the street was full of wooden toys for people to play with.  Some of them were known favourites and others were things that we'd never seen before. 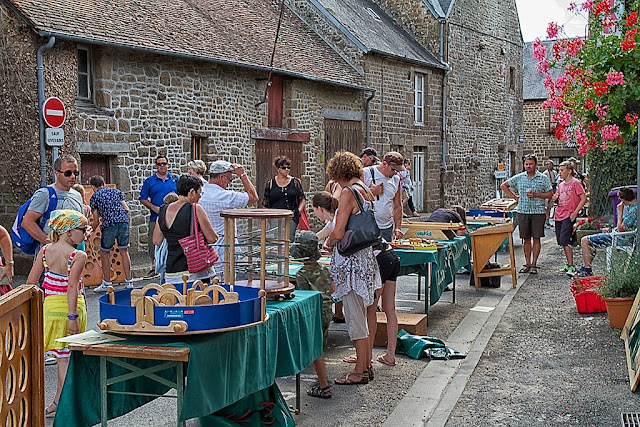 These two lads were engrossed in their games.  The one on the right was trying to get the wooden ball down the track but I'm not sure what the other one was doing.  Each of the games had a sheet with instructions but it was all in French so we were struggling to translate them. 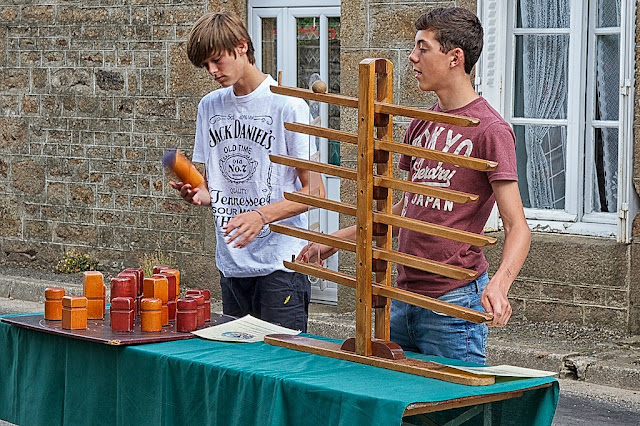 In the centre of the town there was lots of stalls selling all sorts of local produce and goods.  This stall had a massive range of different tomatoes including some very weird looking ones and all different colours. 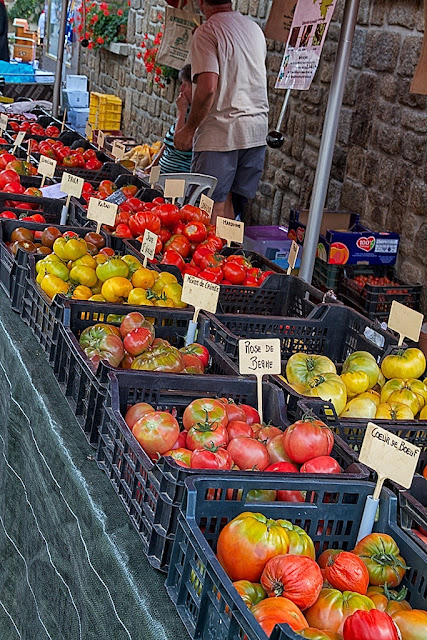 This stall had loads of tiny shoes.  I couldn't figure out whether they were real shoes or just for ornaments.  They were all pretty colours though. 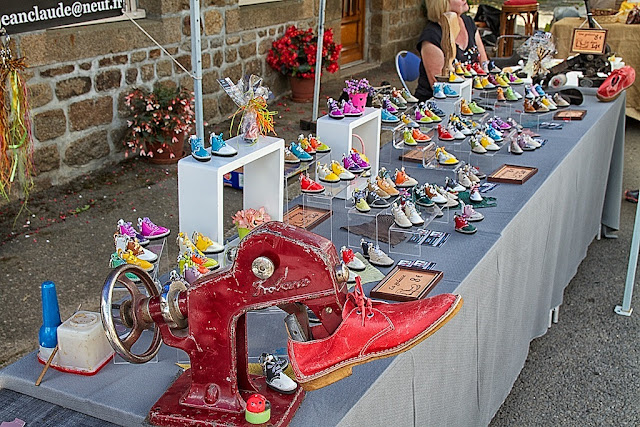 This stall had all sorts of wooden things including toys, useful objects and ornaments.  I was particularly interested in all these little owls. 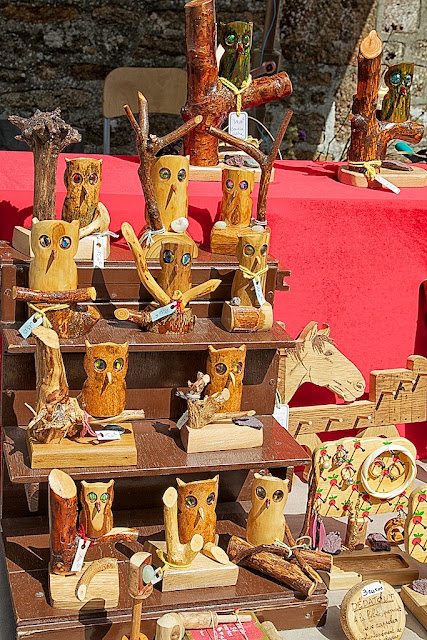 Around the corner from the market stalls the forge was working and the blacksmith was busy making horse shoes. 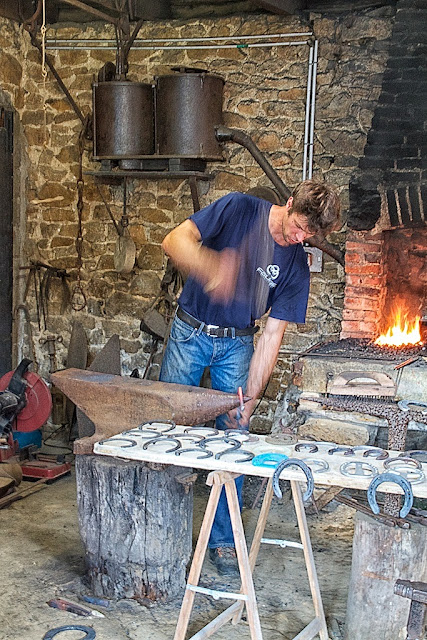 In the centre of the town was this lovely church with the usual market square in front of it.  Today instead of the market were a couple of stages where there will be musicians playing later in the day. 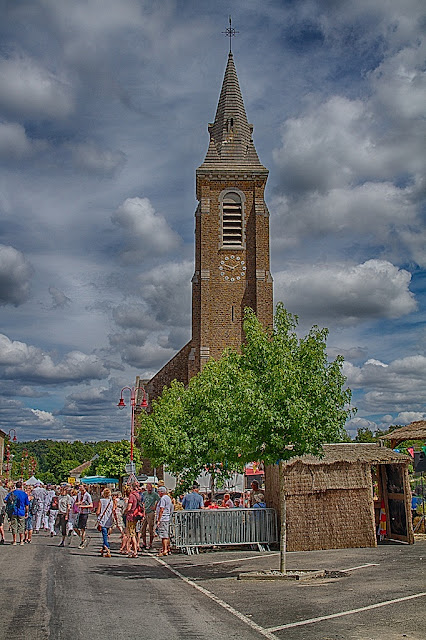 In a field near the church was lots of farm machinery and animals including ducks, geese and hens.  These donkeys and horses were in a pen in the middle of the field. 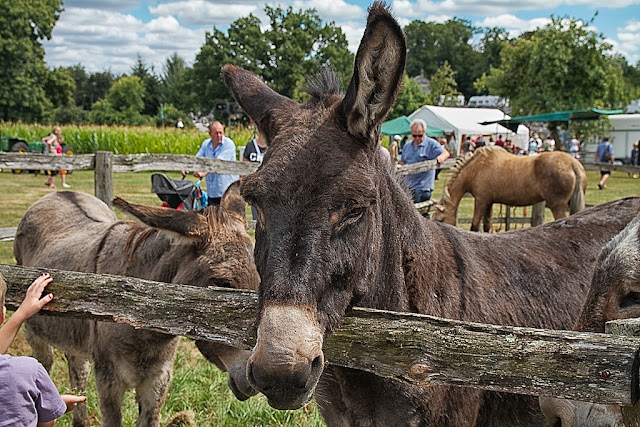 As we walked around the field there was a lot of activity in a roped off section of the field so we went over to have a look.  There was a dozen or so men dressed up as old fashioned farmers who were laying down some corn on top of a large piece of tarpaulin.  The fellow in the white shirt was going around interviewing the "farmers" and was apparently cracking lots of jokes because the crowd were laughing out loud. 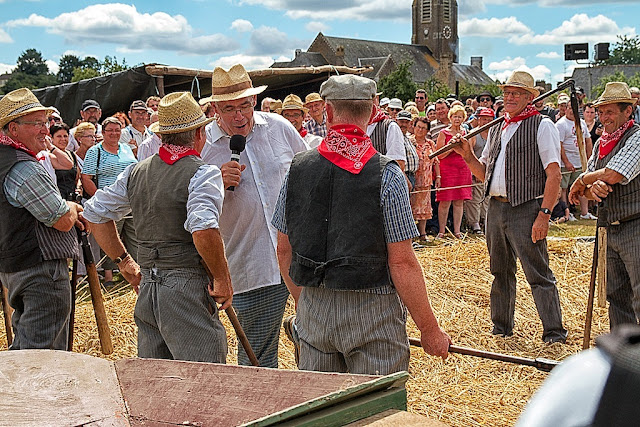 After the interviews and more jokes the men stood in two rows facing each other and started smashing the heads of corn with their jointed sticks.  They all worked as a team and moved up and down the area of corn until they had covered it all twice over.  Heres a very short clip of them in action.


When they had finished the women stepped forward and removed the stalks of the corn to reveal the grains covering the floor.  It seemed a bit labour intensive to me but everyone seemed to be having a good time. 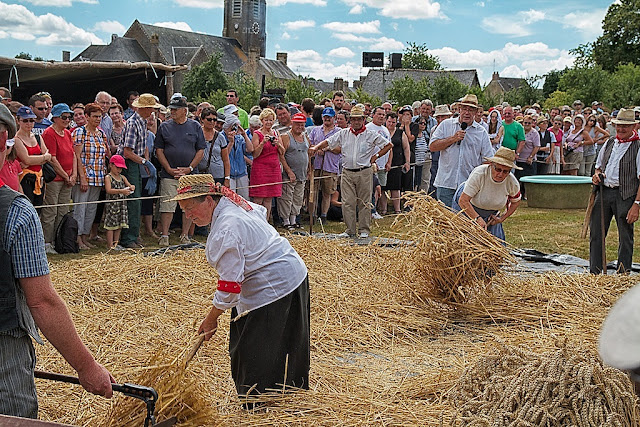 Further up the field another set of workers were preparing a mechanical threshing machine so I guess that was going to be the next demonstration.  We've seen mechanical threshing a few times so we decided to move on to see something else, there was lots going on all around the town.  Part two will be coming very soon.
at September 07, 2013

Colin, this stuff is just great. Looks like you and the locals were having a great time.