It's taken longer to get around to Part Two than I had expected but here goes.  After the threshing demonstration we went down to where the big food marquee was at the edge of the town.  It was fairly empty by now as most people had eaten but there was a bit of activity around a pretend wedding.  We saw a similar thing at another rural show in France a couple of years ago.  In this first photo a couple of the older guests to the wedding were having a bit of an amorous moment as everyone else watched on. 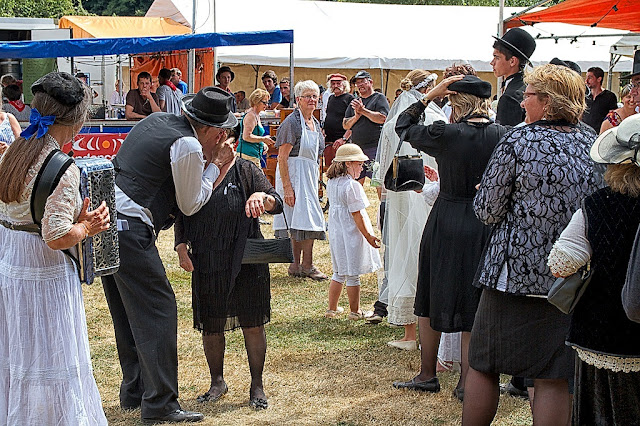 Here the very young bride and groom were in a procession around the area dressed in their old fashioned finery.  The little bridesmaids and page boys were also dressed up smartly. 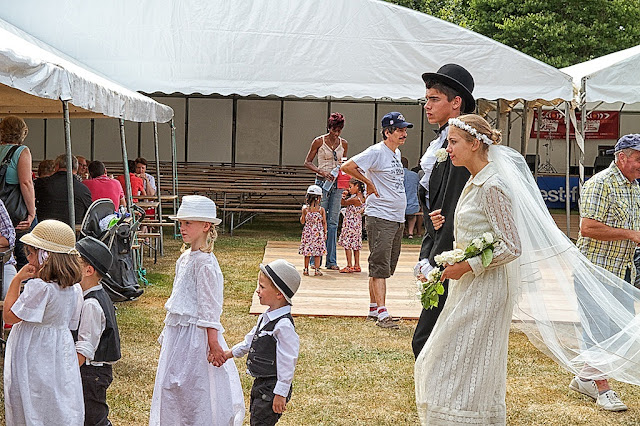 After the wedding procession we went back into the centre of the town in time to see the procession of the washer women.  We had seen the notice about the washing demonstration at 3pm at the old laverie building but hadn't realised there was a procession before where the washer women paraded the laundry items around the town with a musical accompaniment. 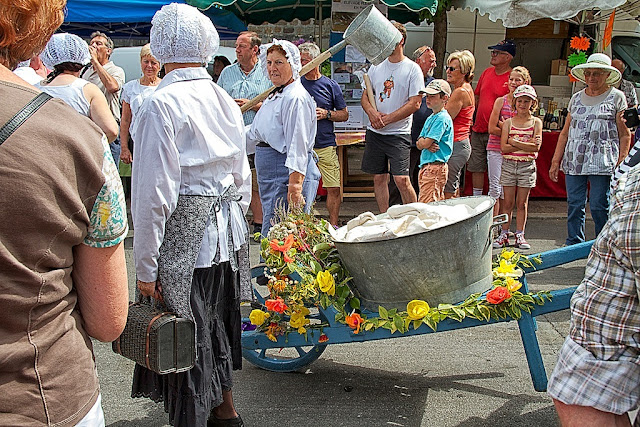 As they reached the laundry building there was a big crowd ready to watch the demonstration. The second wheelbarrow appeared to just have the bars of soap and cleaning tools in it. The fellow in the straw hat carried a big ladle which he used to transfer the water from the boiler into the washing barrel. 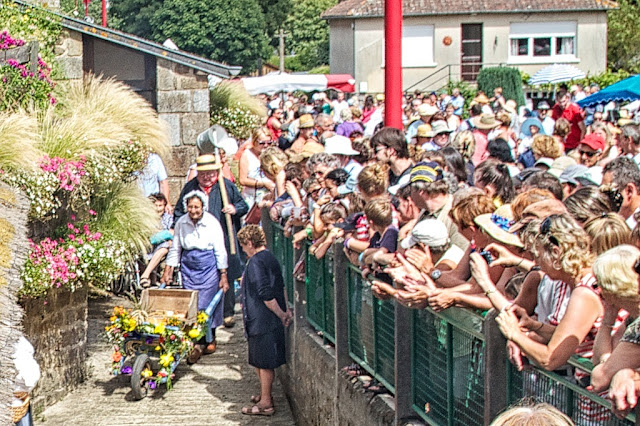 Down in the laundry the washer women assembled ready to do their work while the accordion players continued to play in the background.  Unfortunately I couldn't get a good position to take photographs and managed to make them loose their heads.  We decided to come back later and went to have a drink and look around the old cars that had paraded from the field earlier and were now parked around the centre of the town.  I'll post the car pictures in a separate post because there were quite a few. 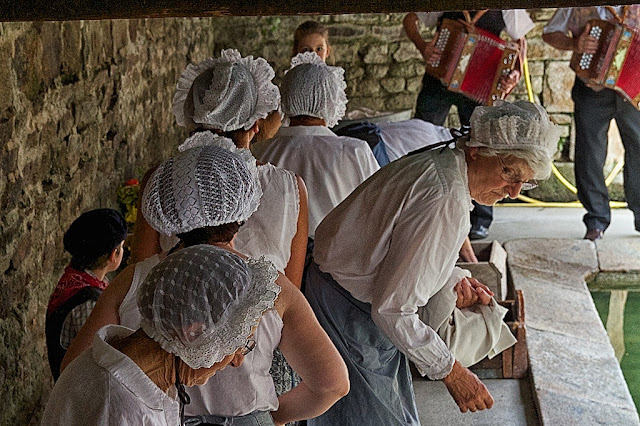 When we got back to the lavarie the women were still hard at work but the crowd had dispersed a little so I managed to get closer to the action.  Here's a very short clip of them hitting the laundry with wooden paddles to knock the dirt of of them.


They also used scrubbing brushes to get the washing clean. 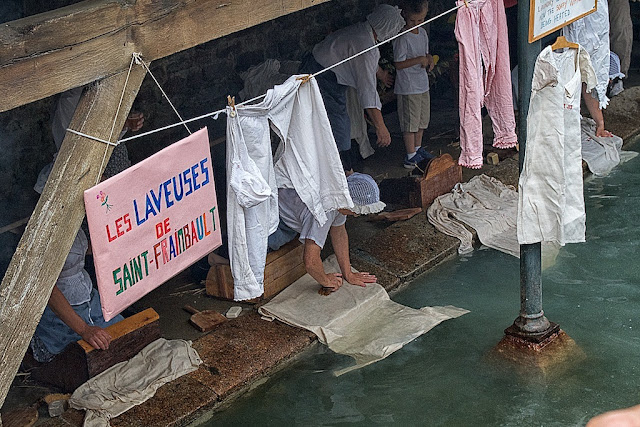 Here a young lad volunteered to give them a helping hand. 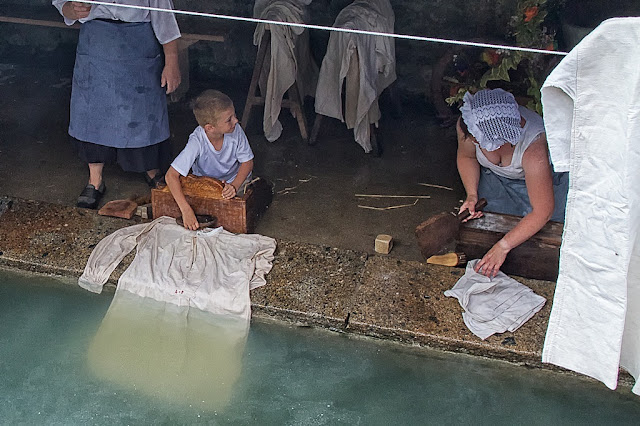 After hitting or scrubbing the clothing it is then rinsed out in the pool part of the laundry. 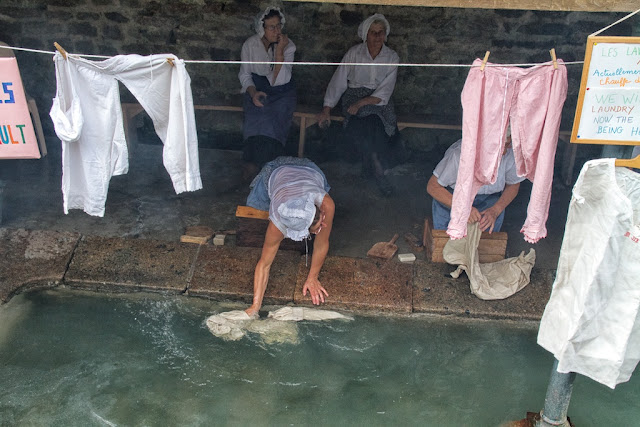 The old gentleman was ladling the hot soapy water from the boiler on the left into the wooden laundry tub.  We might have missed it but I guess the clothes were put in here before being beaten and scrubbed at the edge of the water. 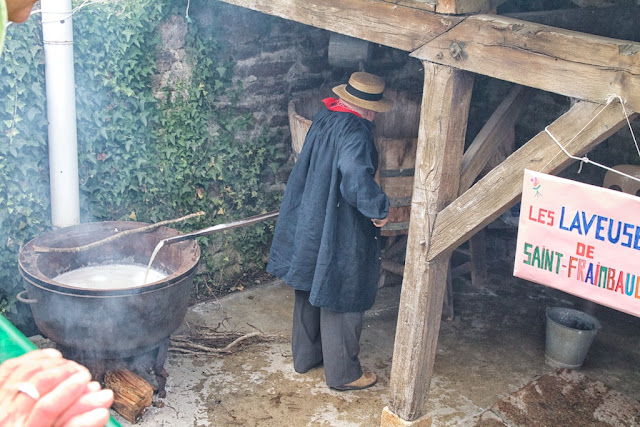 For some reason one of the washer women went for a paddle in the water, much to everyones amusement. 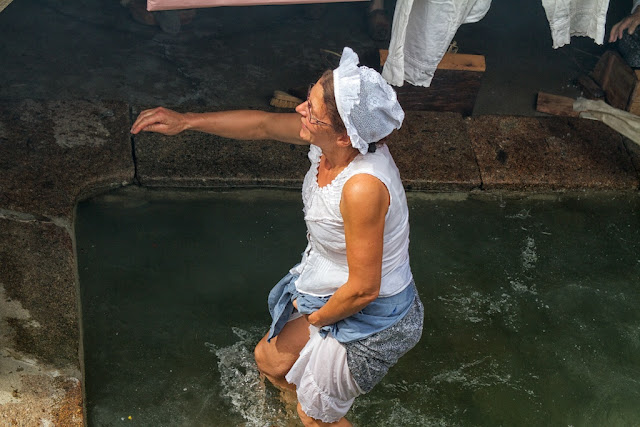 Shortly after this we headed back to the car park and set off to our next destination.  Next time I'll post the car pictures from the town.
at September 16, 2013