When we arrived at the first hotel at Belle Vallee, just outside Domfront we were extremely tired.  We'd got up at around 3am and driven all the way down from West Yorkshire to Dover, missed the ferry to Calais so had to wait for 3 hours for the next one.  Then we sped along the motorway in Northern France to Rouen, where we got lost as usual, even with the sat. nav.  Finally we headed South West to Domfront to arrive at the hotel around 6pm.

We could have had a meal at the Chambres de Hote if we had booked before we set off but we hadn't.  The owners Victoria and Richard were very nice and were going to try and book us a table somewhere in the town, but we were to tired to go back out and decided to finish the remains of the food we had brought with us (crisps, fruit and biscuits).  Victoria said she could knock up a salad from whatever she had in the kitchen if we wanted and we said that would be amazing.

We decided to have a bath in our room before any food as we were pretty hot and sweaty so Lynne went first. Victoria had taken up a glass of wine for Lynne while I sat outside in the garden waiting for my turn.  After we'd got changed we sat back outside in the garden with more wine and then the food arrived.  There was a good selection of cold meat and cheese with a little bit of salad and then a big piece of banana cake for dessert.

Here's a view of the garden from our bedroom window.  It was nicely in the shade for our evening meal and a brilliant place to relax at the end of a long day.  I can wholeheartedly recommend the Belle Vallee near Domfront if you ever want to visit that area of France.  The little lane down to the house is a bit rough and easy to miss from the road, but once you get there the place is lovely and the owners are brilliant. 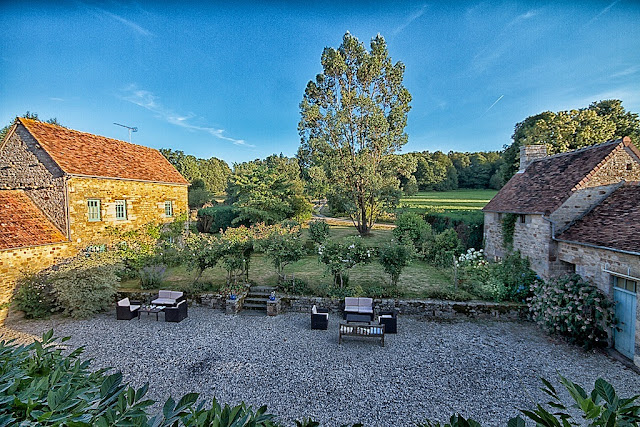 On the first full day of our holiday in France we visited the Domfront in the morning before getting ready to go somewhere else in the afternoon (see next post when it's written).  We found a car park near the centre of the town and the first photo I took was of this war memorial. The green/grey finish on the soldier made it look as if it was made out of plastic. 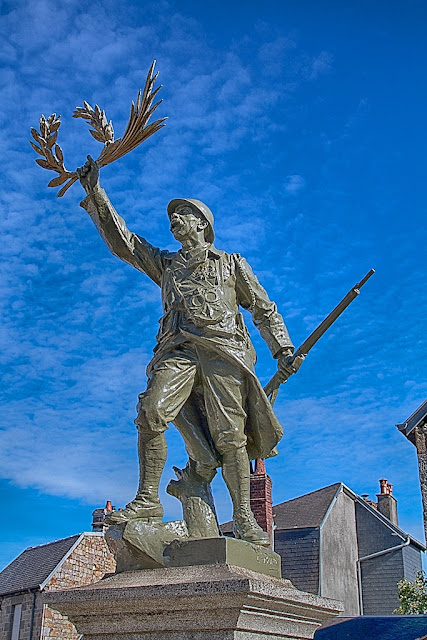 We followed the signposts to the chateau and the next photo is part of the town wall with the remains of the chateau in the background. 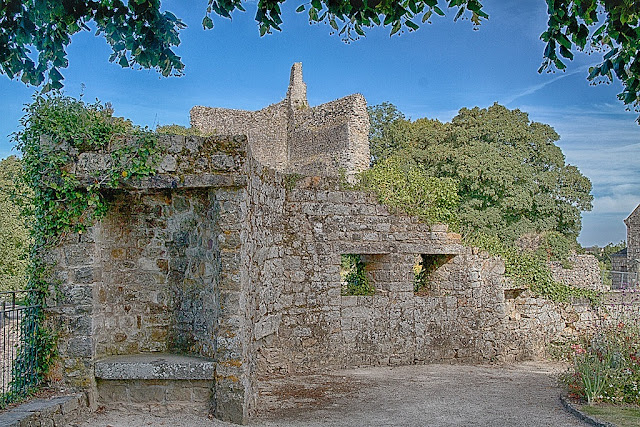 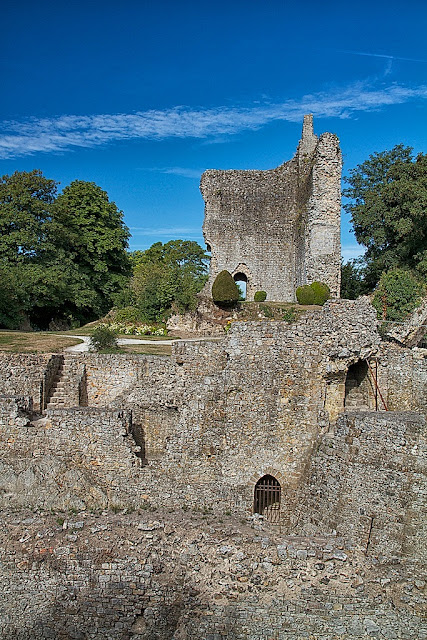 On the chateau site are the remains of this old church which is currently fenced off where they appear to be doing some archaeological digging. 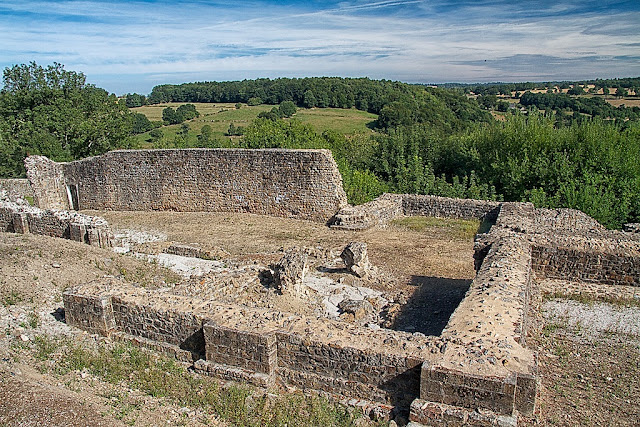 Most of the chateau is piles of stone here and there and some of them are propped up to stop them falling over any more.  This part is the biggest chunk of the remains which gives some indication of how big the chateau would have been. 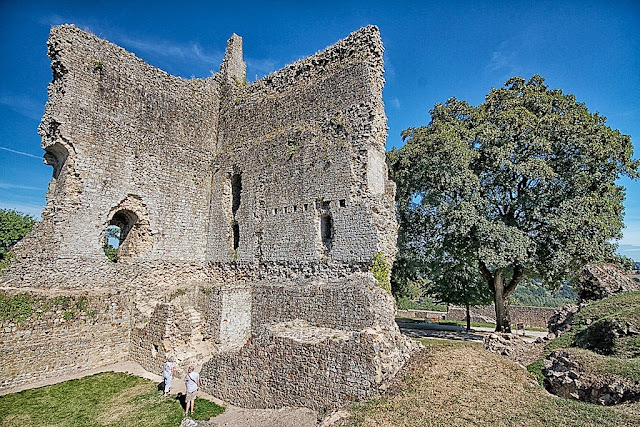 Around the site some of the outer walls are still standing and they go a long way down to the flat land below.  The walls between the chateau an the town are relatively small and there are some underground passages that can be walked through.  The next shot is looking back towards the town and shows the bridge over the road and the building which is the tourist information office.  Inside the tourist information office is a display and models of how the chateau would have looked before it was destroyed (probably by those pesky Englishmen, so we didn't ask). 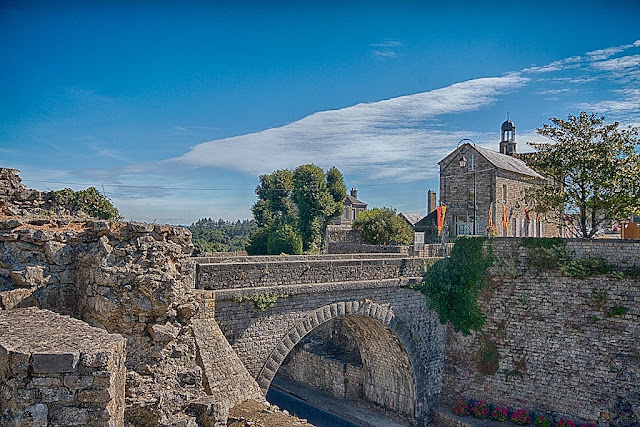 We climbed down the precarious path down the chateau walls towards the town to get this shot looking along the wall towards the bridge.  When we went around the corner behind us there was a much easier path down to here. 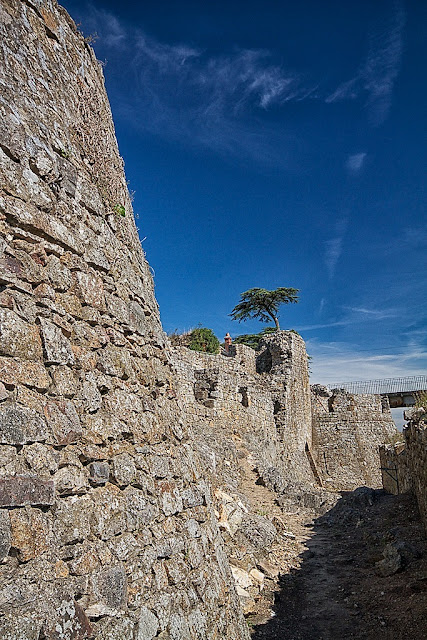 Back into the town and this building with the flags outside is the town hall. 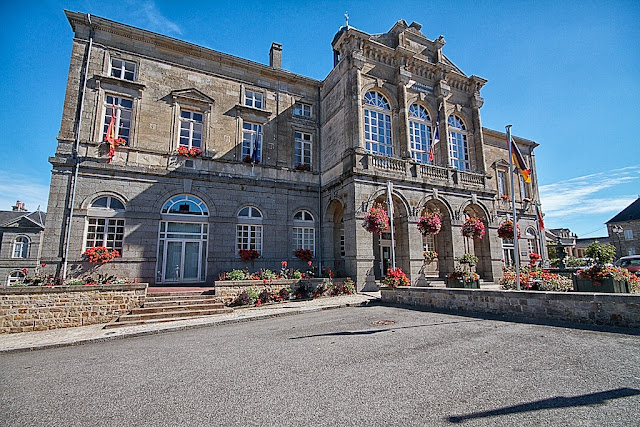 In the centre of the town was a small square with shops around it and "Le Bistrot St. Julien".  We stopped for a cold drink as it was getting quite hot as we got towards the middle of the day. 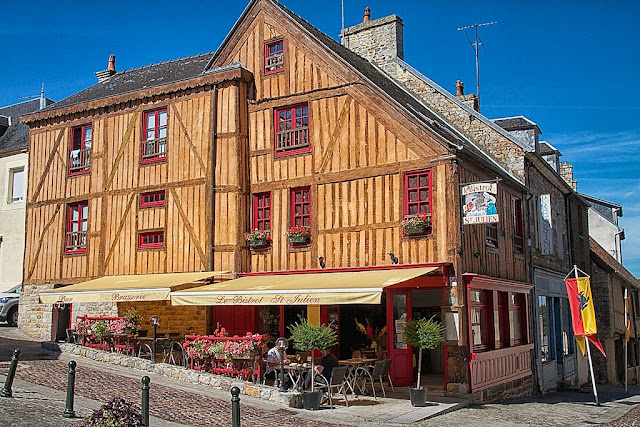 Around the town there were a number of shops which had been closed for some time.  Quite a few of them, like this one in the next photo, had posters in the window which at first glance look as though they are still open. 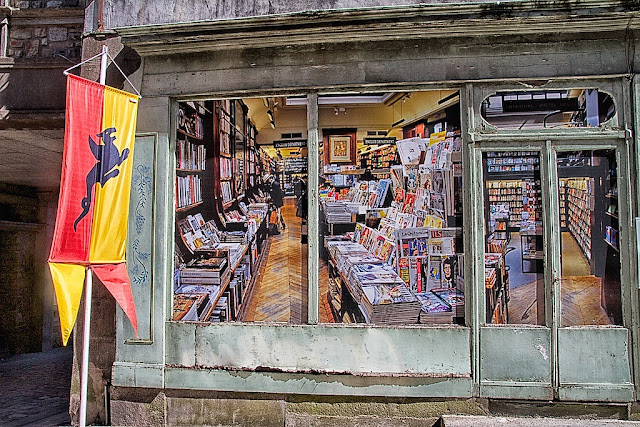 Heres another cafe/restaurant withe the church spire behind. 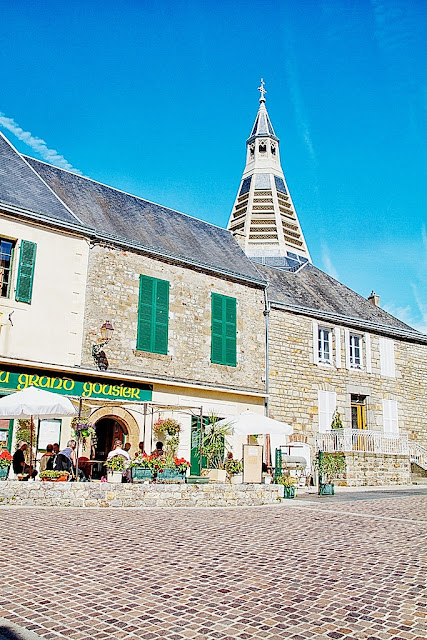 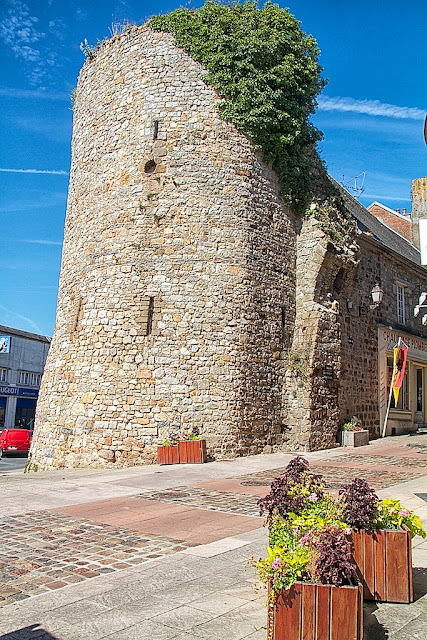 Further around the edge of the town were some more towers and sections of wall. 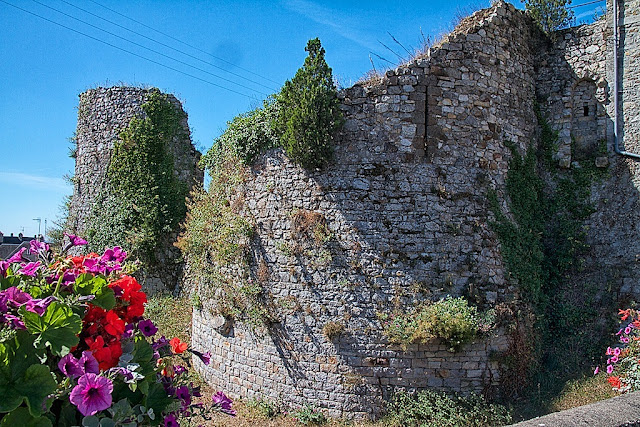 Back into the centre of the town is this rather unusual looking church which was built in the 1920's using concrete blocks.  Apparently it has some exciting mosaics inside but we didn't find an open door so missed them. 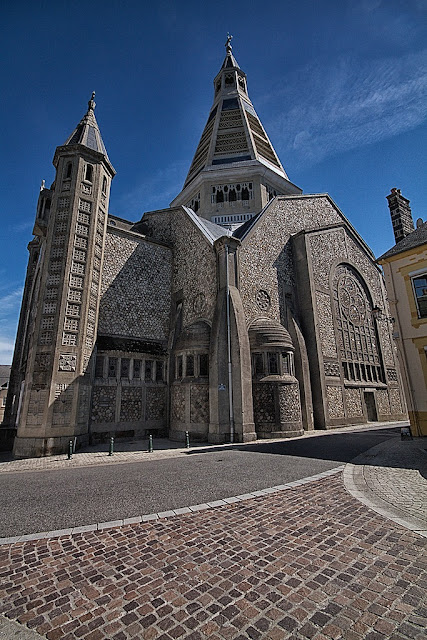 Late in the morning we set off to our next visit of the day at Saint-Fraimbault which will be in the next post.
at September 04, 2013