I'm still testing out my new fisheye lens and a couple of weeks ago I had some spare time to walk around Holmfirth while my wife was having her hair done.  It wasn't actually raining but everywhere was still pretty damp.  This first shot was taken at the riverside path which is over the wall from the Co-op car park.  It doesn't show off the distortion from the lens very much but it's a reasonable shot. 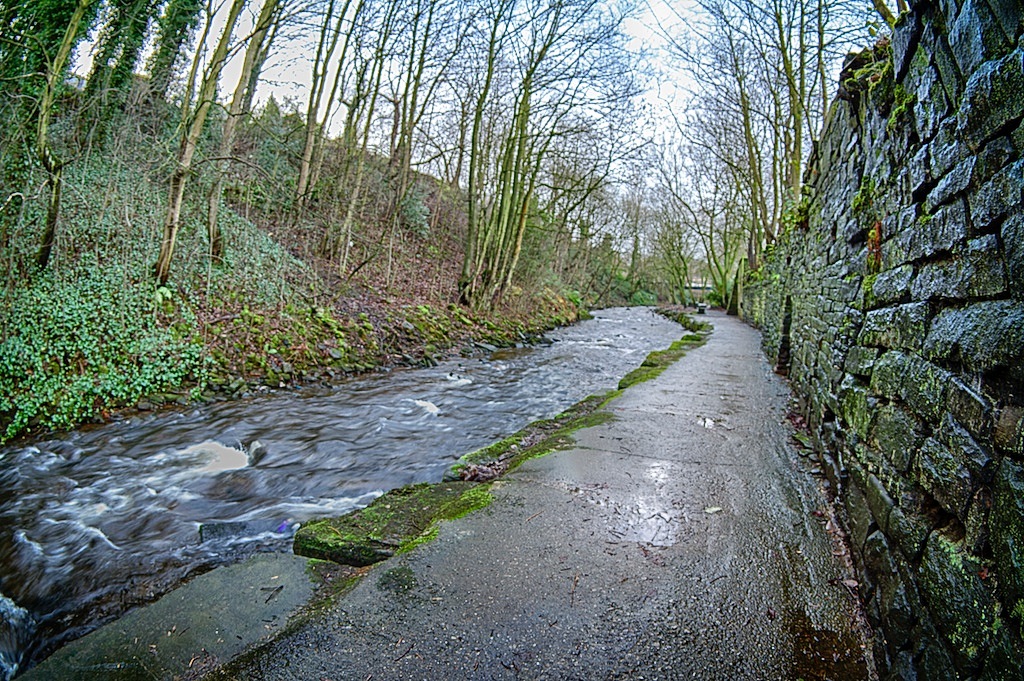 Up from the river is a little park behind the Post Office building.  I found it quite interesting to see the lined pattern on the floor under the benches where the rain has dropped through the seats.  One of the attributes of the fisheye lens is a very short close focusing distance which coupled with the very wide angle of view allows the camera to be placed very close to objects and still take in the whole scene.  The front of my lens was only a few inches from the metal frame of the bench for this photo. 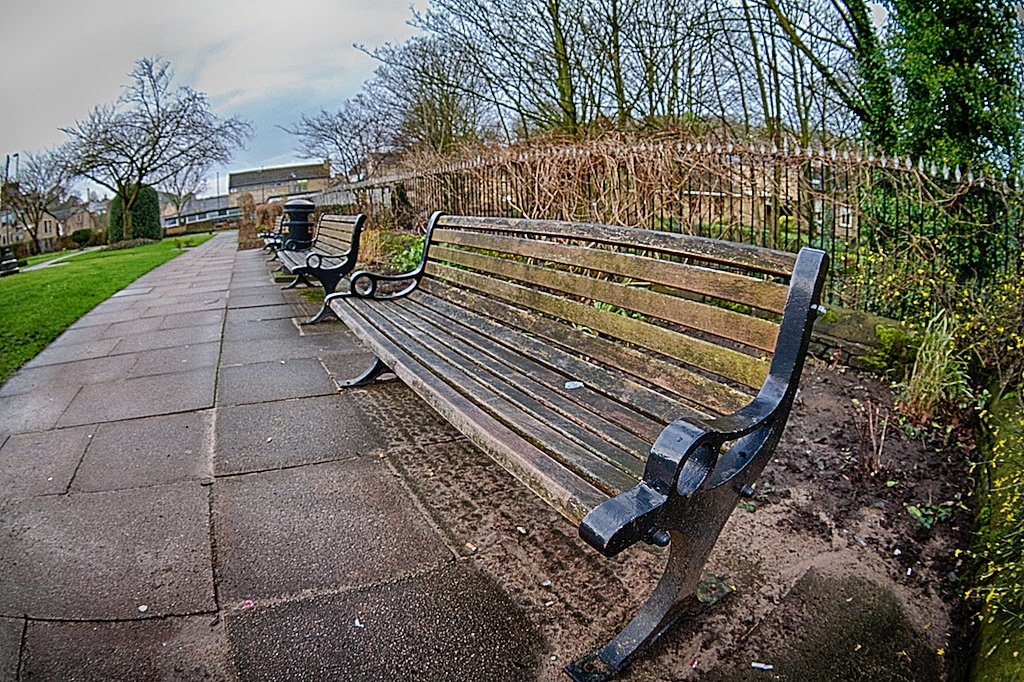 This building is the Picturedrome which was originally a cinema but is now mainly used as a music venue.  Sometimes it is used as a cinema and the bar at the rear of the auditorium and the tiny seating area makes it a bit like watching films at home.  It is a wonderfully intimate music venue where the audience is stood a few feet from the stage which is just a couple of feet high.  The venue attract lots of the old bands and artists plus lots of tribute acts and local artists so has a lot of appeal to all music tastes.  I love the way the fisheye lens has exaggerated curve in the river and brought a large amount of Holmfirth into the picture. Further up the river are the rear view of the mill shop, some office space and the market hall (which was previously a car showroom).  Also the main view of "The Rug Shop" which is across a little bridge across the river.  The lens distortion is highlighted quite well in the red brick building on the left. 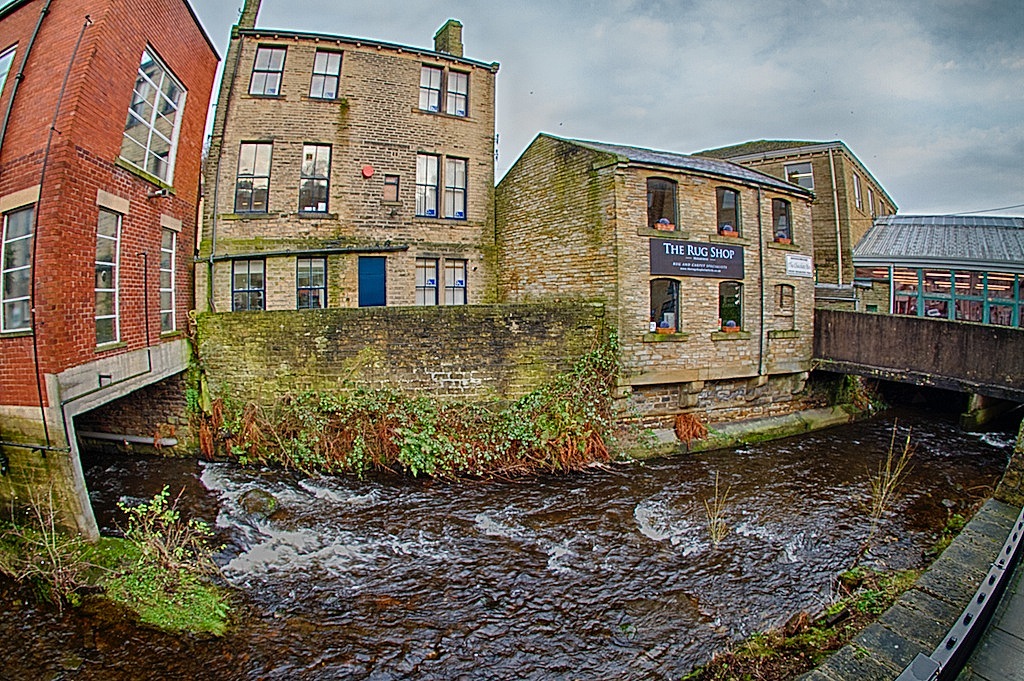 After I had my hair cut I crossed the main road in Holmfirth and went up into Victoria Park and was amazed to see blue in the sky between the clouds. As with the picture of the benches in the other park area, I was very close to the railing when I took this shot. 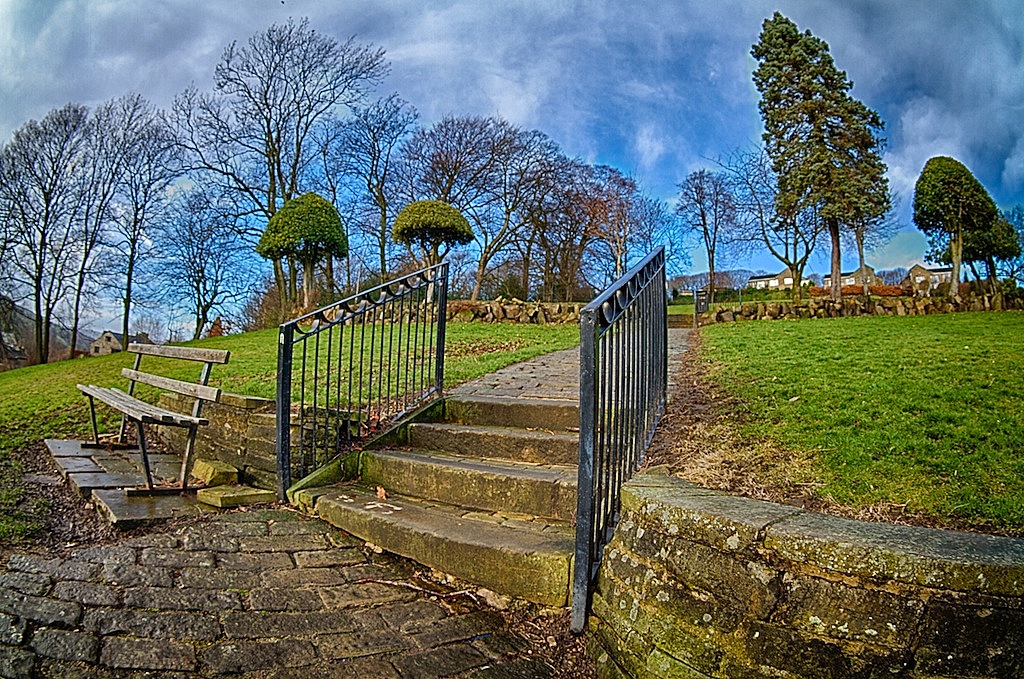 This is a gift of a subject for a fisheye lens with the circular pavers, the rounded metal benches and the curved railings around.  My main problem when taking the photo was trying to make sure that I didn't get my feet in the picture because the camera was pointing downwards quite a lot. 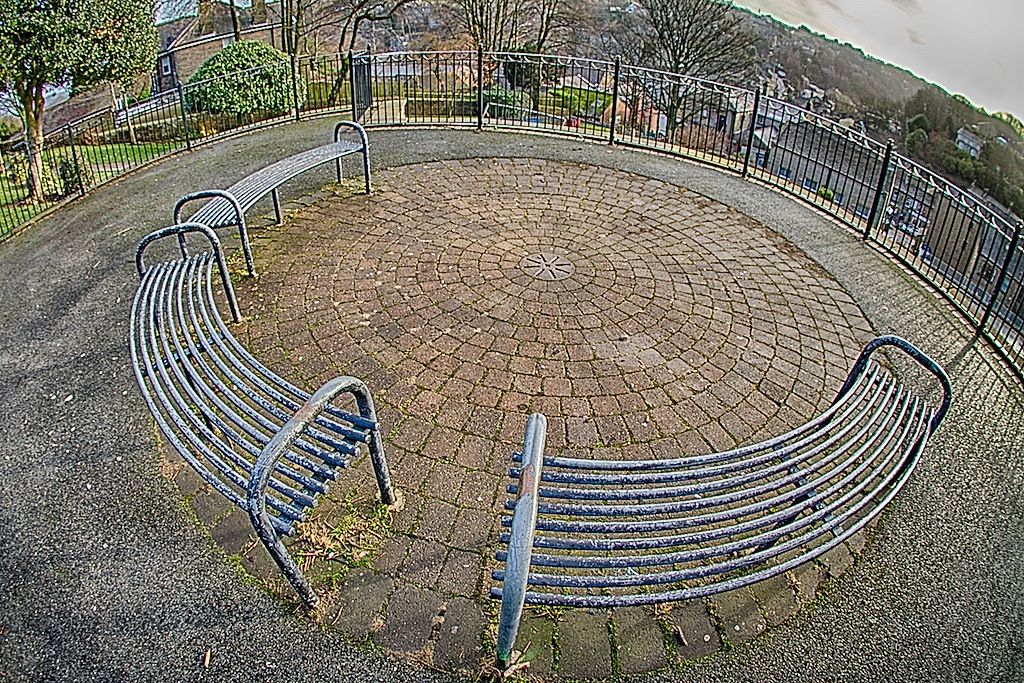 After leaving Victoria Park I walked up the hill above Holmfirth for this final picture.  At the top of the hill the land flattens out and there are a few fields here stretching towards Upperthong. The clouds were moving away to the horizon and leaving a big area of blue sky above me.  I pointed the camera upwards to take in the whole of the old airplane vapour trail which looks to be radiating out from the sun behind the clouds.  The lens distortion has made the horizon wrap upwards at the edges and the yellow sun has lit the wet grass up in a beautiful way.  The white tractor and gate make very good foreground subjects to the picture.  Taking photos directly into the sun can be a bit problematic but I think that this was the best photo of the morning. 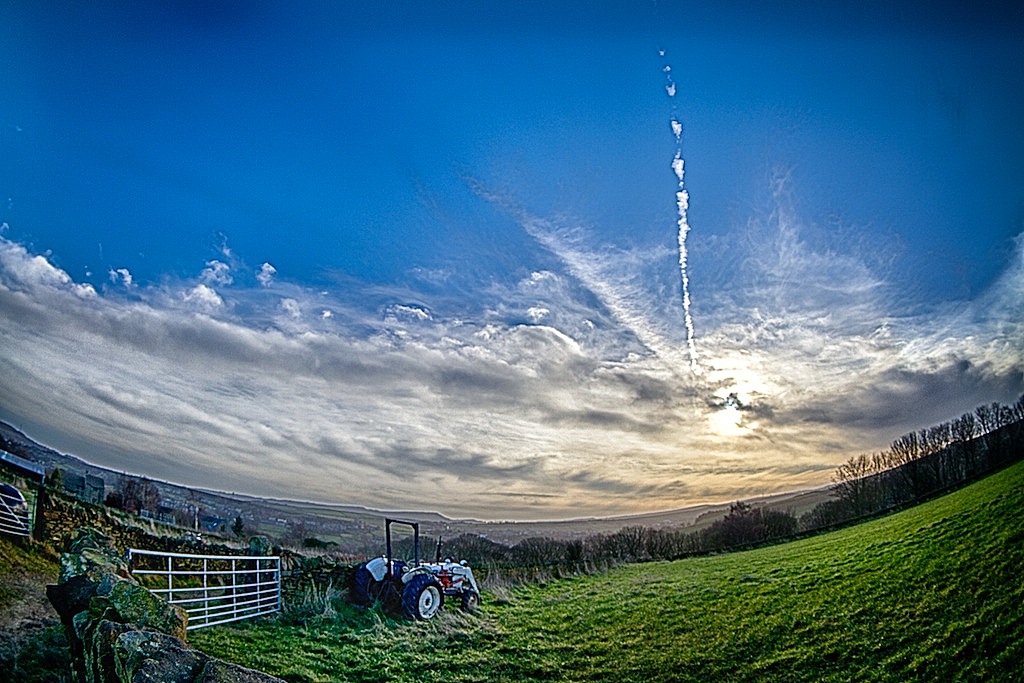 I don't have a batch of photos for the next post as yet.  I may have to look back through last year to find something if the weather doesn't do something interesting soon.  Maybe some photos from France may encourage the sun to come out.
at February 06, 2014