Flowers in the Rain

The weather is still very wet and windy but last Monday the forecast promised us a full day without rain and even some sunshine.  My wife had also booked the day as holiday and it seemed too good to be true so we planned to get out for the day and take full advantage of the respite in the weather.  The ground is still very wet so we decided to head for a National Trust property rather than risk going for a walk over open land.  Dunham Massey or Tatton Park seemed to be ideal because there are paths and chance to wander around a deer park to get some photos of the flora and fauna.

We packed our wellingtons because we knew it would be wet underfoot and set off to Tatton Park.  The sun was in my eyes so I put on my sunglasses for the start of the journey, but as we went over the Pennines towards Greenfield we could see black clouds on the horizon.  I had checked the weather forecast for Tatton Park and it was still showing zero precipitation for the whole day so I assumed that the clouds would blow away before we got there.  As we got closer the clouds hadn't moved and arriving at Tatton Park we found it wasn't open on Mondays at this time of year.  It wasn't looking good but we headed for Dunham Massey which wasn't far away and hoped that it wasn't closed too.

As we arrived at Dunham Massey the rain began and it carried on the whole time we were there.  Occasionally it looked as if it might brighten up, but then it didn't.  We walked around the deer park for a while and then went to have a look at the winter garden where I took all of the photos in this post.

The first flowers we saw where these little pink ones which were well spread out in the border.  I wanted to get very low for the photo and had to line up the shot using the LED screen on the camera and rely on the camera to focus on the flowers. 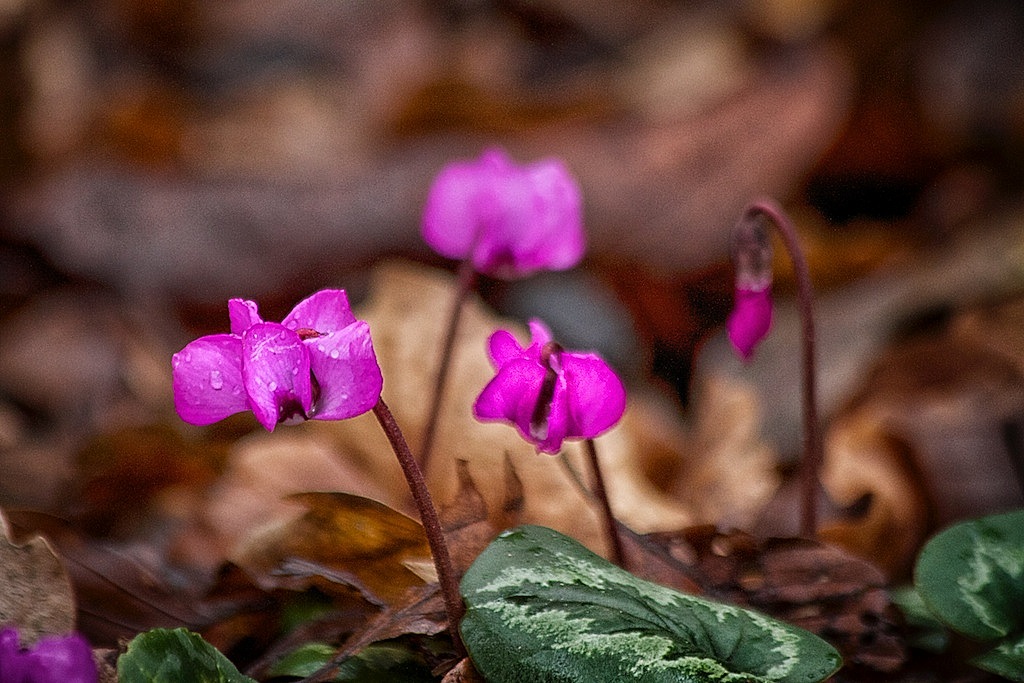 I used a fairly narrow depth of field to isolate these little blossoms from the background in this next photo. 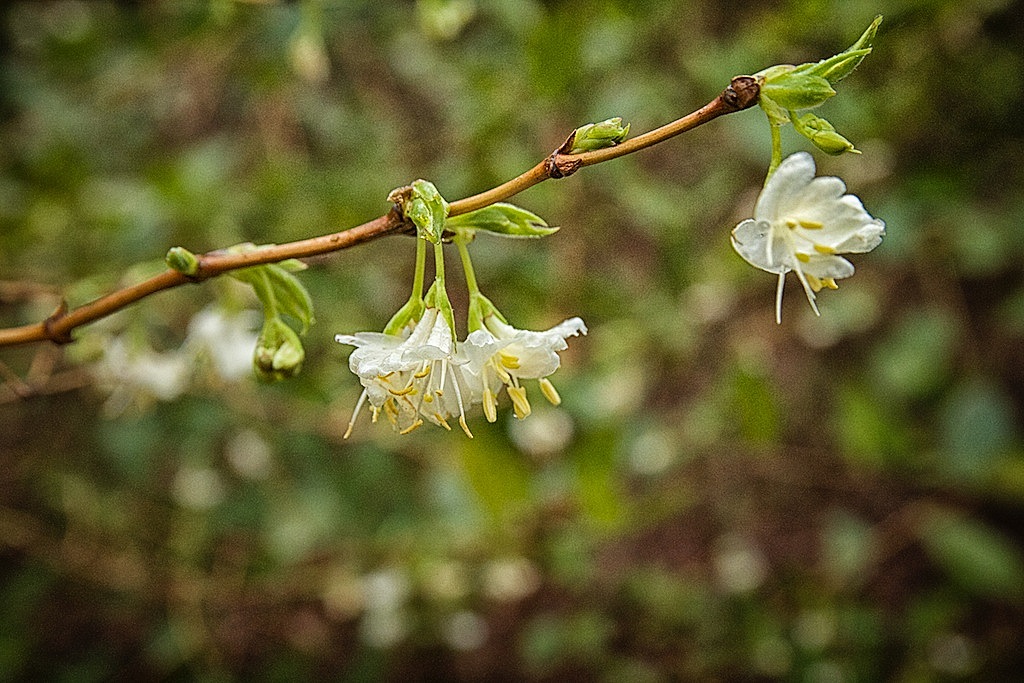 There was a few big patches of snowdrops in the garden and this first photo was taken low and close up to one clump. 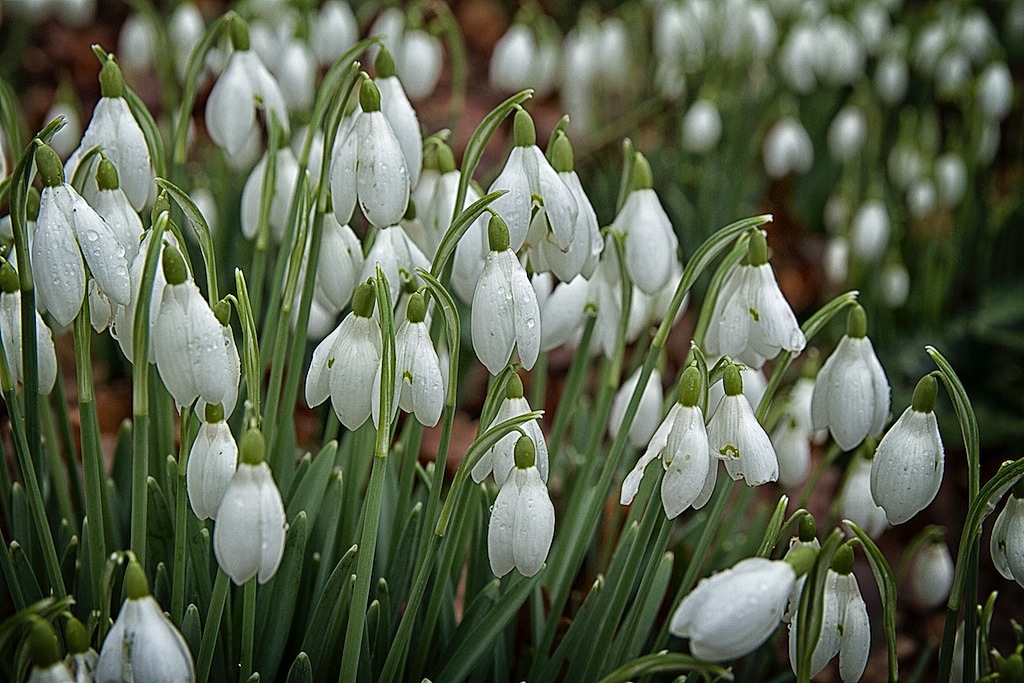 In this second photo I made the camera focus on the snowdrops in the middle distance so that the nearer flowers were blurred out.  I also quite like the white barked trees in the background. 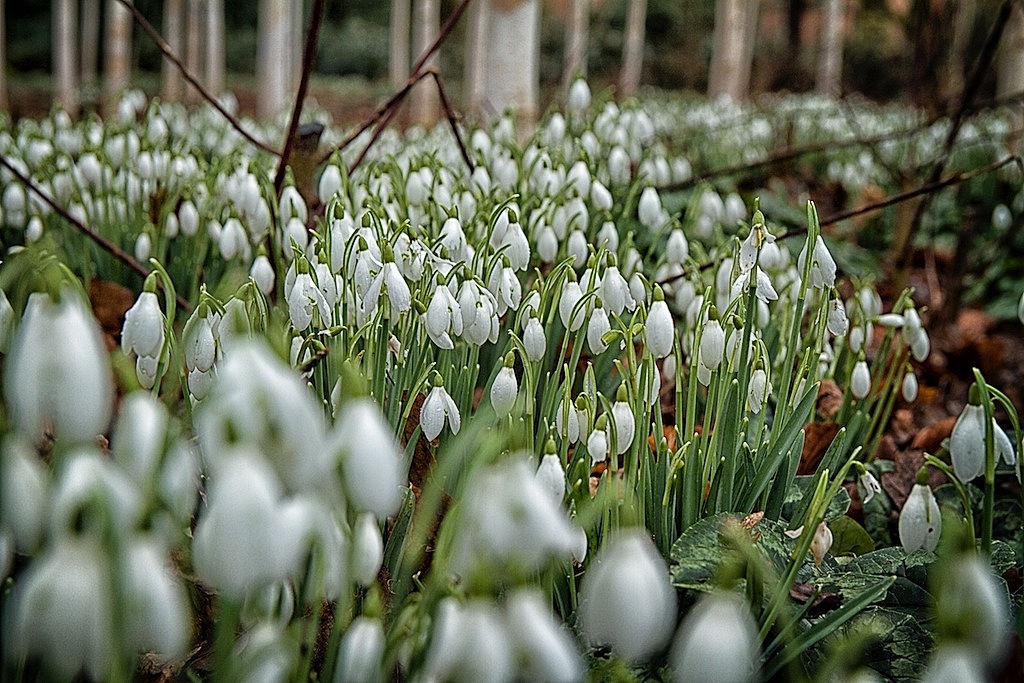 In this next photo, from near to where the last photo was taken, I have moved back to get the foreground flowers in focus. 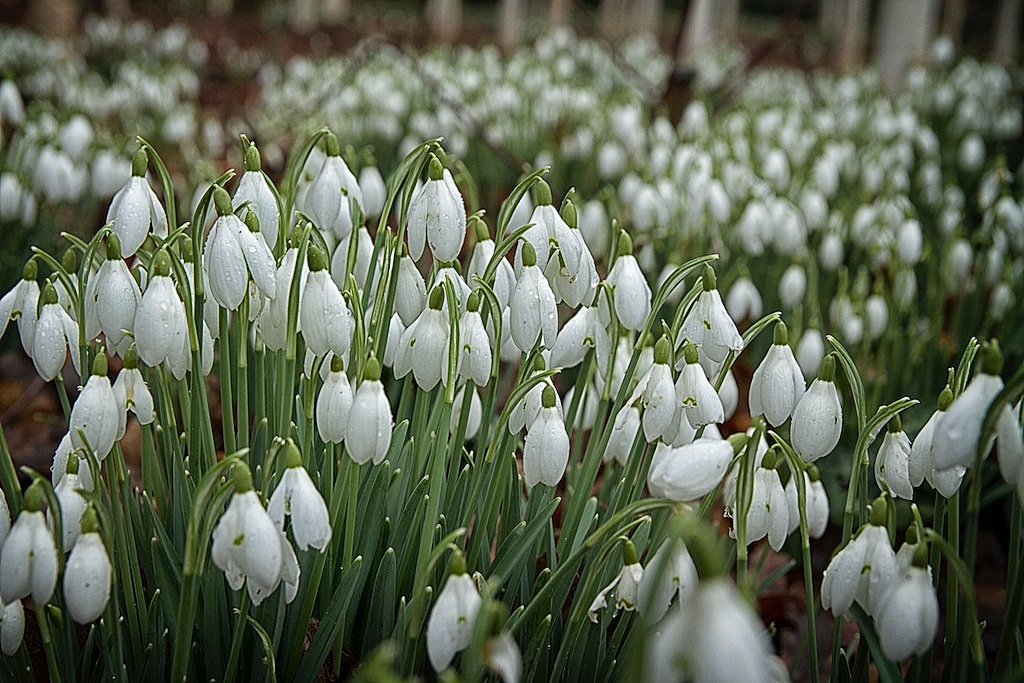 Here are some red blossom on what I think is a type of pieris bush. 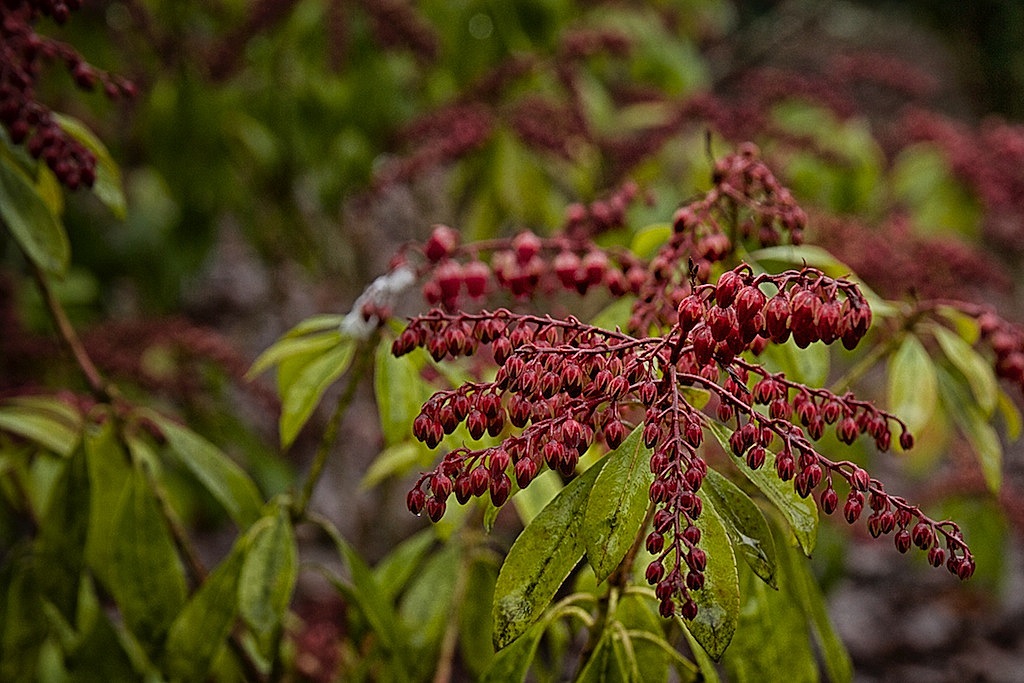 Here is another photo taken very low down of some yellow flowers which were growing between the snowdrops. 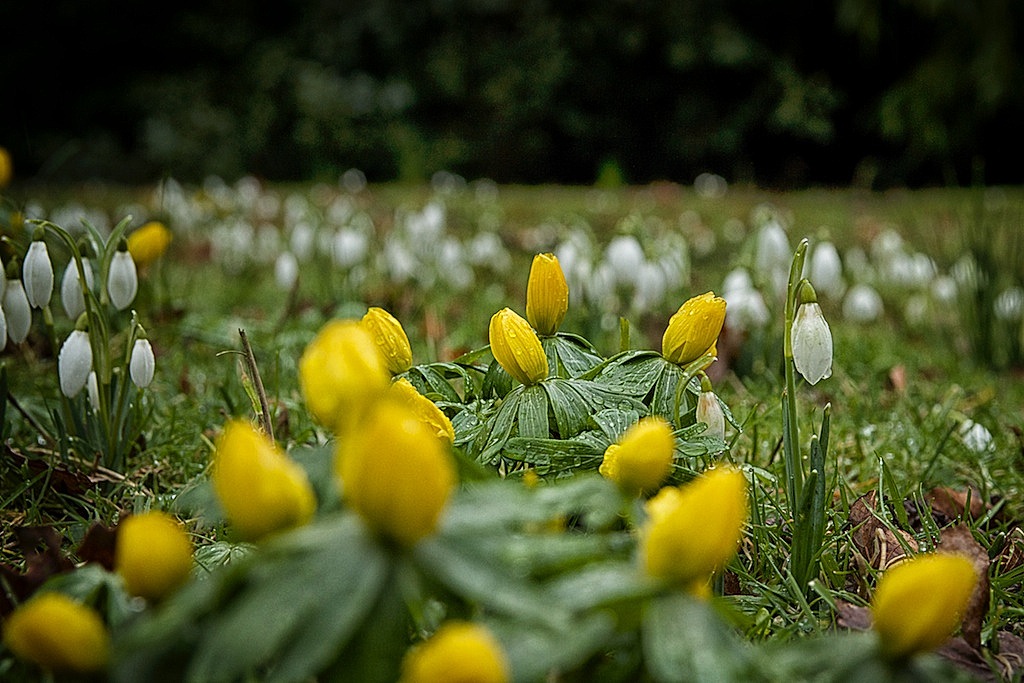 In the next photo I lifted the camera u a little and pointed it more downwards so that the foreground plant is in focus. 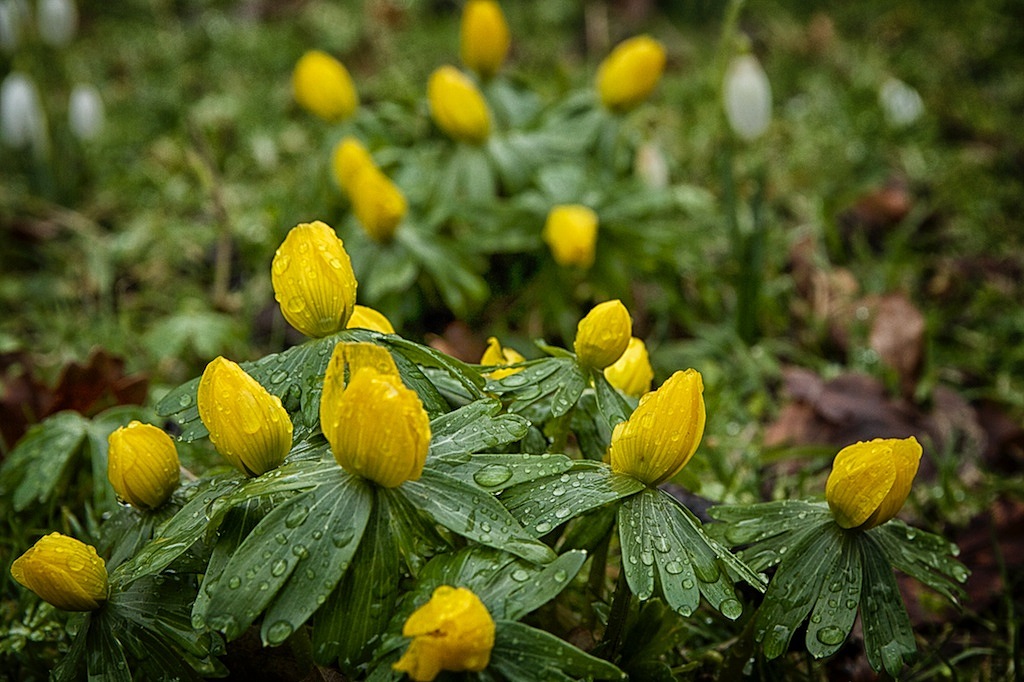 Here are some little purple iris which were at the edge of one of the daffodil beds.  The daffodils haven't flowered yet but there was a lot of stalks and leaves around the garden. 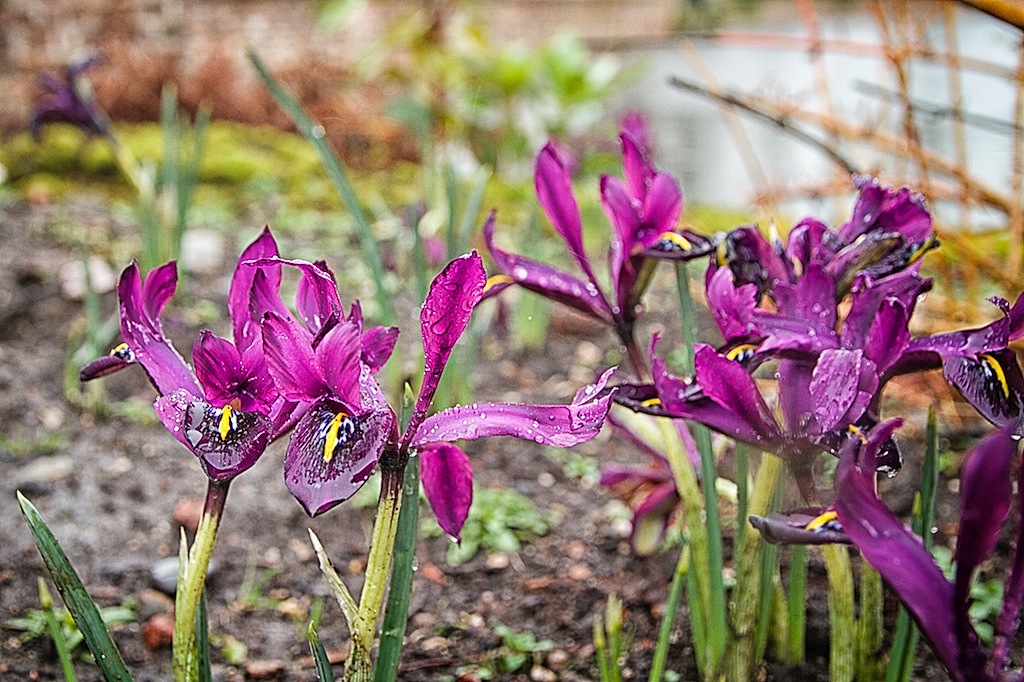 These little blue iris were sheltering under a pieris bush and it was quite dark where they were.  I had to boost the light quite a lot to make them look as if they were in a lighter area. 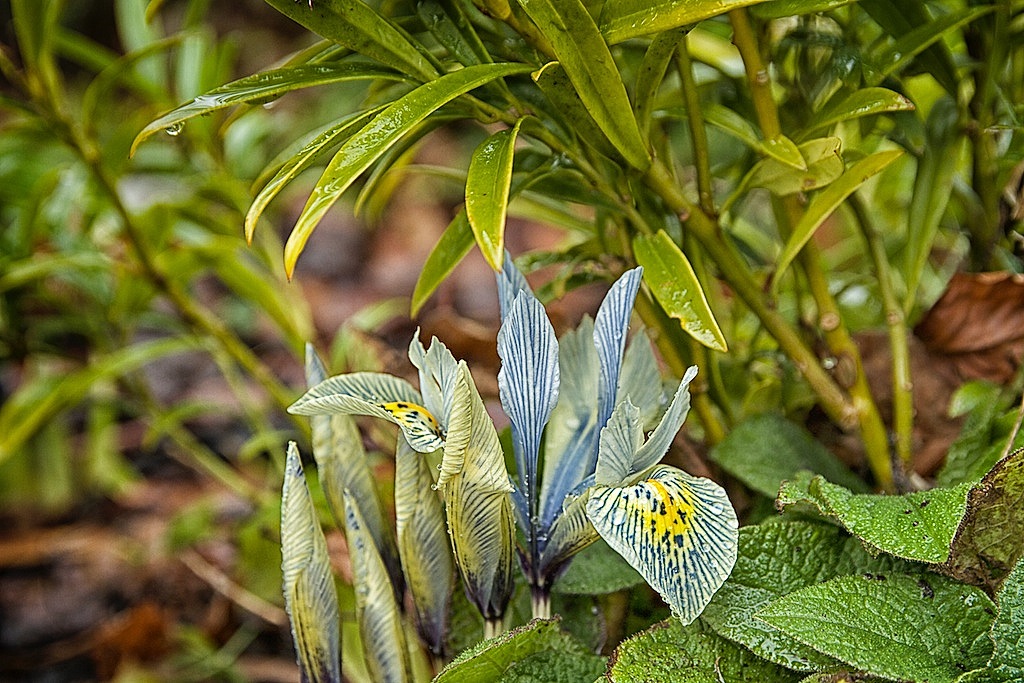 In the next post I might use some of the other photos which I took at Dunham Massey.  The thing that really annoyed me about the day was that within 15 minutes of leaving the park on the way home there was little sign of the rain that we had seen while I was trying to take photos.  When we got home it didn't look as though it had rained at all.
at February 15, 2014