Beaumont Park was opened in 1883 and was the first public park in Huddersfield. The 20 acre woodland site was a gift to the Huddersfield Corporation from the wealthy landowner Henry Frederick Beaumont. Most of the park is on a very steep hillside and there are many paths and stairs that weave around the site. I have taken many photos of the magnificent stonework that is scattered around the park which include several bridges and areas for viewing the scenery across the valley.

I had dropped my wife's car off to have the air conditioning recharged as it hadn't been coping to well with the recent hot weather. I was second in line at the garage so it was going to be a couple of hours. In the end it was four hours before I picked the car back up because they had run out of gas and had to fetch more from Bradford. Anyhow I had my camera bag in the car as I had intended going on a photo trip after the car was done but instead I had the morning to take photos around the area. So I ended up in Beaumont Park.

I had been here several times before and so I was looking for something different to photograph. As I walked along the main path I noticed the water feature which appears to have had a recent refurbish and a fountain added (or repaired as I don't remember seeing it working before). This first image is a tonemapped HDR where I have held back on the processing so that it doesn't have that usual surreal appearance but looks quite normal. As it was quite sunny the fountain and the rocks were quite bright so in a normal shot the arches in the background were in deep shadow, whereas this HDR image shows quite a bit of detail. 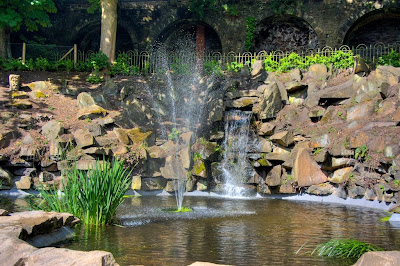 I thought that the water droplets in the fountain would be really good for making some more Lensbaby images with the creative apertures so I swapped over to the Lensbaby and looked around for a good foreground subject. There were some red flowers in a bed to the right of the water feature but the shots they I took here just didn't turn out right. Then there was this flower stem which enabled me to get both the fountain and the waterfall sparkling in the background.
I took a few more shots which also didn't turn out so well and then moved on. I might have to go back and try again because I felt there was more potential here to make some better images. 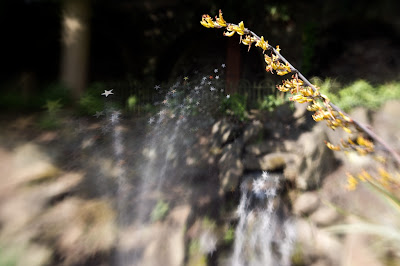 I walked around the park a little more and then saw this staircase which I thought would make a good architectural shot. There were a couple of Crows and a Jay on the stairs which flew off as I approached. As I got closer I noticed that there where piles of nuts on each of the flat top stones in the staircase which ust be why the birds had been there. 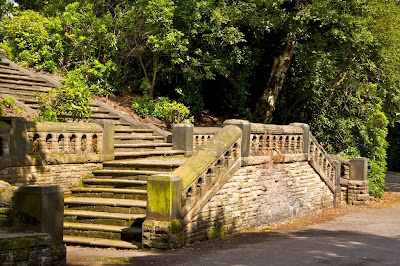 As I walked past the Jay came back and sat next to one of the piles of nuts. I quietly put on my telephoto zoom lens and tuned around to take a few quick shots of the Jay before it flew off again. 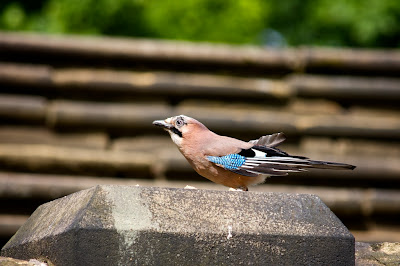 I walked a little further on before I realised that I was heading back to the water feature so I turned around to head back again and find a different path. As I got close to the staircase again I saw that there was a couple of squirels after the piles of nuts now along with a couple of Jays and a crow. I quickly took a couple of shots of one of the squirels but they both had there back to me. I moved a little closer and the birds flew off (as usual) and one of the squirels disappeared. The other one seemed quite placid and I slowly walked in an arc around to a position where the squirel was facing me. It was stood up and allowed me to get close enough fo this shot. 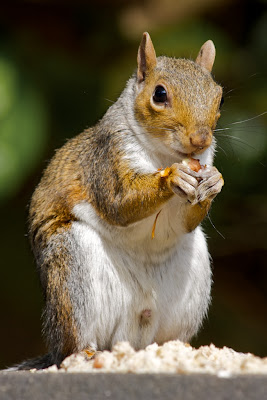 As I moved a little closer it decide to head up the side of the staircase but it had taken a nut with it and had stopped to have a bit of a nibble. 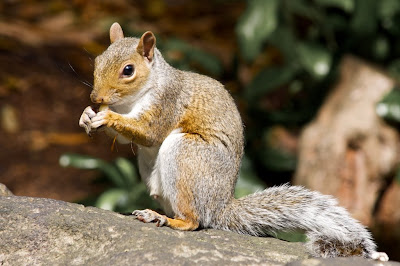 When it had finished the nut it moved a little further up the wall but stopped for me to take this final portrait of it before it headed back into the woods. 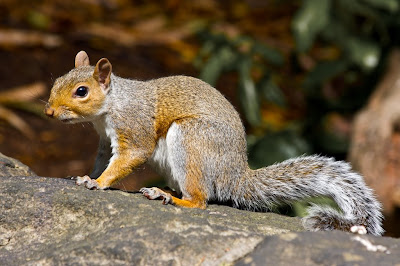