So it doesn't look like I'm going to get chance to go out on a photo taking trip again this weekend. My youngest daughter is getting the keys to her rented house on Saturday and so I'll be busy taking stuff over and assembling flat pack furniture. Although it does mean we'll be able to get into the dining room again.

Following the success of the ducks (as seen in the previous entry) I've been making some more of my own creative apertures. I had thought of so many ideas and sketched them out but now I need to edit them down as I've only have 5 blanks. The results of the aperture making endeavours has been a bit inconsistent but overall I'm fairly happy. I think the trick is to keep the shapes simple but distinctive.

This first image is another from my study window where I'm using a tree shaped aperture. My daughter thought it was a mushroom (which was one of my other sketches) but I think it's quite clearly a tree. A mushroom would be much squatter with a thicker trunk and no roots. Although there are many varieties of mushroom so maybe I'll let her off. 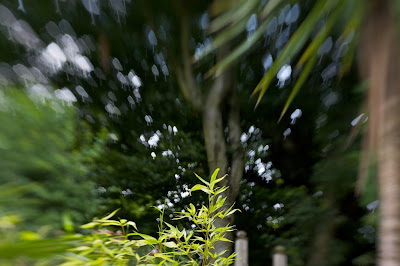 My next two attempts were a butterfly and a flower. I had real issues with both of these and I think it's just my inability to cut things symetrical or with regular shapes. I finally got the butterfly almost as I wanted but after keep cutting more and more bits of the aperture ring is now pretty flimsy. It was the same story with the flower and I'm not at all happy with the result which is why I haven't used it any of these images. The next photo is a butterfly one which isn't brilliant but I'll try to get a few more before the thing falls appart. 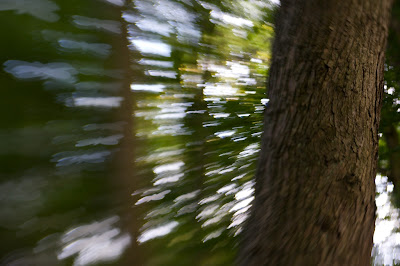 Tonight I've been for a walk with Evey dog and I used the tree (mushroom) aperture for this image. It was a bit dingey so I didn't manage to get Evey anywhere near in focus but I just like the different blues, pinks and oranges from the sun going down in the background behind the trees. I think this is an idea that I can use again and maybe make some better pictures. 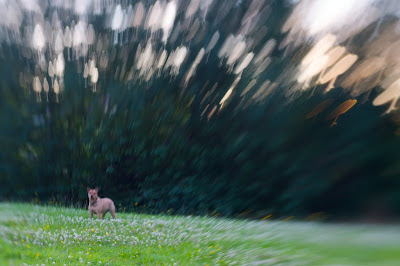 The next one was a few minutes later with a closer portrait of Evey. The problem is that quite often when she's out with me when I'm taking shots I'm always getting her to move out of the shot. So when I actually want to make an image of her she has a tendency to run off. The focus here is just slightly off to the right so her nose is a bit soft but again the colours of the lights coming through the trees are quite nice. 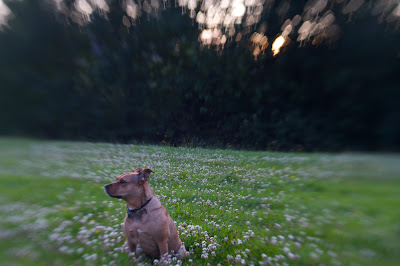 In the final shot I was trying to get these rowan berries to take on the tree shape. I think there maybe just a hint of it on the far right of the image but I think the problem is that the berries aren't single points of lightness and therefore making the bokeh far too blurred. I need to find a tree with with single berries or flowers. More experimenting is definitely required. 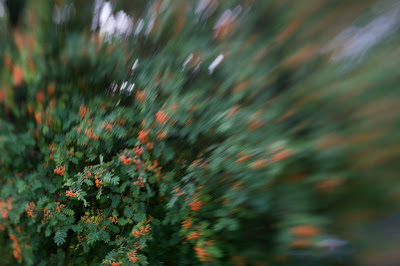 So now I've just one more blank left. After going to see the new Harry Potter film on Tuesday night I was thinking maybe the shape of his scar? I'll have to order some more blank aperture rings because I've still got so many more ideas for shapes. OK, where's my link to Amazon?
at July 23, 2009