As promised, Curlew and Lapwing images

It's not a good morning so I've packed a cagoule and set off in search of more birds to photograph. There is an old road that goes from above Harden Moss down to Meltham that I've never been along before so I thought I'd scout it out. I've made some images of Curlew and Lapwing near here and I was hoping to see some today so I could practice my technique. I had brought my monopod to try and cut down on the camera shake in the shots and hopefully capture some reasonable images.

This first image is the start of the old road and shows it climbing gradually to the top of the moor. Many of the old roads in this area have never been properly surfaced and are mainly used by farm vehicles and horses. This one is in quite good condition and while I was here a few cross country cyclists went by. This is fairly obviously a tonemapped HDR which has made the sky look to have much more interest than it actually had. The image suffers a bit with haloing along the horizon which is something that the HDR software tends to add and I haven't found a good way to get rid of it as yet. 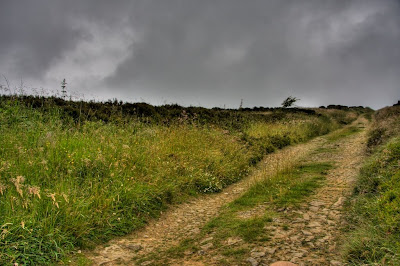 On the verges of the road there were lots of spider webs covered with the water droplets from the earlier fog. This is also a tonemapped HDR image of a web in the grass and the water makes it look like a miniature chandelier. 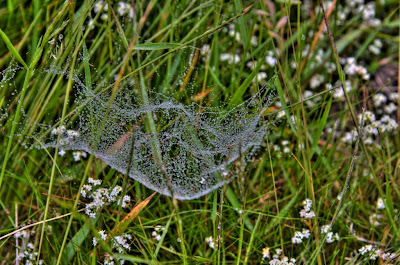 The grass was also covered in the dew and this next image shows a single grass seed head. The grass was waving about a bit in the light breeze which made it impossible to get a set of images to make into an HDR image. 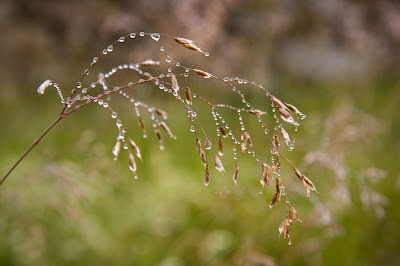 Then the first Curlew flew over and I shot a first set of images which turned out to be the best ones of the Curlews. The sun (not that you could see it) was behind me so the bird was quite well lit and I had remembered to overexpose the shot to stop the bird becoming a silhouette. The sky behind the bird was very bland and uninteresting but I was using today as a training mission. 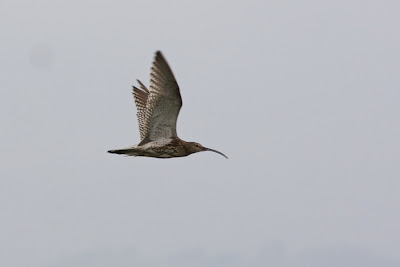 In a field next to the road there was a couple of Lapwing walking around among the sheep. I just managed to capture this one setting off to fly about. It's a pity that it was facing away from me otherwise this would have been a better shot. 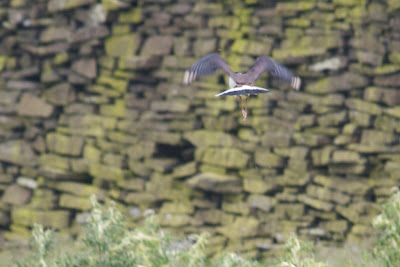 I left the road at the brow of the hill and headed towards an old quarry that I could see across a couple of fields. I thought there might be some more photo opportunities around there. On the way the Curlew had come around again and this time it was making quite a lot of noise. This image shows it with its mouth wide open as it squawked. 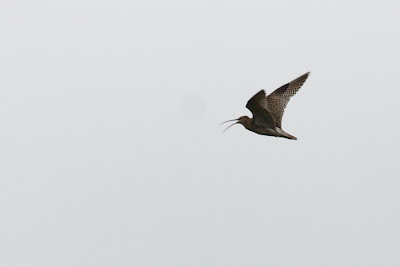 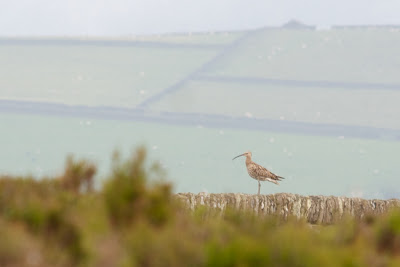 When we reached the quarry (Evey dog was with me as usual) there was another pair of Lapwing flying around and swooping about. I'm not sure if they were trying to scare Evey away but a few times they got quite close to her. As it was still quite dull I put the ISO setting on my camera up to 800 so I could still use a fast shutter speed as the birds flew in front of the quarry walls. Unfortunately my camera insisted on focusing on the quarry rather than the birds so I ended up with several nice pictures of the quarry with a dark blur in front of it.

Eventually go a few decent shots of a Lapwing quite close but up in the sky. As I still had the ISO set to 800 (rather than 200 or 100) the shutter speed was a tiny 1/6400 of a second which got rid of any motion blur but left a lot of noise in the dark areas of the image. I've tried cleaning it up a bit so it doesn't look too bad now. I have been looking at this image for a few days now and I really like this bird. I love the way its wings are stretched out so wide and the angle that it was at when I took the shot. I can see it is calling with its mouth open and at full screen on my computer monitor it's possible to see its tiny tongue. It has a splendid crest on the back of its head and even a hint of a catchlight in its eye. 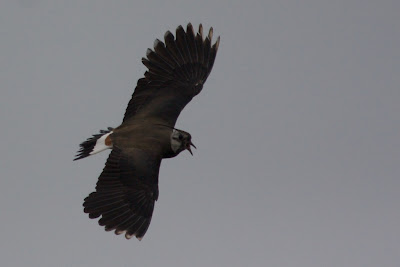 I heard another bird calling while we were in the quarry and at first I couldn't see where it was coming from. I walked towards a little pond in the quarry in the direction of the noise and then suddenly spotted this little Common Sandpiper running across the mud. 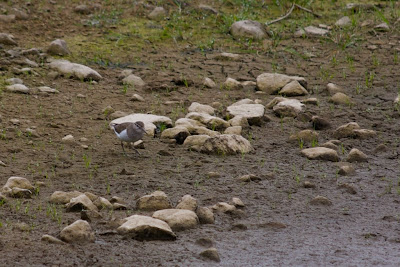 After a while the Sandpiper settled down in the weeds near the pond where I took this second shot. The bird is a little bit obscured by the weeds but I still like the image. 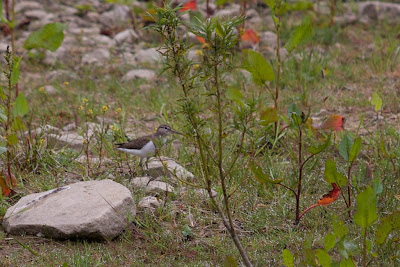 I did take a lot more shots of the birds than I've mentioned here but I'm still not satisfied with how they are looking. I will return to this spot again when the weather is better and maybe if I don' have a dog with me and I sit quietly and hide, the birds may come a bit closer. I'm still not thinking that I'll specialise is bird or nature photography but I'd still like to make some better shots.
at July 01, 2009