The Broken Lens, the Owl and the Baby Rabbit

I was still a bit down about not having the opportunity to get out and have a walk and take some photos for the weekend in a row so on Friday evening I packed up my kit, got the dog and set off to Black Hill. It was a fine evening and the few clouds from earlier where parting to become a clearing sky so I thought I might get some nice sunset photos from high on the Pennines. It's a good hours walk from the road to Black Hill along the Pennine Way so we set off at a brisk pace. After the second stream crossing there were some nice fluffy clouds in the sky so I got my camera out to take a few quick snaps before starting the big ascent.

I put the camera to my eye and tried to move the zoom to frame the shot but it was stuck. I'd noticed before it sometimes was a bit sticky but this time it would just not move past 24mm. I tried a bit more pressure but nothing. I removed the lens from the camera a noticed a rattling noise, shook the lens and sure enough it rattled some more. My first thoughts "Oh no, my main walkabout lens (17-85mm) is broken and I'm going on holiday in less than 3 weeks!!". My feeling of being a bit down turned into a deep depression in a matter of seconds.

There's no way I can get the lens sent away and repaired in less than 3 weeks what can I do? I fiddle about with it a bit more but a knew that the tell-tale rattle spelled disaster. I put the lens back on the camera a and took a couple of shots, so I know the auto focus and image stabilisation was still working but the reduced zoom from 17mm to 24mm severely limited the usefulness of the lens. I could rent a lens for the holiday but that's dead money. I have been thinking of upgrading this lens anyway but that is very expensive (the 24-70mm L lens has a recommended price around £1,050).

I felt very depressed and nearly turned around and just go back home and sulk. But I went on and took a couple more shots from my ex-lens before taking it off and putting on the 70-300mm from my bag. Not really a landscape lens but I also had my 50mm fixed focus and a 10-20mm very wide angle if anything good came up. The sky still had the fluffy clouds and a nice sunset was still looking promising. 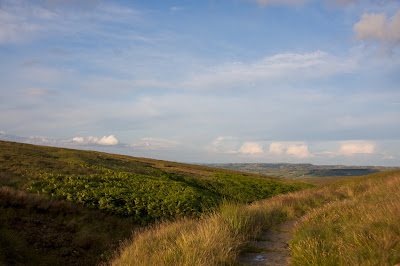 As we started up the ascent to Black Hill some dark clouds started coming over from the Manchester direction (typical) and it wasn't long before the sun was completely hidden. Took a few nice shots of the sun disappearing in the distance at 70mm. No more thoughts that we might get a nice sunset although I quite like the god rays in this shot.

We carried on to the trig point on the top of Black Hill. I took a few more unremarkable shots around the trig point and then we started off back down the hill. It was getting fairly dim by now but I had my torch in case it got completely dark before we got back to the car. As we started off along the path to down the hill I spotted a big bird coming towards us so I got the camera up to my eye and started shooting. Fortunately I still had the 70-300mm on the camera and zoomed in as far as possible to get these images of an Owl. First it was heading straight toward us (I think it had designs on plucking Evey up into the sky) ... 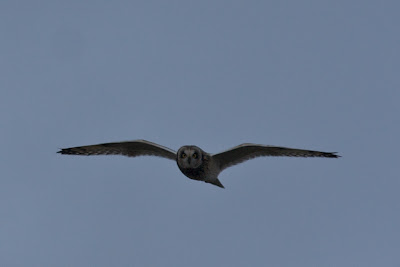 ... and then it turned away and flew back off towards it partner who was away in the distance. I watched them hunting in the distance for quite a while as we continued down the hill. 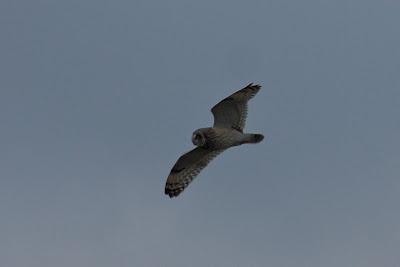 As we continued down the path I spotted this baby rabbit, just sat in the middle of the path, very, very still. I must admit I nearly didn't see it because it was getting very dingey. I fired off a few quick shots because I was expecting to run off at any second. I asked Evey to stay where she was, and surprisingly she did (I don't know whether she'd seen the rabbit, sometimes she's a bit dim). 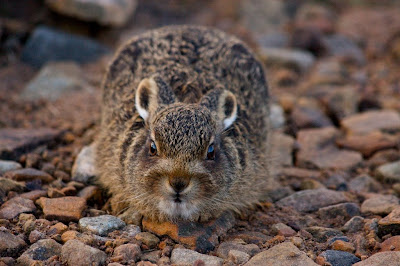 But it didn't run off so I crept around to one side for a few more shots. 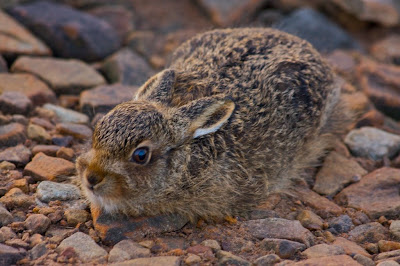 I was concerned that I was taking fairly long telephoto shots (around 200mm) at a very slow shutter speed of 1/15 of a second (even at ISO 800) and that the chances of many of them not being blurred was minimal (about 1 in 5 was usable, which I don't think is bad). So I turned on the on camera flash and hoped to get at least one good shot before the baby rabbit ran away. 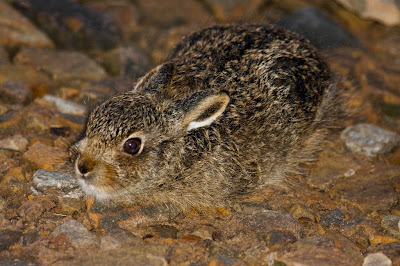 As it turned out the rabbit seemed to be unaffected by the flash so I continued to move around and get closer and zoom in more. I had to remove the red-eye in post processing but this shot is not cropped at all, so the definition in the full size image is amazing. I was so happy with this final shot that my depression was totally (but temporarily) gone. 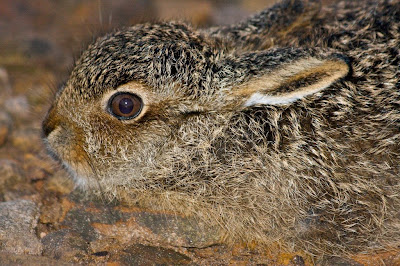 The baby rabbit finally scuttled off and we continued back to the car. A few more shots of the dark sky but nothing of note. Even tried to get a few shots of the distant street lights in Holmfirth with my Lensbaby but I think it was too far away to get anything decent.
at July 26, 2009