When we arrive at Arras on Friday it was quite busy but we found a place to park in the Place de Heroes quite close to the hotel.  If you look closely you might be able to spot my car.  What a beautiful place, the architecture in the square is stunning.  Three sides are filled with buildings as in the photo and the fourth side has the Hotel de Ville (Town Hall).  Our hotel was right in the corner of the square looking out onto the Hotel de Ville.  The hotel owner advised us to move our car to an underground car park in the Grand Place, just around the corner because it was much cheaper and there was a market on Saturday. 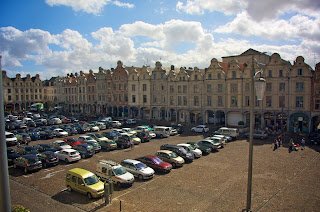 We had a drink, a walk around then got showered and change for dinner.  We went to a Bistro/bar at the other side of the square which, to be honest wasn't terrific but it was quite cheap and filling.  We had plenty to drink and then staggered back across the square back to the hotel for a night cap.  All the buildings were lit up and the moon had just risen above them. 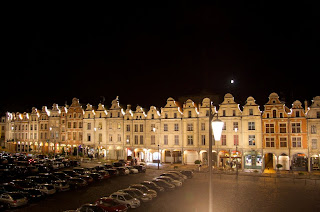 Even from our bedroom window the Hotel de Ville looked magnificent with the enormous clock tower and all the fancy windows in the roof area.  I was just hoping that the chiming of the bells every quarter hour didn't keep me awake like they had in Fougeres.  In the end I think we'd had enough to drink to allow us to sleep through the bells. 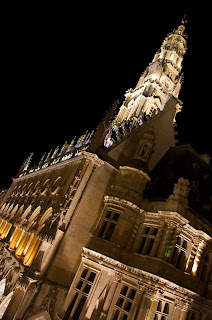 However, very early next morning we were awoken by the market traders setting up their stalls.  It was still dark when they started arriving, first just one or two and then the whole square was full of vehicles ans stalls. 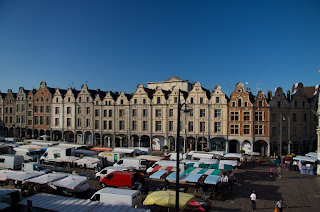 To begin with there didn't seem many punters out doing their shopping and the stall holders were looking pretty bored. 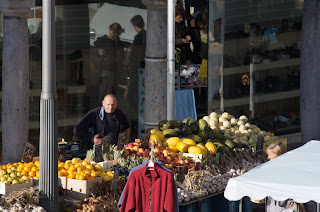 We eventually got up and decided to have a look around.  The market filled the square and stretched out into the surrounding street and also into the Grand Place.  In the Grand Place there was also a big funfair set up although it wasn't open when the market was there.  All the buildings in this square were just the same as in the Place de Heroes.  It's quite amazing that all the buildings look the same yet each one was completely unique. 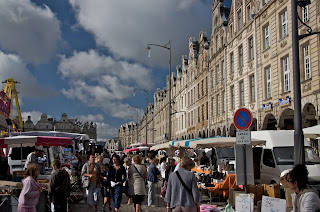 Down one of the side streets was this fish stall which really made me smile. 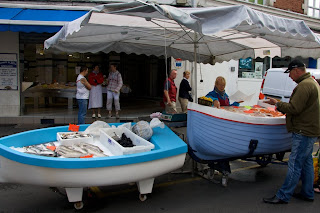 In the afternoon we went for a walk around other parts of the town.  The first place we looked at was the Cathedral which had been almost completely destroyed during the First World War.  There were photographs in the Cathedral showing how little was left of it and how it had been renovated over the next 90 years.  It appeared to be complete although they were still working on the outside.  Most of original stained glass had gone and also the majority of the statues.  This statue was obviusly quite modern but I love its plain simplicity. 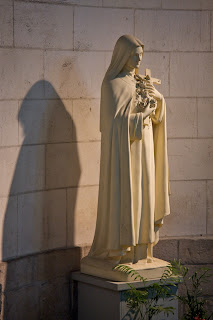 In a side room there was an exhibition of art work and this photo image by Christophe Leleu was amazing.  I spent quite a bit of time looking at this image and wishing that I had the artist ability to do things like this.  Many of the other exhibits were very good, but this was the one that caught my imagination. 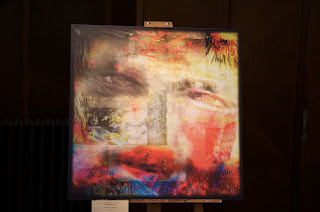 After the Cathedral we went to the Museum and went to an exhibition about Napoleon in Egypt.  We had one of those players that told us what everything was in English and it was very good.   I wasn't allowed to take photos in the museum which I thought was a bit unfair but the staff were watching me very closely because I had my camera slung around my neck.

The rest of the town was fairly uninteresting so we sat outside in the square with a bottle of wine and watched the people go by.  We discovered that there was some kind of fete going on in the square on Sunday, so after the market had packed away there was more activity as they started to set up some different stalls and two stages.  There also seemed to be a lot of strangely dressed people about but I don't know if that was normal for Arras on a Saturday night or if it was to do with the fete. 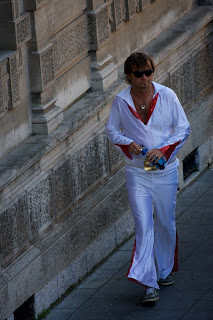 We went to a lovely Italian restaurant for dinner, which was very nice but quite expensive.  After dinner I decided to take some more photos or Arras at night while Lynne watched some television.  From our window we had seen this strange thing being moved about the square so I thought I needed a photo.  So it looks to be Napoleon in Egypt, on a camel, just like at the museum.  How odd. 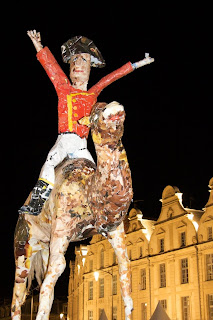 From the far end of the square the Hotel de Ville looked even better all lit up. 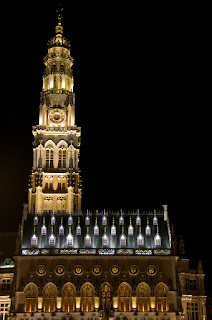 I walked around into the Grand Place to look at the fair and tried to make some action shots of the rides.  I think I like this one the best because of the smoke in the atmosphere and the buildings in the background.  The tower in the background was a church which was up one of the back streets. 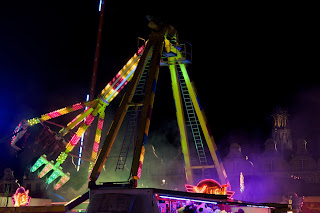 The following morning we had to pack up to head back to the ferry.  There was lots more early work on the stalls in the square and all the bars an restaurants in the square were setting up tables.  It looked like it would have been a good fete.  We had seen some dancers practicing on the stage and there some guys busy setting up the sound system.  As we were leaving some dignitaries were arriving in fancy clothes and there were lots of runners limbering up for a race.  We wish we could have stayed but we had to get back to Calais for the ferry. 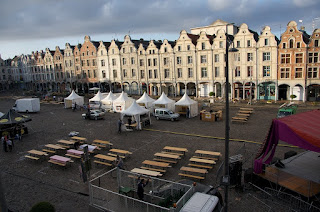 So that was the end of the holiday, it's taken me a while to get through the photos but I did take over 1200 so I don't think it was too bad.  I might just do one more post with a selection of photos that I haven't shown from the holiday.
at October 09, 2009