On Sunday I went to Stanage edge to take some photographs of the landscape and  some of the birds.  In this post I will just show the birds as I took a lot of photos and I haven't finished processing them yet.  It gets quite busy along the edge with the walkers, runners, cyclists and climbers that use this area and so I guess the birds get used to people being around.  A couple of years ago I caught a good image of a grouse perched on top of a rock sticking out of the bracken.  On the moorland above where I live the grouse don't let you get close enough to get any decent shots, I guess they're used to being shot with guns rather than cameras.

In this first image this red grouse was happily chirping away as it sat in the grass.  I chose this picture from the bunch that I took because it had its beak open as it sang. 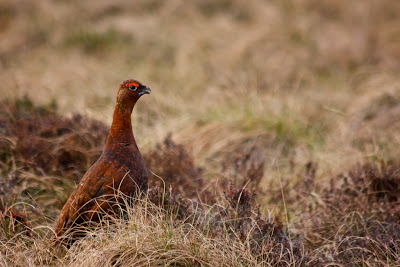 A little further along this next grouse was hopping along all over these rocks and keeping a close eye on me as I moved towards it.  It flew off before I got very close. 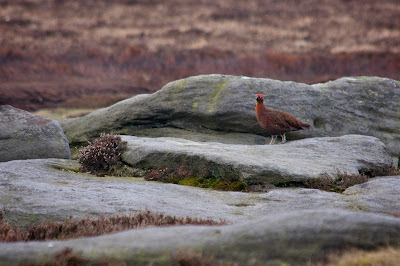 This next one was perched on top of the highest point on a group of rocks looking quite pleased with itself. 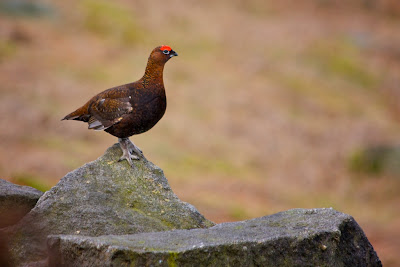 As I was walking along I just caught in the corner of my eye this grouse peering out at me from behind a rock. 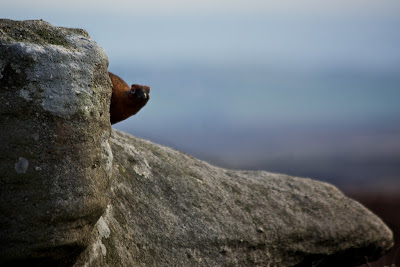 As I moved towards it, it strutted out from behind the rock and into the sunshine to have its photo taken. 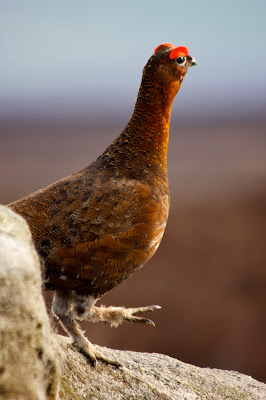 When I got to the furthest point on my walk I was a bird watcher looking down the hillside with his binoculars.  Now in my previous experiences with bird watches they are a very strange bunch, but this guy looked pretty normal so I went over to speak with him.  I asked him what he was watching and he said he was looking at some ring ouzels.  I must admit I thought he was pulling my leg, I always linked the ouzel bird with comedy sketches which were on the television when I was a kid.  He said that I had disturbed a pair of birds as I had walked down the path towards him so I apologised but he said it didn't matter as they would come back once I had gone.

We chatted for a while and then I said I had to move on.  I still wasn't convinced about the ousel bird so I asked him what I should watch out for as I went down the path.  He started to tell me that they looked like blackbirds but with a white bib and then he pulled me towards the edge and pointed to a tree down in the field next to the path.  I put my camera up to my eye and used the long telephoto to get a closer look and I could just make out what he was looking at.  We chatted  bit more and then when we looked at the tree again the bird had gone, he said it's probably just dropped down to the floor to feed.   He said that I should look over the edge as I went past them but I said I didn't want to disturb them any more for him.  He said it's OK they won't go far.

So as I walked down the path I looked over the edge by the tree but I couldn't see the bird, but then about twenty yards further down I spotted the pair of them down in the grass.  The male bird  was perched up on a rock and the female was hopping along the ground. 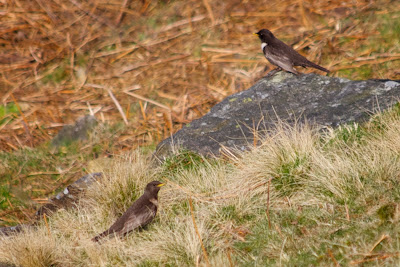 As I watched them the female continued to hop along past the male bird. 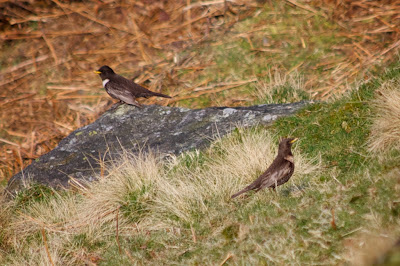 The male bird then flew to a different rock that was a little closer to me where I got this next shot. 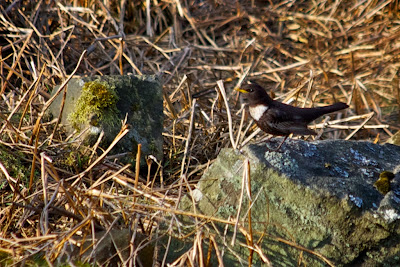 About a couple of miles away from this first sighting I spotted another pair of ring ouzels up in the rocks at the bottom of the ridge where I took this las image of the ouzels. 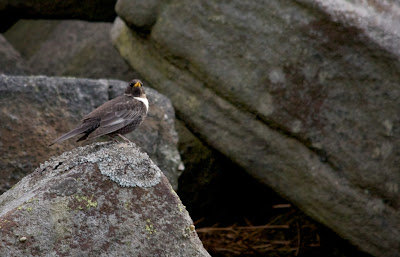 In the rest of the walk the only birds I got close enough to to photograph where the meadow pipits like the ones I had seen last week near Digley reservoir.  There were quite a few of them and they seemed quite keen to have their photograph taken. 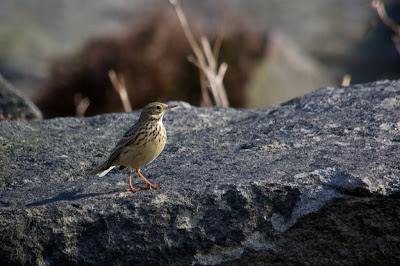 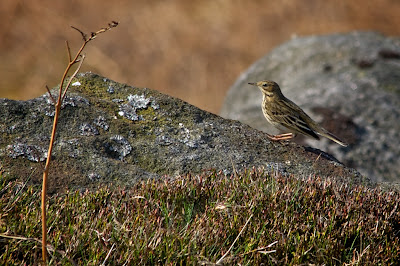 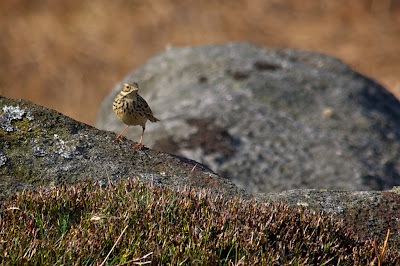 During the walk I had seen some other birds but hadn't managed to take any decent photographs of them.  There was a golden plover running along the grass with what I thought was a young bird.  I mentioned it to the bird watcher but he was doubtful that there would be any chicks yet this year.  I could hear plenty of curlew in the distance but I never caught a glimpse of any.  There was also a hunting bird of some description.  I'd heard it squawking but couldn't spot it.  Then all of a sudden I saw it flying along quite close to the ground.  I wasn't close enough to identify what it was and I took some photos but they were too blurred to make anything out.

Next time I'll post some landscape photos.  Although the weather had seemed promising when I set off from home it was quite variable while I was walking so there is a pretty mixed bunch.
at April 22, 2010