It's almost exactly a year ago that I made a rant on my blog about why I'm not a wildlife photographer, yet one year on here I am with a post using birdwatching in the title.  Not only that, but in the last twelve months I have posted many images of animals and birds on my blog and also have hundreds more that haven't been posted.  So what's changed?  Well, nothing really.  I still think that birdwatchers are weird and I still can't justify spending thousands of pounds on big telephoto lenses, but there's just something about seeing and photographing birds and animals in their environment.  Even if I had an inexhaustible amount of spare cash and spare time I still don't think could go down this route, but I always enjoy doing something different and trying to get better at it.

So Sunday morning I set off fairly early with the intention of photographing Curlew and Lapwing up on the fields and meadows above Digley Reservoir.  I've made photographs of these birds here last year and have been waiting for them to arrive this summer from wherever they go in the winter.  Although it was quite nice when I set off the low cloud on the top of the Pennines made it quite foggy where I was heading.  I had arranged to pop into Mosley to drop off my daughters phone charger which she had left at our house so I carried on along the A635, dropped off the charger and then came back.  Luckily the cloud had lifted enough for me to stop and seek out the birds.

I parked in a little lay by near an old lane (Magdalen Road) where I have seen Curlew and Lapwing before.  I could hear the birds I was searching for and also the grouse who live here all year around.  My first sighting was of a couple of grouse sat on the wall and I managed to get this first image before they flew off. 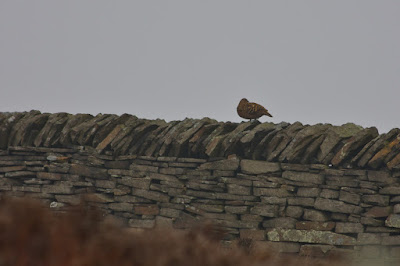 I could see a few Curlew and Lapwing in the distance so I headed toward them.  Sometimes they land in the fields and wander around so I kept looking over the walls to see if I could spot any.  But all I could see was this little rabbit sat at the edge of the field. 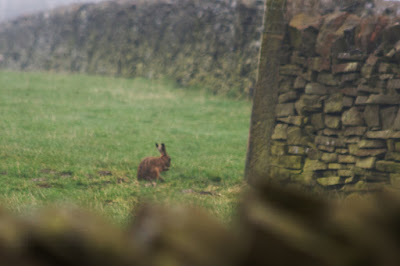 I guess the birds were being a bit shy today because as I walked down the track they got further away.  So I started walking back to the road when I spotted one of the Curlew land in the field.  I sneaked up quietly and managed to get quite a few shots of it wandering across the field and occasionally pecking at the ground. 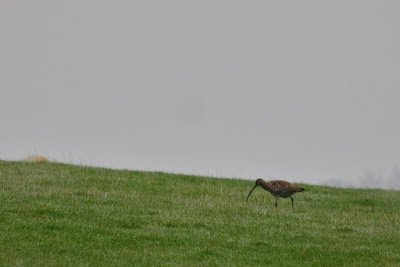 I carried on back to the road and then went down another track at the other side (Springs Road).  When I first parked the car I had seen some lapwing flying about down this side of the road so I went looking for them.  I could see a pair of them flitting around but they move so fast and randomly in the air they are quite hard to catch.  Here's a little clip of the pair flying around.
I took lots of shots that just didn't turn out right.  I made the same mistake as before by not having a fast enough shutter speed to get shots that weren't blurred.  Eventually I got a few acceptable shots so here are a couple of the pair in flight. 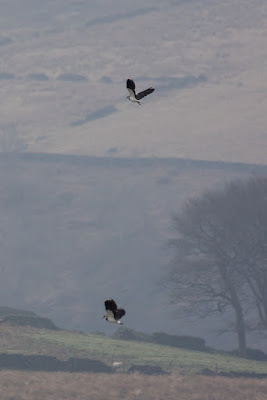 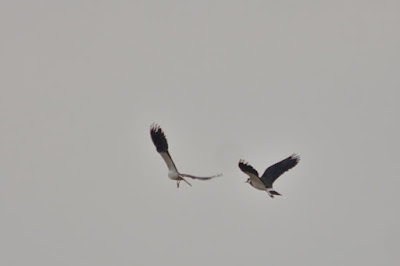 One of the Lapwing landed in the field behind me so I set off towards it to see if I could get a better shot of it.  It was too far off and I could tell that if I headed towards it then it would just fly off.  I turned around and there behind me was this little Wheatear sat on the wall.  I took quite a few shots of it before it left but I liked this one the most because there is just a hint of catchlight in its eye.  (click to get a bigger picture).  From the colouring of this bird it is either a female or a juvenile, the male is more of a grey/blue colour. 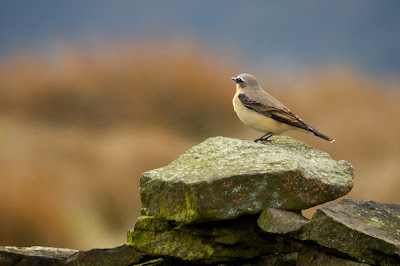 When it flew off it went to join up with another three of its friends.  I followed it and managed to get these next two shots.  Essentially they are the same shot but on the first one the male bird at the back is in focus and on the second the female at the front is in focus.  I think it might be possible to merge these in Photoshop to get them both in focus in one image but then there would still have a blurred bit in the middle. 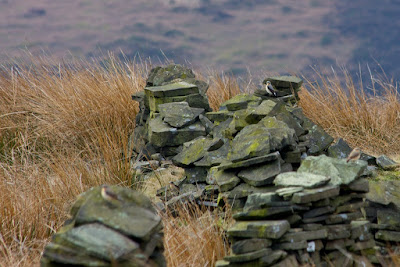 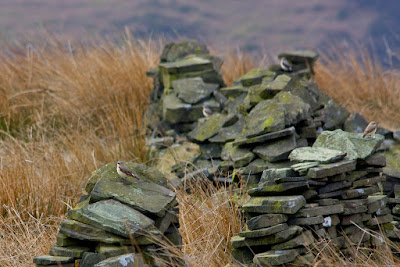 As I headed back towards the road this little Meadow Pipit stood on the wall posing for its photo taking. I have a few pictures of these little precocious birds over the last year or so.  One of them with Evey the dog about a foot away from it and another with the bird stood on top of a post with a beak full of insects.  I had only identified them as little brown birds before but this time I think I have an accurate id. 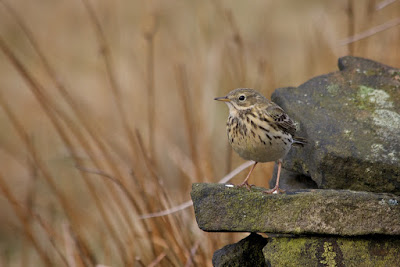 So there we are, a couple of hours sat in a field trying to get pictures of birds then home for breakfast.  Not a bad life really.  Could I have got some better shots with a £7000 lens?  Yes probably.  Would I still be married?  Possibly not, who knows.
at April 15, 2010