I know, I have posted lots of times from the Yorkshire Sculpture Park but it's one of my favourite places to visit and it's only a twenty minute drive from my house.  Last week I set off early to the park hoping to get lots of photos before the park got too busy.  I ended up being there for about five hours taking photos of the trees, flowers, birds, lakes and sculptures.  I took a few hundred photos altogether but many were duplicates or different angles of the the same subject.  I did end up with quite a number of keepers in the end though and will probably get around to posting some of them over the next few weeks.

In this post I am going to limit the photos to the sculptures as they are one of the main attractions at the park.  I have shown some of the sculptures in previous posts as some of them have been there for a few years, but these are all new photos taken on a very hot and sunny morning.  I don't have details of all of the sculptures but I'll include anything I know (or look up).

This first one is unmistakably an Antony Gormley piece and is from the One & Other series from 2000.  The figure is placed high on the top of an old dead tree near the bridge between the upper and lower lakes of the park.  I seem to remember there being more than one of these figures in the park but this is the only one I saw during the visit. 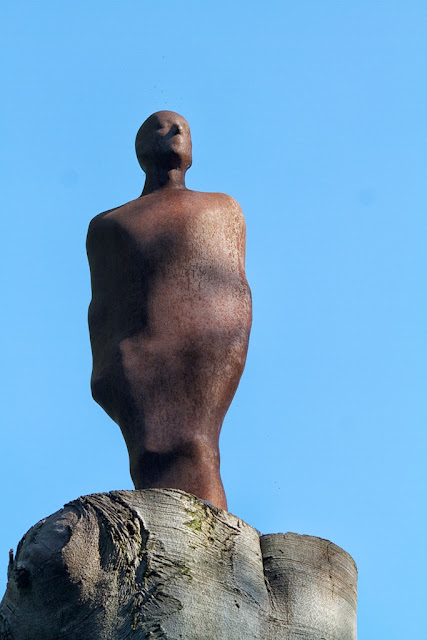 The next piece is by Jem Finer.  I just love the way it reflects the surroundings and the sky and is itself reflected in the water of the lake.. 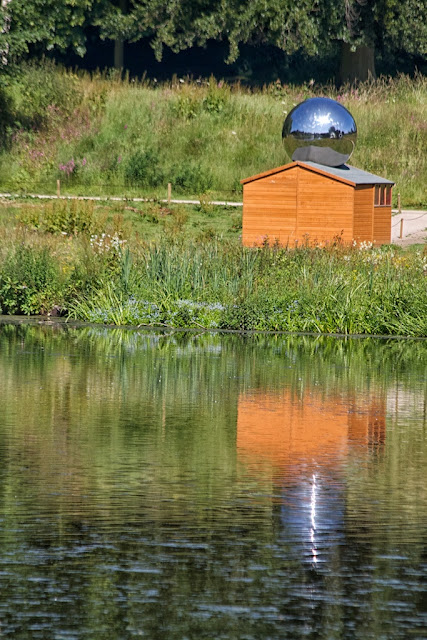 This is by Anthony Caro and has been in the park for many years.  It did disappear for a while but has returned and has had a new hard standing area to sit on.  I think maybe it has been cleaned as well while it's been away because it looks very fresh.   I'm wondering now if it's a new piece in place of what was here before.  I'll have to look back at my old photos to check. 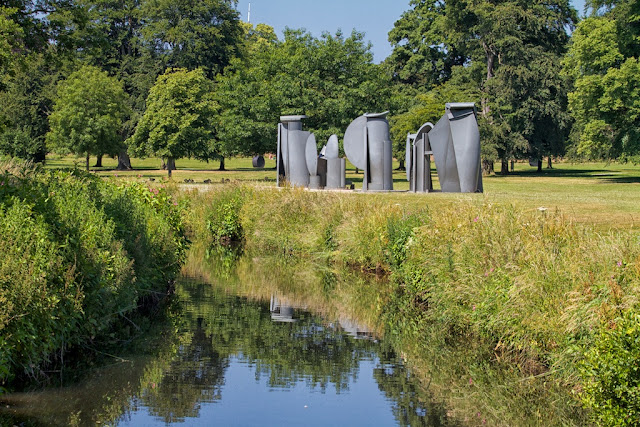 I don't remember what this piece is and I haven't found any information about it.  I just like that it sort of mirrors some of the shapes in the Bretton Hall building in the background. 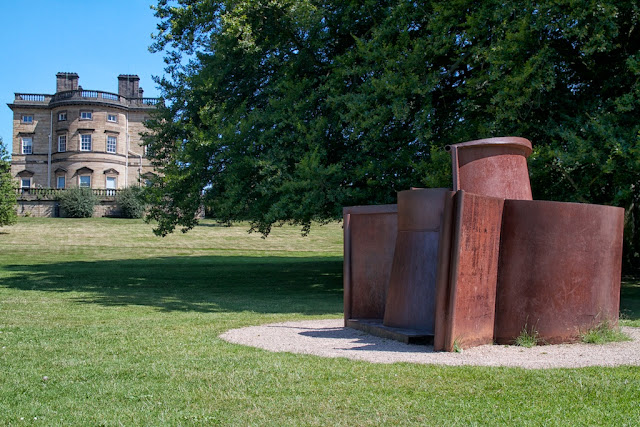 This is called "The Kiss" by Nigel Hall and it is very red. 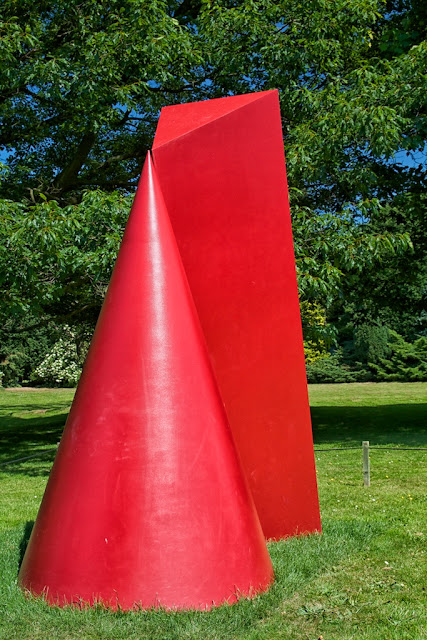 This very large rabbit is by Sophie Ryder and again it has featured in a previous blog post from when there were a lot more of her sculptures in the park. 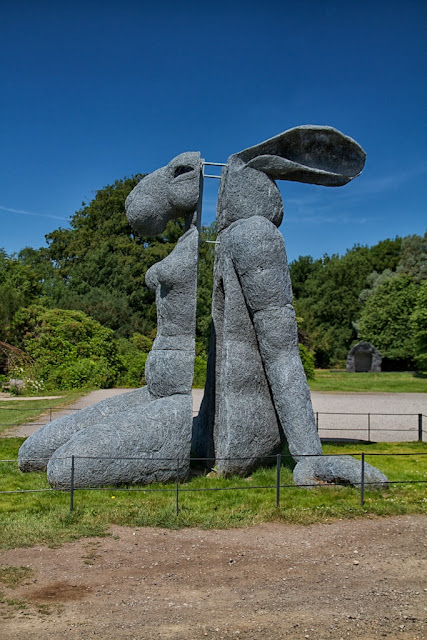 The next photo is a sculpture by Polish artist Magdalena Abakanowicz and has been in the park a couple of years. 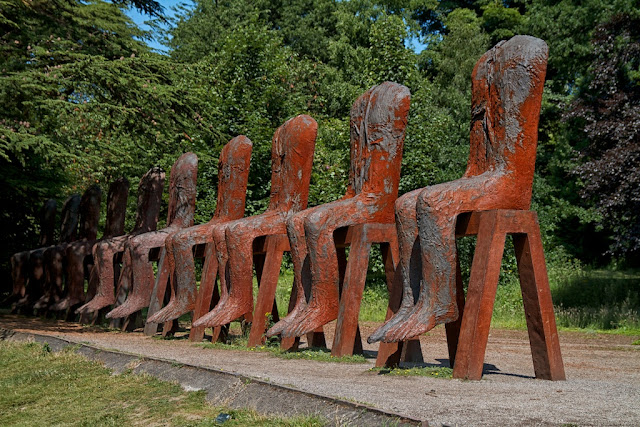 I don't thinkI've seen this one before so I guess it might be new.  It was made by French artist Niki de Saint Phalle, although I thought it looked very Indian or other Asian in influence.  The sculpture was in the shade of the trees but the sun was just on the hands and I was able to get into a position to get this sun burst from a shiny gold bit. 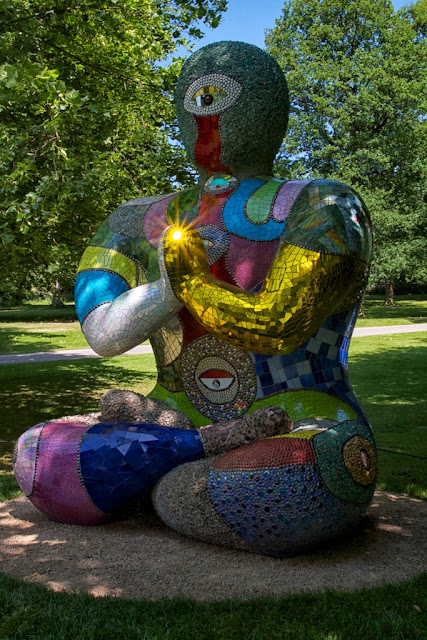 Here are a couple of photos of some Jean Miro sculptures which are from a major exhibition a year or two ago.  I have a blog post from the time with more work from this artist. 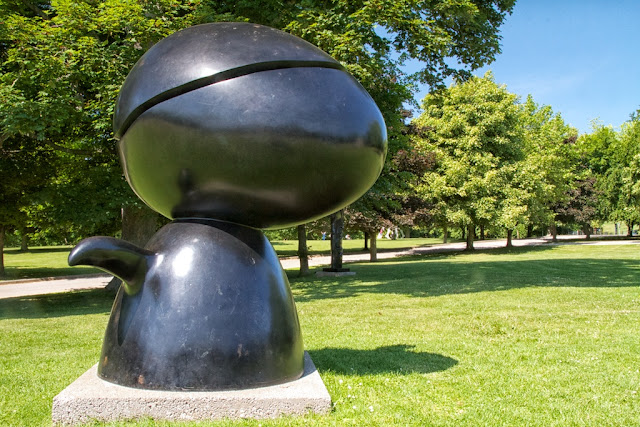 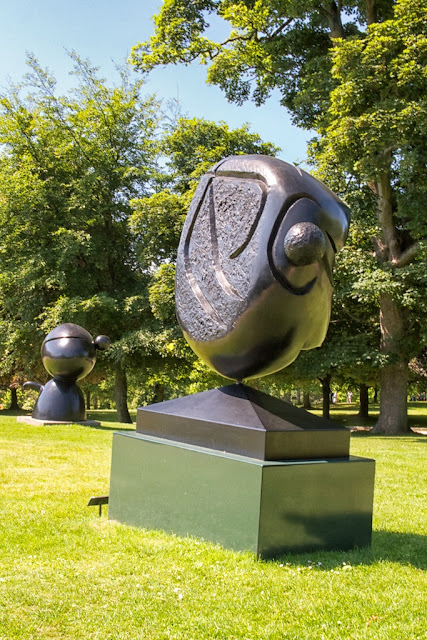 Finally three views of one of the Yinka Shonibare MBE wind sculptures which is part of the current major exhibition at the park.  See my previous blog post about him here if you want to see more. 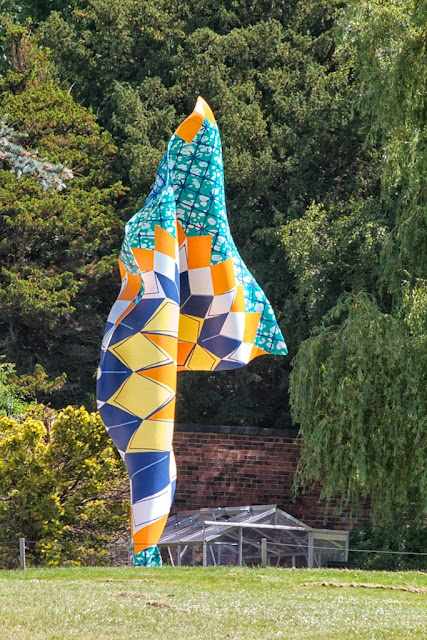 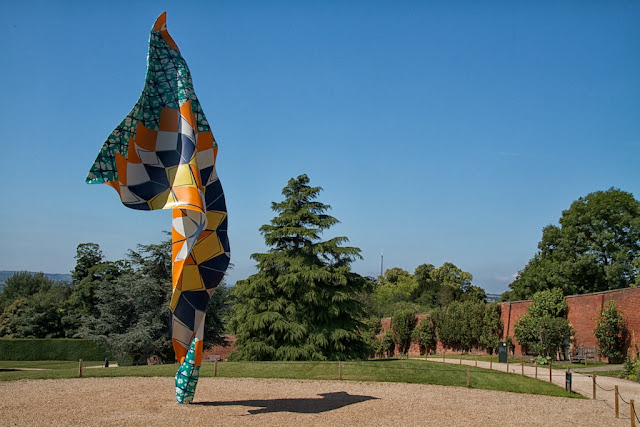 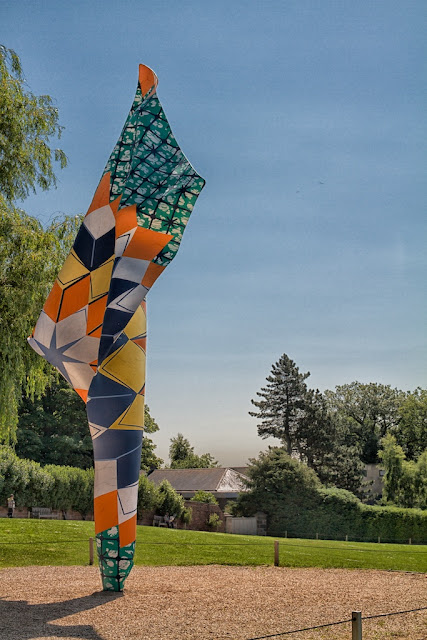