The day after the snowbound trek over Holme Moss I took my youngest daughter and her boyfriend to Dovestones. It's a pretty gentle walk on mainly good paths so it was quite easy going after the previous days exersions. There are four reservoirs here. Dovestones is the main one, then further up this valley is Yeoman Hey and the Greenfield. The last reservoir is a way up the other valley up the old Chew Road. We just went around the first two reservoirs on this visit.

It was a nice bright morning and the first three photos are from more or less the same spot showing some nice relections in the still water of Dovestones reservoir. 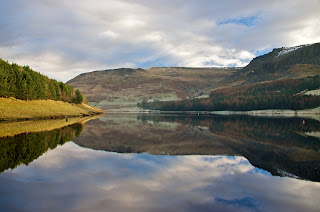 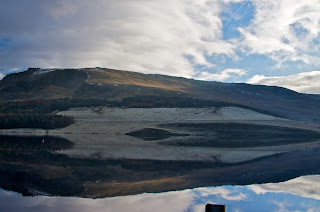 Looking up Chew valley where there is a road that takes you up onto the top where the fourth reservoir is found. 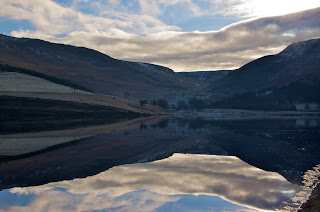 The bank on the south side of the reservoir was in the shade and the grass had a good covering of frost on it from the cold night. The next photo is one of the channels that bring water to the Dovestones reservoir. The source of this channel is actually from the third reservoir, Greenfield, and goes through a tunnel in the hillside next to Yeoman Hey reservoir then comes out above the weir that can be seen in the distance. During the summer when the water is low it is possible (although not permissable) to walk through the tunnel. 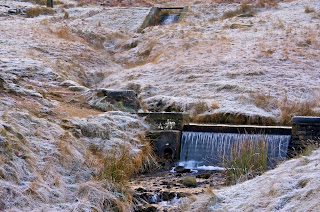 This last photo is looking across Yeoman Hey reservoir up to the edge of the Peak District above Greenfield village. There is a path that goes up to the top which I intend to follow one day because I think the view will be quite stunning. I have previously climbed up to the top of the ridge on the south side of the reservoirs which you can see in the first couple of photos and it was extremely windy that day. 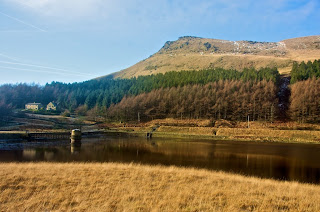