I guess this is my favourite local place to photograph sunrises. I have some from earlier in the year or maybe last year where the sky was beautiful and the water was perfectly still so the reflections were almost perfect. Today the sky is good but it's very windy so the reflections aren't their best. All of the photos today are from more or less the same place, just moved around a little and tried different heights, magnification and exposure settings.

When I shot this first photo it was still pretty dark and the exposure time was set to 30 seconds which has really exaggerated all of the colours in the sky. I like this spot for making the photograph because it has the old bit of tree stump in the foreground. I tried using the flash to put some detail into the foreground but I think it looks better without any detail and the tree sump as a silhouette. 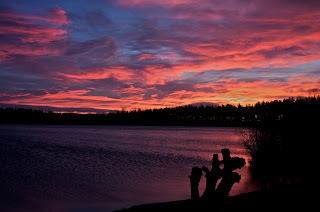 Again it was still quite dark and the long exposure makes the colours very rich. I had my daughters dog with me and on a couple of the long exposure photographs it had run into the shot and then moved off after a few seconds leaving a ghost dog in the picture. 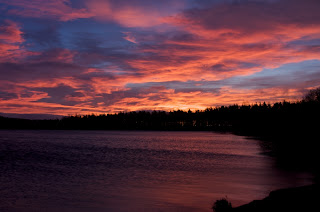 Here I put a telephoto lens on the camera to zoom in to the brightest part of the sky just above the trees. It was a little later so the sky was a bit brighter and turning more yellowy. 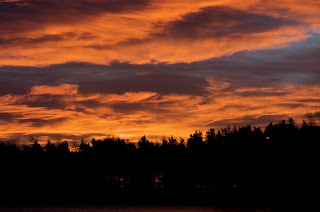 Changed to a very wide angle lens to capture a big area of the sky. The previous photo was just the little bright patch where the sun is coming up directly above the tree stump in this photo. 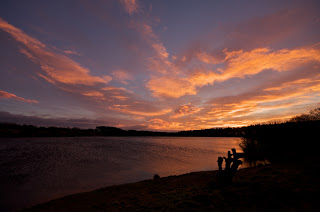 Last photo back to a normal lens length and quite a bit later. The sky was a lot brighter so the exposure was down to less than a second by now. The colours on the photo are more like how they looked when I was there and some blackish clouds are starting to come over. We set of home shortly after this and it started to rain just as we got back to the car. When we got home the weather was quite miserable so I'm glad we went out early to capture the best of the day. 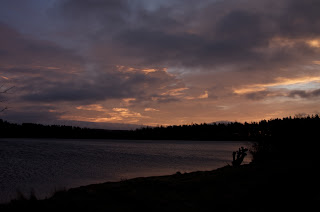