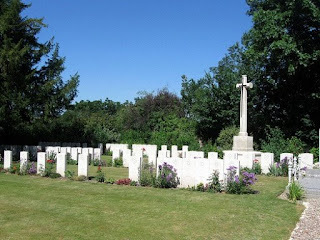 We left the gite and visited a few places on the way to Villaines la Juhel which were recommended by the eyewitness guide to the Loire. We weren't too impressed, the first was a small town that nothing out of the ordinary, then there was a big monastery which would have been OK if they actually allowed access to more than the church. Although the church itself did have some amazing carvings but as usual I couldn't take photos, had to buy a couple of postcards. The next place to visit we didn't even get out of the car so we just carried onto the hotel.

It was very hot again on the way so we had to shower as soon as we got to the hotel. There was a pizzeria on site so we decided to go there instead of venturing out again in the car. The food was very good, we had a lot of wine and when we left the barman insisted that we join him in a shot of calvados for his birthday.

Today we moved onto Poix near Amiens. As usual we took an unexpected detour around Rouen, I think we get lost every time we get anywhere near the place. Finally arrived and the hotel is quite nice, there is a bar and restaurant in the hotel so we may well eat here tonight. We went for a walk around the town and there's nothing much to see although we did visit the local ancient church. In the attached cemetery we were surprised to find a plot of World War Two war graves of commonwealth airmen. There were almost one hundred graves and there was a big plaque explaining all about why they were there. Many of the airmen were Canadian, Australian and from New Zealand but most were from the UK. The photo attached was taken in early July this year and looks exactly as it did today.

Apparently there is a three day festival of hot air balloons going on here and some of the balloonists are in the hotel. We've found some information on the interweb that there are eleven balloons which is far less than the hundred and fifty plus that we saw last year at the chateau at Brissac. Lynne just picked up a brochure in the bar with the itinerary and tonight is the inauguration so we'll give that a miss. Tomorrow they're doing a competition during the day and then in the evening they are at the nearby racecourse when they are doing a blowing up the balloons and there is a concert by 'Un Notre Parfum' from Rouen followed by fireworks. We might go to that although it depends when we get back from Amiens. There is another competition Sunday morning and something else in the evening but we will be heading back to Calais so will miss it.